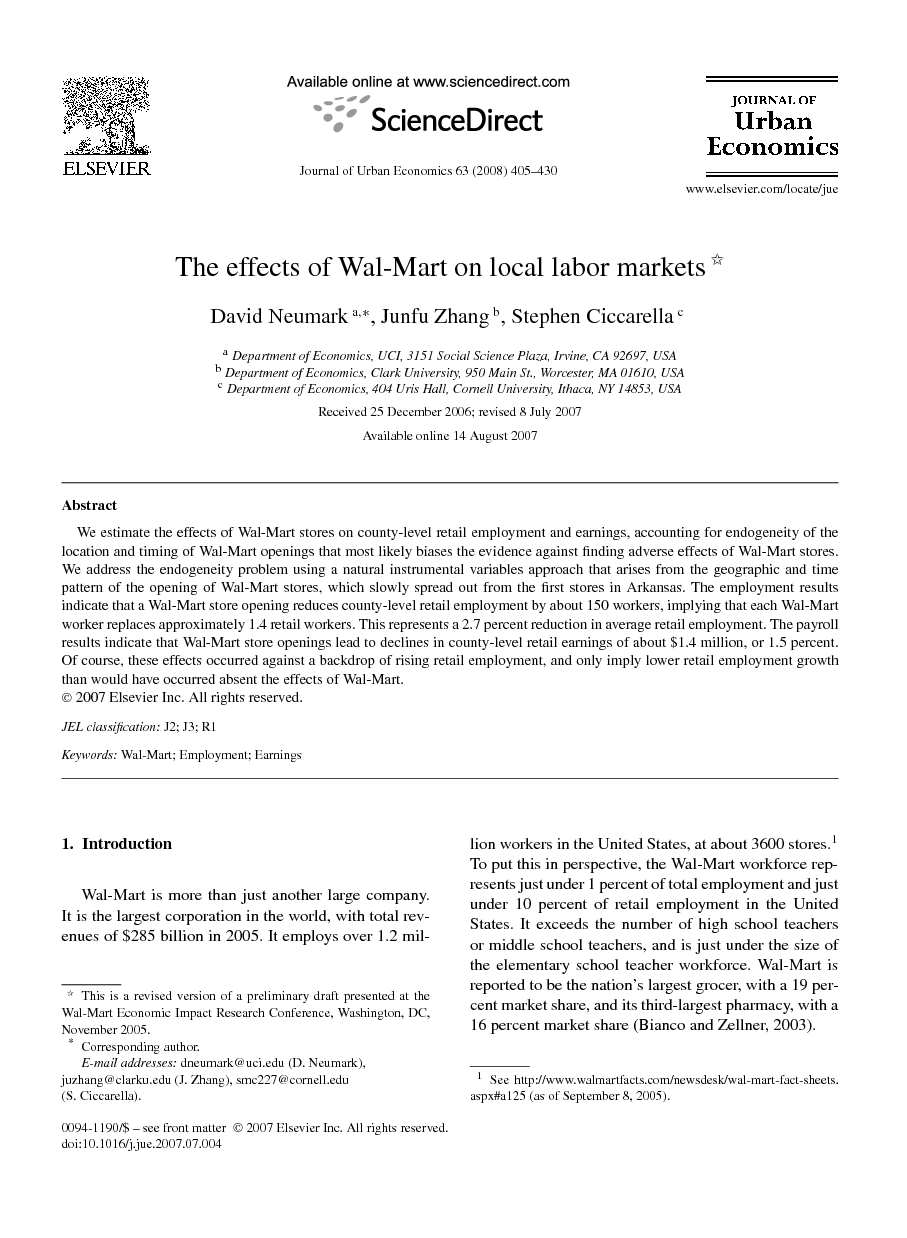 Motivated in large part by local policy debates over Wal-Mart store openings, and the large size of Wal- Mart relative to the retail sector, we estimate the effects of Wal-Mart stores on retail employment and earnings. Critics have charged thatWal-Mart’s entry into local labor markets reduces employment and wages, and the company (and others) have countered that these claims are false, and touted Wal-Mart’s retail job creation effects. Our analysis emphasizes the importance of accounting for the endogeneity of the location and timing of Wal-Mart openings that—in our view, and as borne out by the data—is most likely to bias the evidence against finding adverse effects of Wal-Mart stores. Our strategy for addressing the endogeneity problem is based on a natural instrumental variables approach that arises because of the geographic and time pattern of the opening of Wal-Mart stores, which slowly spread out in a wavelike fashion from the first stores in Arkansas. The findings in this paper rather strongly belie claims, as well as recent research findings, suggesting that Wal-Mart store openings lead to increased retail employment. On average, Wal-Mart store openings reduce retail employment by about 2.7 percent, implying that each Wal-Mart employee replaces about 1.4 employees in the rest of the retail sector. Driven in part by the employment declines, retail earnings at the county level also decline as a result ofWal-Mart entry, by about 1.5 percent. It is harder to draw any firm conclusions regarding the effects of Wal-Mart on wages, although the data do not provide any indication that retail earnings per worker are affected by Wal-Mart openings. Note that the estimated adverse effects on retail employment do not imply that the growth of Wal-Mart has resulted in lower absolute levels of retail employment. Like in all studies of this type, the estimates are relative to a counterfactual of what would have happened to retail employment absent the effects of Wal- Mart. From 1961, the year before the first Wal-Mart store opened, through 2004, the last full year for which we have a count of the Wal-Mart Discount Stores and Supercenters, retail employment in the United States grew from 5.56 million to 15.06 million, or 271 percent, considerably faster than overall employment (242 percent). 48 If each of the 3066 stores present in January of 2005 reduced retail employment by our estimate of 146 workers (Table 4, column (4)) relative to the counterfactual, then our estimates imply that, in the absence of Wal-Mart, retail employment would have instead grown to 15.51 million as of 2004, or 3 percent higher than the observed figure. So the negative employment effects of Wal-Mart that we estimate simply imply that retail employment growth was a bit more modest than it would otherwise have been, growing by 271 percent from 1961 through 2004, rather than 279 percent. The estimates do imply, however, that retail employment is lower than it would have been in counties thatWal-Mart entered, and hence that Wal-Mart has negative rather than positive effects on net job creation in the retail sector. The lower retail employment associated with Wal- Mart does not necessarily imply that Wal-Mart stores worsen the economic fortunes of residents of the markets that these stores enter. Our results apply only to the retail sector, and we suspect that there are not aggregate employment effects, at least in the longer run, as labor shifts to other uses. Wage effects are more plausible, although these may operate more on the manufacturing side through the buying power that Wal-Mart exerts, as opposed to the retail side which is a low-wage sector regardless of Wal-Mart—although there are exceptions such as relatively highly-paid grocery workers who may be harmed from competition with Supercenters. If there are wage (or employment) effects that arise through cost pressures onWal-Mart’s suppliers, however, they would not necessarily be concentrated in the counties in which stores open, so that our methods would not identify them. Moreover, Wal-Mart entry may also result in lower prices that increase purchasing power, and if prices are lowered not just at Wal-Mart but elsewhere as well, the gains to consumers may be widespread. Furthermore, the gains may be larger for lower-income families (Hausman and Leibtag, 2005), although it is also possible that labor market consequences for these families are also more adverse. Another line of criticism of Wal-Mart is that through lowering wages it increases the burden on taxpayers by increasing eligibility for and receipt of government benefits. 49 However, a key implicit assumption is that in the absence of Wal-Mart, employees of the company would have higher-paying jobs, rather than, for example, no jobs. Thus, the validity of this criticism hinges on whether Wal-Mart’s entry into a labor market affects overall employment and wages. It is also worth pointing out that if Wal-Mart causes both earnings and price declines for low-income families, then taxpayer burden could increase even if the price declines more than offset the earnings declines for these families, because government programs are typically tied to earnings. Thus, aside from the question of employment effects, there are numerous remaining questions of considerable interest regarding the effects of Wal-Mart on labor markets and goods markets, on consumption, and on social program participation and expense. In addition, of course, there are non-economic issues that play a role in the debate over Wal-Mart, such as preferences for downtown shopping districts versus suburban malls. The identification strategy developed in this paper may prove helpful in estimating the effects of Wal- Mart stores on some of these other outcomes as well.