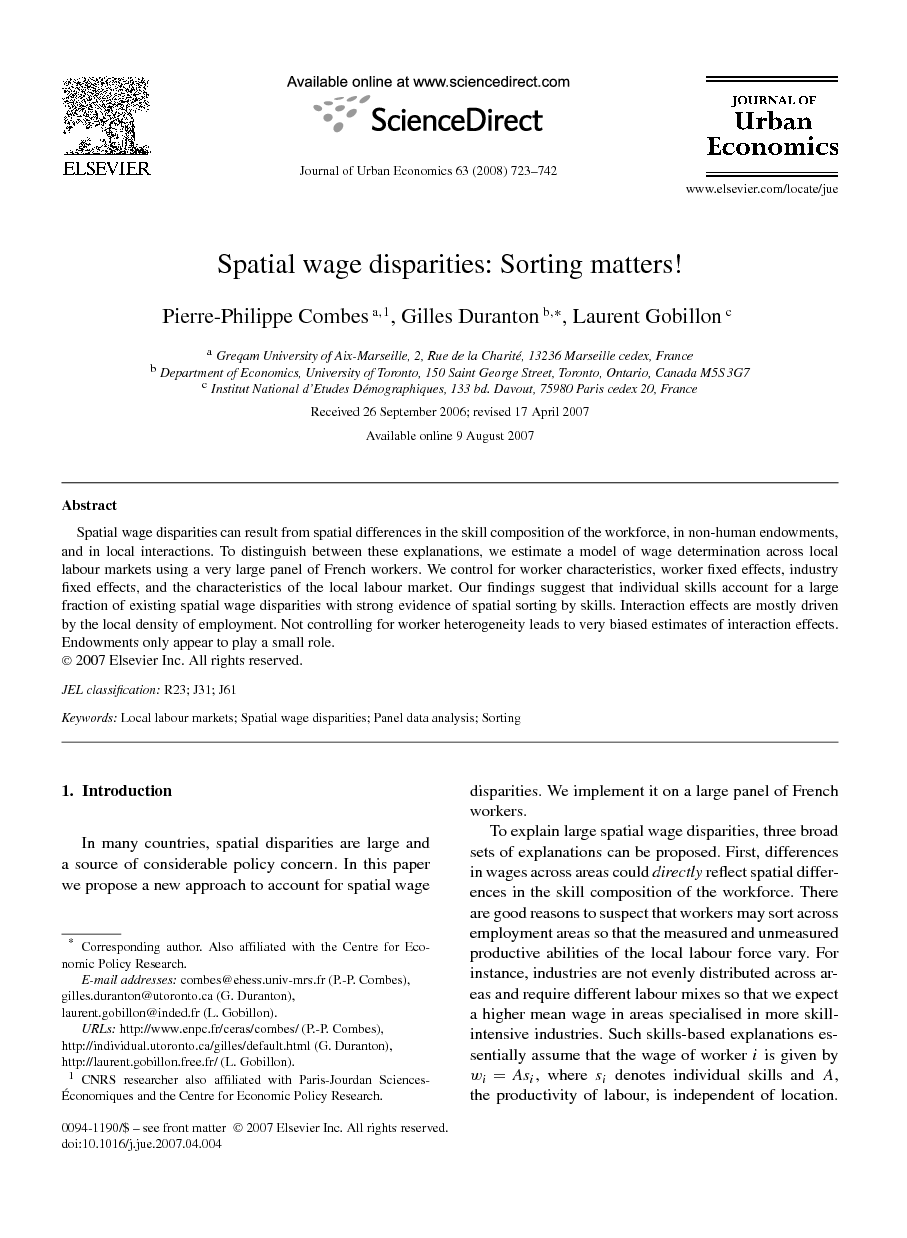 Spatial wage disparities can result from spatial differences in the skill composition of the workforce, in non-human endowments, and in local interactions. To distinguish between these explanations, we estimate a model of wage determination across local labour markets using a very large panel of French workers. We control for worker characteristics, worker fixed effects, industry fixed effects, and the characteristics of the local labour market. Our findings suggest that individual skills account for a large fraction of existing spatial wage disparities with strong evidence of spatial sorting by skills. Interaction effects are mostly driven by the local density of employment. Not controlling for worker heterogeneity leads to very biased estimates of interaction effects. Endowments only appear to play a small role.

investigate the sources of wage disparities across local labour markets: skills, endowments and within- and betweenindustry interactions. This framework unites different strands of literature that were so far mostly disjoint. It shows that the research about the ‘estimation of agglomeration economies’ is closely intertwined with those dealing with ‘regional disparities’, ‘local labour markets’ and ‘migration’. Empirically, the main novelty of the paper is to use a very large panel of workers and a consistent approach to exploit it. This allows us to assess precisely the effects of unobserved worker heterogeneity. We find that the effect of individual skills is quantitatively very important in the data. Up to half of the spatial wage disparities can be traced back to differences in the skill composition of the workforce. Workers with better labour market characteristics tend to agglomerate in the larger, denser and more skilled local labour market.We believe more work is now needed to understand the nature of this sorting.We also pay considerable attention to the issues of simultaneity. When correcting for possible biases, our estimates for economies of density, at around 3.0%,are lower than in previous literature. Nonetheless, economies of density still play an important role in explaining differences in local wages. We find that the market potential also matters. The evidence on other types of local interactions such as those taking place within particular industries is more mixed. They are significant but do not matter much quantitatively in explaining local wages disparities. Our approach also suggests at best a modest direct role for local non-human endowments in the determination of local wages.