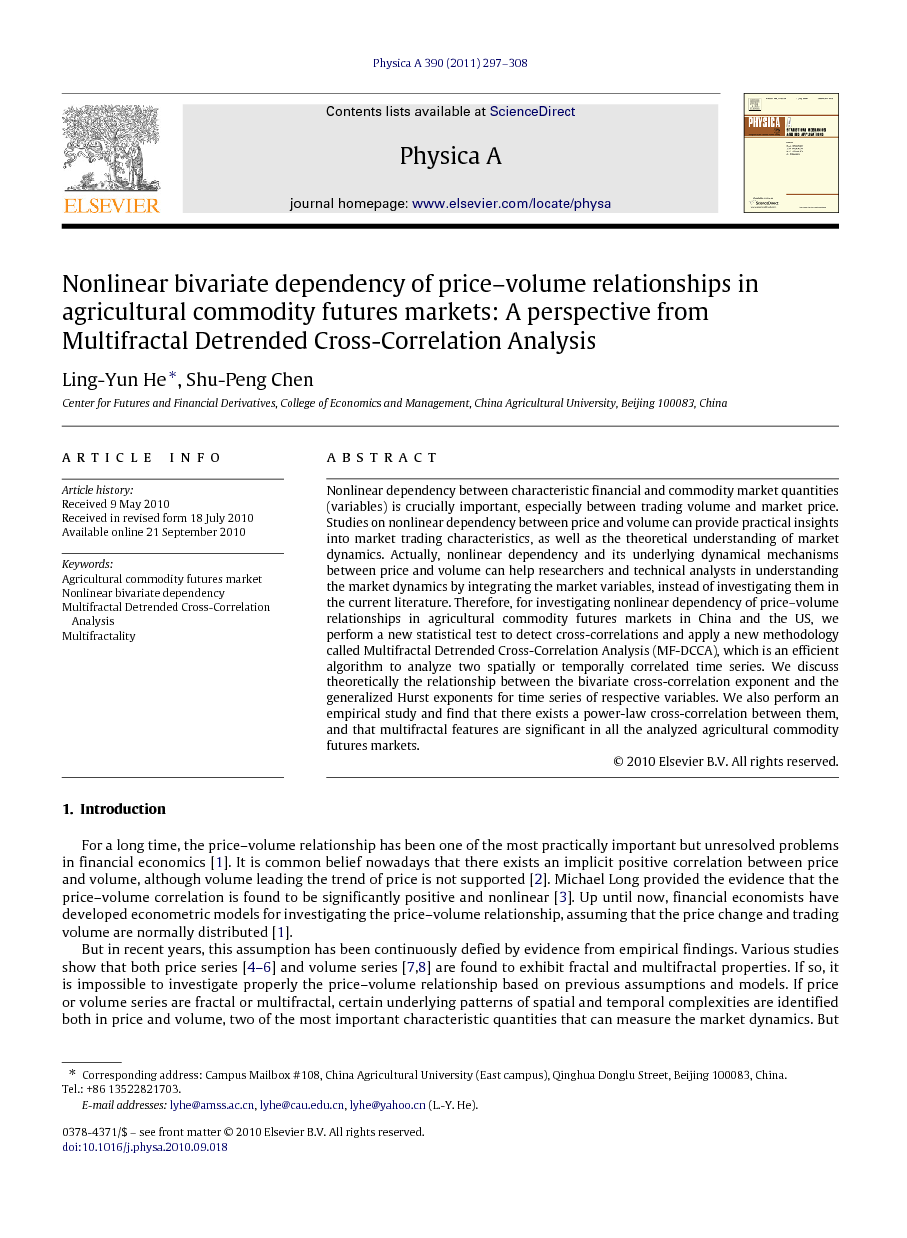 Nonlinear dependency between characteristic financial and commodity market quantities (variables) is crucially important, especially between trading volume and market price. Studies on nonlinear dependency between price and volume can provide practical insights into market trading characteristics, as well as the theoretical understanding of market dynamics. Actually, nonlinear dependency and its underlying dynamical mechanisms between price and volume can help researchers and technical analysts in understanding the market dynamics by integrating the market variables, instead of investigating them in the current literature. Therefore, for investigating nonlinear dependency of price–volume relationships in agricultural commodity futures markets in China and the US, we perform a new statistical test to detect cross-correlations and apply a new methodology called Multifractal Detrended Cross-Correlation Analysis (MF-DCCA), which is an efficient algorithm to analyze two spatially or temporally correlated time series. We discuss theoretically the relationship between the bivariate cross-correlation exponent and the generalized Hurst exponents for time series of respective variables. We also perform an empirical study and find that there exists a power-law cross-correlation between them, and that multifractal features are significant in all the analyzed agricultural commodity futures markets.

For a long time, the price–volume relationship has been one of the most practically important but unresolved problems in financial economics [1]. It is common belief nowadays that there exists an implicit positive correlation between price and volume, although volume leading the trend of price is not supported [2]. Michael Long provided the evidence that the price–volume correlation is found to be significantly positive and nonlinear [3]. Up until now, financial economists have developed econometric models for investigating the price–volume relationship, assuming that the price change and trading volume are normally distributed [1]. But in recent years, this assumption has been continuously defied by evidence from empirical findings. Various studies show that both price series [4], [5] and [6] and volume series [7] and [8] are found to exhibit fractal and multifractal properties. If so, it is impossible to investigate properly the price–volume relationship based on previous assumptions and models. If price or volume series are fractal or multifractal, certain underlying patterns of spatial and temporal complexities are identified both in price and volume, two of the most important characteristic quantities that can measure the market dynamics. But in the current literature, these two temporally correlated series are usually discussed separately, and few results could be found, except for the first attempt by Podobnik et al. who successfully incorporated and investigated price changes and volume changes for the S&P 500 index by means of cross-correlations [4]. It is crucially important to investigate the relationships between the two variables since both are the joint products of the same market mechanisms; therefore, discussion on one of these variables cannot be complete without incorporating the other variable. After all, prices and volumes are recorded simultaneously and are the results of the same trading activities (e.g. buy or sell orders) driven by the same market mechanisms or the same information flows. Many scientists attempted to uncover the patterns and their formation mechanisms, and provided empirical evidence about the existence of fractals or multifractals in agricultural futures markets either in China or the US. For instance, Corazza et al. studied the six main US agricultural futures markets and found the existence of fractals [5]; similar findings illustrate that China’s agricultural futures markets are also chaotic [6] and multifractal [7] and [8]. Unfortunately, studies in the current literature failed to realize that many of the markets’ characteristic quantities (or variables), e.g. price and volume, are actually spatially and/or temporally correlated, so that they merely discussed these quantities (or variables) individually instead of incorporating them and analyzing their cross-correlated relationships. Therefore, the results from the previous research may be biased for their ignorance of the complex cross-correlations between those highly interacted and correlated variables. In recent years, many researchers attempted to investigate cross-correlations between real systems. Plerou et al. applied methods of random matrix theory to analyze the cross-correlation matrix of price changes in the largest 1000 US stocks [9]. Richman and Moorman measured the similarity of two distinct physiological time series by means of cross approximation entropy and cross sample entropy [10]. Pincus and Kalman also applied approximate entropy to analyze the financial data [11]. The cross-correlations are also investigated in stocks [12], [13] and [14] and currency markets [15]. Previous studies that dealt with cross-correlations are based on the dubious assumption that both of the analyzed time series are stationary. But unfortunately, in the real world, especially in the case of economic and financial markets, the time series are usually nonstationary; therefore, the approaches in the current literature may lead to a spurious detection of auto-correlation and cross-correlation. Jun et al. proposed a detrended cross-correlation approach to quantify the correlations between positive and negative fluctuations in a single time series [16]. Based on the previous study, Podobnik and Stanley proposed Detrended Cross-Correlation Analysis (DCCA) for investigating power-law cross-correlations between two simultaneously recorded time series in the presence of nonstationarity [17]. To unveil multifractal features of two cross-correlated nonstationary signals, Zhou proposed Multifractal Detrended Cross-Correlation Analysis (MF-DCCA) by combining Multifractal Detrended Fluctuation Analysis (MF-DFA) and DCCA approaches [18]. Therefore, we applied Detrended Cross-Correlation Analysis, a new method first proposed by Boris Podobnik and Eugene Stanley [17] and then improved by Zhou [18], for investigating the cross-correlation between two characteristic quantities, namely, price–volume relationships in our context, in agricultural commodity markets, i.e. hard winter wheat, soy meal, soybean and corn, in China and the US. We arrive at the following nontrivial conclusions: first, nonlinear dependency and power-law cross-correlation are found in all price–volume relationships for all these futures markets; second, the bivariate cross-correlation exponent is less than the average of generalized Hurst exponents for time series of respective variables; finally, all cross-correlation relationships are found to be multifractal.