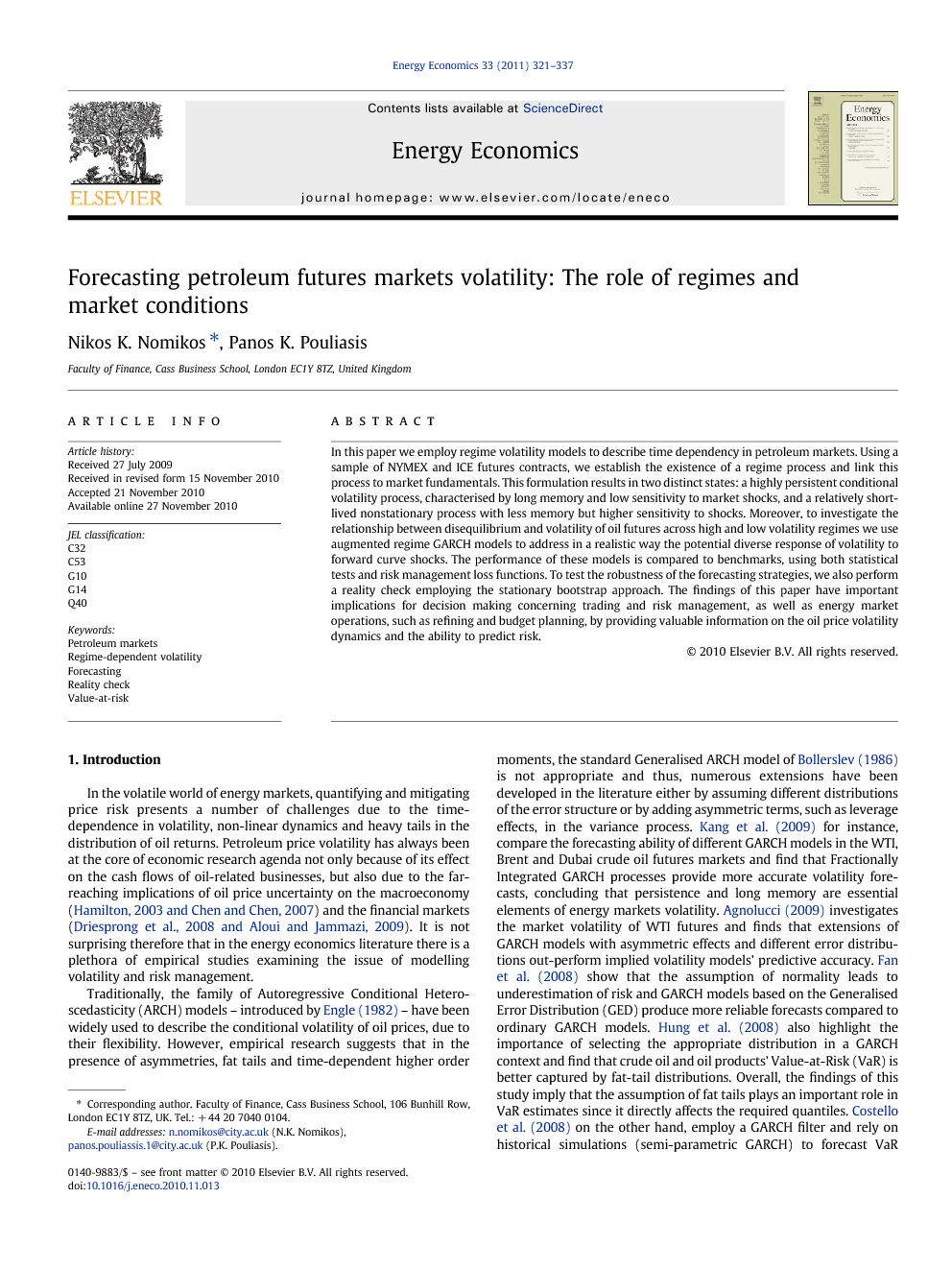 In this paper we employ regime volatility models to describe time dependency in petroleum markets. Using a sample of NYMEX and ICE futures contracts, we establish the existence of a regime process and link this process to market fundamentals. This formulation results in two distinct states: a highly persistent conditional volatility process, characterised by long memory and low sensitivity to market shocks, and a relatively short-lived nonstationary process with less memory but higher sensitivity to shocks. Moreover, to investigate the relationship between disequilibrium and volatility of oil futures across high and low volatility regimes we use augmented regime GARCH models to address in a realistic way the potential diverse response of volatility to forward curve shocks. The performance of these models is compared to benchmarks, using both statistical tests and risk management loss functions. To test the robustness of the forecasting strategies, we also perform a reality check employing the stationary bootstrap approach. The findings of this paper have important implications for decision making concerning trading and risk management, as well as energy market operations, such as refining and budget planning, by providing valuable information on the oil price volatility dynamics and the ability to predict risk.

In this paper we examined the performance of Regime Switching models in forecasting volatility and Value at Risk in the energy markets. Given that the excess kurtosis, skewness and volatility clustering are prominent features of oil price changes, both the Mix-GARCH and MRS-GARCH models are attractive candidates for modelling and forecasting risk. The rationale behind the use of these models stems from the fact that the volatility of these markets may be characterized by regime shifts and by allowing the second moments to be dependent upon the “state of the market”, one may obtain more efficient volatility and VaR estimates and hence, superior forecasting performance compared to the methods which are currently being employed. We apply those models in the NYMEX and ICE petroleum futures markets. Our results indicate that the Mix-GARCH and MRS-GARCH models are better at capturing the persistence in volatility than the GARCH models, and also tend to perform better in an out-of-sample basis. Energy economists and financial analysts should consider these features in the modelling process of oil price volatility, since the Mix-GARCH-X model for all petroleum futures demonstrate better forecasting accuracy than the other models, in terms of balancing the under- and over-prediction of errors. This holds, irrespective of whether the market experiences backwardation or contango. Regarding the VaR application of the models, the augmented GARCH-X model is the most consistent one passing all the tests for all examined markets. Also, conditional EVT poses as a conservative alternative to VaR forecasts, thus, being more appropriate to risk averse investors. Further investigation, by employing risk management loss functions indicates that in both contango and backwardation periods, inclusion of the squared futures spread when predicting volatility is important. Overall, the magnitude of disequilibria is a factor that does have explanatory power in determining potential changes in oil price volatilities and, in addition, by identifying different volatility components for normal and highly volatile periods, market participants may benefit in terms of accurate quantification of risk as this is reflected in VaR forecasts.