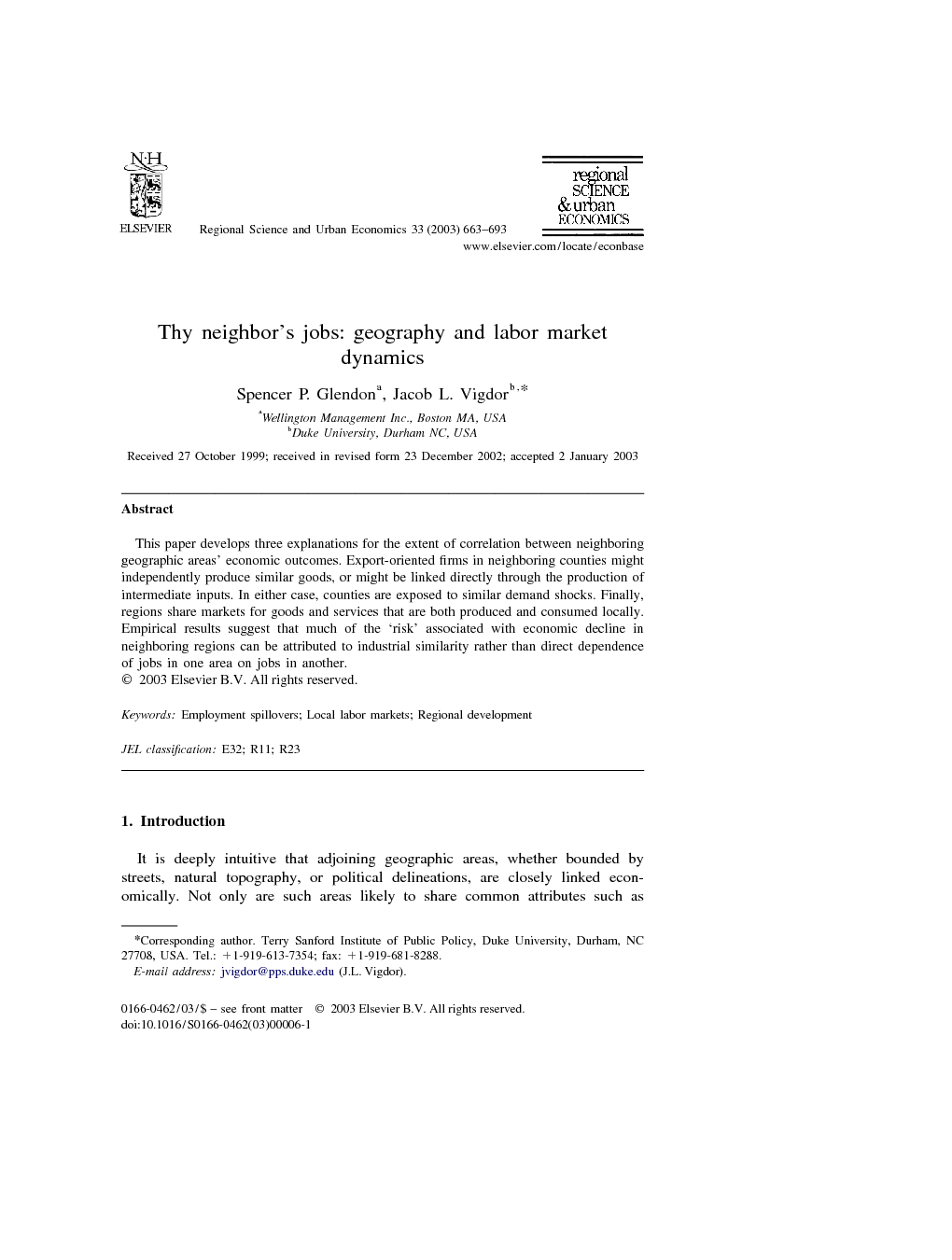 This paper develops three explanations for the extent of correlation between neighboring geographic areas’ economic outcomes. Export-oriented firms in neighboring counties might independently produce similar goods, or might be linked directly through the production of intermediate inputs. In either case, counties are exposed to similar demand shocks. Finally, regions share markets for goods and services that are both produced and consumed locally. Empirical results suggest that much of the ‘risk’ associated with economic decline in neighboring regions can be attributed to industrial similarity rather than direct dependence of jobs in one area on jobs in another.

It is deeply intuitive that adjoining geographic areas, whether bounded by streets, natural topography, or political delineations, are closely linked economically. Not only are such areas likely to share common attributes such as climate and accessibility, they often feature similar industrial composition and production technologies. Additionally, neighboring areas share markets for many locally produced and consumed goods. While a small but growing body of literature has considered these issues (Krugman, 1991, Ghosh and Wolf, 1997 and Hanson, 1998), much economic analysis of geographic regions overlooks this richness of interaction between neighbors. This paper examines the links in economic fluctuations that exist between US counties and tests three hypotheses regarding causal mechanisms underlying the links. In doing so, we model counties as having two basic categories of employment: export-sector employment, which produces goods for a global market, and local-sector employment, which provides goods and services to consumers in the immediate area. Labor demand in the export sector is determined exogenously from the perspective of the locality. Local sector labor demand is determined endogenously. The potential exposure of neighboring counties to similar exogenous export-sector demand shocks motivates two of the three hypotheses. The first might be termed an ‘indirect’ link: counties might produce similar goods for consumption in the global marketplace; therefore when demand for a certain product declines employment reductions will tend to occur in several neighboring counties simultaneously. This hypothesis implies that a shock to one county should be accompanied by a shock of similar relative magnitude in a neighboring county, even if the first county is small relative to the second. We test this hypothesis by examining spatial correlation in relative employment shocks across neighboring counties. Evidence suggests that this causal channel is significant; correlation in relative employment shocks can be detected in regions up to 300 miles in diameter. Indirect export-sector links are most pronounced in industries heavily reliant on fixed-location inputs: agriculture and mining. The second ‘direct’ export-sector link involves firms directly associated with the production process in the originating county. A shock to a producer in one county affects suppliers of intermediate goods in the surrounding area. Unlike the indirect-link hypothesis, this theory implies that the absolute size of employment shocks matters. A 1% employment loss in a relatively small county should have fewer cross-border repercussions than an equivalent percentage point loss in a large county. Our test of this hypothesis focuses on spatial correlation in absolute employment shocks across counties. Evidence supports this link, especially in the manufacturing sector, where upstream–downstream linkages are presumably most important. The final hypothesis concerns the effects of exogenous labor demand shocks on endogenously determined local sector employment. Decreases in export-sector employment in one county may in turn lead to decreased demand for local-sector goods both in the original county and in neighboring areas. As with the direct export-sector hypothesis, this explanation implies that employment in one county depends to some extent on continued employment in another county. The data show surprisingly little support for this hypothesis, suggesting that cross-sector effects are very localized in nature. In addition to examining the development of employment shocks across geographic space, we will also consider development over time. Our motivation for this component of analysis can be seen in Fig. 1. This graph, more fully explained in Section 2 below, shows the predicted impulse response to an initial employment shock measured at two levels of geographic aggregation within the US: county and state. The significant difference in impulse responses implies that the measured after-effects of an initial shock are greater when larger geographic areas are used as the basis for analysis. Simple contemporaneous correlation of shocks across counties within states is not sufficient to explain this pattern. Our evidence suggests that this pattern arises because employment shocks, both within the export sector and across sectors, take time to propagate across space. The after-effects of an initial employment shock are proportionally larger in counties surrounding the origin of the shock.These results have many implications for both practitioners and scholars of regional development. Regions that share risk from employment fluctuations could benefit from region-specific automatic stabilization policies. A rational fiscal federalist system would explicitly consider this risk-sharing in assigning responsibilities to varying levels of government. Our findings do suggest that counties share risk, in the sense that employment patterns in neighboring counties move together. Losses in one county tend to be associated with losses in nearby counties in the long run. Much of the risk that individual counties are exposed to, however, is ‘diversifiable’, since cross-county correlations are rooted to a large extent in similarity of export industries rather than direct upstream–downstream or export-local sector linkages. That is to say, counties with an export employment portfolio relatively uncorrelated with that of their neighbors can expect the impact of downturns in those neighboring areas to be relatively limited. Spillovers from one county’s export sector to its neighbor’s local sector are quite small in magnitude. Section 2 describes our data source and motivates the temporal focus of our study. Section 3 describes our three hypotheses and the relevant empirical tests for each. Details on our methodology and the main empirical findings are presented in Section 4. Section 5 concludes.

Neighboring geographic regions tend to share economic fates. This paper has sought to expose the mechanisms underlying these ties, focusing on three hypotheses. Counties may experience correlated employment fluctuations because they produce similar products for the national market, because firms in neighboring counties may directly cooperate in the production of some goods, or because employment shifts in one county change the demand for locally produced and consumed goods within a multi-county area. In addition to seeking direct evidence to evaluate these hypotheses, we have tested whether any of them can explain the empirical regularity shown in Fig. 1: the after-effects of an employment shock increase in relative magnitude at higher levels of geographic aggregation. Such a pattern would emerge if labor demand shocks propagate across county lines, but take time to do so. Thus we sought evidence of serial correlation across two dimensions: space and time. Our results provide significant evidence of cross-county correlation in shocks to export sector employment, whether measured in relative or absolute terms. Relative export-sector employment fluctuations spread widely, affecting regions up to 600 miles in diameter. Our analysis suggests that the correlation of relative fluctuations is greatest in resource-oriented industries such as mining and agriculture. In manufacturing industries, employment innovations of large absolute magnitude carry the greatest implications for surrounding areas. This distinction suggests, intuitively, that direct links in production involving intermediate inputs are most important in the manufacturing sector. The intercounty, intertemporal transmission of both relative and absolute shocks to the export sector can explain the discrepancy observed in Fig. 1. We find less evidence to support the hypothesis that intersectoral ‘multiplier effects’ spill over across county boundaries. While local-sector firms respond negatively to an adverse export-sector shock both in the short and long run, there is evidence of a temporary positive local-sector response in surrounding areas, and little if any response in the long run. We note that in spite of the relative unimportance of the local sector in propagating employment shocks, the evidence that exists supports a third explanation for the pattern in Fig. 1: across counties, the local-sector response to an export sector shock becomes more negative over time. Previous authors have discussed the risks that any geographic region faces when a neighboring region falls on economic difficulty. Our analysis implies that a large portion of this ‘risk’ is diversifiable−that is, it arises because of industrial similarity rather than direct dependence of employment in one region on continued employment in a neighboring area. A county that produces a composite export good that differs markedly from that of its neighbors will retain a large degree of independence in employment fluctuations. Much remains to be understood in the analysis of geography and labor market dynamics. The role of interlocality migration and wage differentials in mitigating or propogating local demand shocks has not been considered here. It is reasonable to expect that counties of varying sizes have varying impacts on their surroundings, and this paper has only focused on relatively large counties. The role of government redistributive policy in propagating shocks across neighboring areas also merits examination. Although this paper does not fully consider these additional lines of inquiry, it serves to underscore the importance of devoting future resources to them.