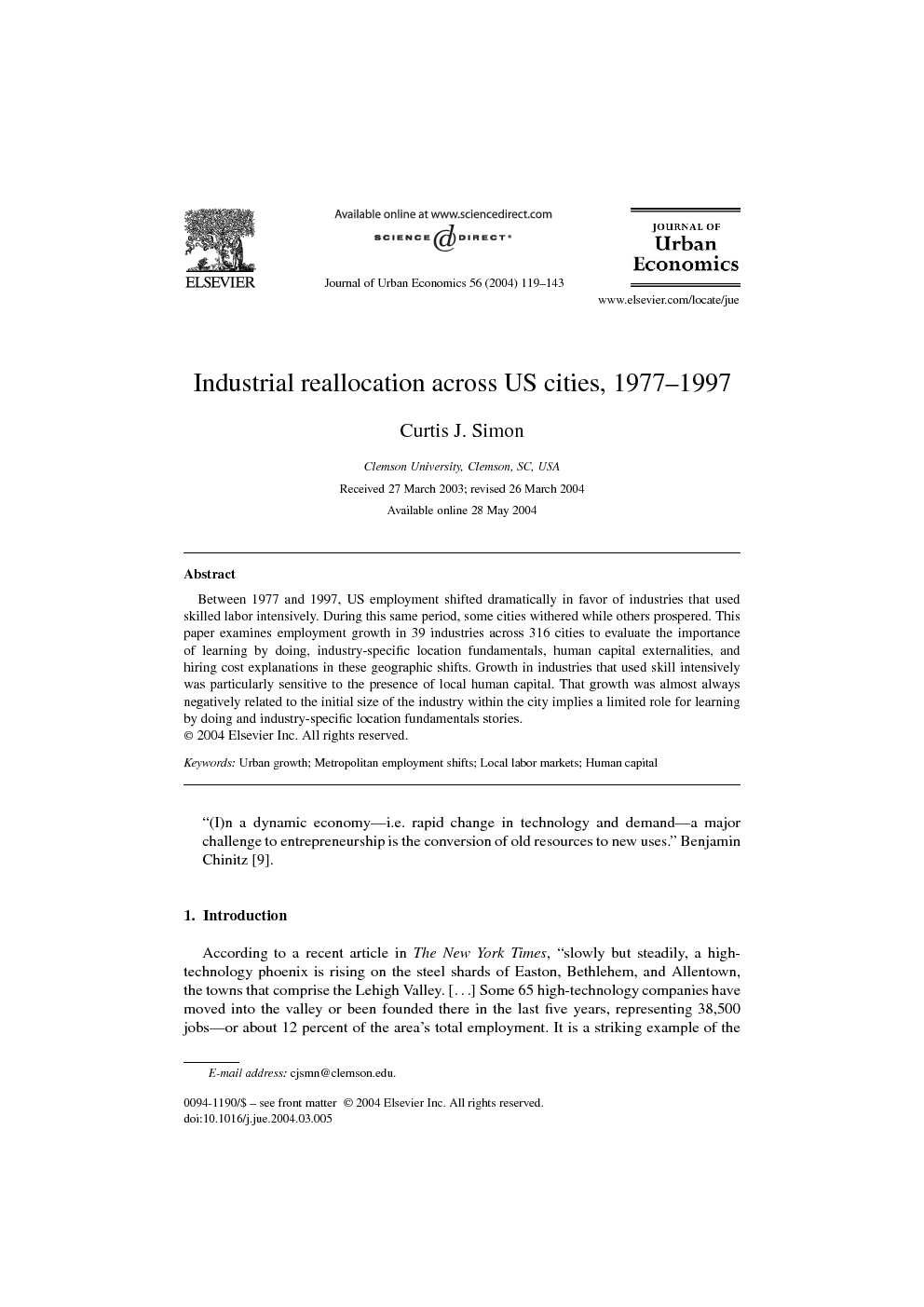 Between 1977 and 1997, US employment shifted dramatically in favor of industries that used skilled labor intensively. During this same period, some cities withered while others prospered. This paper examines employment growth in 39 industries across 316 cities to evaluate the importance of learning by doing, industry-specific location fundamentals, human capital externalities, and hiring cost explanations in these geographic shifts. Growth in industries that used skill intensively was particularly sensitive to the presence of local human capital. That growth was almost always negatively related to the initial size of the industry within the city implies a limited role for learning by doing and industry-specific location fundamentals stories.

According to a recent article in The New York Times, “slowly but steadily, a hightechnology phoenix is rising on the steel shards of Easton, Bethlehem, and Allentown, the towns that comprise the Lehigh Valley. [. . .] Some 65 high-technology companies have moved into the valley or been founded there in the last five years, representing 38,500 jobs—or about 12 percent of the area’s total employment. It is a striking example of the extent to which high technology is transforming some of the most damaged areas of the Rust Belt’s industrial economy” [11]. In the last quarter of the 20th century, the composition of industrial employment transmogrified, shifting away from goods production and towards service production. Between 1977 and 1997, employment in the steel industry fell by nearly 40 percent from 1.2 million to 730,000; employment in transportation equipment declined from just under 1.9 million to 1.67 million; and employment in textiles and apparel from 2.3 to 1.45 million, a decline of 36 percent.1 By contrast, employment in the service industries soared by 250 percent in business services from 2.3 to 8.1 million, and by 216, 201, and 196 percent in health, professional, and social services. It took nearly a quarter of a century for the steel cities of Pennsylvania to recover from the steel shocks of the 1970s and 1980s. To take one particularly hard-hit area, overall employment in the Beaver County, PA metropolitan area declined by 20 percent between 1977 and 1997, driven largely by an 87 percent (!) decline in steel employment. Was it inevitable that overall employment would decline in response to the decline in demand for steel? Blanchard and Katz [5] pointed out that negative shocks need not lead to a decline of the city as a whole. As demand for the city’s output declines, the demand for labor falls, thus reducing wages, in response to which firms in newer, rising industries might enter. However, their evidence indicated that job formation in regions that experience declines in labor demand responds only weakly to movements in wages; most of the adjustment to a decline in labor demand takes the form of out-migration.2 If, as Blanchard and Katz [5] argued, firms respond only weakly to falling wages and rents, what do firms respond to? A number of recent theories of urban growth might help shed light how cities adjust to shifts in the pattern of labor demand. Learning-by-doing stories (Premer and Walz [29], Brezis and Krugman [7], Soubeyran [33]) imply that an initial presence of an industrymay give rise to faster subsequent employment growth in that industry. Stories of growth based on an extension of the theory of location fundamentals (Davis and Weinstein [10]) also suggest such a relationship. By contrast, stories of growth based on human capital externalities (Lucas [20]) suggest that cities with higher average levels of human capital might grow faster provided that human capital—in the language of Henderson et al. [17]—gives rise to a dynamic externality, as would be the case if the rate of technological progress is related to the current stock of human capital. Most theories of urban growth take the overall structure of industry demand in the economy as constant. However, the last quarter of the 20th century was characterized by dramatic industrial change in which resources were being freed from certain sectors and could flow into new ones. In particular, as will be seen, industries that used human capital intensively were on the rise and industries that used unskilled labor intensively were on the decline. A simple potential explanation for the altered patterns of urban growth is that firms in rising industries located in cities that offered relatively abundant supplies of skilled labor. Such supplies would have varied, depending in part upon how much such labor was freed by the shifts in demand, as well as on variations in the quality of schooling systems and on random location-specific factors unrelated to labor demand (e.g., amenities) that might affect location decisions. This paper examines empirically patterns of sectoral and industry employment growth across 316 US cities between 1977 and 1997 to distinguish between these explanations. This paper builds on the empirical frameworks of Henderson et al. [17], Henderson [16], and Glaeser et al. [14], examining the determinants of employment growth during the turbulent 1977–1997 period at the sectoral and industry levels. The remainder of the paper is organized as follows. Section 2 briefly reviews some theories of urban growth and development. Section 3 provides an overview of industrial change and city employment growth. Section 4 estimates employment growth regressions for three inclusive sectors to establish some broad patterns in the data. Section 5 extends the analysis to the industry level. Section 6 concludes the paper with a brief summary and directions for future research.

Between 1977 and 1997, employment in goods-producing industries stagnated, while employment in services, particularly those that use skill intensively, rose. This compositional shift was accompanied by equally dramatic shifts in the distribution of employment across cities. Using data on employment growth in 39 industries across 316 cities over this period, this paper attempted to distinguish between competing explanations for the relative success of some cities and relative failure of others. A number of useful findings emerged. First, a larger initial presence of an industry in a city was associated with slower subsequent growth, particularly in the newer, skillintensive industries that dominated nation-wide employment growth. Second, although some researchers downplay the role of relative wages, there is some evidence here that employment grew more slowly in cities with higher wage levels, especially in newer, more skill-intensive industries, which finding suggests that these industries may have been more footloose than their older counterparts. Third, cities with relatively larger manufacturing shares experienced slower growth in newer, rising industries, a finding that is consistent with learning-by-doing stories in which cities that specialized in older technologies have greater difficulty adjusting to new ones. The local abundance of college graduates had a positive effect on employment growth, especially in skill intensive and newer industries, which is consistent with the notion that skill-intensive industries located where human capital is relatively abundant in order to reduce search and hiring costs. However, it is also consistent with the existence of human capital spillovers, as well as with the notion that cities with higher fractions of college graduates provided a wider range of intermediate goods and services that were particularly useful to firms in newer, more skill-intensive industries. More intensive patent activity was also associated with faster employment growth, particularly in newer industries, which is consistent with the existence of localized dynamic spillovers. Although there was some evidence that more inventive cities were particularly attractive to firms in newer industries, there was no evidence that more skill-intensive industries were more attracted to inventive cities. The findings suggest a number of possible avenues for future research. Additional work is necessary to understand more fully the adjustment of cities. Cities with particularly large manufacturing sectors experienced particularly large negative shocks. The amount of unskilled and semi-skilled labor freed up by such cities should have resulted in relatively faster growth in trade and service industries that use unskilled labor intensively. However, the empirical work in this paper found such a result only in personal services, and not in trade industries. Because faster growth in the so-called export sector presumably generates faster growth in demand for trade and services, it is important to differentiate between the effects of demand and supply when studying the adjustment of cities. Individuals who were displaced from their jobs during the 1970s and 1980s had to decide whether to remain in their current city or to move. Using data on displaced workers over the period 1979–1994, Kletzer [19] found that workers who were displaced out of the manufacturing sector were most likely to find employment in trade and services, and experienced substantial wage losses. Her work might be extended to consider the question of geographic as well as industrial mobility. Future work could also examine the role of geographic mobility in determining whether a worker displaced from manufacturing remained within manufacturing, or more generally, in alleviating wage reductions.