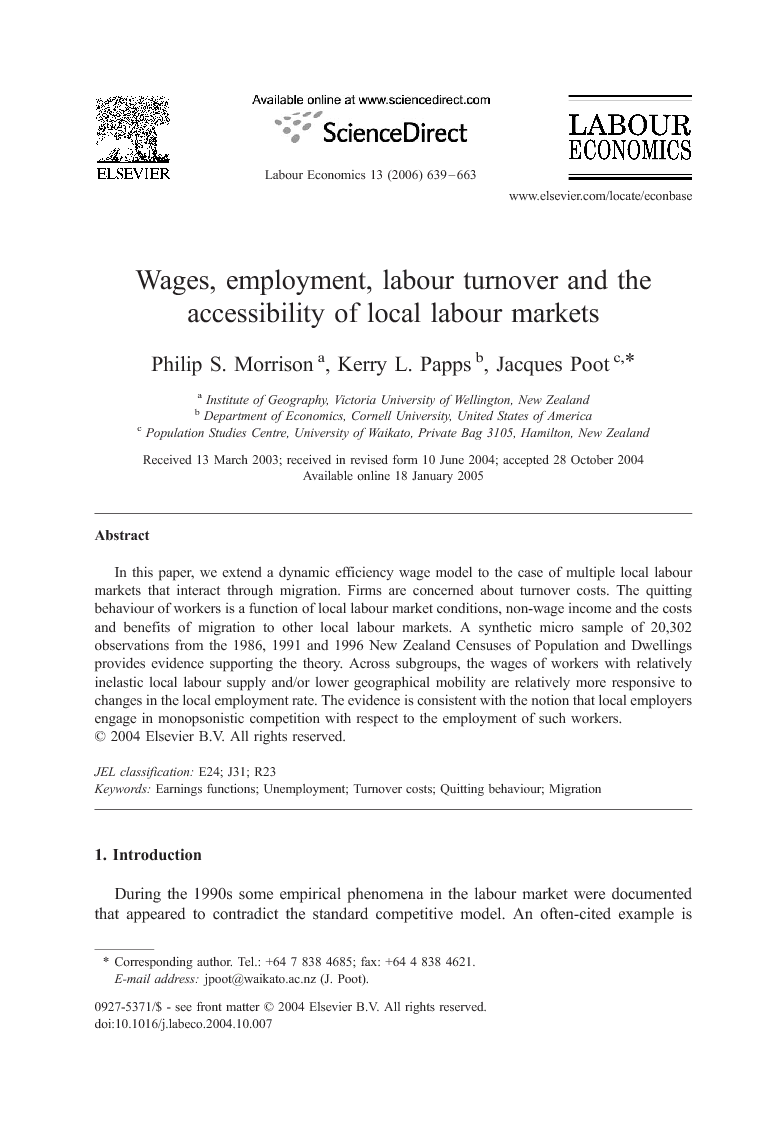 In this paper, we extend a dynamic efficiency wage model to the case of multiple local labour markets that interact through migration. Firms are concerned about turnover costs. The quitting behaviour of workers is a function of local labour market conditions, non-wage income and the costs and benefits of migration to other local labour markets. A synthetic micro sample of 20,302 observations from the 1986, 1991 and 1996 New Zealand Censuses of Population and Dwellings provides evidence supporting the theory. Across subgroups, the wages of workers with relatively inelastic local labour supply and/or lower geographical mobility are relatively more responsive to changes in the local employment rate. The evidence is consistent with the notion that local employers engage in monopsonistic competition with respect to the employment of such workers.

In this paper we examined the role that local labour market conditions play in wage determination. We extended a labour turnover cost model proposed by Campbell and Orszag (1998). While their model is essentially non-spatial, in this paper we explicitly incorporated the interaction between local labour markets. The theory was put to the test by means of a ‘synthetic’ micro-sample of 20,302 observations in 30 New Zealand local labour markets, derived from 1986, 1991 and 1996 New Zealand census data. The employment rate was found to enter the wage equation with a positive coefficient, consistent with the notion of a short-run wage curve. In addition, more remote labour market areas coincide with lower earnings, ceteris paribus. Moreover, local quits respond to available wages in other local labour markets. A key conclusion of the study is that differences in the extent to which local labour market conditions affect the wages of subgroups of workers are important. Some evidence of a wage curve was found for men, but not for women, even after controlling for endogeneity of the employment rate. One explanation for this, consistent with the turnover cost model, is that the labour force participation of female workers is more elastic than that of males. A similar argument may also explain why the employment elasticity of pay is relatively low for workers aged under 26. Furthermore, the earnings of non-Europeans, part-time workers and those with less education are more vulnerable to the state of the local business cycle. On the whole, our model and empirical evidence are consistent with the notion that local employers engage in monopsonistic competition with respect to the employment of less mobile workers. In general, the elasticities found for hourly earnings did not differ greatly from those found for annual income, suggesting that hours worked varied little with local labour market conditions. Blanchflower and Oswald (1994) described their empirical findings on wages and unemployment as featuring ‘two of the variables that most interest policymakers’ (p. 1). The results of this study suggest that the wages of certain groups of workers are more responsive to changes in local employment prospects than those of others. Any attempt to reduce this vulnerability will then require increasing the geographical mobility of these workers. Future research needs to address the cause of the observed variation in the slope of the wage curve by estimating the quit-rate function directly using labour turnover data.