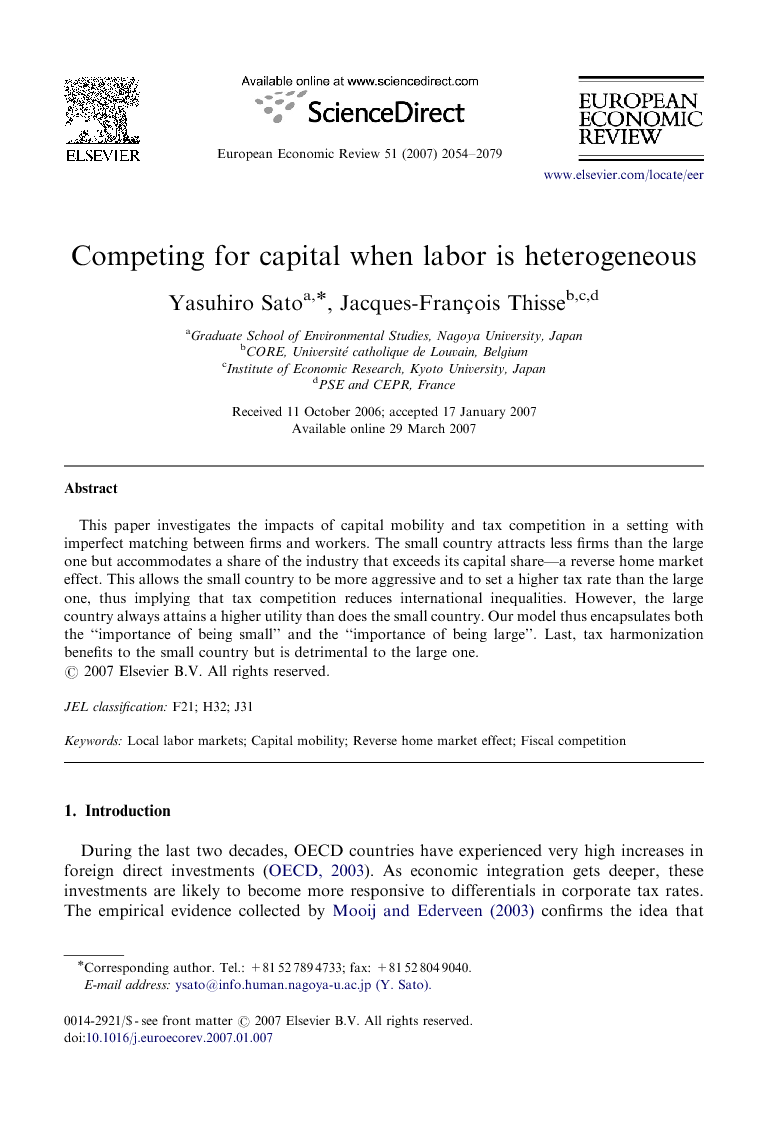 This paper investigates the impacts of capital mobility and tax competition in a setting with imperfect matching between firms and workers. The small country attracts less firms than the large one but accommodates a share of the industry that exceeds its capital share—a reverse home market effect. This allows the small country to be more aggressive and to set a higher tax rate than the large one, thus implying that tax competition reduces international inequalities. However, the large country always attains a higher utility than does the small country. Our model thus encapsulates both the “importance of being small” and the “importance of being large”. Last, tax harmonization benefits to the small country but is detrimental to the large one.

We have obtained new results in tax competition in an otherwise standard model, which goes back at least to Salop (1979). Whereas the large country has more firms per capita than does the small country both under tax competition and tax cooperation in Ottaviano and van Ypersele (2005), we have seen that the large country always exports capital toward the small one. This is because we have a RHME, whereas the home market effect holds in Ottaviano and van Ypersele. This shows that the way firms choose their location is crucial in assessing the merits of tax competition. Stated differently, uncovering the various mechanisms that drive the mobility of firms across countries is needed to understand the possible implications of fiscal competition. An interesting implication of our framework is to shed light on the fact that fiscal competition might well trigger unemployment in a country. To see it, consider an economic environment in which some workers might not take a job, the setting being otherwise similar to the one described above. Specifically, we assume that workers get the same level of unemployment benefit b>0b>0 when unemployed. This implies that a worker supplies labor provided that her wage net of training costs is greater than or equal to b. Thisse and Zenou (2000) then show that the labor-market equilibrium involves unemployment in country i when 1<b+β/ni1<b+β/ni holds, namely when the number of firms located in this country is sufficiently small. In this case, the most distant workers on the skill circle refrain from working, thus implying that each firm acts as a monopsony in the labor market. Thus, capital mobility could foster unemployment in the large country that now has a smaller number of firms, thus qualifying Proposition 3. On the other hand, as fiscal competition leads to a reduction in the number of firms installed in the small country when compared to the no-tax case, it is now the small country that could experience unemployment at the taxation outcome, thus qualifying Proposition 7. At least three possible extensions are worth mentioning. First, countries could use the tax proceeds to subsidize workers’ training. In such a context, training costs would become lower and wages higher. However, lower training costs would make the corresponding country less attractive by reducing firms’ market power on the labor market. The following question thus suggests itself: To which extent does one country subsidy its labor force more than the other, and get a better trained labor force, according to its size? Second, introducing capital accumulation with the aim of studying the relationship between economic growth and skill mismatch appears to be a fairly natural topic to investigate. Last, some empirical evidence suggests that several countries tax discriminate between local and foreign firms instead of applying the same tax rate as in this paper (Huizinga and Nicodème, 2006). It would be interesting to revisit our model when national governments may use such additional instruments. These topics are left for future investigation.