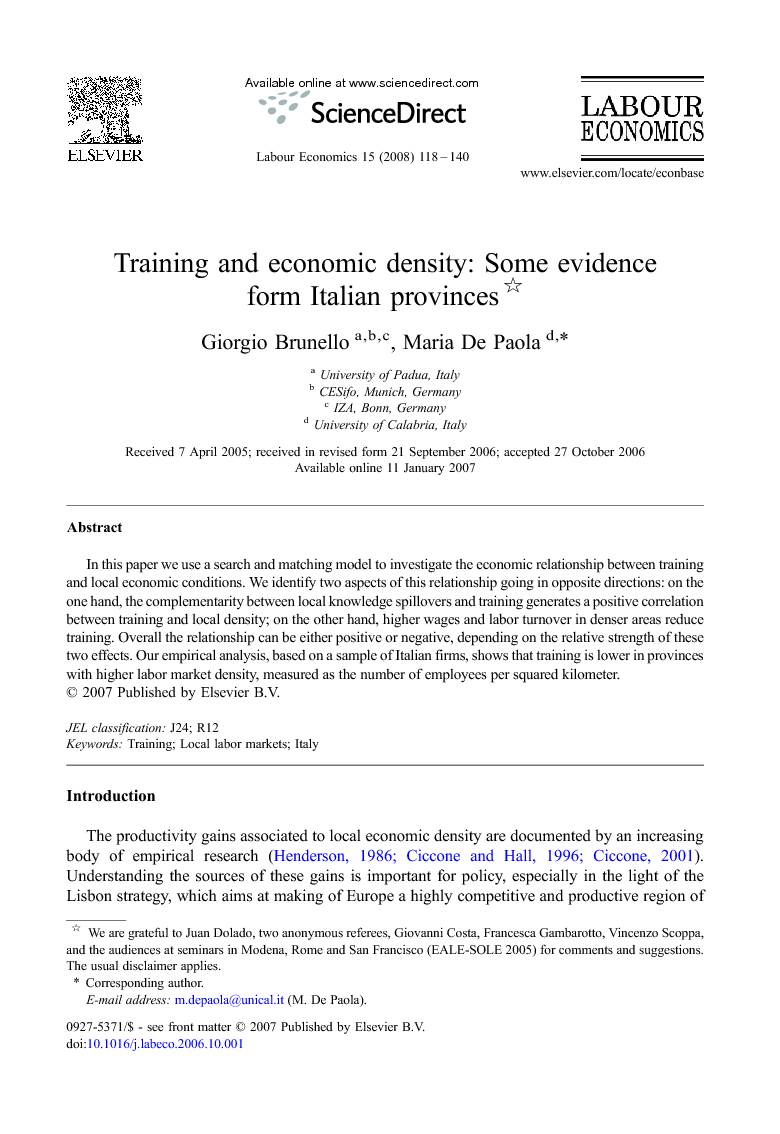 In this paper we use a search and matching model to investigate the economic relationship between training and local economic conditions. We identify two aspects of this relationship going in opposite directions: on the one hand, the complementarity between local knowledge spillovers and training generates a positive correlation between training and local density; on the other hand, higher wages and labor turnover in denser areas reduce training. Overall the relationship can be either positive or negative, depending on the relative strength of these two effects. Our empirical analysis, based on a sample of Italian firms, shows that training is lower in provinces with higher labor market density, measured as the number of employees per squared kilometer.

Economic density, according to a growing body of research, encourages shared learning among individuals and firms and generates positive knowledge spillovers. Since the ability to translate information in real economic advantages is strictly related to the skills of the labor force, firms located in dense labor markets are encouraged to invest in training. However, density not only provides benefits, it also generates economic costs — identifiable with higher wages and a higher turnover risk. In the model proposed in this paper, these effects are analyzed in a matching and search framework. While from the theoretical point of view the effect of economic density on training investment can be either negative or positive, our empirical analysis suggests the prevalence of a negative effect. Using data on a sample of Italian manufacturing firms, we show that training is higher in provinces with lower employment density. This result confirms the evidence presented by Brunello and Gambarotto (in press), for the UK, and more recently by Muehleman and Walter (2006), for Switzerland. Our findings refer to off-the-job training provided by external organizations specialized in training provision. An open question is whether they can be extended to all training. While our data do not allow a direct answer, we speculate that the exclusion of on-the-job training should not substantially modify our results for two reasons: first, our sample includes mainly small firms with less than 50 employees, which find it too costly to provide their own training facilities; second, there is no clear correlation between the type of knowledge transmission (on-the-job versus off-the-job, formal versus informal) and the transferability of knowledge. While firms might substitute general with specific training, the empirical evidence shows that to a large extent on-the-job training is general, so that the threat of turnover applies as well. Our results suggest that the productivity gains associated to local economic density are not attained because firms in denser areas train more their employees. If anything, they train less, we believe because congestion effects – such as higher wages, poaching and turnover– are at work which dampen the positive effects of clustering on training. For the viewpoint of policy, the key question is whether firms in dense economic areas are training too little. It is hard to say. The economic literature on the under-provision of training is rather inconclusive, mainly because of relevant measurement issues: to establish a case for under-provision requires information on the private and social costs and returns to training, a formidable empirical task with the data at hand.