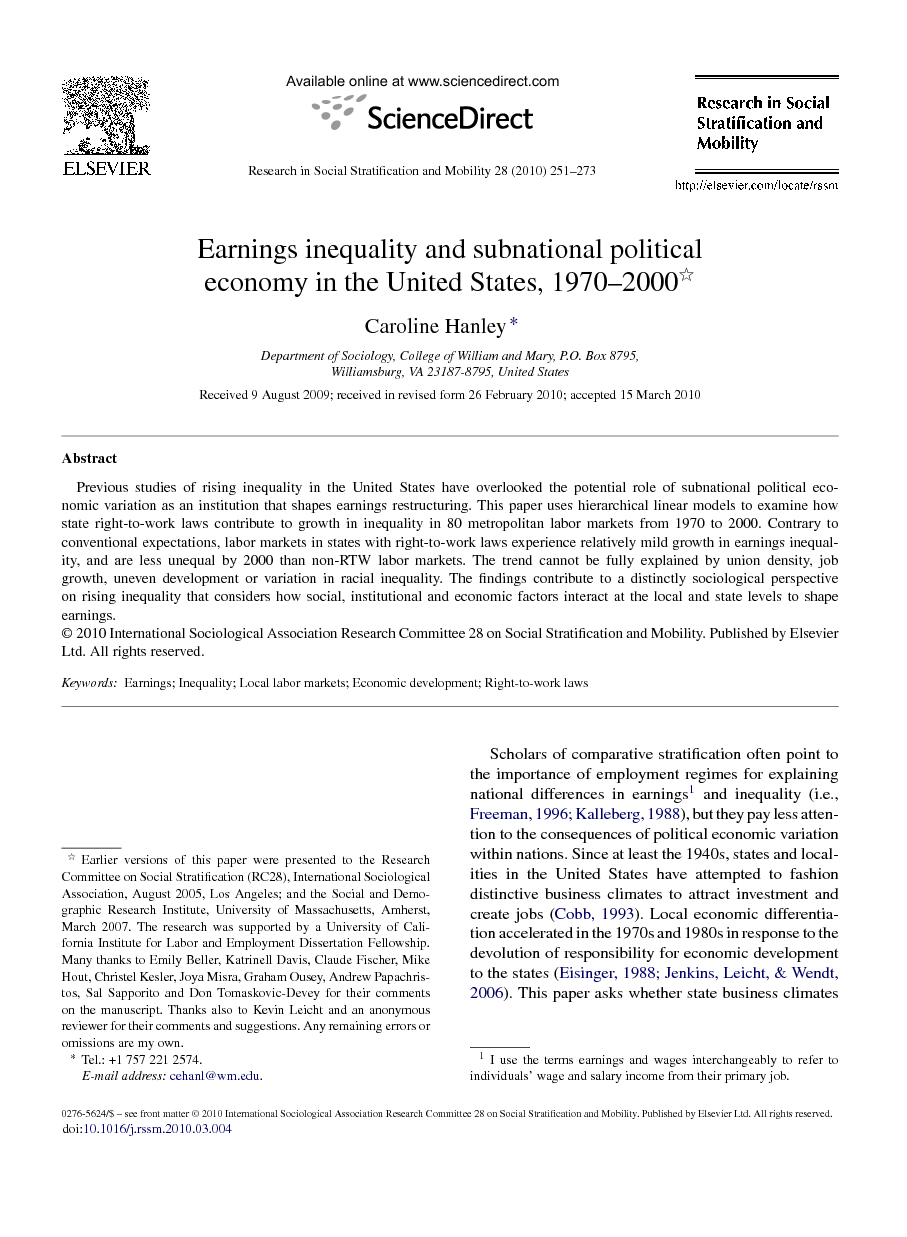 Previous studies of rising inequality in the United States have overlooked the potential role of subnational political economic variation as an institution that shapes earnings restructuring. This paper uses hierarchical linear models to examine how state right-to-work laws contribute to growth in inequality in 80 metropolitan labor markets from 1970 to 2000. Contrary to conventional expectations, labor markets in states with right-to-work laws experience relatively mild growth in earnings inequality, and are less unequal by 2000 than non-RTW labor markets. The trend cannot be fully explained by union density, job growth, uneven development or variation in racial inequality. The findings contribute to a distinctly sociological perspective on rising inequality that considers how social, institutional and economic factors interact at the local and state levels to shape earnings.

Scholars of comparative stratification often point to the importance of employment regimes for explaining national differences in earnings1 and inequality (i.e., Freeman, 1996 and Kalleberg, 1988), but they pay less attention to the consequences of political economic variation within nations. Since at least the 1940s, states and localities in the United States have attempted to fashion distinctive business climates to attract investment and create jobs (Cobb, 1993). Local economic differentiation accelerated in the 1970s and 1980s in response to the devolution of responsibility for economic development to the states (Eisinger, 1988 and Jenkins et al., 2006). This paper asks whether state business climates shaped the path of inequality growth in metropolitan labor markets from 1970 to 2000. I focus on one of the oldest and most enduring elements of state business climates, right-to-work (RTW) laws. Right-to-work laws limit union security, or the requirement that workers covered by collective bargaining agreements pay union dues (Baird, 1998). Right-to-work laws are an important feature of American political economy because they shape labor relations, promote a competitive model of economic development, and are meaningful in the business community as signals of a neoliberal orientation to growth (Cobb, 1993). Using multi-level growth curve analysis I find that metropolitan labor markets in RTW states are more unequal than non-RTW labor markets in 1970, but RTW labor markets experience milder inequality growth over the 30-year period of earnings restructuring. I use the existing literature on RTW laws to derive hypotheses of why metropolitan labor markets’ levels of inequality in 1970, and growth in inequality from 1970 to 2000, vary across RTW contexts. The literature suggests that RTW laws may shape earnings inequality directly via effects on union density and employment growth, and indirectly due to the laws’ correlation with levels of economic development and racial inequality. These conventional expectations explain the greater levels of inequality observed in RTW labor markets in 1970, but they are insufficient for understanding variation in inequality growth across RTW and non-RTW contexts from 1970 to 2000. The robust negative relationship between RTW laws and inequality growth is puzzling from the perspective of comparative research that associates higher levels of inequality and sharper inequality growth with weak labor market institutions (e.g., DiPrete et al., 2006, Kenworthy and Pontusson, 2005 and Pontusson et al., 2002). I theorize that the relationship between labor market institutions such as unions and inequality is curvilinear, with the greatest levels of inequality found in systems with labor market institutions that are stronger than those in adjacent areas, but too weak to prevent capital flight and institutional weakening (see Calmfors & Driffill, 1988). From this perspective, capital mobility and related elements of competitive development decrease the bargaining power of unions net of union density (Moore, 1998) and increase employment insecurity (Bourdieu, 2003 and Bronfenbrenner, 2000), therefore altering the dynamics of earnings determination within firms and producing sharp inequality growth in non-RTW labor markets. By considering the relationship between local earnings restructuring and subnational political economy, and conceptualizing earnings determination as a multi-level phenomenon, this paper offers a fresh perspective on one of the most socially significant but sociologically understudied recent trends in the United States, the growth of economic inequality (Myles & Myers, 2007).