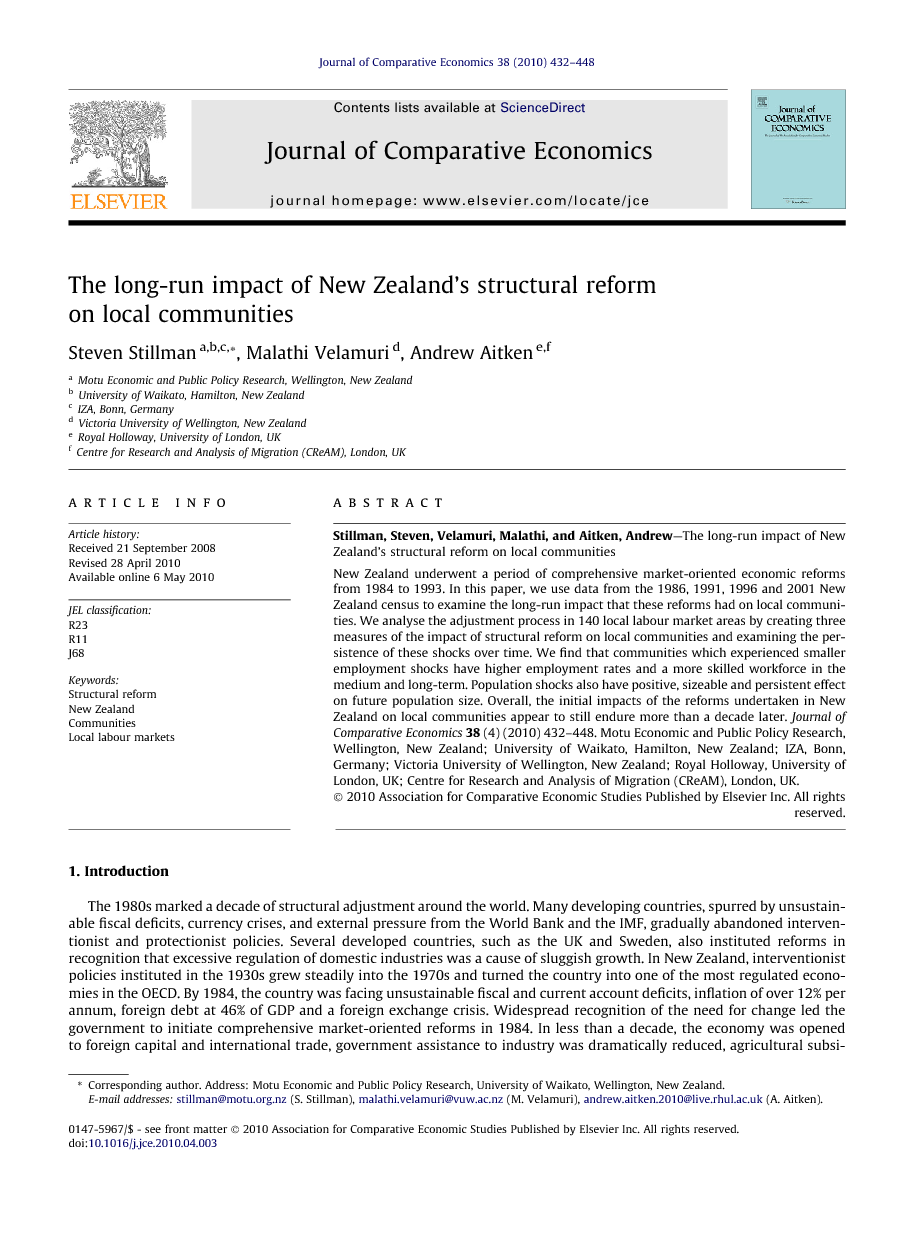 New Zealand underwent a period of comprehensive market-oriented economic reforms from 1984 to 1993. In this paper, we use data from the 1986, 1991, 1996 and 2001 New Zealand census to examine the long-run impact that these reforms had on local communities. We analyse the adjustment process in 140 local labour market areas by creating three measures of the impact of structural reform on local communities and examining the persistence of these shocks over time. We find that communities which experienced smaller employment shocks have higher employment rates and a more skilled workforce in the medium and long-term. Population shocks also have positive, sizeable and persistent effect on future population size. Overall, the initial impacts of the reforms undertaken in New Zealand on local communities appear to still endure more than a decade later.

This paper uses data from the 1986, 1991, 1996 and 2001 census to examine the medium and long-run impact that structural reforms introduced in the 1980s in New Zealand had on local communities. We analyse the adjustment process in 140 local labour market areas, across which there was large variation in the initial impact of the reforms. We do this by creating three measures of the impact of structural reform on local communities – an employment-based measure, a population measure and a housing price measure – and by examining the persistence of these shocks over time. We then undertake a regression analysis which estimates the impact of initial economic conditions and demographic characteristics in 1986 on outcomes in each community in 1991, 1996 and 2001 and examines the impact of the employment, population and housing price shocks on outcomes in 1996 and 2001, controlling for initial economic and demographic characteristics in 1986. Our results indicate that initial characteristics are very important in explaining future outcomes. Communities that had higher employment rates and average income in 1986 have relatively better outcomes in the short, medium and long-term. We also find consistent evidence that the changes in community fortunes that occurred between 1986 and 1991 are associated with long-run effects on these communities, even after controlling for the fact that there are wide-ranging differences between communities in 1986. For example, communities that experienced smaller employment shocks have higher employment rates in 1996 and 2001, while those that experienced smaller population shocks have larger future populations, and those which experienced smaller house price shocks have higher future house prices. We also find evidence that employment shocks had long-run impacts on skill-levels, with communities that had the largest employment losses between 1986 and 1991, having the least skilled local populations in 2001. These results are, in general, consistent with those found in Choy et al., 2002 and Grimes et al., 2007, which both use quarterly data from the HLFS to estimate empirical vector autoregression (VAR) models to identify the channels through which regional labour markets adjust in response to local employment shocks in New Zealand. In particular, both papers find that employment shocks translate to long-run changes in employment levels. Grimes et al. (2007) also find no impact of employment shocks on house prices. However, in contrast to our results, these studies also find that the impact of employment shocks on long-run employment is partially mitigated by population change. There are a number of likely reasons why our results differ from those in these two papers. Choy et al. (2002) study adjustment to employment shocks in 12 regions in New Zealand, while the unit of analysis in Grimes et al. (2007) is 73 territorial authorities (TAs), grouped into 15 areas. In neither case are these areas economically meaningful. On the other hand, we examine 140 labour market areas which are smaller geographical entities explicitly created to encompass self-contained areas of economic activity. Furthermore, in Choy, the working-age population is defined to be 15–64 year-olds and, in Grimes, 20–64 year-olds, while our sample is restricted to 25–54 year-olds and hence excludes both students and near retirees who are less likely to move for economic reasons. Notably, the HLFS is not particularly well-suited for measuring local population levels since the sample weights are constructed to produce reliable national-level, but not regional population estimates. This is likely to create artificial variation in population at the regional level, potentially leading to bias in the estimates of the short-run impacts of employment shocks on population change (Choy et al., 2002). Methodologically, the VAR framework relies on model restrictions to identify the relationship between employment shocks and population changes.14 In contrast, the methodology used in this paper is relatively unrestricted. Hence, we believe our results provide strong evidence that migration did not play a large role in helping local communities in New Zealand adjust to changes in local employment rates related to the structural reform process. Bearing in mind that most of the international literature uses a VAR framework, our results suggest that the process of adjustment to structural reform in New Zealand had more in common with how regions in European countries with relatively inflexible labour markets respond to economic shocks than with the response of regions in countries like the US with more flexible labour markets (Spilimbergo and Kwon, 2005). This is consistent with international assessments of labour market flexibility which place New Zealand among the continental European countries with relatively inflexible labour markets (Lawson and Bierhanzl, 2004).