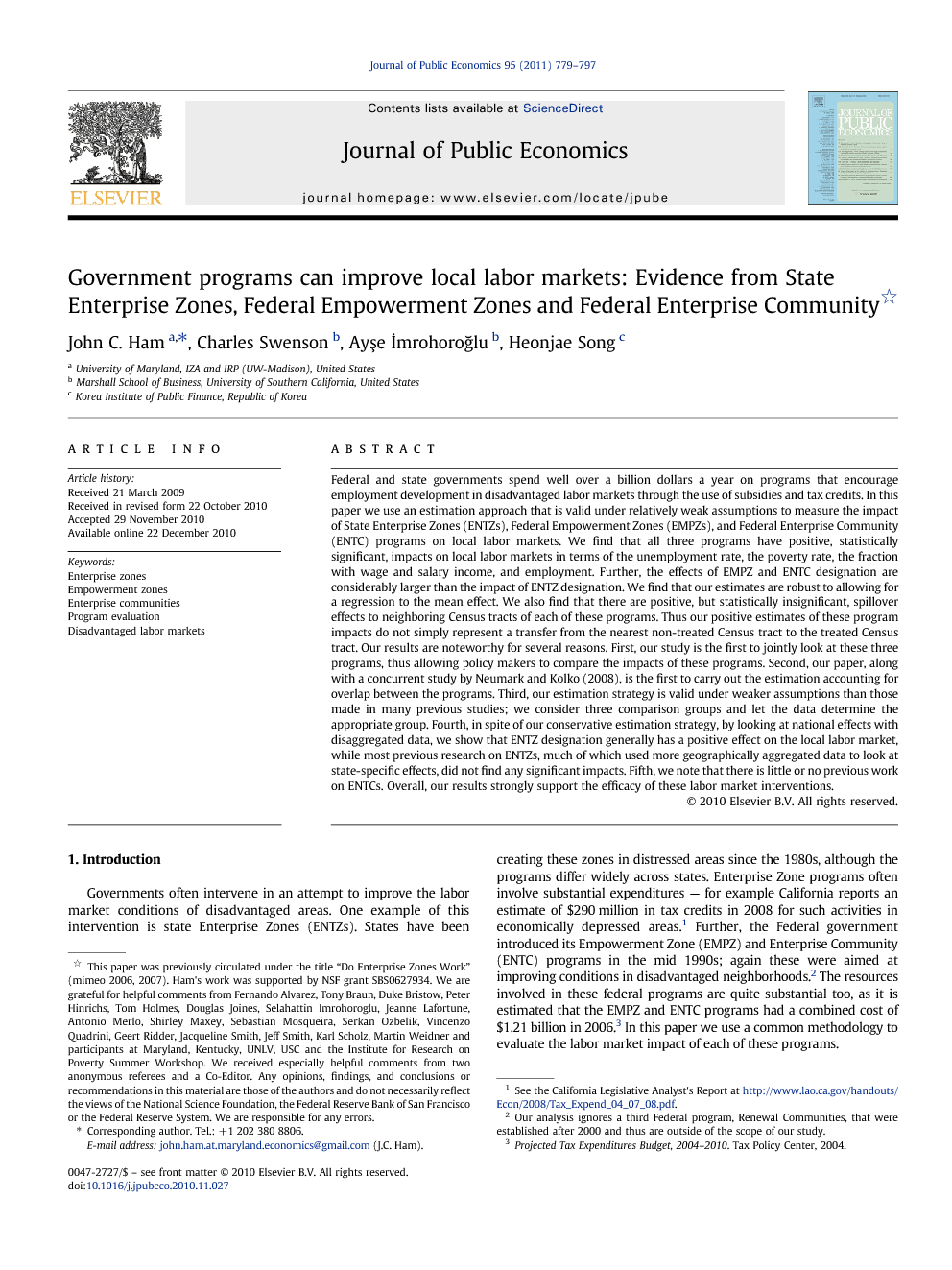 Federal and state governments spend well over a billion dollars a year on programs that encourage employment development in disadvantaged labor markets through the use of subsidies and tax credits. In this paper we use an estimation approach that is valid under relatively weak assumptions to measure the impact of State Enterprise Zones (ENTZs), Federal Empowerment Zones (EMPZs), and Federal Enterprise Community (ENTC) programs on local labor markets. We find that all three programs have positive, statistically significant, impacts on local labor markets in terms of the unemployment rate, the poverty rate, the fraction with wage and salary income, and employment. Further, the effects of EMPZ and ENTC designation are considerably larger than the impact of ENTZ designation. We find that our estimates are robust to allowing for a regression to the mean effect. We also find that there are positive, but statistically insignificant, spillover effects to neighboring Census tracts of each of these programs. Thus our positive estimates of these program impacts do not simply represent a transfer from the nearest non-treated Census tract to the treated Census tract. Our results are noteworthy for several reasons. First, our study is the first to jointly look at these three programs, thus allowing policy makers to compare the impacts of these programs. Second, our paper, along with a concurrent study by Neumark and Kolko (2008), is the first to carry out the estimation accounting for overlap between the programs. Third, our estimation strategy is valid under weaker assumptions than those made in many previous studies; we consider three comparison groups and let the data determine the appropriate group. Fourth, in spite of our conservative estimation strategy, by looking at national effects with disaggregated data, we show that ENTZ designation generally has a positive effect on the local labor market, while most previous research on ENTZs, much of which used more geographically aggregated data to look at state-specific effects, did not find any significant impacts. Fifth, we note that there is little or no previous work on ENTCs. Overall, our results strongly support the efficacy of these labor market interventions.

In this paper we use a conservative double difference estimation approach and disaggregated labor market data to measure the impact of State Enterprise Zones, Federal Empowerment Zones, and Federal Enterprise Community programs. We find that all of these programs significantly improve local labor markets, although the effects of EMPZ and ENTC designation are considerably larger in absolute value, perhaps because they are implemented in much more disadvantaged labor markets. We consider the possibility that treatment is assigned on the basis of a negative shock in 1990 which will cause an overstatement of beneficial treatment effects by using an IV approach, but our qualitative results are not affected by doing so. Finally, we find very little evidence of spillovers to the nearest non-treatment tract, and not surprisingly, dropping this nearest tract does not affect our results. These results are noteworthy for several reasons. Our study is the first to jointly look at these three programs, allowing policy makers to compare the relative impacts of these programs estimated by a common research strategy. We show that about 5% of ENTZ tracts are also EMPZs or ENTCs, and that about 10% of EMPZs and 20% of ENTCs are also ENTZs. Our paper is the first to carry out our estimation without the overlapping tracts, and we find that the results do not change in meaningful way if this overlap is ignored. Second, in spite of our conservative estimation strategy, by looking at national effects with disaggregated data we demonstrate that, on average, ENTZ designation has a significantly beneficial effect on local labor markets, while most previous research did not find any significant impact. In addition, we find strong and significant beneficial effects of EMPZ and ENTC designation. The EMPZ program has received less attention in the literature, and the studies that do consider this program produce conflicting results, perhaps because of an identification problem that arises with propensity score matching in this case. Using a common methodology, we find that all of these programs significantly improve local labor markets.