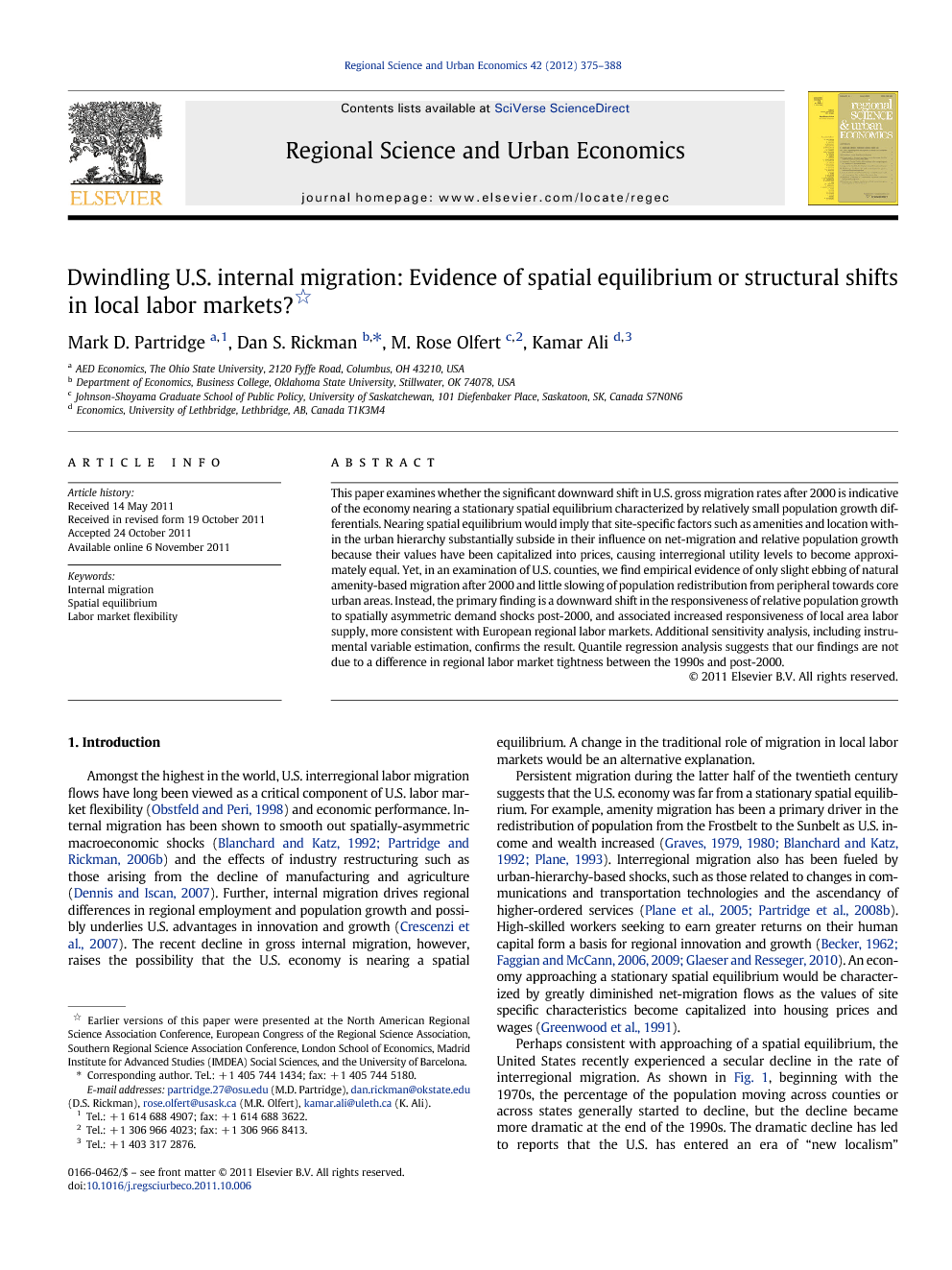 This paper examines whether the significant downward shift in U.S. gross migration rates after 2000 is indicative of the economy nearing a stationary spatial equilibrium characterized by relatively small population growth differentials. Nearing spatial equilibrium would imply that site-specific factors such as amenities and location within the urban hierarchy substantially subside in their influence on net-migration and relative population growth because their values have been capitalized into prices, causing interregional utility levels to become approximately equal. Yet, in an examination of U.S. counties, we find empirical evidence of only slight ebbing of natural amenity-based migration after 2000 and little slowing of population redistribution from peripheral towards core urban areas. Instead, the primary finding is a downward shift in the responsiveness of relative population growth to spatially asymmetric demand shocks post-2000, and associated increased responsiveness of local area labor supply, more consistent with European regional labor markets. Additional sensitivity analysis, including instrumental variable estimation, confirms the result. Quantile regression analysis suggests that our findings are not due to a difference in regional labor market tightness between the 1990s and post-2000.

Using county level data, this paper examined whether the post-2000 downward shift in U.S. gross migration rates signaled that the economy was approaching a stationary spatial equilibrium where established site-specific forces driving population shifts were diminishing in influence. These include the long-standing movements of population to areas possessing a pleasant climate and other desired natural amenity attributes, as well as the traditional movements of population from peripheral to urban core areas. Our findings suggest that these population movements continued post-2000, with amenity-based population shifts becoming only somewhat muted. Thus, current and future differentials in area attractiveness related to natural amenities and urbanization have not been fully capitalized into factor prices to produce a spatial equilibrium in which population growth would be more evenly spread across space. Forces underlying these processes appear to continue producing divergence in well-being across the United States, consistent with the findings of Oswald and Wu (forthcoming). Nevertheless, we do find a downward shift in population (net migration) responsiveness to spatially asymmetric demand shocks. Pre-2000, net migration was the primary labor supply response to regionally-variant demand shocks. Post-2000, however, demand shocks almost exclusively have been satisfied by changes in local labor supply. This raises the possibility that the tepid job growth associated with strong productivity growth post-2000 provided ample sources of local labor supply, precluding the need for in-migrants to fill new jobs. Yet, using quantile regression analysis, we generally did not find that the marginal population response to a unit labor demand shock in areas with strong growth exceeded the corresponding response in areas experiencing weak growth. This contrasts with an expectation that population would be more responsive in faster growing areas with tighter labor markets than in those with more excess labor supply if the difference in national employment growth across the two period was responsible for the shift in migration responsiveness. The lack of migration response to differential economic shocks suggests a structural shift, in which U.S. regional labor markets took on more of a European flavor, potentially affecting macroeconomic performance and adjustments to shocks. For example, only post-2000, did we find greater variability in demand shocks to be associated with lower net migration, suggesting increased risk aversion as reducing migration. If so, government policies would need to be oriented more towards creating jobs where the people are, rather than assuming that people will move to the jobs (Partridge and Rickman, 2006a). Yet, amenity migration, albeit somewhat muted, and core–periphery migration, indicated some continued willingness to move. Thus, other potential explanations for the changing role of migration in satisfying spatially asymmetric demand shocks should be explored. One possibility is a rise in mobility across industries, as suggested by the findings of Kambourov and Manovskii (2008) for 1968–1997. Among the possible explanations they offered were changes in government regulation, unionization and increased globalization. Greater use of contingent workers also could facilitate such industry mobility. In our case, if workers could more readily shift across industries within their occupation, workers would be more affected by occupation (skill) shocks and less affected by shocks to industry. Indeed, we find some preliminary evidence that geographical mobility is increasingly tied to occupationally-based demand shocks and less so by industry-based shocks, which would reflect a major shift in the functioning of regional labor markets. It is unclear how such a trend would affect regional adjustments to asymmetric economic shocks or the overall flexibility of the U.S. labor market. Future research could use micro-data to further explore the potential nexus between occupational mobility and dwindling U.S. internal migration, and the implications for U.S. regional labor market dynamics and economic performance.