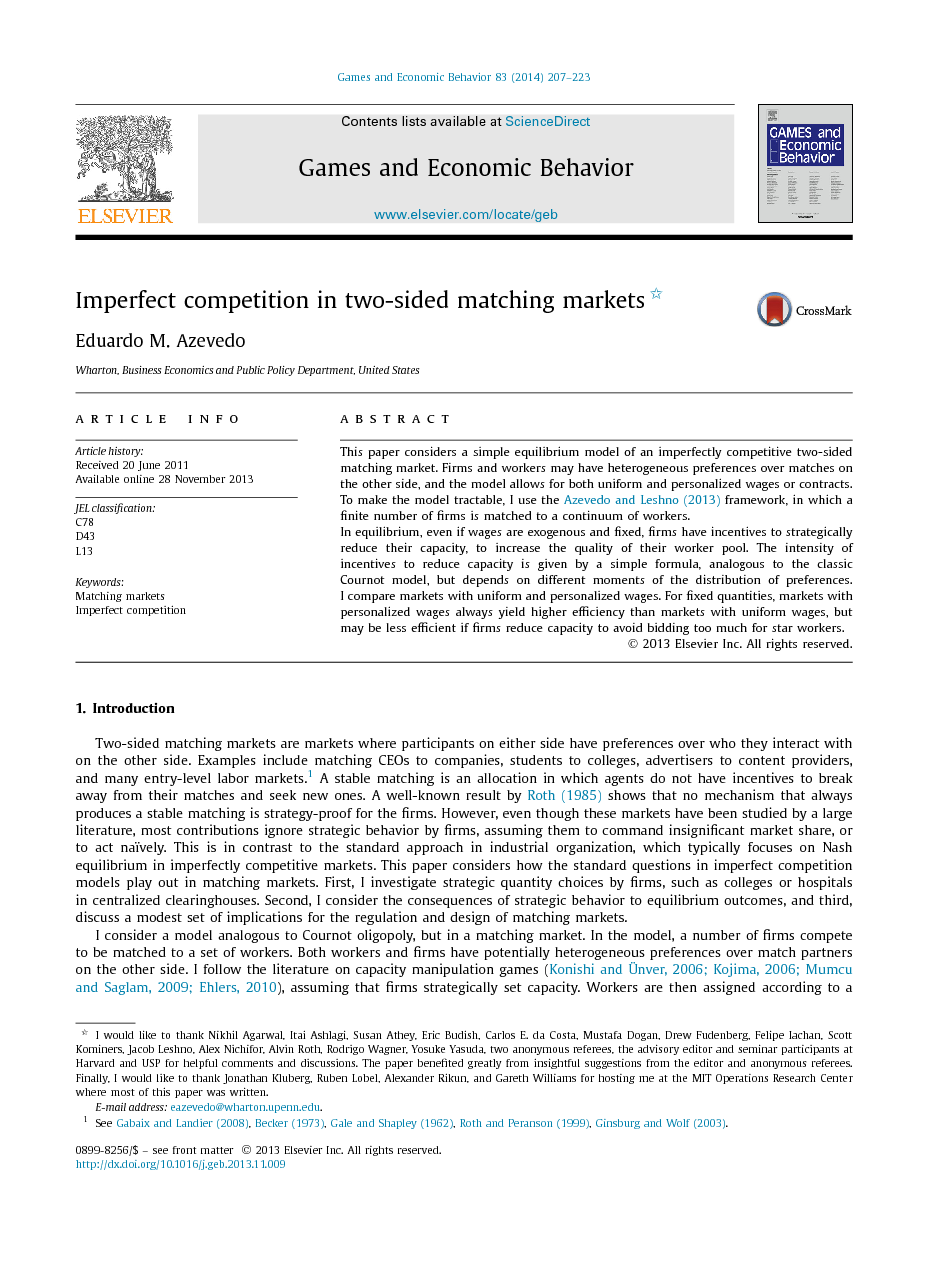 This paper considers a simple equilibrium model of an imperfectly competitive two-sided matching market. Firms and workers may have heterogeneous preferences over matches on the other side, and the model allows for both uniform and personalized wages or contracts. To make the model tractable, I use the Azevedo and Leshno (2013) framework, in which a finite number of firms is matched to a continuum of workers. In equilibrium, even if wages are exogenous and fixed, firms have incentives to strategically reduce their capacity, to increase the quality of their worker pool. The intensity of incentives to reduce capacity is given by a simple formula, analogous to the classic Cournot model, but depends on different moments of the distribution of preferences. I compare markets with uniform and personalized wages. For fixed quantities, markets with personalized wages always yield higher efficiency than markets with uniform wages, but may be less efficient if firms reduce capacity to avoid bidding too much for star workers.

This paper considers an equilibrium model of imperfect competition in many-to-one matching markets. This is a first step towards understanding firm behavior, and its implications for the design and regulation of matching markets. The main contribution is to extend standard price-theoretic insights of the Cournot model to matching markets, and understand to what extent these insights have to be modified. Market power induces a wedge between the marginal revenue of a firm, and the net productivity of a marginal hired worker. Interestingly, the determinants of the size of this wedge are very different when wages are uniform or personalized. With uniform wages, the wedge exists due to heterogeneous preferences between firms, which means that rejecting a worker may create a beneficial rejection chain. In contrast, when wages are personalized, the wedge exists because of aligned preferences. Firms that reduce capacity increase the pool of available workers, which induces competitors to bid less aggressively for workers that both firms covet. As an application, these insights contribute to the debate over the desirability of uniform versus flexible wages. We have seen that taking strategic capacity setting into account qualifies the Bulow and Levin (2006) conclusion that flexible wages always generate more efficiency. In the Bulow and Levin model, if firms are allowed to choose capacity, flexible wages do produce higher matching efficiency given quantities, but they also give more incentives for firms to reduce capacities. Flexible wages are still more efficient if firms are sufficiently heterogeneous. However, if firms are very similar, so that the loss from matching inefficiency is small, uniform wages produce higher welfare, as they induce less capacity reduction. We note that, although this conclusion is intuitive, it relies on our assumption of quantity competition. It would be interesting to investigate to which extent it holds under other types of firm competition. An important limitation of the analysis is that we only consider quantity competition. While in industrial organization quantity competition models figure prominently, they are by no means the only models available. As such, the assumption of quantity competition should be seen as a first step towards understanding strategic behavior in matching markets. It would be interesting to explore matching markets in which firms have a different set of strategic variables at their disposal. For example, models where firms can differentiate themselves, tailor products to specific market segments, or misrepresent their preferences. An interesting application of analyzing behavior under different strategic variables is to compare different market design choices for centralized clearinghouses. For example, in the model of quantity competition we have shown that firms have incentives to reduce capacity. It can be shown that, if firms were to choose cutoffs, and quantities were assigned by market clearing, then in equilibrium firms would not have incentives to shade. This suggests that, in a market with perfect information and no aggregate randomness, in which firms cannot misreport their preference rankings, a clearinghouse in which firms choose cutoffs would perform better than one in which they report capacities. Naturally, this conclusion is subject to the caveat that, if there is some aggregate randomness in the market, having firms report cutoffs subjects them to the risk of getting too many or too few workers. Therefore, the comparison between these two rules will depend on the cost of firms matching to a number of workers that is different than ideal, on the level of aggregate randomness, and on whether firms can misrepresent preference orderings. Nevertheless, comparing different matching mechanisms by their equilibrium properties is an interesting direction for research, and is complementary to the axiomatic approach that most of the literature takes.