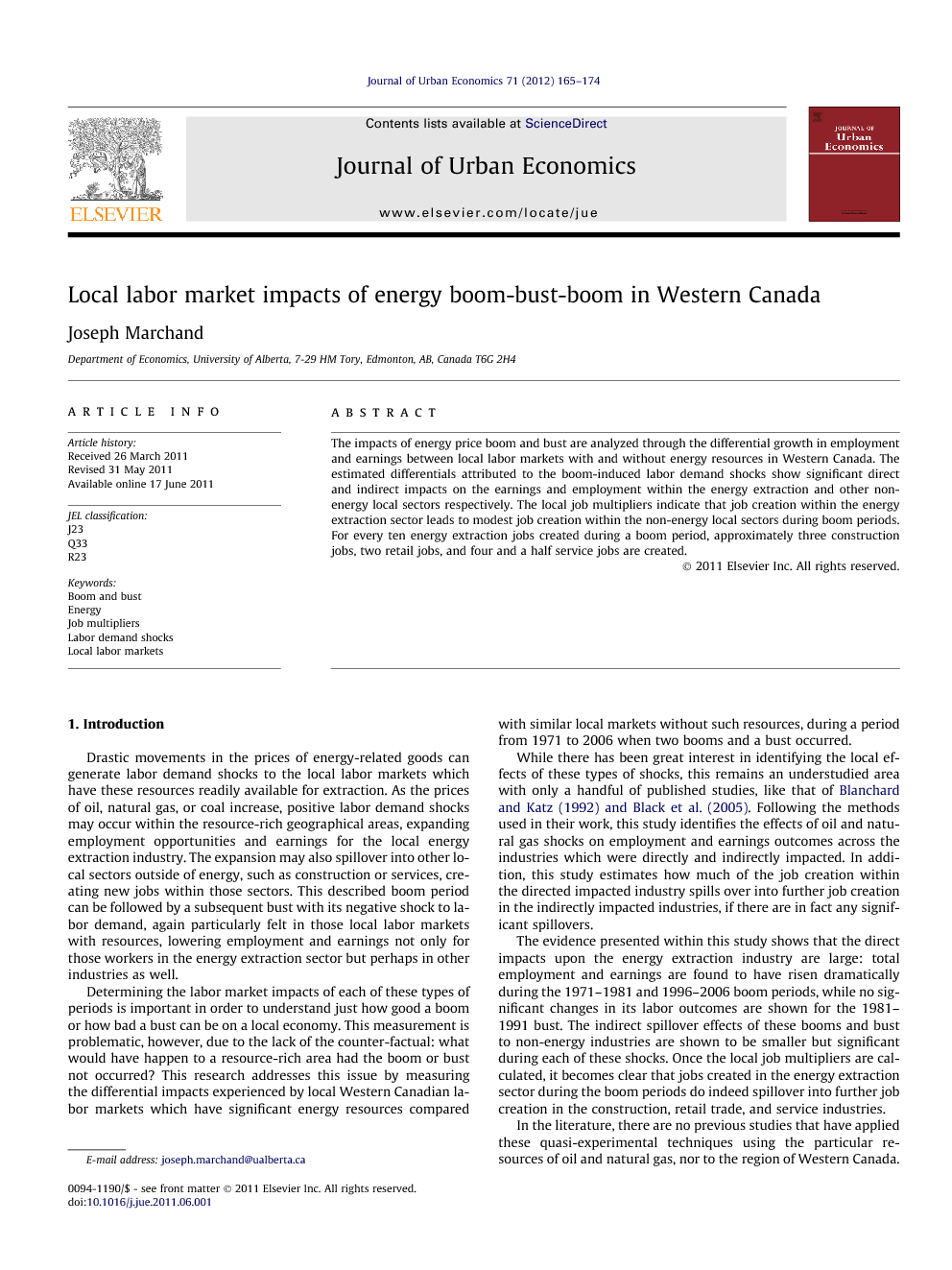 The impacts of energy price boom and bust are analyzed through the differential growth in employment and earnings between local labor markets with and without energy resources in Western Canada. The estimated differentials attributed to the boom-induced labor demand shocks show significant direct and indirect impacts on the earnings and employment within the energy extraction and other non-energy local sectors respectively. The local job multipliers indicate that job creation within the energy extraction sector leads to modest job creation within the non-energy local sectors during boom periods. For every ten energy extraction jobs created during a boom period, approximately three construction jobs, two retail jobs, and four and a half service jobs are created.

Drastic movements in the prices of energy-related goods can generate labor demand shocks to the local labor markets which have these resources readily available for extraction. As the prices of oil, natural gas, or coal increase, positive labor demand shocks may occur within the resource-rich geographical areas, expanding employment opportunities and earnings for the local energy extraction industry. The expansion may also spillover into other local sectors outside of energy, such as construction or services, creating new jobs within those sectors. This described boom period can be followed by a subsequent bust with its negative shock to labor demand, again particularly felt in those local labor markets with resources, lowering employment and earnings not only for those workers in the energy extraction sector but perhaps in other industries as well. Determining the labor market impacts of each of these types of periods is important in order to understand just how good a boom or how bad a bust can be on a local economy. This measurement is problematic, however, due to the lack of the counter-factual: what would have happen to a resource-rich area had the boom or bust not occurred? This research addresses this issue by measuring the differential impacts experienced by local Western Canadian labor markets which have significant energy resources compared with similar local markets without such resources, during a period from 1971 to 2006 when two booms and a bust occurred. While there has been great interest in identifying the local effects of these types of shocks, this remains an understudied area with only a handful of published studies, like that of Blanchard and Katz, 1992 and Black et al., 2005. Following the methods used in their work, this study identifies the effects of oil and natural gas shocks on employment and earnings outcomes across the industries which were directly and indirectly impacted. In addition, this study estimates how much of the job creation within the directed impacted industry spills over into further job creation in the indirectly impacted industries, if there are in fact any significant spillovers. The evidence presented within this study shows that the direct impacts upon the energy extraction industry are large: total employment and earnings are found to have risen dramatically during the 1971–1981 and 1996–2006 boom periods, while no significant changes in its labor outcomes are shown for the 1981–1991 bust. The indirect spillover effects of these booms and bust to non-energy industries are shown to be smaller but significant during each of these shocks. Once the local job multipliers are calculated, it becomes clear that jobs created in the energy extraction sector during the boom periods do indeed spillover into further job creation in the construction, retail trade, and service industries. In the literature, there are no previous studies that have applied these quasi-experimental techniques using the particular resources of oil and natural gas, nor to the region of Western Canada. This is somewhat surprising given the greater reliance of this economy on energy resource production, as well as the relative global importance of the energy resources produced in this region. This is also the first study that was able to generalize the localized impacts of energy price shocks by analyzing over more than one historical boom event within the same region. This paper aims to contribute to the literature by using this unique experiment in its valuable setting in order to better understand the labor market consequences of shocks to the resource sector. The structure of this paper is as follows. Section 2 provides a brief review of the relevant literature and contains the background on the recent historical price trends in oil and natural gas. Section 3 displays where the resources are contained within Western Canada and discusses the methodology of the study and the data sources. Section 4 presents all of the results of this study, including the differential earnings and employment effects, the differential population effects, and the local job multiplier evidence. Section 5 concludes the paper. The disclaimer, acknowledgments, references, and appendix tables then follow.

This paper measures the local labor market impacts of energy boom and bust using a quasi-experimental methodology which has not been previously applied to the oil and natural gas sector in Canada. Each boom and bust in energy prices provides a positive or negative shock to labor demand that particularly affects the resource-rich geographical areas. Similar areas without energy resources serve as a proxy for the counter-factual: what would have occurred to the energy-rich areas in the absence of the boom or bust. The differential growth between these two area types is used to identify the impacts of these shocks upon Western Canadian local labor markets from 1971 to 2006. The evidence presented in this paper shows that the direct impacts of each boom lead to substantial gains in total earnings and employment within energy extraction, while the bust period is one of stagnation for this industry. The indirect impacts to the employment and earnings of the non-energy sectors are smaller than that of energy extraction, but are still significant in both boom periods, and some even display growth in outcomes during the bust period (with the exception of earnings per worker). Once these non-energy industries are disaggregated into several local sectors and a traded sector, further clarity is brought to the story. The local industries of construction, retail trade, and services all show similar significant gains in total employment and earnings in the first boom, with the gains being significant but smaller during the second boom. That said, gains in earnings per worker are greater for the second boom than for the first. During the bust period, all of these local industries experience a loss in earnings per worker. A significant drop in total earnings for construction and small employment gains for retail and services are also shown during this period. For the traded goods industry represented by manufacturing, significant gains are reported for both booms in both earnings measures but they are smaller in magnitude than those gains shown for each of the local industries. During the bust, these gains in total earnings and earnings per worker continue for manufacturing, indicating that individuals skilled in energy extraction may be finding a place in manufacturing during the bust. Job creation in the energy extraction sector is found to exhibit modest positive spillovers into local sectors such as construction, retail, and especially services during each boom period. Remarkably, the job multiplier estimates for each boom period were similar in magnitude or greater for the second boom, even though the first boom exhibited larger changes in energy extraction employment than the second boom. The generalized boom estimates indicate that for every ten energy extraction jobs created, a boom period creates roughly three construction jobs, two retail trade jobs, and four and a half service jobs.