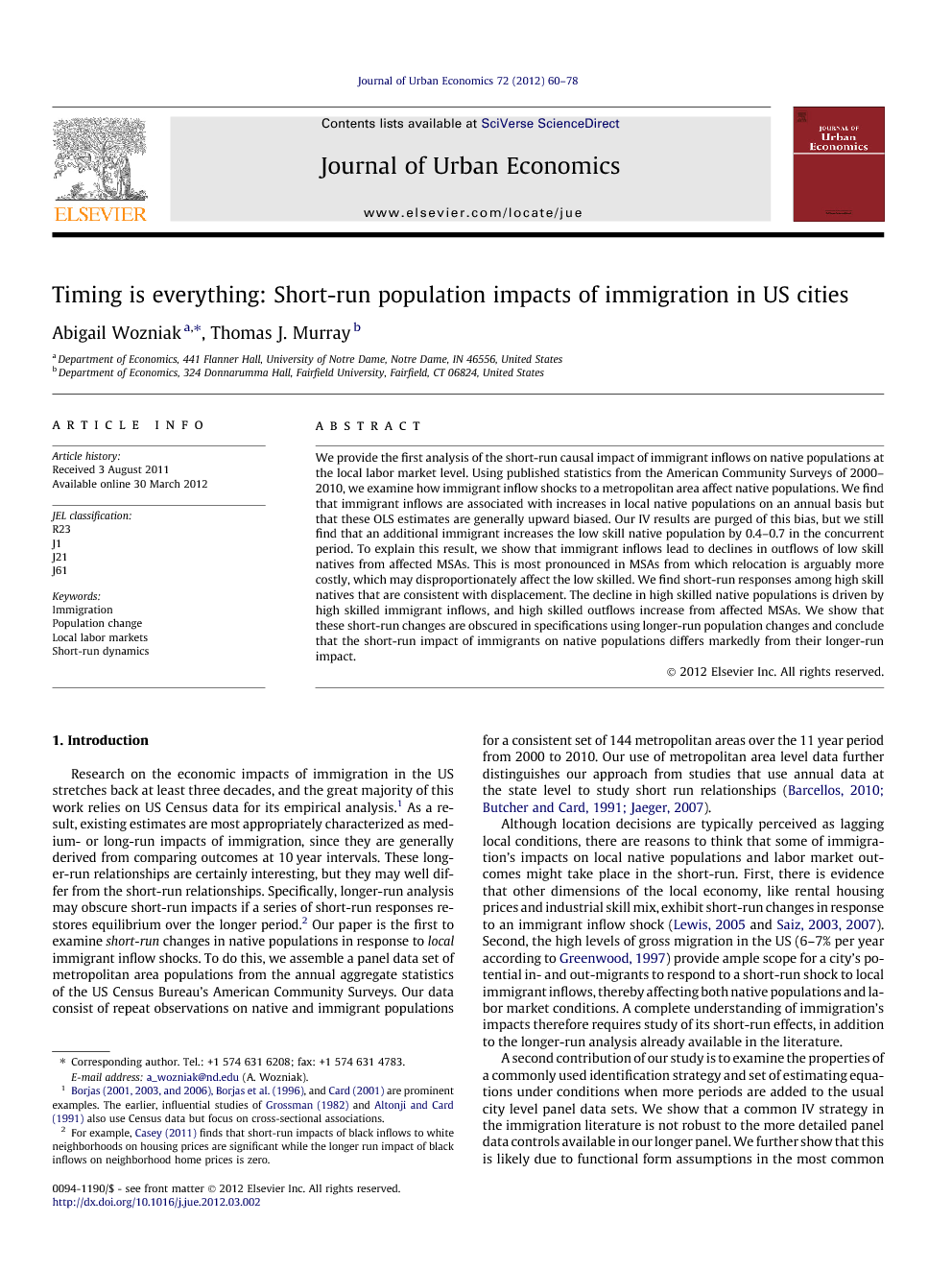 Research on the economic impacts of immigration in the US stretches back at least three decades, and the great majority of this work relies on US Census data for its empirical analysis.1 As a result, existing estimates are most appropriately characterized as medium- or long-run impacts of immigration, since they are generally derived from comparing outcomes at 10 year intervals. These longer-run relationships are certainly interesting, but they may well differ from the short-run relationships. Specifically, longer-run analysis may obscure short-run impacts if a series of short-run responses restores equilibrium over the longer period.2 Our paper is the first to examine short-run changes in native populations in response to local immigrant inflow shocks. To do this, we assemble a panel data set of metropolitan area populations from the annual aggregate statistics of the US Census Bureau’s American Community Surveys. Our data consist of repeat observations on native and immigrant populations for a consistent set of 144 metropolitan areas over the 11 year period from 2000 to 2010. Our use of metropolitan area level data further distinguishes our approach from studies that use annual data at the state level to study short run relationships ( Barcellos, 2010, Butcher and Card, 1991 and Jaeger, 2007). Although location decisions are typically perceived as lagging local conditions, there are reasons to think that some of immigration’s impacts on local native populations and labor market outcomes might take place in the short-run. First, there is evidence that other dimensions of the local economy, like rental housing prices and industrial skill mix, exhibit short-run changes in response to an immigrant inflow shock (Lewis, 2005 and Saiz, 2003 and Saiz, 2007). Second, the high levels of gross migration in the US (6–7% per year according to Greenwood, 1997) provide ample scope for a city’s potential in- and out-migrants to respond to a short-run shock to local immigrant inflows, thereby affecting both native populations and labor market conditions. A complete understanding of immigration’s impacts therefore requires study of its short-run effects, in addition to the longer-run analysis already available in the literature. A second contribution of our study is to examine the properties of a commonly used identification strategy and set of estimating equations under conditions when more periods are added to the usual city level panel data sets. We show that a common IV strategy in the immigration literature is not robust to the more detailed panel data controls available in our longer panel. We further show that this is likely due to functional form assumptions in the most common estimating equations, and we propose an alternative set of estimating equations and control variables to deal with the problem. We begin our analysis by estimating correlations between annual changes in native and immigrant populations. We focus on population changes because, after wage impacts, the question of whether immigrants encourage natives to leave an affected local labor market and “arbitrage with their feet” is a central question in the immigration literature. High quality local population variables are also a strength of the ACS in the period we use. We model an immigrant inflow as a single shock and allow responses to that shock to differ across native skill groups.3 Our OLS results show that observed immigrant inflows are associated with increases in local native populations in the current period. Although these results are descriptive, they show that the correlations between native population changes and immigrant inflows are positive and economically large. We then examine the causal impact of immigrant inflow shocks on native populations using our preferred instrumental variables approach. We show that the OLS correlations are generally upward biased. The causal impact of immigrant inflows on the high skilled and total native populations are smaller than suggested by OLS, and of opposite sign in the case of the high skilled. OLS and IV estimates are indistinguishable for low skill natives. The causal impact of an additional immigrant in the current year is an increase of 0.42–0.65 low skill natives while an additional immigrant from the previous year reduces the high skill population by 0.38–0.58. The final contribution of our study is to highlight and examine these differential responses to immigrant inflows across native skill groups. We first show that although our results differ from those in the literature based on longer-period changes, similar results can be obtained by restructuring our data to use long-period changes rather than the short-run changes that are our focus. Next, we provide evidence of displacement for high skilled natives – a group that is more geographically mobile than the low skilled – that is consistent with the displacement hypothesis examined in detail in Borjas (2006). Specifically, we find that inflows of high skilled immigrants drive the negative impacts of immigrant inflows on the high skilled white population, and we find that immigrant inflows increase total outflows of high skilled natives from affected MSAs. We then show that our results for low skilled native populations are driven by decreases in outflows from affected MSAs. Finally, we find that our main results are attenuated in larger and less geographically isolated cities, but not in “booming” cities. We hypothesize that immigrant inflows provide a weak negative shock that causes outward mobility for the less skilled to decline temporarily, particularly in cities where isolation or low relative housing prices make relocation to a new market more costly. This suggests that low skill natives are temporarily “trapped” by immigrant inflows. We conclude that the short-run impacts of immigrant inflows differ markedly for both high and low skill workers from effects reported in the literature using longer-run population changes. We further conclude that there are important differences in short-run responses to immigrant inflows across native skill groups and across city types.

For roughly 30 years, economists have debated the impact of immigration on native labor market outcomes. This paper brings a useful new dataset to bear on these questions: annual population data on more than 140 metropolitan areas from the aggregate statistics of the American Community Survey for the period 2000–2010. Ours is the first paper to examine the impact of immigration on short-run population changes and labor market outcomes at the local labor market level. This new perspective provides a number of important insights. First, we show that a common combination of instrumental variables and estimating equations in the previous literature is not robust to the inclusion of the richer panel data controls made possible by annual metropolitan area level data. This raises questions about earlier conclusions based on this empirical combination. Second, we show that immigrant inflows to a metropolitan area are strongly positively correlated with native population increases at annual frequencies. Specifically, populations of all natives, low skill whites, and high skill whites all increase substantially alongside or in the year following an immigrant inflow. Third, using an improved instrumental variables technique and more robust empirical specifications than in previous studies, we show that the OLS correlations are generally upward biased. The causal impact of immigrant inflows on the high skilled native population is weakly negative, with our main estimates of the net decline ranging over −0.3 to −0.6 high skill natives for each additional immigrant. The arrival of an additional immigrant leads to an increase of 0.4–0.7 low skill natives in the same year, which is similar to the OLS relationship. The fact that we still estimate a positive effect of immigrant inflows on low skilled native populations after instrumenting is initially puzzling and contradicts the displacement hypothesis of the labor economics literature. However, we do not conclude that spatial displacement is not important. We find direct evidence in favor of the displacement hypothesis for high skilled whites, a group that is more geographically mobile than low skilled whites. Specifically, we find that inflows of high skilled immigrants drive the negative impacts of immigrant inflows more generally on the high skilled white population, and we find that immigrant inflow shocks significantly increase total outflows of high skilled natives from affected MSAs. In the case of high skilled natives, we conclude that displacement by high skilled immigrants is quantitatively important and occurs in the short-run. In this sense, our findings for this group are consistent with findings in Borjas (2006). Borjas’ study uses decadal Census data and therefore his estimates reflect longer-run adjustments, but as in the case of high skilled natives in our paper, he finds significant displacement of natives alongside inflows of immigrants in the same skill group.36 The story for low skilled natives is quite different. We show that our results for low skilled native populations are driven by decreased outflows from affected MSAs rather than increased inflows of natives from other areas. We further show that our main results are attenuated in larger and less geographically isolated MSAs, but not in “booming” MSAs, defined as those with population growth in the upper quartiles. Finally, we find no evidence that labor market outcomes improve for low skill natives in the short run as a result of an immigrant inflow. Together, these results suggest to us that low skill natives are temporarily “trapped” by immigrant inflows. We hypothesize that immigrant inflows provide a negative short-run shock that causes outward mobility for the less skilled to decline temporarily. The impact is largest in cities that are more costly to move from – specifically, isolated cities, which entail a longer distance move to reach a new labor market, and smaller cities, which have lower housing costs than large ones and therefore entail a negative housing price shock for outmigrants. These costs may disproportionately affect low skill natives. It is important to remember that our estimates are short-run impacts. We show that our results are consistent with other analyses of the impact of immigrant inflows on local population change in the sense that by using longer-period changes in our data, we obtain estimates similar to those in other studies using longer-run changes in earlier decades. Our findings show very different short-run relationships, suggesting that data at longer intervals obscure important dynamics in the native location adjustment process. Although our short-run impacts for high skilled natives are similar to those Borjas (2006) finds for all skill groups in the longer-run, our short-run findings for low skill natives differ from his findings. In sum, our short-run findings do not match any of the available studies on the longer-run impacts of immigrants on population adjustment.37 Future research should explore these short-run adjustment processes in more detail, as soon as adequate data are available for the analysis.