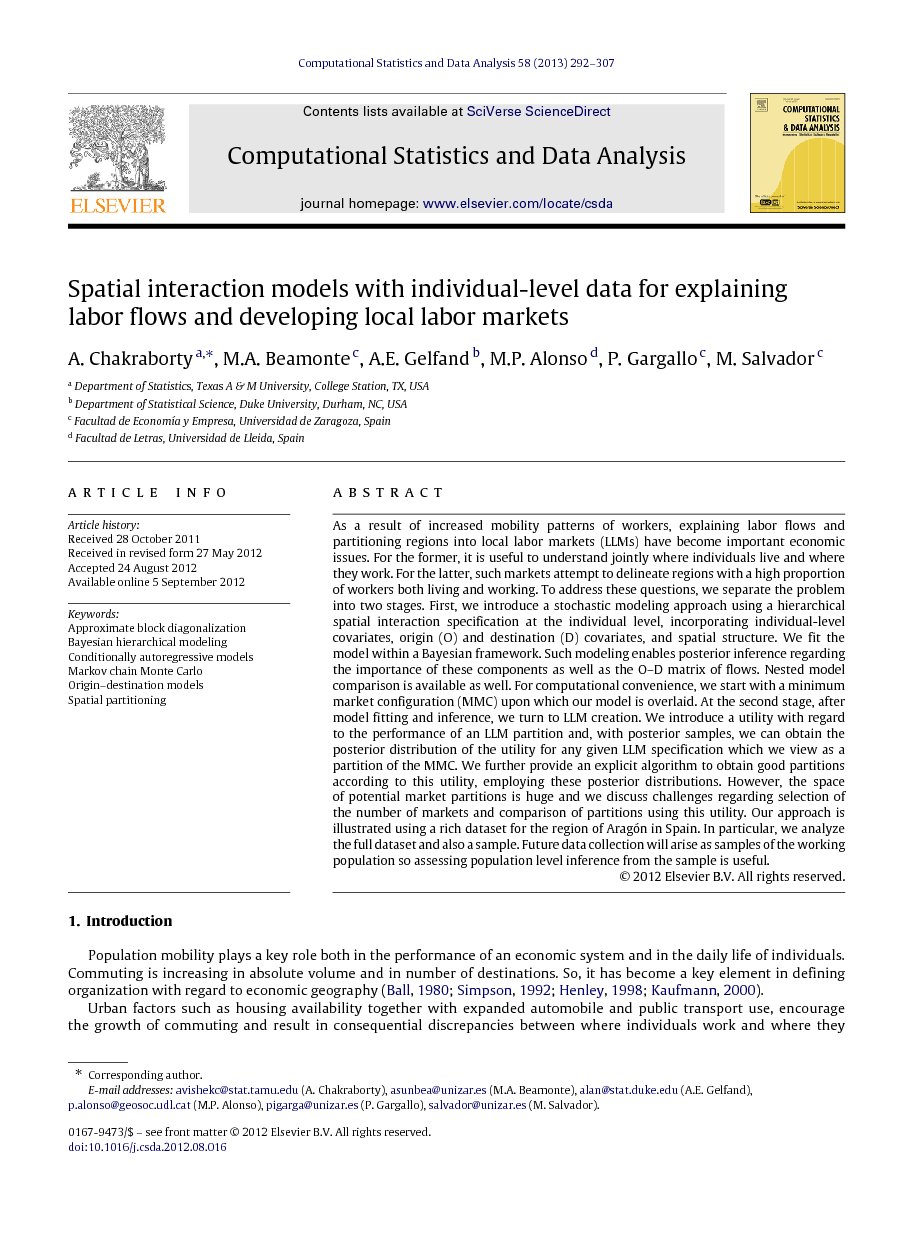 As a result of increased mobility patterns of workers, explaining labor flows and partitioning regions into local labor markets (LLMs) have become important economic issues. For the former, it is useful to understand jointly where individuals live and where they work. For the latter, such markets attempt to delineate regions with a high proportion of workers both living and working. To address these questions, we separate the problem into two stages. First, we introduce a stochastic modeling approach using a hierarchical spatial interaction specification at the individual level, incorporating individual-level covariates, origin (O) and destination (D) covariates, and spatial structure. We fit the model within a Bayesian framework. Such modeling enables posterior inference regarding the importance of these components as well as the O–D matrix of flows. Nested model comparison is available as well. For computational convenience, we start with a minimum market configuration (MMC) upon which our model is overlaid. At the second stage, after model fitting and inference, we turn to LLM creation. We introduce a utility with regard to the performance of an LLM partition and, with posterior samples, we can obtain the posterior distribution of the utility for any given LLM specification which we view as a partition of the MMC. We further provide an explicit algorithm to obtain good partitions according to this utility, employing these posterior distributions. However, the space of potential market partitions is huge and we discuss challenges regarding selection of the number of markets and comparison of partitions using this utility. Our approach is illustrated using a rich dataset for the region of Aragón in Spain. In particular, we analyze the full dataset and also a sample. Future data collection will arise as samples of the working population so assessing population level inference from the sample is useful.

We have proposed a flexible Bayesian hierarchical modeling approach, applied to a minimal market configuration, to develop posterior flow analysis across this configuration, with associated inference. We then introduced a utility function to create LLMs. This function rewards concentration, which quantifies the notion of a subregion where a large proportion of the workers both live and work. It turns the problem of LLM creation to one of partitioning the rows of a concentration matrix obtained through approximate diagonalization. After a stochastic search, using posterior samples from the hierarchical model fitting, we computed the posterior distribution of the utility for a top collection of partitions of the configuration. Each partition provides a map of LLMs. We have applied this approach, working with individual level data which provides the origin unit (where the worker lives) and the destination unit (where the worker works), driving time, along with individual level characteristics as well as origin unit and destination unit characteristics. Using both the full dataset and a sample of the data, we have created LLMs in the province of Aragón in Spain, and, for each dataset, supplied the top map we obtained. Perhaps, most importantly, we have clarified that it is not possible to develop a best map. Any approach to this problem will deal with exploration of an enormous map space within which a large number of maps will be indistinguishable under any utility function. Future work will find us adding a temporal aspect to the modeling. Then, we may study evolution and change in market structure over time as well as forecast change in market structure as a function of change in population demographics, change in characteristics of localities, and change in driving distance.