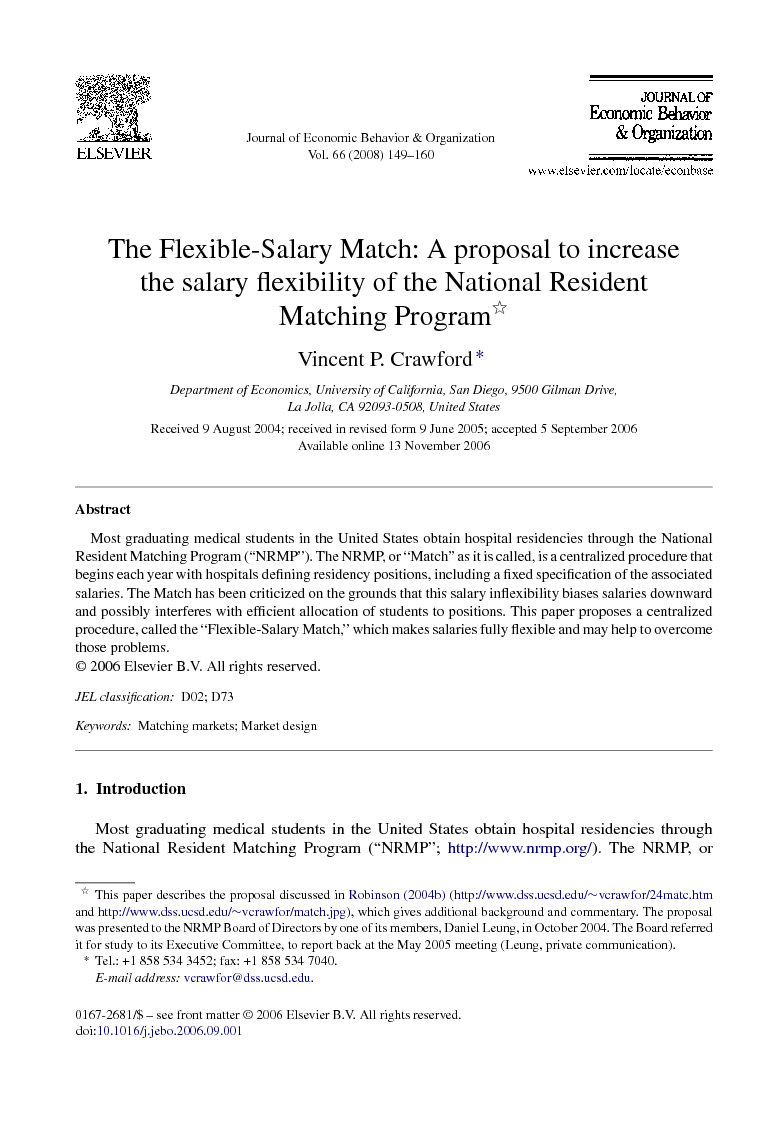 Most graduating medical students in the United States obtain hospital residencies through the National Resident Matching Program (“NRMP”). The NRMP, or “Match” as it is called, is a centralized procedure that begins each year with hospitals defining residency positions, including a fixed specification of the associated salaries. The Match has been criticized on the grounds that this salary inflexibility biases salaries downward and possibly interferes with efficient allocation of students to positions. This paper proposes a centralized procedure, called the “Flexible-Salary Match,” which makes salaries fully flexible and may help to overcome those problems.

Most graduating medical students in the United States obtain hospital residencies through the National Resident Matching Program (“NRMP”; http://www.nrmp.org/). The NRMP, or “Match” as it is usually called, is a centralized procedure that begins each year with hospitals defining residency positions, including the associated salaries. Both students and hospitals then submit rankings of potential partners, taking hospitals’ predetermined positions and salaries into account.1 A computer algorithm is then used to match students and positions, keeping the rankings secret. Students and hospitals commit themselves in advance to abide by the results. Given hospitals’ positions and salaries, the computer algorithm works like the Gale and Shapley (1962)deferred-acceptance procedure, explained below, which they proposed as a model of decentralized adjustment processes in matching markets like those by which men and women sort themselves into marriages or students sort themselves into colleges. In a striking example of independent discovery, the deferred-acceptance procedure and the Match evolved separately. Their equivalence was first noted only much later, in Roth (1984b). Roth and Sotomayor (1990) give an overview of matching theory, including its application to the Match. The Match is generally agreed to be a workable and sensible way to match students and residency positions. It overcomes or mitigates some well-documented problems (unraveling of the timing of offers, misrepresentation of rankings, and recontracting, or the unwillingness of participants to abide by the results) that have arisen in decentralized professional labor markets, including the U.S. market for residencies before the Match was instituted ( Roth, 1984b, Roth, 2003, Roth and Peranson, 1999 and Niederle and Roth, 2003b). However, plaintiffs in a recent class-action antitrust suit ( Jung et al. versus Association of American Medical Colleges et al., 02-CV-00873 (DDC 2002)) have charged, among other things, that by having hospitals set salaries and other aspects of positions in advance of the matching process, the current Match stifles salary competition and thereby keeps residents’ salaries artificially low. 2 Residents’ salaries are in fact surprisingly low, given their duties and training, averaging less than $40,000 for an 80-hour work week. And in an illuminating analysis inspired in part by the lawsuit, Bulow and Levin (2006) have given theoretical support to the plaintiffs’ claim. In their model of markets organized like the Match, setting salaries in advance, together with the unpredictability of matching, effectively restricts hospitals to setting salaries for positions rather than students. Under plausible assumptions, this stifles competition and causes salary compression, making salaries lower than in a competitive market with match-specific salaries. Bulow and Levin also show that markets like the Match can interfere with Pareto-efficiency by limiting the salary variation needed to support the most productive matching of students to positions.3 Here, Pareto-efficiency is defined in the usual way, taking hospitals’ as well as students’ preferences into account, and given the full possibilities of the market, including flexible match-specific salaries. As explained below, the Match may still produce outcomes that are efficient in a restricted sense, with salaries assumed fixed at predetermined levels, but those outcomes may be Pareto-inferior to some attainable with flexible salaries. These arguments leave it less than certain that the current Match distorts salaries and causes inefficient allocation.4 But they do suggest that alternatives that allow more salary competition are worth considering. Thus far the plaintiffs in the lawsuit have focused on legal remedies that would make it easier for hospitals to hire outside the Match, and others have advocated eliminating the Match altogether (http://www.savetheresidents.com/index.asp). Both suggestions are motivated by a desire to move closer to the outcome of a decentralized market in which salaries (and other aspects of positions) are negotiated between hospitals and students along with the matching, coupled with a belief that no centralized procedure can mimic such an outcome. But given the well-documented problems in decentralized professional labor markets, it is unclear whether a decentralized residency market would be desirable, or even workable. This paper takes an alternate route by proposing a centralized procedure designed to mimic the outcome of a decentralized market, which I will call the “Flexible-Salary Match.” The Flexible-Salary Match gives students and hospitals the option of reporting rankings of potential partners that depend on salaries and adapts the current algorithm to consider such rankings in determining the matching and salaries, otherwise preserving the current structure of the Match. The adaptation uses algorithms introduced by Crawford and Knoer (1981), Kelso and Crawford (1982), and Roth (1984a) (henceforth “CKKR”), which generalize Gale and Shapley's deferred-acceptance procedure to allow salaries to be determined endogenously along with the matching. I will argue that the Flexible-Salary Match could be implemented with a moderate, voluntary increase in the complexity of submitted rankings and that it would allow the market to be cleared by flexible match-specific salaries, promoting Pareto-efficient allocation while avoiding the main problems of a decentralized market. The next section describes the U.S. market for residencies and the current Match, and reviews the relevant theory of matching markets. The following section introduces the proposed Flexible-Salary Match and reviews the associated theory. The section after that gives a detailed example comparing the current Match and the Flexible-Salary Match. The final section concludes by summarizing the case for the Flexible-Salary Match.

I have argued that the Flexible-Salary Match could be implemented with a moderate, voluntary increase in the complexity of reported rankings over the current Match. It also limits participants’ incentives to recontract just as the current Match does, and it is no more vulnerable to the problems caused by incentives to misrepresent rankings and failures of substitutability. It would allow the market to be cleared by flexible match-specific salaries, promoting Pareto-efficient allocation while avoiding the main problems of a decentralized market. By contrast, the current Match yields matchings that are efficient only in a restricted sense, taking salaries as given, and may therefore be Pareto-inferior to the outcomes of the Flexible-Salary Match. Probably the most important concern not yet discussed is the likely increase in the costs to hospitals of hiring residents. Here there is a useful analogy with academic labor markets for new Ph.D.s, which have many similarities to the Match. Universities and hospitals have similar funding sources and budget constraints, the importance of institutional prestige is comparable, and the morale effects of different salaries for different people in the same job are similar. Among elite universities, there was for many years a “gentleman's agreement” not to compete on salary. The result was a decentralized, sequential process that cleared the market without adjusting salaries, much as the centralized Match does now. The custom then began to erode, and there was a gradual transition to more vigorous salary competition, making the process more like a decentralized market, or the Flexible-Salary Match. Although salaries rose, universities found the money to pay them, and there were no other serious problems. This analogy suggests that under the Flexible-Salary Match there would also be a smooth transition to more vigorous salary competition in the market for residencies and that it would yield comparable benefits in allocative efficiency and increased salaries for students. The costs to hospitals would probably be higher, but they would be partly compensated by more efficient matching of students to their positions. In the end, the question is whether society should try to alleviate the budgetary problems of hospitals by organizing the market for residencies in a way that yields inefficient and, arguably, unfair allocations, or search instead for some better way.