عنوان انگلیسی
Why do so few women work in New York (and so many in Minneapolis)? Labor supply of married women across US cities
دانلود فوری مقاله + سفارش ترجمه 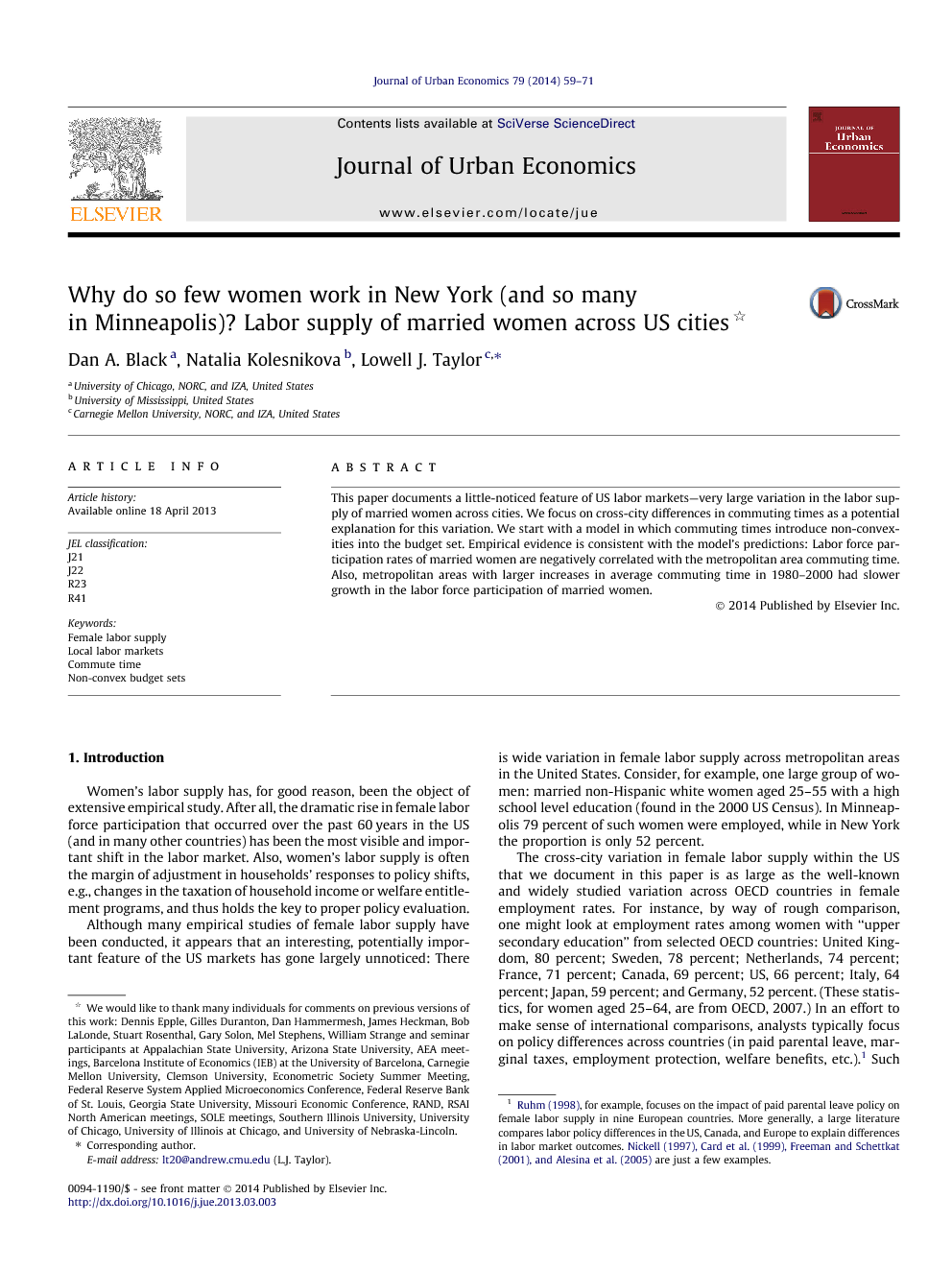 Using Census Public Use Micro Sample (PUMS) data for 1940 through 2000, we find wide variation in labor market participation rates of white married women in 50 large US metropolitan areas. This wide variation is found in all years and appears for women with different levels of education, as well as for women with and without children. Among a number of explanations for observed cross-city differences in female labor supply one emerges as particularly important: Married women’s labor force participation decisions appear to be related to MSAs’ commuting times. While the possibility that fixed employment costs might matter for female labor supply was raised in the literature many years ago (e.g., Oi, 1976 and Cogan, 1981), we know of no work that has explored implications for the cross-city variation in labor supply. With this in mind we have undertaken an analysis that, first, sets out a simple theory of labor supply. In our theoretical exploration, we emphasized that an increase in the commuting cost c can be expected to reduce labor force participation of married women, while at the same time increasing the number of hours worked by working husbands. Cross-section evidence is consistent with the theory. We find a negative association between commuting time and women’s labor force participation rates in the three decades for which we have commuting time data (1980, 1990, and 2000). Similarly, the negative correlation between commuting times and participation appears also in a differences-in-differences analysis; metropolitan areas that experienced relatively large increases in average commuting times between 1980 and 2000 experienced slower growth of labor force participation of married women. For women, the effects of commute times are quite large. From Table 5 we see that a 1-min increase in an MSA’s commute time is associated with an approximately 0.3 percentage point decline in the labor force participation of women with a high school education. 38Table 4 indicates that the difference in commute times, from the shortest-commute MSA to the longest-commute MSA, is 33 min. Taking our estimates at face value, this variation might be expected to lead to a 10 percentage point difference in participation across cities. Commute time differences across MSAs thus plausibly “explain” a fair amount of the cross-MSA variation in participation observed in Table 1. It might be reasonable to ask, indeed, if our estimates are “too big”. One might reason that a 30-min increase in commute time presents an opportunity cost of only $10 daily for a woman who earns $20/hour. Could such a modest factor plausibly have such a large impact on behavior? In thinking about that issue it is important to recognize that the cost to a typical mother of living in a high-commute MSA extends far beyond the increased time she spends commuting if she works. As we noted above, in congested cities there will be additional time required for travel to the grocery store, piano lessons, or little league baseball. If she chooses to commute a long distance to work, a mother will likely be farther from her children’s school, which can make life difficult when she needs to be available for a parent-teacher conference or a class play. Our estimates are not picking up the pure effect of the commute time of the participation decision, but the total impact of congestion on the participation decision. One implication of our work concerns the century-long increase in the female labor force participation—the increase in married women’s participation from only about 7 percent in 1900 to current rates (near 70 percent). There are doubtless many factors contributing to this trend, many of which have received careful examination in the literature. Little attention has been given, though, to the possibility that part of this trend is due to the reduction in commuting costs, owing to improvements in transportation technology—the expansion of modern public transportation, the introduction and continued improvement in automotive technology, improvements in roads, and so on—and changes in residential patterns. Our findings about the wide cross-city variation in the labor force participation of married women also introduce a new dimension to the current discussion about trends in the female labor supply. In particular, these findings complicate discussions about women having reached a “natural rate” of labor force participation. The issue is how close to 1 we can expect this participation rate to be. Goldin, 2006 and Juhn and Potter, 2006, and others show that labor force participation rates depend on a combination of demographic factors such as age, presence of children, education, and race. The “natural rate” of participation is expected to be different for different groups. Our research suggests that the maximum achievable rate of labor force participation for each group would also vary across cities (and also across countries) because of differences in commuting time. Of course, commuting times in local communities also depend on population density, the resources devoted to transportation, and local planning (e.g., zoning laws that may sometimes serve to isolate residential communities from job locations). Thus, from a public policy perspective, it may be that targeted actions that reduce commuting times would thereby increase labor force participation by women.39 Yet another open policy issue concerns the importance of variation in labor supply across cities for tax and welfare policy. It would be interesting to analyze how differences in the time cost of commuting affect labor supply responses to changes in such policies. Finally, we note that most empirical research in labor economics is conducted at the national level, with little attention given to the possibility that local labor markets differ in important ways. Our research points to the value of work that allows for the possibility of differences across locations in labor supply responses. More generally, there is surely a rich set of interesting issues yet to be examined around the interactions of urban characteristics and labor market outcomes.