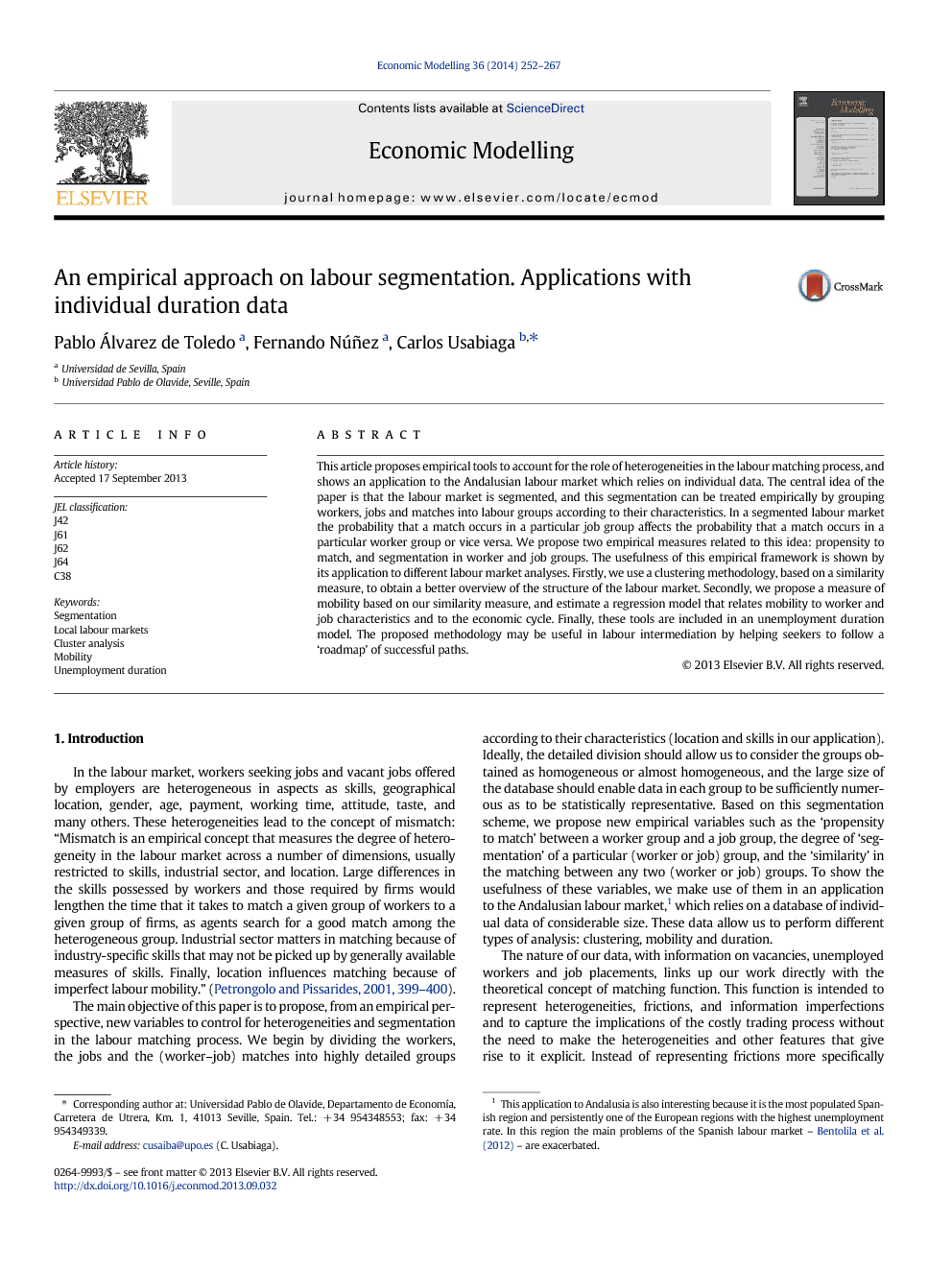 This article proposes empirical tools to account for the role of heterogeneities in the labour matching process, and shows an application to the Andalusian labour market which relies on individual data. The central idea of the paper is that the labour market is segmented, and this segmentation can be treated empirically by grouping workers, jobs and matches into labour groups according to their characteristics. In a segmented labour market the probability that a match occurs in a particular job group affects the probability that a match occurs in a particular worker group or vice versa. We propose two empirical measures related to this idea: propensity to match, and segmentation in worker and job groups. The usefulness of this empirical framework is shown by its application to different labour market analyses. Firstly, we use a clustering methodology, based on a similarity measure, to obtain a better overview of the structure of the labour market. Secondly, we propose a measure of mobility based on our similarity measure, and estimate a regression model that relates mobility to worker and job characteristics and to the economic cycle. Finally, these tools are included in an unemployment duration model. The proposed methodology may be useful in labour intermediation by helping seekers to follow a ‘roadmap’ of successful paths.

In this paper we propose empirical tools to account for the role of heterogeneities in search and matching theories applied to labour economics, and we show an application to the Andalusian labour market, by using a large database of individual data. We have analysed the concept of labour market segmentation and proposed empirical measures related to this concept: propensity to match, and segmentation in worker and job groups. The results of our application show a high degree of segmentation. We use a clustering methodology, based on a similarity measure, to attain a better overview of the structure of the labour market and to reduce the large number of worker and job groups to a manageable number of clusters. We show in which way the worker–job clusters with high propensity to match that are formed may be considered labour market clusters. The clustering again highlights a high degree of segmentation, which is reflected in labour market clusters with high propensity to match, but these clusters are not ‘pure islands’, as shown by the existence of worker–job groups with high propensity to match outside these clusters. A measure of mobility in each worker–job match is proposed, directly related to our similarity measure, and a regression model is then estimated that relates mobility to worker and job characteristics and to the economic cycle. Mobility is higher, the higher the worker mobility in previous matches, the lower the segmentation of the worker or job group, the lower the tightness in the worker group, or the higher the tightness in the job group. With few exceptions, no significantly different effects are obtained for other variables usually included in studies in this field. The results of the regression model are used to estimate the ‘a priori’ workers' willingness to move. We show the usefulness of the tools that we have developed by including them in an unemployment duration model along with other conventional variables. The unemployment duration is higher for workers with lower willingness to move, and for those with higher segmentation or with lower tightness within their worker group. These overall results may change when we take into account the different types of exits. For example, lower willingness to move and higher segmentation in the worker group, which implies less competition from external workers, reduces unemployment duration for matches in the worker's own group (matches without mobility). Unemployment duration is also lower for workers with lower tightness in their worker group when matches take place outside the worker's own group (matches with mobility), which indicates that these workers experience a clear incentive to move. The hazard rate of the worker tends to fall with duration except in the first days of search. Again, no significantly different effects are obtained for other variables commonly included in previous literature in this field. Worker mobility, geographical or occupational, and the availability of relevant information are important requirements for effective labour matching, and constitute a prominent element that should be taken into account to guide the design of active labour market policies. The empirical tools proposed in this paper may be useful in this regard, by helping jobseekers and firms looking for workers to follow successful paths previously used by others. In this sense, the clustering methodology allows past information on matches to be processed in order to generate a ‘roadmap’ of possible routes to different labour market clusters, which can also include the probability of success in each route — a practical example of how this methodology might work can be found in Álvarez de Toledo et al. (2013). The versatility of the methodology proposed makes it possible to enrich the information provided from this perspective and to take into consideration other variables of interest, such as the best search channels for each cluster. Further research is required to test the practical usefulness of this methodology for real labour intermediation.