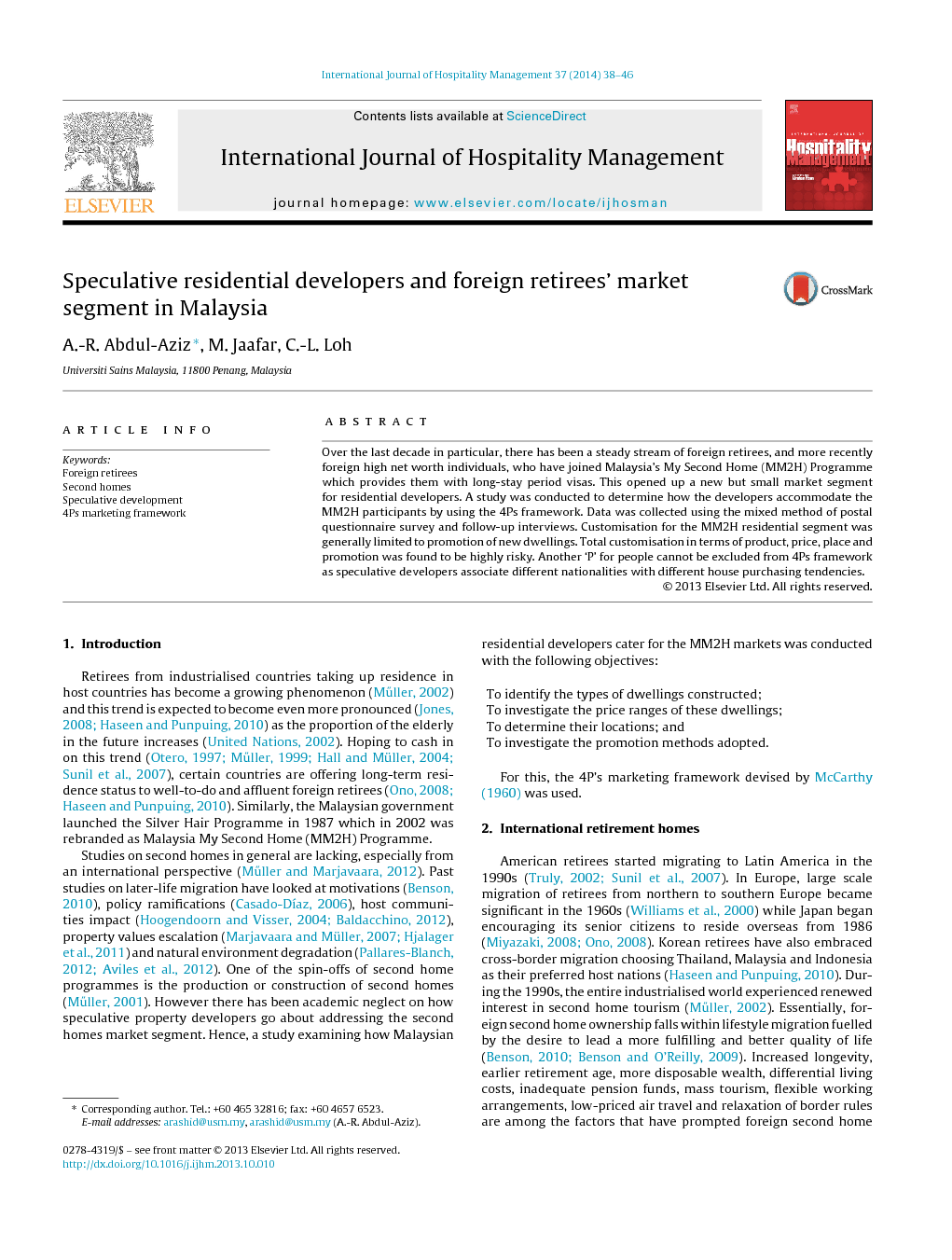 Over the last decade in particular, there has been a steady stream of foreign retirees, and more recently foreign high net worth individuals, who have joined Malaysia's My Second Home (MM2H) Programme which provides them with long-stay period visas. This opened up a new but small market segment for residential developers. A study was conducted to determine how the developers accommodate the MM2H participants by using the 4Ps framework. Data was collected using the mixed method of postal questionnaire survey and follow-up interviews. Customisation for the MM2H residential segment was generally limited to promotion of new dwellings. Total customisation in terms of product, price, place and promotion was found to be highly risky. Another ‘P’ for people cannot be excluded from 4Ps framework as speculative developers associate different nationalities with different house purchasing tendencies.

Retirees from industrialised countries taking up residence in host countries has become a growing phenomenon (Műller, 2002) and this trend is expected to become even more pronounced (Jones, 2008 and Haseen and Punpuing, 2010) as the proportion of the elderly in the future increases (United Nations, 2002). Hoping to cash in on this trend (Otero, 1997, Műller, 1999, Hall and Müller, 2004 and Sunil et al., 2007), certain countries are offering long-term residence status to well-to-do and affluent foreign retirees (Ono, 2008 and Haseen and Punpuing, 2010). Similarly, the Malaysian government launched the Silver Hair Programme in 1987 which in 2002 was rebranded as Malaysia My Second Home (MM2H) Programme. Studies on second homes in general are lacking, especially from an international perspective (Műller and Marjavaara, 2012). Past studies on later-life migration have looked at motivations (Benson, 2010), policy ramifications (Casado-Díaz, 2006), host communities impact (Hoogendoorn and Visser, 2004 and Baldacchino, 2012), property values escalation (Marjavaara and Müller, 2007 and Hjalager et al., 2011) and natural environment degradation (Pallares-Blanch, 2012 and Aviles et al., 2012). One of the spin-offs of second home programmes is the production or construction of second homes (Műller, 2001). However there has been academic neglect on how speculative property developers go about addressing the second homes market segment. Hence, a study examining how Malaysian residential developers cater for the MM2H markets was conducted with the following objectives: To identify the types of dwellings constructed; To investigate the price ranges of these dwellings; To determine their locations; and To investigate the promotion methods adopted. For this, the 4P's marketing framework devised by McCarthy (1960) was used.

This study addresses an area of international foreign retirement migration that has been erstwhile neglected, and that is the reaction of housing developers to this phenomenon. Catering to MM2H house buyers is a fairly recent phenomenon in Malaysia and only involves a small number of housing developers. The objectives of the research were to identify the types of dwellings which were constructed, their price ranges, locations and the promotion methods that were adopted. High-end vertical dwellings with its commonly associated features in urban settings close to various amenities but priced well beyond the government-set floor price and promoted using inexpensive means without making distinctions between nationalities are the most prevalent marketing package for MM2H house buyers. The case studies have also generated additional knowledge. Inactivity can still attract MM2H house buyers. However, most housing developers who actively seek to capture the MM2H market limit their money and energy to promotion only of development projects which in truth are conceived for the locals. Customising housing developments completely to suit one particular home country group is perilous. The research proposes that the 5Ps (product, price, place, promotion, people) framework is a more appropriate tool for analysing the actions of residential developers in addressing the dwelling needs of foreign retirees in a multi-nationality context.