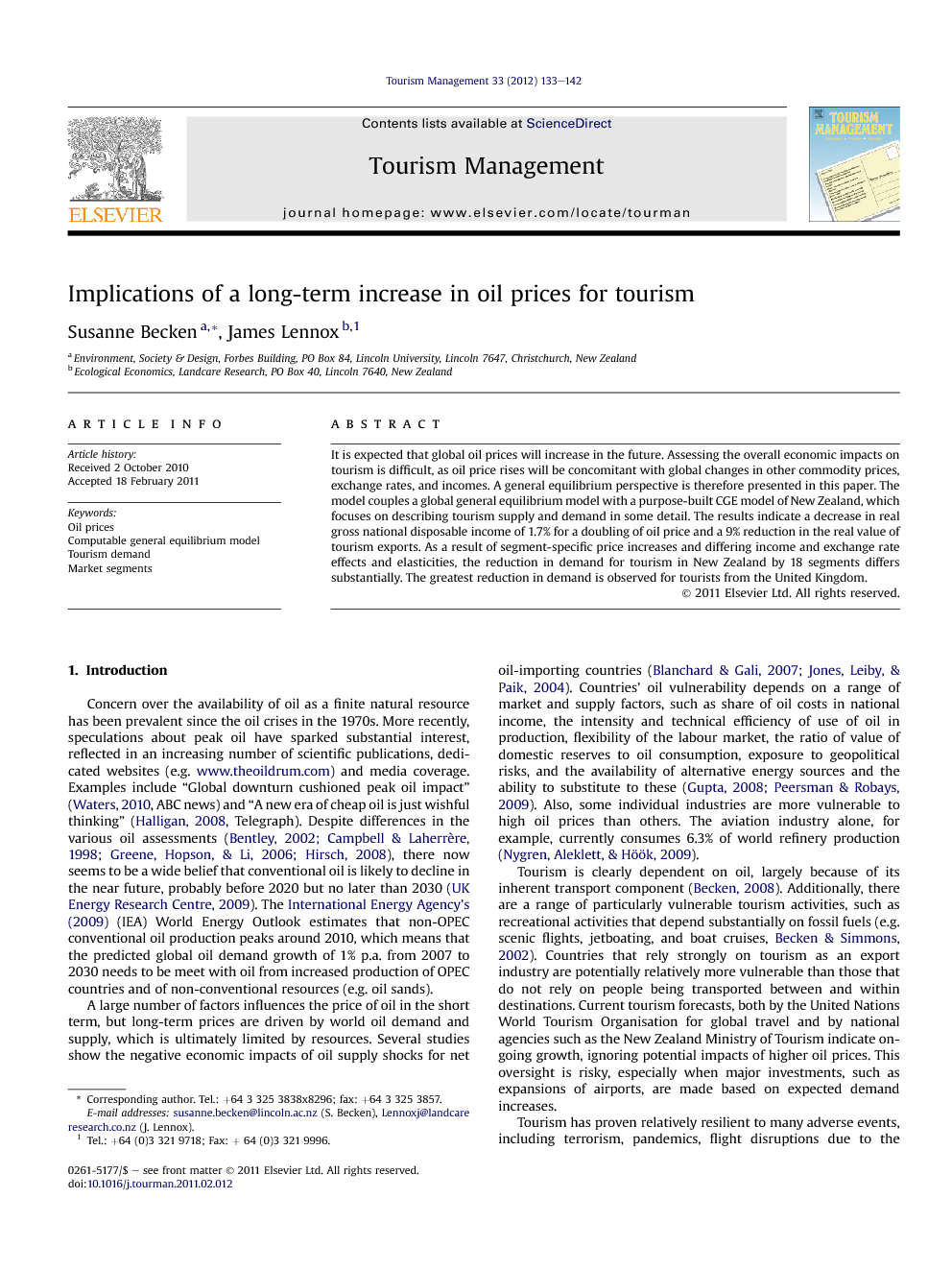 It is expected that global oil prices will increase in the future. Assessing the overall economic impacts on tourism is difficult, as oil price rises will be concomitant with global changes in other commodity prices, exchange rates, and incomes. A general equilibrium perspective is therefore presented in this paper. The model couples a global general equilibrium model with a purpose-built CGE model of New Zealand, which focuses on describing tourism supply and demand in some detail. The results indicate a decrease in real gross national disposable income of 1.7% for a doubling of oil price and a 9% reduction in the real value of tourism exports. As a result of segment-specific price increases and differing income and exchange rate effects and elasticities, the reduction in demand for tourism in New Zealand by 18 segments differs substantially. The greatest reduction in demand is observed for tourists from the United Kingdom.

Concern over the availability of oil as a finite natural resource has been prevalent since the oil crises in the 1970s. More recently, speculations about peak oil have sparked substantial interest, reflected in an increasing number of scientific publications, dedicated websites (e.g. www.theoildrum.com) and media coverage. Examples include “Global downturn cushioned peak oil impact” (Waters, 2010, ABC news) and “A new era of cheap oil is just wishful thinking” (Halligan, 2008, Telegraph). Despite differences in the various oil assessments (Bentley, 2002, Campbell and Laherrère, 1998, Greene et al., 2006 and Hirsch, 2008), there now seems to be a wide belief that conventional oil is likely to decline in the near future, probably before 2020 but no later than 2030 (UK Energy Research Centre, 2009). The International Energy Agency’s (2009) (IEA) World Energy Outlook estimates that non-OPEC conventional oil production peaks around 2010, which means that the predicted global oil demand growth of 1% p.a. from 2007 to 2030 needs to be meet with oil from increased production of OPEC countries and of non-conventional resources (e.g. oil sands). A large number of factors influences the price of oil in the short term, but long-term prices are driven by world oil demand and supply, which is ultimately limited by resources. Several studies show the negative economic impacts of oil supply shocks for net oil-importing countries (Blanchard and Gali, 2007 and Jones et al., 2004). Countries’ oil vulnerability depends on a range of market and supply factors, such as share of oil costs in national income, the intensity and technical efficiency of use of oil in production, flexibility of the labour market, the ratio of value of domestic reserves to oil consumption, exposure to geopolitical risks, and the availability of alternative energy sources and the ability to substitute to these (Gupta, 2008 and Peersman and Robays, 2009). Also, some individual industries are more vulnerable to high oil prices than others. The aviation industry alone, for example, currently consumes 6.3% of world refinery production (Nygren, Aleklett, & Höök, 2009). Tourism is clearly dependent on oil, largely because of its inherent transport component (Becken, 2008). Additionally, there are a range of particularly vulnerable tourism activities, such as recreational activities that depend substantially on fossil fuels (e.g. scenic flights, jetboating, and boat cruises, Becken & Simmons, 2002). Countries that rely strongly on tourism as an export industry are potentially relatively more vulnerable than those that do not rely on people being transported between and within destinations. Current tourism forecasts, both by the United Nations World Tourism Organisation for global travel and by national agencies such as the New Zealand Ministry of Tourism indicate on-going growth, ignoring potential impacts of higher oil prices. This oversight is risky, especially when major investments, such as expansions of airports, are made based on expected demand increases. Tourism has proven relatively resilient to many adverse events, including terrorism, pandemics, flight disruptions due to the volcanic ash cloud in April 2010, climate change concerns and high fuel prices. However, the extreme increase in operating costs for airlines in 2008 due to unprecedented prices for aviation fuel also meant, that despite the introduction of fuel charges, the global airline industry recorded record losses (in the order of US$ 5.2 billion for the year 2008, International Air Transport Association, 2008). Even if alternative fuels become commercially available for airlines they are still likely to be more expensive than present aviation fuel. Higher airfares in the future are likely to lead to reductions in travel and cause tourists to shift from more distant to closer destinations (e.g. Gillen, 2004). While some of the economic responses to higher oil prices are obvious, assessing the overall economic impacts on tourism is difficult. Long-term changes in global oil price rises will be concomitant with global changes in other commodity prices, exchange rates, and incomes. It is therefore important to consider the impacts of high oil prices on tourism from a general equilibrium perspective, rather than relying only on bottom-up, partial equilibrium approaches. This paper describes a two-stage modelling approach to construct and analyse high oil price scenarios for New Zealand. In the first stage, we use a global general equilibrium model to simulate a negative productivity shock to global oil production that causes a 100% increase in global oil prices. From these simulation results, we determine (a) macroeconomic impacts on tourist origin countries and so the effect on tourism demand from these countries, (b) the changes in relative prices of goods and services imported to and exported from New Zealand, and (c) changes in demand for New Zealand’s non-tourism exports. These changes are then analysed using a purpose-built CGE model of New Zealand, which focuses on describing tourism supply and demand in some detail.

This research showed that global oil scarcity leading to high oil prices has not only general negative macroeconomic impacts on net oil-importing countries, but also strong negative impacts on international tourism, especially in long-haul markets. Oil is a finite resource, and while the debates about the peaking of its global production and the availability of alternative liquid energy sources are on-going, there is little doubt that oil prices are likely to rise over the medium term future. International tourism is a discretionary and at the same time oil-intensive activity and therefore more vulnerable than many other economic activities. For long-distance destinations, in particular, this means that careful analyses of future markets are warranted. Such analysis should consider income effects in source countries, exchange rate changes, price sensitivities and different consumption behaviours. Other factors, such as ethical concerns and carbon footprints, are also increasingly important for some markets. It should also be noted that many of the factors driving global oil prices may also influence tourism impacts: for example, rising oil prices may reflect in part rising incomes in China and many other developing countries, which are likely to positively affect tourism demand for New Zealand and other destinations. The two-stage CGE modelling approach presented in this paper proved useful to understand better the economic implications of higher oil prices at a number of levels, including differentiated responses by 18 different market segments to New Zealand. The main limitation of this approach is its inability to account for substitution effects involving competing international tourism destinations. Developing partial or general equilibrium models that to account for international destination choices is empirically challenging. However, such models could have a wide range of application in research on international passenger transport and international tourism.