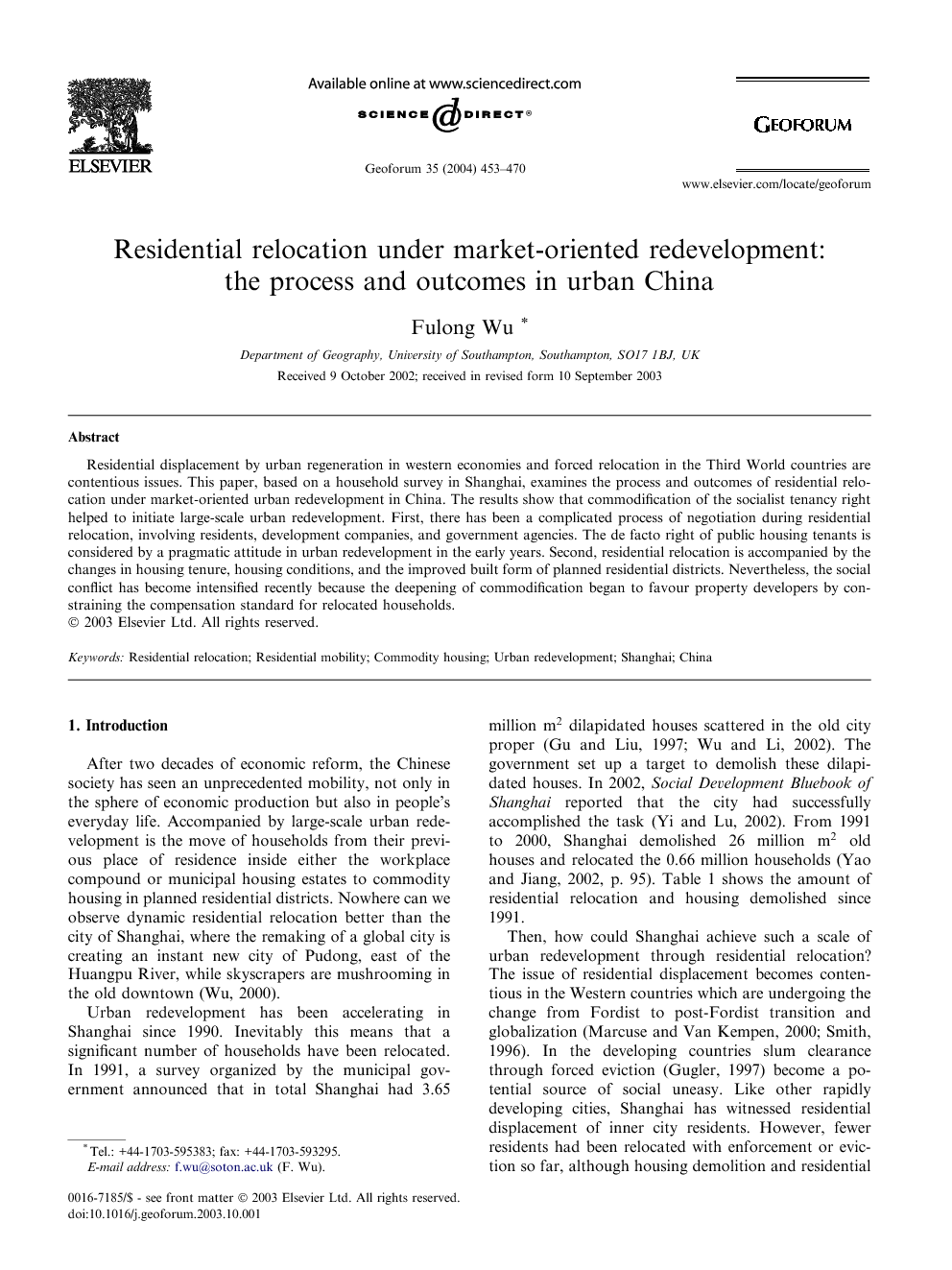 Residential displacement by urban regeneration in western economies and forced relocation in the Third World countries are contentious issues. This paper, based on a household survey in Shanghai, examines the process and outcomes of residential relocation under market-oriented urban redevelopment in China. The results show that commodification of the socialist tenancy right helped to initiate large-scale urban redevelopment. First, there has been a complicated process of negotiation during residential relocation, involving residents, development companies, and government agencies. The de facto right of public housing tenants is considered by a pragmatic attitude in urban redevelopment in the early years. Second, residential relocation is accompanied by the changes in housing tenure, housing conditions, and the improved built form of planned residential districts. Nevertheless, the social conflict has become intensified recently because the deepening of commodification began to favour property developers by constraining the compensation standard for relocated households.

After two decades of economic reform, the Chinese society has seen an unprecedented mobility, not only in the sphere of economic production but also in people's everyday life. Accompanied by large-scale urban redevelopment is the move of households from their previous place of residence inside either the workplace compound or municipal housing estates to commodity housing in planned residential districts. Nowhere can we observe dynamic residential relocation better than the city of Shanghai, where the remaking of a global city is creating an instant new city of Pudong, east of the Huangpu River, while skyscrapers are mushrooming in the old downtown (Wu, 2000). Urban redevelopment has been accelerating in Shanghai since 1990. Inevitably this means that a significant number of households have been relocated. In 1991, a survey organized by the municipal government announced that in total Shanghai had 3.65 million m2 dilapidated houses scattered in the old city proper (Gu and Liu, 1997; Wu and Li, 2002). The government set up a target to demolish these dilapidated houses. In 2002, Social Development Bluebook of Shanghai reported that the city had successfully accomplished the task ( Yi and Lu, 2002). From 1991 to 2000, Shanghai demolished 26 million m2 old houses and relocated the 0.66 million households ( Yao and Jiang, 2002, p. 95). Table 1 shows the amount of residential relocation and housing demolished since 1991.Then, how could Shanghai achieve such a scale of urban redevelopment through residential relocation? The issue of residential displacement becomes contentious in the Western countries which are undergoing the change from Fordist to post-Fordist transition and globalization (Marcuse and Van Kempen, 2000; Smith, 1996). In the developing countries slum clearance through forced eviction (Gugler, 1997) become a potential source of social uneasy. Like other rapidly developing cities, Shanghai has witnessed residential displacement of inner city residents. However, fewer residents had been relocated with enforcement or eviction so far, although housing demolition and residential relocation has become contentious recently. Discontented residents often appeal to the government or resist the decision of relocation. But organized social movement is still in its embryonic stage. The swift relocation of residents cannot be explained by the “authoritarian” state as the state itself is under transformation and has seen significant decentralization. Economic decentralization has led to the decreasing capacity of the state and the emergence of developmental interest (Lin, 1999; Logan, 2002; Wu, 2000). Market-oriented land development represents a profound change in the organization of urban construction and housing provision (Yeh and Wu, 1996; Zhou and Logan, 1996; Li, 2000). The changes brought by market-oriented redevelopment have made it possible to “commodify” de facto rights of pubic housing tenants, which in turn relocate them into a new place. Therefore, a large proportion of relocations (about two thirds from this sample) can be classified as “passive” relocation because the decision to move is not initiated by households themselves. So far there have been little studies on this issue of residential relocation. While the literature has begun to appear on residential mobility, housing tenure choice, and housing consumption and their spatial implications in China (e.g. Huang and Clark, 2002; Li, 2000; Li and Siu, 2001a and Li and Siu, 2001b; Li and Wu, in press; Logan et al., 1999; Wang and Murie, 2000; Yeh et al., 1995; Zhou and Ma, 2000; Wu, 2002), most studies tend to study residential mobility as an issue of housing consumption rather than linking residential relocation explicitly to urban redevelopment. In a previous paper, attention has been given to the `mode' of relocation and the effect of `stratification' from residential mobility perspective (Wu, in press). The study on the process and outcomes of residential relocation from the perspective of urban redevelopment is inadequate. This paper is intended to complement previous studies and focus on these two issues. In particular, I will examine the actors involved in residential relocation process and their responses to maximize their benefits and the outcomes with respect to satisfaction, the changes in housing tenure, building forms and housing condition.