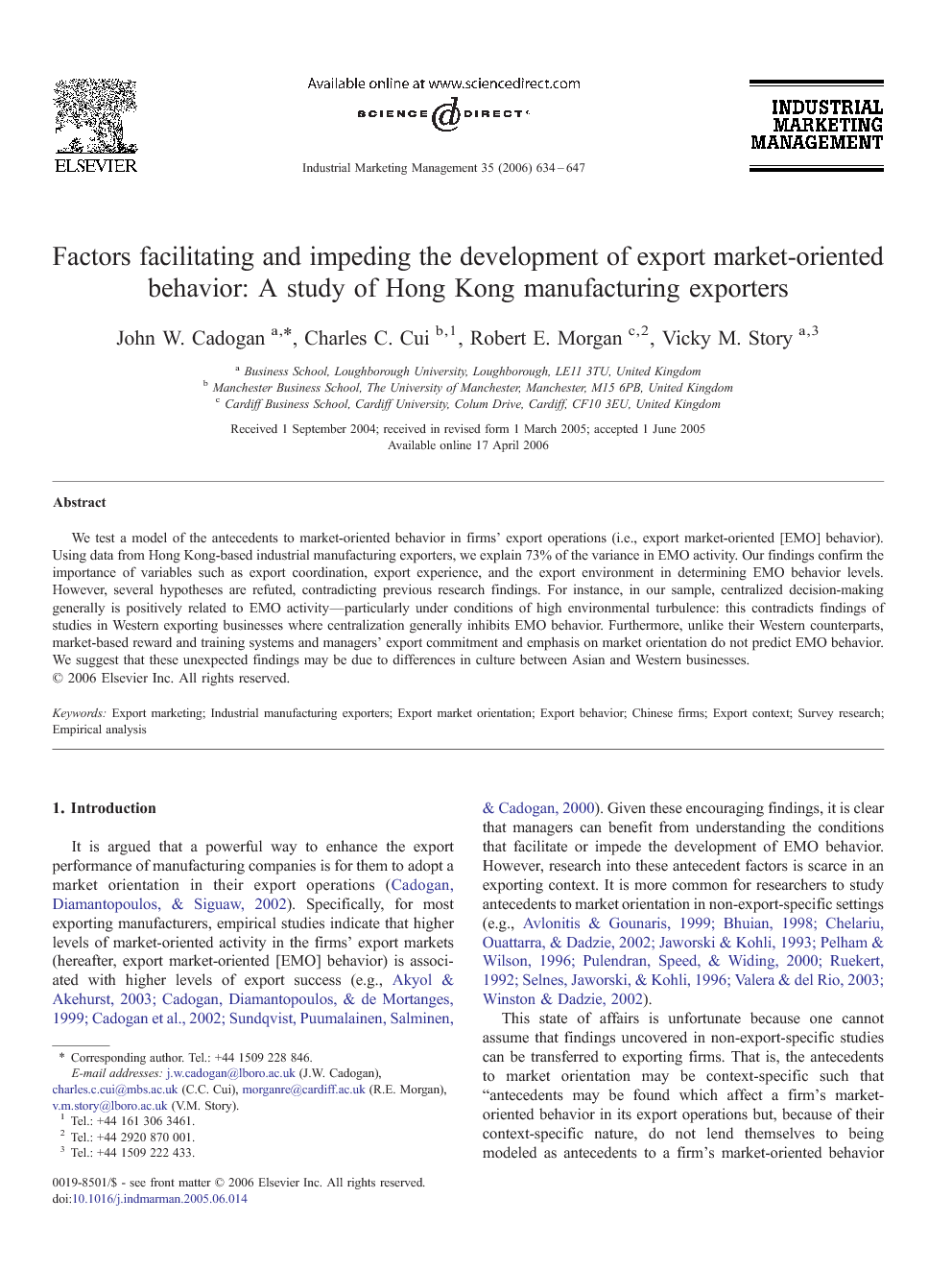 We test a model of the antecedents to market-oriented behavior in firms' export operations (i.e., export market-oriented [EMO] behavior). Using data from Hong Kong-based industrial manufacturing exporters, we explain 73% of the variance in EMO activity. Our findings confirm the importance of variables such as export coordination, export experience, and the export environment in determining EMO behavior levels. However, several hypotheses are refuted, contradicting previous research findings. For instance, in our sample, centralized decision-making generally is positively related to EMO activity—particularly under conditions of high environmental turbulence: this contradicts findings of studies in Western exporting businesses where centralization generally inhibits EMO behavior. Furthermore, unlike their Western counterparts, market-based reward and training systems and managers' export commitment and emphasis on market orientation do not predict EMO behavior. We suggest that these unexpected findings may be due to differences in culture between Asian and Western businesses.

It is argued that a powerful way to enhance the export performance of manufacturing companies is for them to adopt a market orientation in their export operations (Cadogan, Diamantopoulos, & Siguaw, 2002). Specifically, for most exporting manufacturers, empirical studies indicate that higher levels of market-oriented activity in the firms' export markets (hereafter, export market-oriented [EMO] behavior) is associated with higher levels of export success (e.g., Akyol & Akehurst, 2003, Cadogan et al., 1999, Cadogan et al., 2002 and Sundqvist et al., 2000). Given these encouraging findings, it is clear that managers can benefit from understanding the conditions that facilitate or impede the development of EMO behavior. However, research into these antecedent factors is scarce in an exporting context. It is more common for researchers to study antecedents to market orientation in non-export-specific settings (e.g., Avlonitis & Gounaris, 1999, Bhuian, 1998, Chelariu et al., 2002, Jaworski & Kohli, 1993, Pelham & Wilson, 1996, Pulendran et al., 2000, Ruekert, 1992, Selnes et al., 1996, Valera & del Rio, 2003 and Winston & Dadzie, 2002). This state of affairs is unfortunate because one cannot assume that findings uncovered in non-export-specific studies can be transferred to exporting firms. That is, the antecedents to market orientation may be context-specific such that “antecedents may be found which affect a firm's market-oriented behavior in its export operations but, because of their context-specific nature, do not lend themselves to being modeled as antecedents to a firm's market-oriented behavior in its domestic market” (Cadogan, Paul, Salminen, Puumalainen, & Sundqvist, 2001, p. 262). Thus, researchers interested in understanding antecedents to EMO behavior have to contend with the possibility that antecedent factors may not mirror or have the same affect as those identified in non-export-specific studies. Cadogan and colleagues' empirical findings add credence to this contention, since they discover antecedent factors to EMO behavior that are unique to the exporting context, and which have little meaning within non-export settings (see Cadogan et al., 2001 and Cadogan et al., 2002). A further problem arises from the scarcity of research into the antecedents to market-oriented behavior of exporters. Specifically, to the authors' knowledge, only two published studies attempt to identify factors facilitating or inhibiting EMO behavior: Cadogan et al.'s (2001) investigation of New Zealand and Finnish exporters, and Cadogan et al.'s (2002) study of US exporters. This paucity of empirical evidence means that export managers operating in non-Western business environments have only Western-based empirical evidence to help them develop strategies for managing EMO levels in their businesses. However, non-Western business cultures may be different from those found in Western firms, especially in terms of market-oriented activities (cf., Deshpandé & Farley, 2004), and generalizing studies of exporting behavior from Western to non-Western business contexts may be misleading (see Ling-yee, 2004). Indeed, it is noted that there is a need for more studies into the transferability of Western exporting research to the Asian business setting (Ambler, Styles, & Xiucun 1999). In this respect, Cadogan et al. (2001) argue that the antecedents to EMO behavior may be partially nation-specific, and present some empirical evidence in support of this notion. Given this situation, the purpose of the current study is to shed new light on the antecedents to EMO behavior on two fronts. First, responding to Ambler et al.'s (1999) call, our main contribution is to test the generalizability of previous models of antecedents to EMO behavior in an Asian business setting. To this end, we utilize a sample of Hong Kong-based industrial manufacturing exporters to provide initial insights into the research question. Our second contribution is to extend the previous models of EMO behavior's antecedents by adding to the hypotheses already developed. As a result, we add richness to our current understanding of how EMO behaviors come about, and how they can be fostered and managed. In what follows, we describe the domain of the EMO behavior construct, and then present our model of its antecedents. We then explain the methods used to test the model and describe our results. Finally, we discuss the findings of the study, highlight the managerial implications, and provide suggestions for future research.

Research into antecedents to EMO behavior uses samples of US, European and New Zealand exporters. Generalizing from these studies to export marketing contexts in other countries can be misleading (Katsikeas, Peircy, & Ioannidis, 1996), especially when considering export behaviors in non-Western business environments (Ling-yee, 2004) and industrial manufacturer samples in particular. For this reason, the purpose of this study is to investigate the factors facilitating and inhibiting EMO activity in a non-Western country. Using a sample of Hong Kong-based industrial manufacturing exporters, we successfully identify several key determinants of EMO activity, and therein explain a large percentage of variance (73%). Importantly, our findings indicate that concerns are justified over the generalizability of exporting theory generated and tested only in typically Western countries with limited account taken specifically of business-to-business contexts. Specifically, we uncover several instances where the theory of EMO behavior's antecedents does not hold for this type of Hong Kong exporter. Table 4 provides a comparison of the current study and Cadogan and colleagues' studies into EMO behavior in New Zealand, Finland and the USA. It can be seen that there are some important differences between the results reported by the latter studies and the findings we uncover in Hong Kong. For instance, in our Hong Kong firms, not only did centralization return a positive main effect, it also returned a positive interaction effect. The managerial implication of this is that some decentralization of decision-making may have a positive influence on EMO behavior in Hong Kong firms—but only when the export environment is stable. During condition of environmental turbulence, centralized decision-making is more effective. This finding can be explained by the norms of Chinese national culture whereby employees prefer and expect centralized decision-making within their organizations. However, in Europe or New Zealand, the intra-organizational social dynamics and expectations are markedly different. Cadogan et al. (2001) show that in these countries, centralization inhibits EMO behavior and suggest that decentralized decision-making is recommended under conditions of environmental turbulence. The danger of generalizing results from Western businesses to Asian firms is clear. More especially, this finding sheds light on the decision-making locus in industrial firms; wherein we find that the nature of these firms, and the characteristic complexity of their customer solutions, demands that a coherence be brought to bear in centralizing decision-making activities, irrespective of the degree to which the environment is turbulent. Furthermore, variables that are found to be critical in determining EMO behavior in Western exporters are not found to have the same influence in Hong Kong. Based on European and US studies, it is recommended that firms develop export market-oriented reward and training systems, and that managers demonstrate their commitment to exporting and emphasize the importance of EMO behavior in the firm's export operations. However, since these findings do not hold in Hong Kong, one cannot say with confidence that investing in new reward and training systems will positively influence EMO activity. Similarly, since managers' expressions of commitment to exporting and emphasis on being market-oriented in export markets were not associated with EMO activity, it is also not possible to say that in Hong Kong, simply possessing positive export-related attitudes is a necessary and sufficient condition to increase EMO activity in the firm. Once again, the distinctiveness of the industrial export manufacturer context implies that these factors also play a limited role due, in part, to the nature of their customer offering(s). This means that the EMO behaviors necessary in taking the product to the export market do not make demands of these intrinsic and extrinsic characteristics. There are, however, several findings that are consistent across the research studies. Crucially, export coordination, export experience and export environmental turbulence are all identified as having positive significant main effects on EMO activity. Although environmental turbulence is not directly managed by the firms, other variables can be. In particular, export experience can be acquired or developed organically (Cadogan et al., 2001), and coordination can be fostered through careful management of inter-functional interactions (see, e.g., Menon et al., 1997 and Morgan & Piercy, 1998). That said, our findings shed new light on the role of export coordination since we identify a significant interaction with the level of environmental turbulence. From a managerial perspective, this result indicates that the task facing Hong Kong industrial manufacturing exporters is to ensure that there are smooth relationships between the exporting unit and other business functions, particularly under conditions of environmental turbulence. Here, dysfunctional conflict and poor communication patterns between functional units is detrimental to the development of market-oriented export information flows and market-oriented export response behaviors.