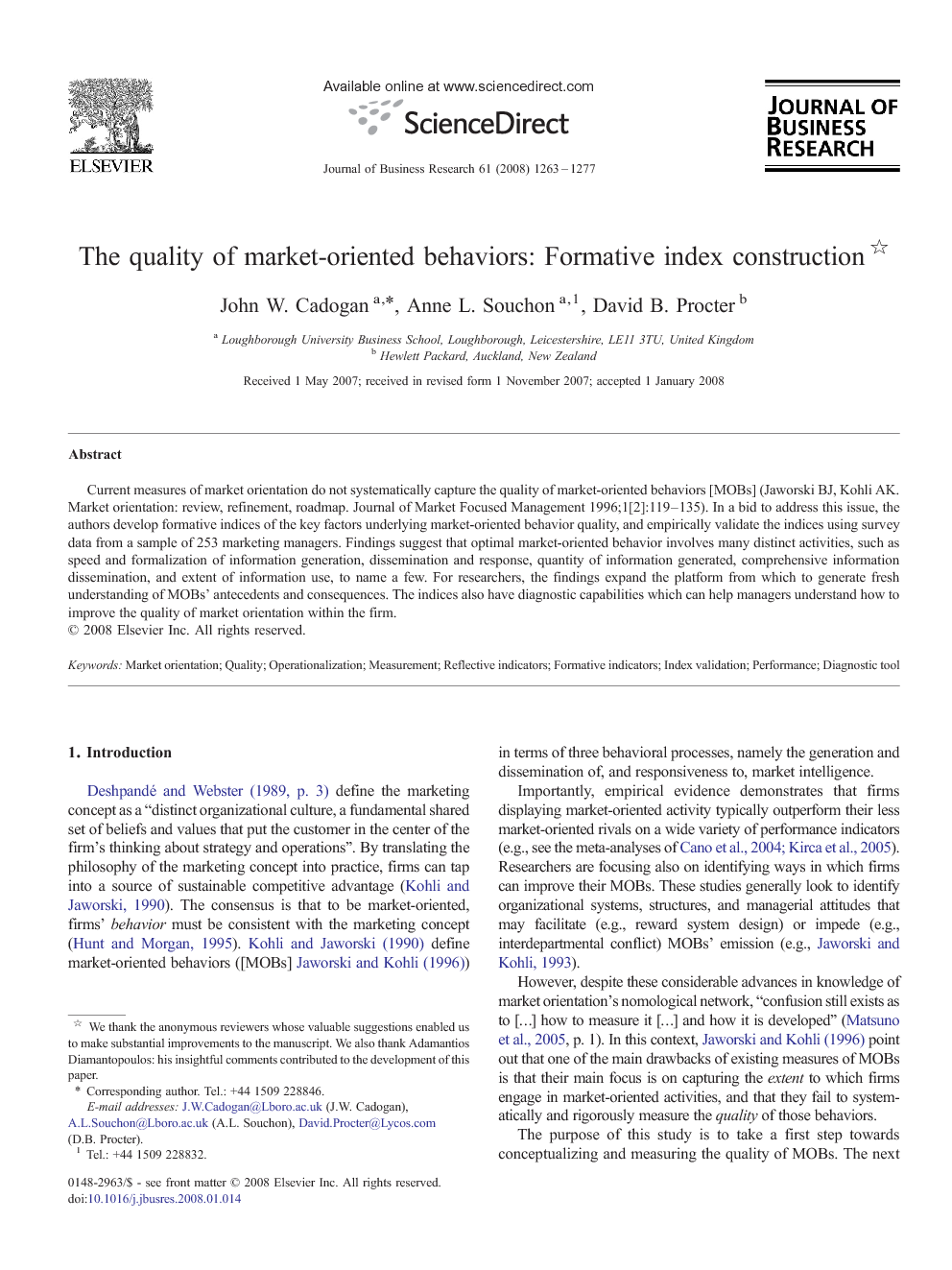 Current measures of market orientation do not systematically capture the quality of market-oriented behaviors [MOBs] (Jaworski BJ, Kohli AK. Market orientation: review, refinement, roadmap. Journal of Market Focused Management 1996;1[2]:119–135). In a bid to address this issue, the authors develop formative indices of the key factors underlying market-oriented behavior quality, and empirically validate the indices using survey data from a sample of 253 marketing managers. Findings suggest that optimal market-oriented behavior involves many distinct activities, such as speed and formalization of information generation, dissemination and response, quantity of information generated, comprehensive information dissemination, and extent of information use, to name a few. For researchers, the findings expand the platform from which to generate fresh understanding of MOBs' antecedents and consequences. The indices also have diagnostic capabilities which can help managers understand how to improve the quality of market orientation within the firm.

Deshpandé and Webster (1989, p. 3) define the marketing concept as a “distinct organizational culture, a fundamental shared set of beliefs and values that put the customer in the center of the firm's thinking about strategy and operations”. By translating the philosophy of the marketing concept into practice, firms can tap into a source of sustainable competitive advantage (Kohli and Jaworski, 1990). The consensus is that to be market-oriented, firms' behavior must be consistent with the marketing concept ( Hunt and Morgan, 1995). Kohli and Jaworski (1990) define market-oriented behaviors ([MOBs] Jaworski and Kohli (1996)) in terms of three behavioral processes, namely the generation and dissemination of, and responsiveness to, market intelligence. Importantly, empirical evidence demonstrates that firms displaying market-oriented activity typically outperform their less market-oriented rivals on a wide variety of performance indicators (e.g., see the meta-analyses of Cano et al., 2004 and Kirca et al., 2005). Researchers are focusing also on identifying ways in which firms can improve their MOBs. These studies generally look to identify organizational systems, structures, and managerial attitudes that may facilitate (e.g., reward system design) or impede (e.g., interdepartmental conflict) MOBs' emission (e.g., Jaworski and Kohli, 1993). However, despite these considerable advances in knowledge of market orientation's nomological network, “confusion still exists as to […] how to measure it […] and how it is developed” (Matsuno et al., 2005, p. 1). In this context, Jaworski and Kohli (1996) point out that one of the main drawbacks of existing measures of MOBs is that their main focus is on capturing the extent to which firms engage in market-oriented activities, and that they fail to systematically and rigorously measure the quality of those behaviors. The purpose of this study is to take a first step towards conceptualizing and measuring the quality of MOBs. The next section reflects on why it is that current market orientation measures do not adequately capture the quality of MOBs, and argues for a formative measurement approach. The authors then develop models featuring the key components forming the quality of, in turn, market intelligence generation, market intelligence dissemination and responsiveness to market intelligence. Finally, the authors report on an empirical study which validates the models.

The use of classical test theory to develop measures of MOBs results in measures that are unidimensional and lack diagnostic capability. The models in this paper use a formative measurement model, and are multidimensional. Correspondingly, the models may make strong diagnostic tools, since the variables forming MOB quality are identified. Managers should consider manipulating them to the firm's advantage. From a theoretical standpoint, this study provides new insights into market orientation's multidimensional nature. Some formative indicators of MOB quality may be independent (e.g., why should organization-wide generation of market information correlate highly and positively with the extent to which adequate quantities of information are generated)? An implication of this insight is that antecedent factors to the quality of MOBs may not be consistent across formative indicators. As a result, current theories of antecedents to MOBs will need re-calibrating to take into account this more fine-grained treatment. Each formative indicator will have its own nomological network, and each network may be complex. Extending this discussion, it is interesting to note that Jarvis et al. (2003, p. 210) explicitly model antecedents to formative latent variables at the latent variable-level, not the item-level. This observation is odd, given that a latent variable's formative indicators may have different antecedent factors, and those antecedents may not influence all indicators the same way. Furthermore, it seems illogical to assume that antecedents will act on, say, generation quality directly at the latent variable-level, bypassing the formative indicators, when the formative indicators define generation quality. Such a bypass would unreasonably imply that changes in antecedent conditions will change the latent variable, but not its formative indicators. Also, modeling antecedents at the latent variable-level has implications for the meaning of the error term: for instance, if generation quality's formative indicators describe it well (R2 = 100%) (see Jarvis et al., 2003, p. 210: Fig. 3, Model 2), then how could antecedents to generation quality directly contribute to variance explained? While this issue needs further research and clarification, one can argue that it is more appropriate to model antecedents to formative measures of MOB quality at the item-level, not at the latent variable-level. To shed light on the mechanisms by which MOBs shape business performance, the interrelationships between business success, generation, dissemination and responsiveness quality need investigation. For example, does decision-maker cognitive capability (i.e., ability to make ‘smart’ decisions), or does quality of the intelligence decision-makers receive moderate the relationship between responsiveness quality and performance? And what impact do generation and dissemination quality have on the quality of intelligence that decision-makers receive? The study also has limitations that future researchers must consider. First, the data are cross-sectional and cannot provide conclusive evidence on causality. Second, since there is no known method for statistically controlling method bias in models containing formative measures (Podsakoff et al., 2003), approaches for dealing with method biases under formative measurement need developing. Until then, “researchers must be even more careful than normal in designing their research because procedural controls are likely to be the most effective way to control common measurement biases” (Podsakoff et al., 2003, p. 900). Third, since there is no information on the stability of the study's findings, it requires replication and extension, perhaps using larger samples to increase power, a broader set of variables to assess nomological validity, and a comparison of the predictive power of the indices developed in the study with established measures of MOBs such as those of Narver and Slater (1990) and Jaworski and Kohli (1993). In this context, confirming the relative magnitude of the γs in the MIMIC models should be a priority: knowing which formative indicators contribute most to the quality of MOBs will help managers determine where to allocate scarce resources. Fourth, while the MIMIC model R2 values are satisfactory, each model's error component is substantial. There are two possible reasons why. (i) It is unlikely that the MIMIC models contain all formative indicators contributing to the quality of MOBs. Future research efforts should identify these unrepresented dimensions (e.g., creativity and improvisation in response behaviors). (ii) The choice of reflective items for the MIMIC models also determines R2s ( Diamantopoulos, 2006). Future researchers may wish to improve the performance of these items, either by changing wording, or by adding new items.