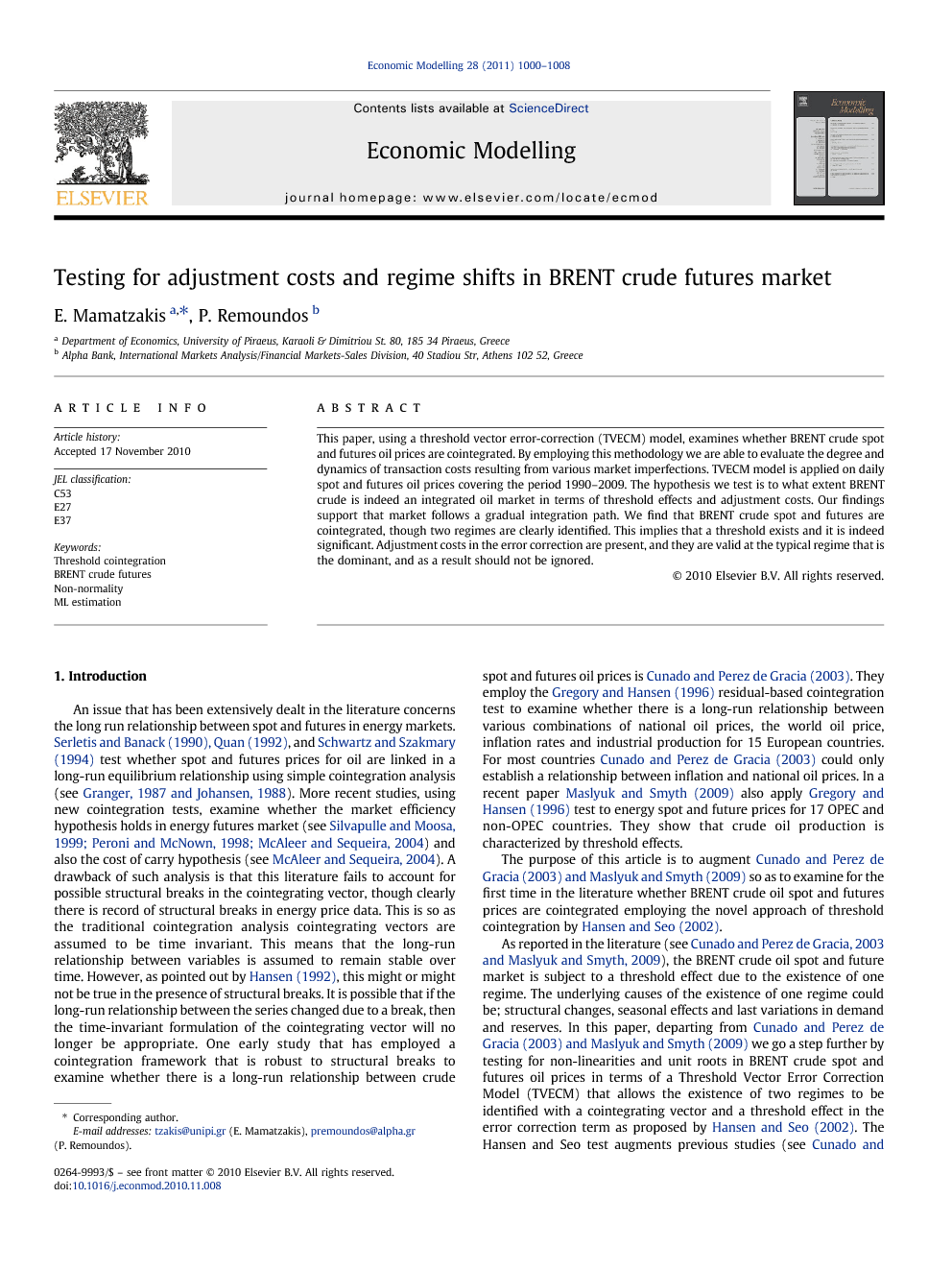 This paper, using a threshold vector error-correction (TVECM) model, examines whether BRENT crude spot and futures oil prices are cointegrated. By employing this methodology we are able to evaluate the degree and dynamics of transaction costs resulting from various market imperfections. TVECM model is applied on daily spot and futures oil prices covering the period 1990–2009. The hypothesis we test is to what extent BRENT crude is indeed an integrated oil market in terms of threshold effects and adjustment costs. Our findings support that market follows a gradual integration path. We find that BRENT crude spot and futures are cointegrated, though two regimes are clearly identified. This implies that a threshold exists and it is indeed significant. Adjustment costs in the error correction are present, and they are valid at the typical regime that is the dominant, and as a result should not be ignored.

An issue that has been extensively dealt in the literature concerns the long run relationship between spot and futures in energy markets. Serletis and Banack, 1990 and Quan, 1992, and Schwartz and Szakmary (1994) test whether spot and futures prices for oil are linked in a long-run equilibrium relationship using simple cointegration analysis (see Granger, 1987 and Johansen, 1988). More recent studies, using new cointegration tests, examine whether the market efficiency hypothesis holds in energy futures market (see Silvapulle and Moosa, 1999, Peroni and McNown, 1998 and McAleer and Sequeira, 2004) and also the cost of carry hypothesis (see McAleer and Sequeira, 2004). A drawback of such analysis is that this literature fails to account for possible structural breaks in the cointegrating vector, though clearly there is record of structural breaks in energy price data. This is so as the traditional cointegration analysis cointegrating vectors are assumed to be time invariant. This means that the long-run relationship between variables is assumed to remain stable over time. However, as pointed out by Hansen (1992), this might or might not be true in the presence of structural breaks. It is possible that if the long-run relationship between the series changed due to a break, then the time-invariant formulation of the cointegrating vector will no longer be appropriate. One early study that has employed a cointegration framework that is robust to structural breaks to examine whether there is a long-run relationship between crude spot and futures oil prices is Cunado and Perez de Gracia (2003). They employ the Gregory and Hansen (1996) residual-based cointegration test to examine whether there is a long-run relationship between various combinations of national oil prices, the world oil price, inflation rates and industrial production for 15 European countries. For most countries Cunado and Perez de Gracia (2003) could only establish a relationship between inflation and national oil prices. In a recent paper Maslyuk and Smyth (2009) also apply Gregory and Hansen (1996) test to energy spot and future prices for 17 OPEC and non-OPEC countries. They show that crude oil production is characterized by threshold effects. The purpose of this article is to augment Cunado and Perez de Gracia, 2003 and Maslyuk and Smyth, 2009 so as to examine for the first time in the literature whether BRENT crude oil spot and futures prices are cointegrated employing the novel approach of threshold cointegration by Hansen and Seo (2002). As reported in the literature (see Cunado and Perez de Gracia, 2003 and Maslyuk and Smyth, 2009), the BRENT crude oil spot and future market is subject to a threshold effect due to the existence of one regime. The underlying causes of the existence of one regime could be; structural changes, seasonal effects and last variations in demand and reserves. In this paper, departing from Cunado and Perez de Gracia, 2003 and Maslyuk and Smyth, 2009 we go a step further by testing for non-linearities and unit roots in BRENT crude spot and futures oil prices in terms of a Threshold Vector Error Correction Model (TVECM) that allows the existence of two regimes to be identified with a cointegrating vector and a threshold effect in the error correction term as proposed by Hansen and Seo (2002). The Hansen and Seo test augments previous studies (see Cunado and Perez de Gracia, 2003 and Maslyuk and Smyth, 2009) that opt for Gregory and Hansen's test as the latter limits the analysis of cointegration in the presence of a single regime shift.1 To this end our study departs from the existing literature (see for a review Maslyuk and Smyth, 2009) of traditional cointegration. By doing so, we are able to test whether there have been threshold effects in terms of different underlying regimes. A regime shift would be identified whether it occurs in the intercept, trend or the entire cointegration vector. Our analysis is based on monthly BRENT data from 1990 to 2009, which has well-developed spot and futures markets. Moreover, in the first step we use maximum likelihood estimation (MLE) of the threshold model. In the second step we test the presence of a threshold effect. Under the null hypothesis the model transforms to a linear VECM. Our findings are of interest as they allow accounting for the effects of expectations on the underlying relationship between oil futures and spot.2 Weak form efficiency in markets would imply that oil futures provide expectations about spot prices t′ periods ahead ( Chance, 1991). Along these lines Gulen (1998) argues that in case of cointegration oil future would be an unbiased predictor of spot. On the other hand, finding cointegration between oil futures and spot may not necessarily imply efficiency according to Hamilton, 2007, Narayan et al., 2008 and Maslyuk and Smyth, 2009. This is because the oil market could still be inefficient if market participants could take advantage of cointegration to earn risk adjusted excess returns. However, there is not much evidence to suggest that cointegration would lead to risk adjusted excess rates of return ( Sanders et al., 2008). 3 The rest of this article is structured as follows: Section 2 presents literature review and some stylized facts regarding the BRENT crude oil market. Section 3 presents the theoretical specification of the threshold vector error correction model for the BRENT crude oil market while Section 4 reports unit root tests, including potential structural breaks, the threshold cointegration analysis, whilst Section 5 offers some conclusions.

The hypothesis we test is to what extent BRENT crude spot and futures are indeed integrated, insinuating a more efficient and integrated oil market. However, we depart from the literature (Maslyuk and Smyth, 2009) as we opt for a threshold vector errorcorrection (TVECM) model that allows identifying different regimes, threshold parameters and thus adjustment costs. Note that the larger the size of the threshold, the greater is the persistence of disequilibrium, implying lower degree of integration in the BRENT crude oil market. In turn, a low degree of integration implies absence of market efficiency. In terms of the present analysis, a large threshold effect would imply that the BRENT crude oil market is inefficient and thusmarket participants could earn abnormal returns.As a result one would interpret the size of the threshold parameter as a measure of integration, and thus market efficiency, in the BRENT crude oil market. Ourfindings support the gradual integrationhypothesis.Moreover,we find that BRENT crude spot and future of one, two and three month prices are cointegrated and two regimes are identified. This implies that a threshold exists and it is indeed significant. Thus, adjustment costs in the error correction are present, and they are valid at the typical regime one that is the dominant, and as a result should not be ignored. Moreover, most results show persistent disequilibrium, describing the case when BRENT crude oil futures are priced much above spot, that is the first regime. In the literature this phenomenon of misalignment between future and spot price is often referred to as backwardation (Litzenberger and Rabinowitz, 1995). The present results showthat the BRENT crude oil spot and future market may not be characterized by production constraints. In terms of policy implications, this would imply that production of BRENT crude oil is non-increasing in the riskiness of future prices.