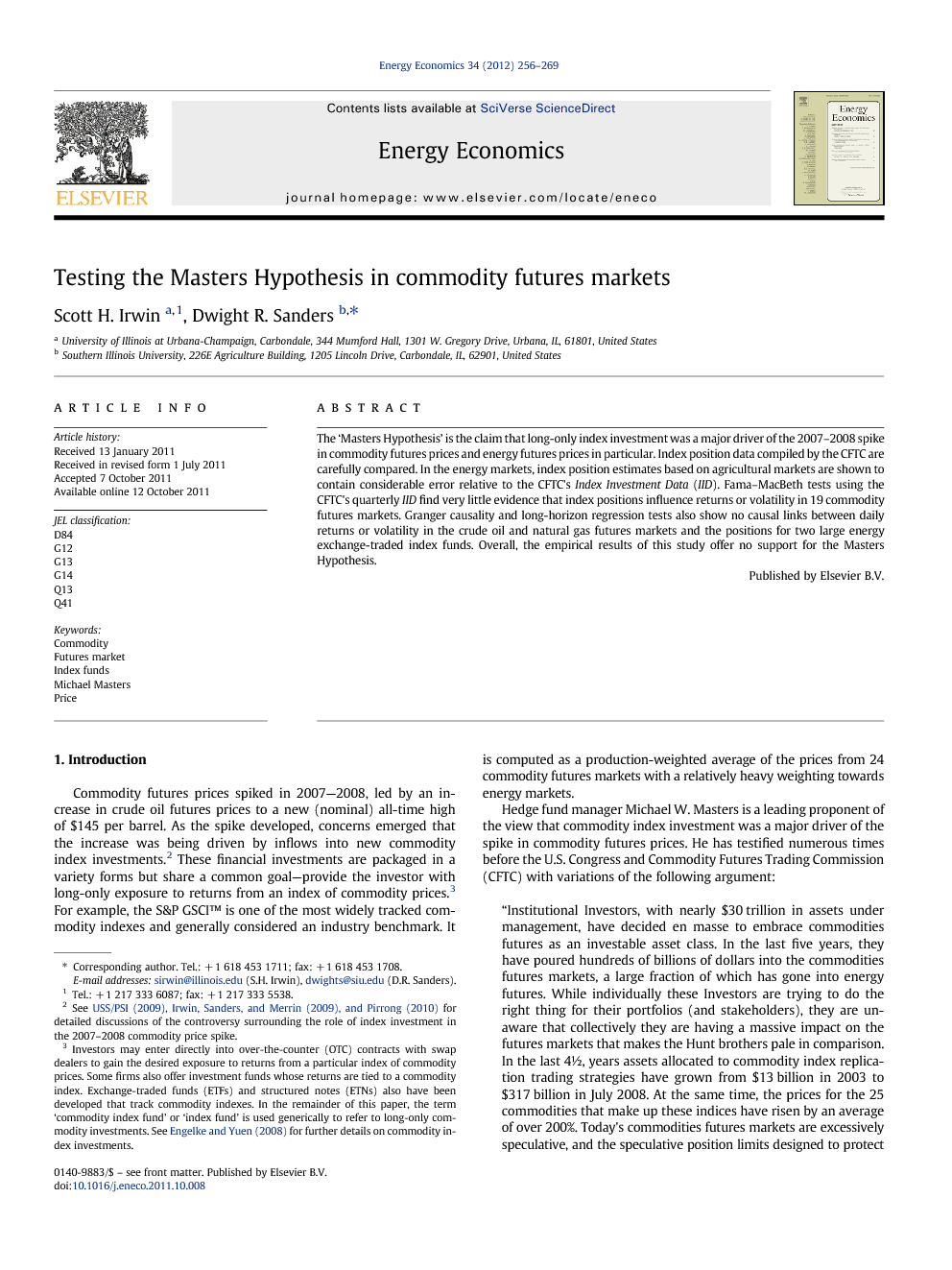 The ‘Masters Hypothesis’ is the claim that long-only index investment was a major driver of the 2007–2008 spike in commodity futures prices and energy futures prices in particular. Index position data compiled by the CFTC are carefully compared. In the energy markets, index position estimates based on agricultural markets are shown to contain considerable error relative to the CFTC's Index Investment Data (IID). Fama–MacBeth tests using the CFTC's quarterly IID find very little evidence that index positions influence returns or volatility in 19 commodity futures markets. Granger causality and long-horizon regression tests also show no causal links between daily returns or volatility in the crude oil and natural gas futures markets and the positions for two large energy exchange-traded index funds. Overall, the empirical results of this study offer no support for the Masters Hypothesis.

Hedge fund manager Michael W. Masters is a leading proponent of the view that commodity index investment was a major driver of the 2007–2008 spike in commodity prices. In essence, Masters argues that massive buy-side pressure from index funds created a bubble in commodity prices, with the result that prices, and crude oil prices, in particular, far exceeded fundamental values at the peak. Empirical tests of the Masters Hypothesis in commodity futures markets require data that match the basic tenets of the hypothesis. In particular, swap dealer netting of index positions with other over-the-counter (OTC) transactions result in futures positions—as reported in the U.S. Commodity Futures Trading Commission's (CFTC) Commitment of Traders (COT) reports—that may not accurately reflect the total effective ‘demand’ of index investors. The netting effect is most severe in energy futures markets which are at the heart of the current public policy debate about speculative impacts. The best measure of actual commodity index investment is found in the CFTC's quarterly Index Investment Data (IID) report, which is collected independently of the CFTC's large trader reporting system. The IID data show that the statistical relationships between index positions in different markets can be weak. Most pointedly, the net long IID position in crude oil is negatively correlated with those of agricultural commodities from 2007 to 2011. WTI crude oil futures positions created using the Masters (2008) algorithm do not correspond closely with those reported in the IID. The average absolute error is 52% and the correlation is near zero at the quarterly horizon. Empirical studies that use the Masters algorithm (Singleton, 2011) or other mapping methods (Gilbert, 2009) to generate index positions in WTI crude oil futures are likely seriously flawed as a result. The IID appear to be the only reliable measure of index investments in the energy and metals futures markets. Cross-sectional Fama–MacBeth regression tests using the IID find very little evidence that index positions influence returns or volatility in 19 commodity futures markets. The results are robust to whether lagged or contemporaneous effects are considered and the addition of the nearby-deferred futures spread as a conditioning variable. The findings are the strongest evidence against the Masters Hypothesis to date because: i) IID growth rates are the best available measurement of the increase in the total effective ‘demand’ of index investors; and ii) the Fama–MacBeth test has good power properties for the sample sizes considered in this study (Ibragimov and Muller, 2010a,b). The cross-sectional tests are supplemented with time-series tests based on extensive samples of daily position data for two large energy ETFs—the U.S. Oil Fund and the U.S. Natural Gas Fund. In order to address power concerns, both Granger causality and long-horizon regression tests (Valkanov, 2003) are applied to the daily time-series of ETF positions. Granger-causality tests show no causal links between daily returns or volatility in crude oil and natural gas futures markets and the positions of the ETFs. Long-horizon regression tests likewise fail to reject the null hypothesis of no market impact for the two ETFs. The failure of the empirical results to support the Masters Hypothesis has important implications for the pricing performance of commodity futures markets. It implies that the markets were sufficiently liquid to absorb the large order flow of index funds in recent years, at least over daily or longer time horizons. Traders in commodity futures markets also did not confuse index fund position changes with signals about market fundamentals; rather, they reacted rationally to the market activity of index funds. The evidence strongly suggests that index funds—while a sizable participant—did not in fact harm price discovery in commodity futures markets. From this vantage point, recent regulatory plans to impose speculative position limits on index fund investors in all U.S. commodity futures markets appear to be ill-conceived.