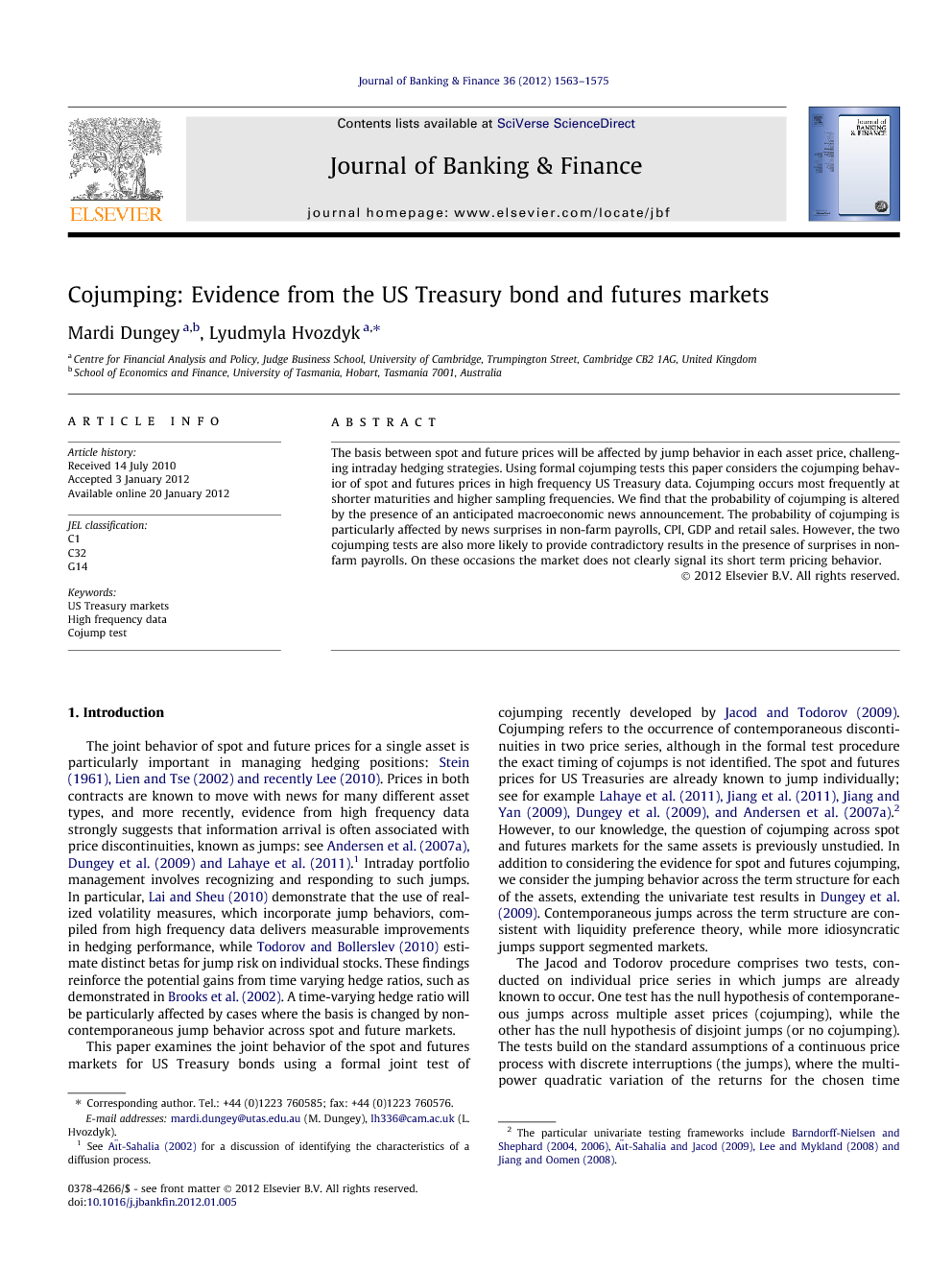 The basis between spot and future prices will be affected by jump behavior in each asset price, challenging intraday hedging strategies. Using formal cojumping tests this paper considers the cojumping behavior of spot and futures prices in high frequency US Treasury data. Cojumping occurs most frequently at shorter maturities and higher sampling frequencies. We find that the probability of cojumping is altered by the presence of an anticipated macroeconomic news announcement. The probability of cojumping is particularly affected by news surprises in non-farm payrolls, CPI, GDP and retail sales. However, the two cojumping tests are also more likely to provide contradictory results in the presence of surprises in non-farm payrolls. On these occasions the market does not clearly signal its short term pricing behavior.

The joint behavior of spot and future prices for a single asset is particularly important in managing hedging positions: Stein, 1961, Lien and Tse, 2002 and Lee, 2010. Prices in both contracts are known to move with news for many different asset types, and more recently, evidence from high frequency data strongly suggests that information arrival is often associated with price discontinuities, known as jumps: see Andersen et al., 2007a, Dungey et al., 2009 and Lahaye et al., 2011.1 Intraday portfolio management involves recognizing and responding to such jumps. In particular, Lai and Sheu (2010) demonstrate that the use of realized volatility measures, which incorporate jump behaviors, compiled from high frequency data delivers measurable improvements in hedging performance, while Todorov and Bollerslev (2010) estimate distinct betas for jump risk on individual stocks. These findings reinforce the potential gains from time varying hedge ratios, such as demonstrated in Brooks et al. (2002). A time-varying hedge ratio will be particularly affected by cases where the basis is changed by non-contemporaneous jump behavior across spot and future markets. This paper examines the joint behavior of the spot and futures markets for US Treasury bonds using a formal joint test of cojumping recently developed by Jacod and Todorov (2009). Cojumping refers to the occurrence of contemporaneous discontinuities in two price series, although in the formal test procedure the exact timing of cojumps is not identified. The spot and futures prices for US Treasuries are already known to jump individually; see for example Lahaye et al., 2011, Jiang et al., 2011, Jiang and Yan, 2009, Dungey et al., 2009 and Andersen et al., 2007a.2 However, to our knowledge, the question of cojumping across spot and futures markets for the same assets is previously unstudied. In addition to considering the evidence for spot and futures cojumping, we consider the jumping behavior across the term structure for each of the assets, extending the univariate test results in Dungey et al. (2009). Contemporaneous jumps across the term structure are consistent with liquidity preference theory, while more idiosyncratic jumps support segmented markets. The Jacod and Todorov procedure comprises two tests, conducted on individual price series in which jumps are already known to occur. One test has the null hypothesis of contemporaneous jumps across multiple asset prices (cojumping), while the other has the null hypothesis of disjoint jumps (or no cojumping). The tests build on the standard assumptions of a continuous price process with discrete interruptions (the jumps), where the multipower quadratic variation of the returns for the chosen time period, usually one day, can be consistently estimated by realized variance. Jacod and Todorov recognize that under the null of common jumps the ratio of realized variances at different sampling frequencies will be the same, so that the hypothesis can be rejected when this is not the case. Alternatively, in the case of a null of disjoint jumps, the ratio of the realized variance to the square root of product of the quadratic returns of the individual asset returns tends to zero (that is there is no evidence that the movements occur together). We confirm the small sample properties of the Jacod and Todorov tests for highly correlated series with different trading intensities. High frequency US Treasury spot prices are drawn from eSpeed, one of the two dominant ECNs trading these assets in the post-2000 era. Earlier work, such as Mizrach and Neely (2008) use data from the now superseded GovPX platform, which operated a voice over protocol. Corresponding data for the futures sample are obtained from the Chicago Mercantile Exchange, suitably transformed for nearest contract. Working with 2, 5, 10 and 30 year maturity contracts we find evidence of cojumping between spot and futures prices, and that cojumping often occurs in response to the surprise component of scheduled US macroeconomic news announcements. There are more jumps in the futures contracts than the spot contracts, however, there are also periods when the spot market jumps but the futures market does not. Given that the cojumping test proposed by Jacod and Todorov (2009) have two components, we find some periods where these tests are in conflict, so that one test suggests a cojump in the two assets and the other rejects its presence – that is one test suggests that jumps detected in each series occur contemporaneously on a given day, but the other test suggests they are separated in time. The extent of this is far greater than anticipated. Simple tabulations suggest that the conflicting results in the spot and futures pairs occur predominantly in the presence of negative surprises for US non-farm payrolls data. Formal regression analysis confirms the probability of a jump is influenced by macroeconomic news arrival, a result found in previous papers, but also the probability of observing an contradictory result. In these contradictory instances the hedging signals are unclear, as the tests are unable to reveal whether the basis has changed due to a jump in one asset, implying a potential arbitrage opportunity in the other asset, or due to different sized contemporaneous jumps in both assets. In particular, the tests cannot distinguish whether the data are subject to contemporaneous price discontinuities in the two markets, or whether the price discontinuities are separated in time. This likely reflects uncertainty around the news announcement, leading to moves which are inconsistent with the underlying continuous data generating process as the market attempts to establish a new equilibrium. For an intraday speculator or portfolio manager, it is potentially important to recognize that these periods of confusion, and hence opportunity, occur primarily in association with news releases, and particularly in response to the release of surprises in non-farm payrolls data. The paper is organized as follows. Section 2 presents formal jump test methodologies. The data are described in Section 3 and the results of the cojumping tests are discussed in Section 4. In Section 5 the small sample properties of the jumps test are examined in a Monte Carlo with correlated prices. The relationships between cojumping and news, and contradictory test result occurrences and news are analyzed in Section 6. Finally, Section 7 concludes.

The presence of price discontinuities in high frequency financial market data is well documented in the univariate case. However, many interesting questions concern the presence of contemporaneous price disruptions across multiple assets. In a hedging framework an obvious question is the extent to which spot and future prices exhibit such behavior. Recently, Jacod and Todorov (2009) have developed a bivariate test for contemporaneous within-day jumps across two series using a pair of tests – one of which has a null of cojumping and one of which the null of disjoint jumps, although the time of day is not identified. The small sample properties of the Jacod and Todorov tests were confirmed under the conditions of highly correlated series of different intensities present in this data. This paper considers the cojumping behavior of spot and future contracts for US Treasury contracts in maturity pairs, and across the term structure. The bivariate tests indicate that the detection of cojumping is increasing with sampling frequency. The test with the null of cojumping finds a monotonic relationship between cojumping and maturity structure – more cojumps are detected for lower maturity contracts in both futures and spot contracts for maturity pairs, or within the same market across the term structure. The probability of cojumping behavior increases in the presence of prescheduled macroeconomic news events. However, the probability that the statistical tests are unable to distinguish whether price discontinuities in two assets are occurring contemporaneously or at distinct times within the day also increases in the presence of prescheduled news. In particular, the probability that the tests disagree increases in the presence of surprises in non-farm payrolls; that is there is more confusion evident in the data in these cases. Overall, these results indicate the importance of non-farm payrolls releases to active portfolio management and speculative opportunities. A useful extension of this work will be to develop new cojumping statistics which are able to specify the timing of the jump events, particularly to reveal if price discontinuities on the news release days have discernible regularities. In particular, this will allow further exploration of the nature of the price impact of news arrival, such as whether the news surprise flows from futures to spot markets; see for example, Rosenberg and Traub (2006), Mizrach and Neely (2008) and Chen and Gau (2010).9 This is scope for future work.