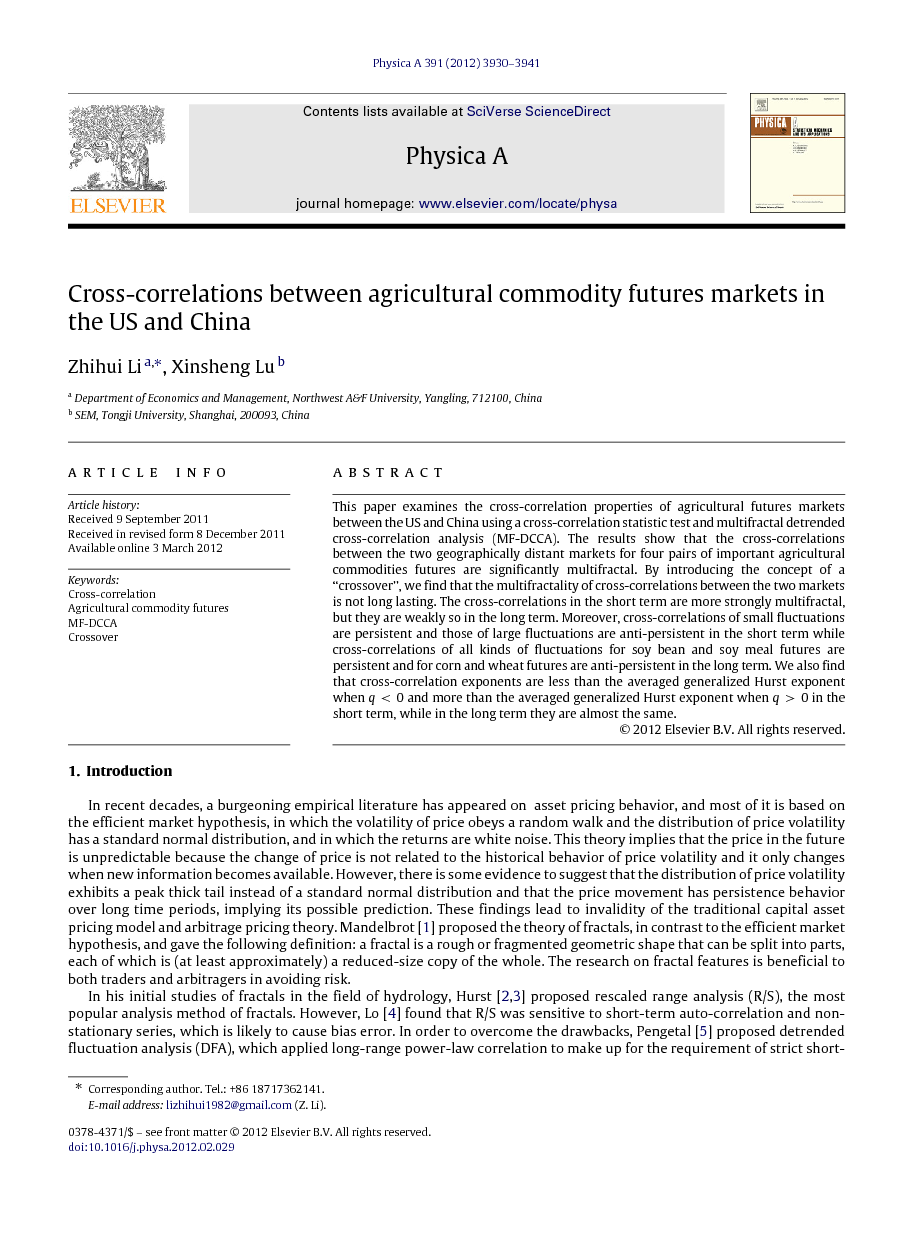 In recent decades, a burgeoning empirical literature has appeared on asset pricing behavior, and most of it is based on the efficient market hypothesis, in which the volatility of price obeys a random walk and the distribution of price volatility has a standard normal distribution, and in which the returns are white noise. This theory implies that the price in the future is unpredictable because the change of price is not related to the historical behavior of price volatility and it only changes when new information becomes available. However, there is some evidence to suggest that the distribution of price volatility exhibits a peak thick tail instead of a standard normal distribution and that the price movement has persistence behavior over long time periods, implying its possible prediction. These findings lead to invalidity of the traditional capital asset pricing model and arbitrage pricing theory. Mandelbrot [1] proposed the theory of fractals, in contrast to the efficient market hypothesis, and gave the following definition: a fractal is a rough or fragmented geometric shape that can be split into parts, each of which is (at least approximately) a reduced-size copy of the whole. The research on fractal features is beneficial to both traders and arbitragers in avoiding risk. In his initial studies of fractals in the field of hydrology, Hurst [2] and [3] proposed rescaled range analysis (R/S), the most popular analysis method of fractals. However, Lo [4] found that R/S was sensitive to short-term auto-correlation and non-stationary series, which is likely to cause bias error. In order to overcome the drawbacks, Pengetal [5] proposed detrended fluctuation analysis (DFA), which applied long-range power-law correlation to make up for the requirement of strict short-range correlation in time series for R/S. With multifractal (MF) generalization, DFA and MF-DFA [6] are widely used to describe the fractal properties. Many scholars have studied multifractal properties in the crude oil market [7], [8] and [9], stock market [10] and [11], international exchange rate market [12], and gold market [13]. Recently, [14] extended DFA to investigate the long-range cross-correlations between two nonstationary time series. This method is named detrended cross-correlation analysis (DCCA), and it has been widely tested in previous works [15] and [16]. Subsequently, Zhou [17] proposed multifractal detrended cross-correlation analysis (MF-DCCA) by combining MF-DFA and DCCA approaches. The DCCA method and MF-DCCA have been used to detect the cross-correlations between two financial series in some papers; see, for example, [18]. Literature on autocorrelation and cross-correlation in agricultural futures markets is rare, and most of it relates to North American contracts. For the US contracts, Corazza et al. [19] found the existence of long-range dependence in price returns of corn, oats, soybeans, soybean meal, and soybean oil futures by means of R/S analysis. Chatrath et al. [20] also found low-dimensional chaotic structures for four respective futures using the correlation dimension, the BDS statistic, and the Kolmogorov entropy. In addition, Power and Turvey [21] provided widespread evidence of long-range dependence for 14 commodities, including corn, soy bean, and wheat futures. Several articles focus on agricultural futures markets in developing countries. He and Chen [22] and [23] examined returns data on the corn, hard winter wheat, soy bean, and soy meal futures in the US and Chinese agricultural futures markets, and found multifractal properties. After Podobnik et al. [24] first analyzed the power-law cross-correlations between price changes and volume changes in absolute values, He and Chen [25] also examined the multifractality of cross-correlations between price and volume changes in agricultural futures contracts in Chinese and US markets. Similarly, Erinaldo et al. [26] found that multifractality and cross-correlations exist in Brazilian agricultural commodities and stocks. However, little detailed empirical evidence is found in the current literature in regard to the cross-correlations between the emerging markets and mature markets. This paper aims to investigate the cross-correlations between the US and Chinese agricultural markets for corn, soy bean, soy meal, and wheat futures by means of multifractal detrended cross-correlation analysis (MF-DCCA). The estimated cross-correlation exponents deviate from 0.5 and the cross-correlation between the two markets for the four kinds of futures is multifractal. A “crossover” is introduced to distinguish features of the long term and the short term, and the test results suggest that multifractal features in the short term are completely different from those in the long term. This article is organized as follows. Section 2 presents the MF-DCCA procedure. Section 3 describes the data for four representative agricultural future prices. Section 4 provides qualitative and quantitative analysis on the cross-correlation between the US and Chinese agricultural futures markets by means of MF-DCCA. Section 5 gives our conclusions.