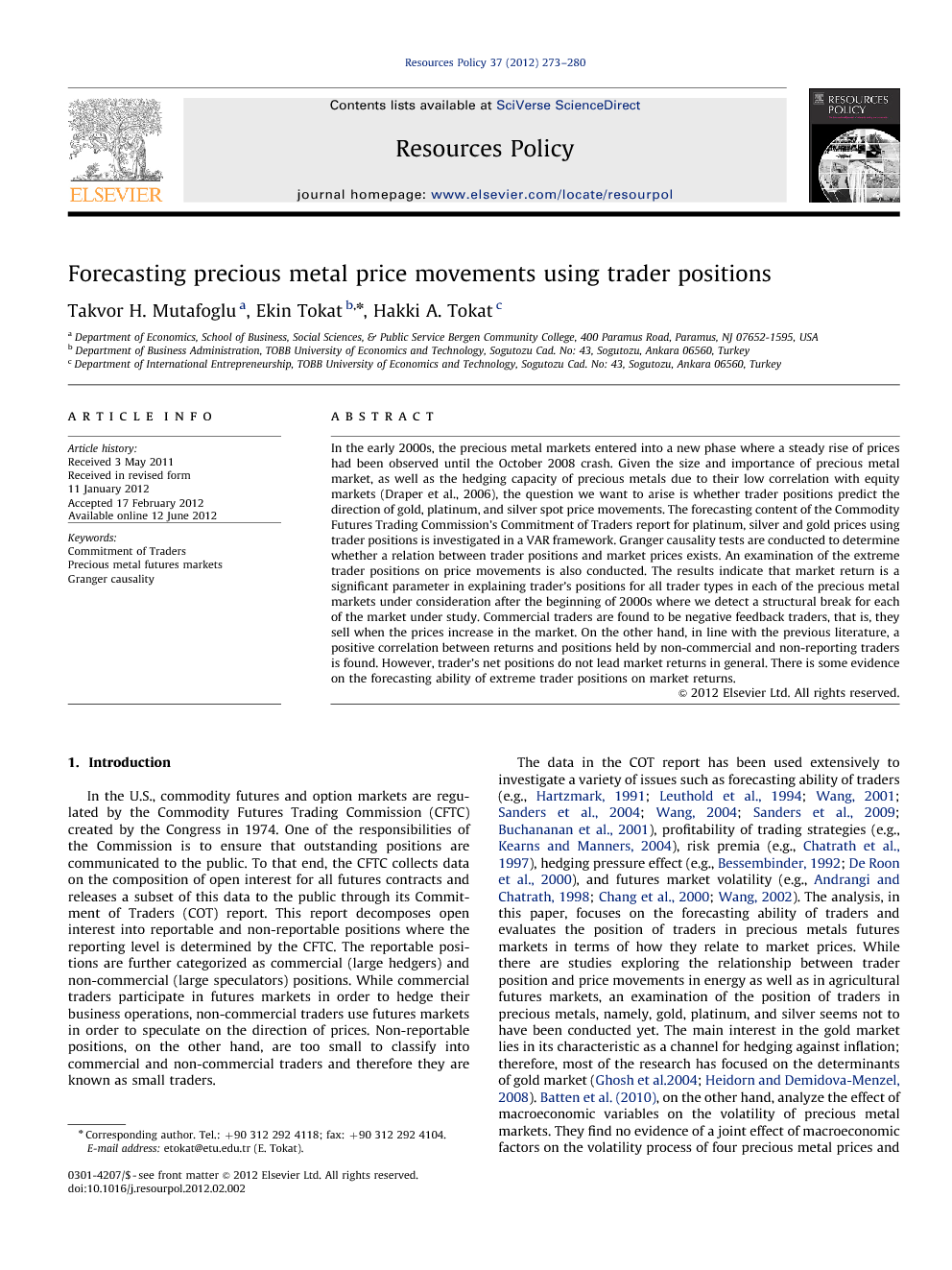 In the early 2000s, the precious metal markets entered into a new phase where a steady rise of prices had been observed until the October 2008 crash. Given the size and importance of precious metal market, as well as the hedging capacity of precious metals due to their low correlation with equity markets (Draper et al., 2006), the question we want to arise is whether trader positions predict the direction of gold, platinum, and silver spot price movements. The forecasting content of the Commodity Futures Trading Commission’s Commitment of Traders report for platinum, silver and gold prices using trader positions is investigated in a VAR framework. Granger causality tests are conducted to determine whether a relation between trader positions and market prices exists. An examination of the extreme trader positions on price movements is also conducted. The results indicate that market return is a significant parameter in explaining trader’s positions for all trader types in each of the precious metal markets under consideration after the beginning of 2000s where we detect a structural break for each of the market under study. Commercial traders are found to be negative feedback traders, that is, they sell when the prices increase in the market. On the other hand, in line with the previous literature, a positive correlation between returns and positions held by non-commercial and non-reporting traders is found. However, trader’s net positions do not lead market returns in general. There is some evidence on the forecasting ability of extreme trader positions on market returns.

In the U.S., commodity futures and option markets are regulated by the Commodity Futures Trading Commission (CFTC) created by the Congress in 1974. One of the responsibilities of the Commission is to ensure that outstanding positions are communicated to the public. To that end, the CFTC collects data on the composition of open interest for all futures contracts and releases a subset of this data to the public through its Commitment of Traders (COT) report. This report decomposes open interest into reportable and non-reportable positions where the reporting level is determined by the CFTC. The reportable positions are further categorized as commercial (large hedgers) and non-commercial (large speculators) positions. While commercial traders participate in futures markets in order to hedge their business operations, non-commercial traders use futures markets in order to speculate on the direction of prices. Non-reportable positions, on the other hand, are too small to classify into commercial and non-commercial traders and therefore they are known as small traders. The data in the COT report has been used extensively to investigate a variety of issues such as forecasting ability of traders (e.g., Hartzmark, 1991, Leuthold et al., 1994, Wang, 2001, Sander et al., 2004, Wang, 2004, Sanders et al., 2009 and Buchananan et al., 2001), profitability of trading strategies (e.g., Kearns and Manners, 2004), risk premia (e.g., Chatrath et al., 1997), hedging pressure effect (e.g., Bessembinder, 1992 and De Roon et al., 2000), and futures market volatility (e.g., Andragi and Chatrath, 1998, Chang et al., 2000 and Wang, 2002). The analysis, in this paper, focuses on the forecasting ability of traders and evaluates the position of traders in precious metals futures markets in terms of how they relate to market prices. While there are studies exploring the relationship between trader position and price movements in energy as well as in agricultural futures markets, an examination of the position of traders in precious metals, namely, gold, platinum, and silver seems not to have been conducted yet. The main interest in the gold market lies in its characteristic as a channel for hedging against inflation; therefore, most of the research has focused on the determinants of gold market (Ghosh et al., 2004 and Heidorn and Demidova-Menzel, 2008). Batten et al. (2010), on the other hand, analyze the effect of macroeconomic variables on the volatility of precious metal markets. They find no evidence of a joint effect of macroeconomic factors on the volatility process of four precious metal prices and conclude that precious metals cannot be represented as a single index. Given the size and importance of the gold market, as well as the hedging capacity of precious metals due to their low correlation with equity market (Hillier et al., 2006) it is important to address the question of whether trader positions predict the direction of gold, platinum, and silver spot price movements. Fig. 1 shows the continuous upward trend in precious metal markets since the early 2000s up until the October 2008 crash. This picture makes it worth to examine such an admired and highly speculative market segment for the investors. Although the relationship between trader positions and market prices are studied for various markets, ours is an attempt to see whether traders in precious metal markets behave differently than traders in other markets and therefore drive the precious metal prices or not. Full-size image (13 K) Fig. 1. Bloomberg precious metals spot price commodity index. Note: The figure shows the Bloomberg Precious Metals Spot Price Commodity Index over the period of January 1996 to December 2008. Figure options The organization of the paper is as follows. In the next section, we present several studies which make use of the COT data in their analysis. A detailed examination of the Commitment of Traders report and the data is provided in Section 3. The methodology and the empirical results are presented in Section 4. Finally, Section 5 provides a summary of the research and conclusions.