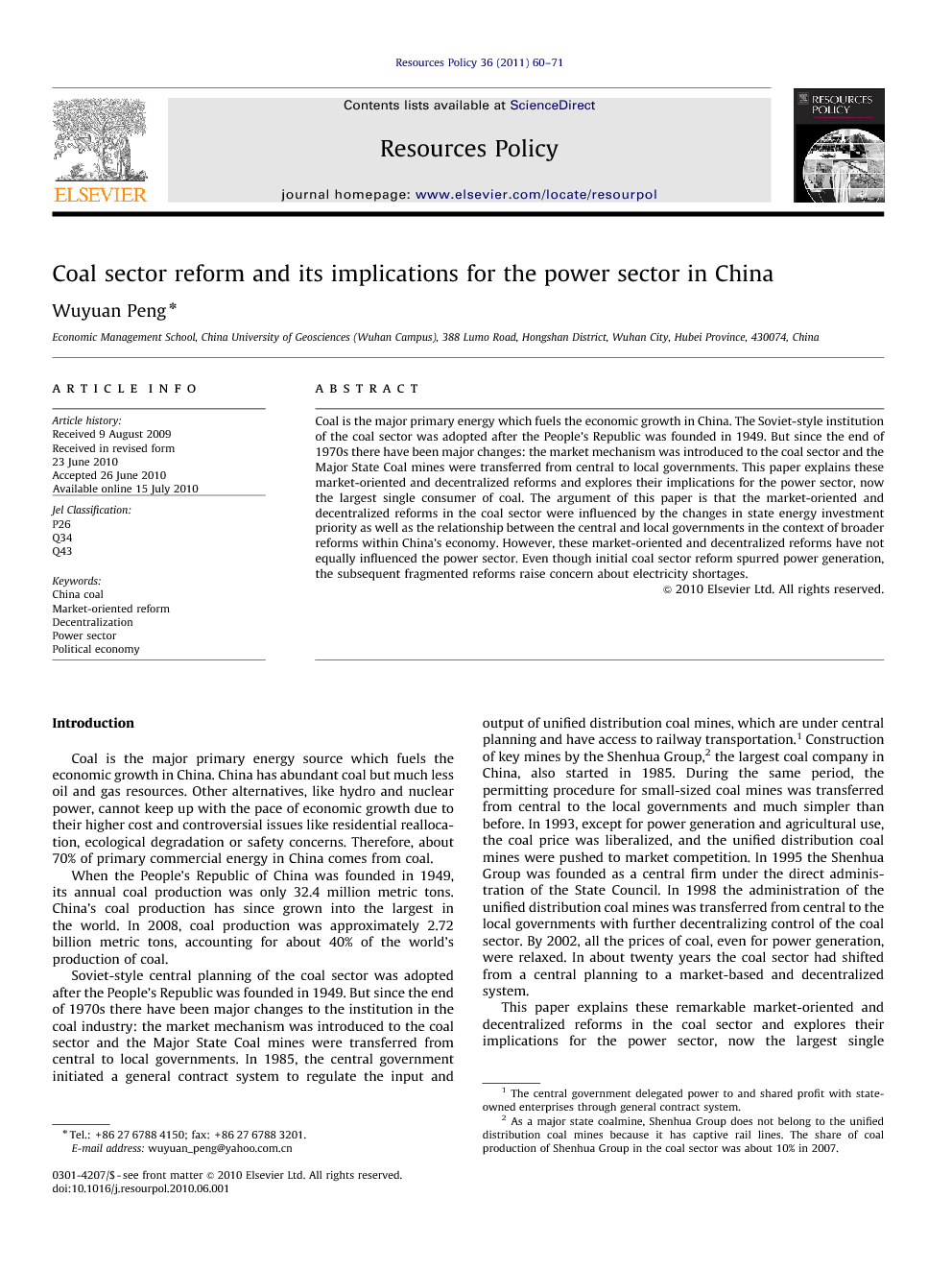 Coal is the major primary energy which fuels the economic growth in China. The Soviet-style institution of the coal sector was adopted after the People’s Republic was founded in 1949. But since the end of 1970s there have been major changes: the market mechanism was introduced to the coal sector and the Major State Coal mines were transferred from central to local governments. This paper explains these market-oriented and decentralized reforms and explores their implications for the power sector, now the largest single consumer of coal. The argument of this paper is that the market-oriented and decentralized reforms in the coal sector were influenced by the changes in state energy investment priority as well as the relationship between the central and local governments in the context of broader reforms within China’s economy. However, these market-oriented and decentralized reforms have not equally influenced the power sector. Even though initial coal sector reform spurred power generation, the subsequent fragmented reforms raise concern about electricity shortages.

Coal is the major primary energy source which fuels the economic growth in China. China has abundant coal but much less oil and gas resources. Other alternatives, like hydro and nuclear power, cannot keep up with the pace of economic growth due to their higher cost and controversial issues like residential reallocation, ecological degradation or safety concerns. Therefore, about 70% of primary commercial energy in China comes from coal. When the People’s Republic of China was founded in 1949, its annual coal production was only 32.4 million metric tons. China’s coal production has since grown into the largest in the world. In 2008, coal production was approximately 2.72 billion metric tons, accounting for about 40% of the world’s production of coal. Soviet-style central planning of the coal sector was adopted after the People’s Republic was founded in 1949. But since the end of 1970s there have been major changes to the institution in the coal industry: the market mechanism was introduced to the coal sector and the Major State Coal mines were transferred from central to local governments. In 1985, the central government initiated a general contract system to regulate the input and output of unified distribution coal mines, which are under central planning and have access to railway transportation.1 Construction of key mines by the Shenhua Group,2 the largest coal company in China, also started in 1985. During the same period, the permitting procedure for small-sized coal mines was transferred from central to the local governments and much simpler than before. In 1993, except for power generation and agricultural use, the coal price was liberalized, and the unified distribution coal mines were pushed to market competition. In 1995 the Shenhua Group was founded as a central firm under the direct administration of the State Council. In 1998 the administration of the unified distribution coal mines was transferred from central to the local governments with further decentralizing control of the coal sector. By 2002, all the prices of coal, even for power generation, were relaxed. In about twenty years the coal sector had shifted from a central planning to a market-based and decentralized system. This paper explains these remarkable market-oriented and decentralized reforms in the coal sector and explores their implications for the power sector, now the largest single consumer of coal. There is much research on China’s coal sector outside China, but little on the reform of the coal sector within China. World Bank Energy Sector Management Assistance Program (ESMAP, 2004 and ESMAP, 2008) introduced many of the problems that China’s coal mining industry needs to address on the path towards sustainability, for example, safety, health and environmental problems. The International Energy Agency (IEA, 2007 and IEA, 2009) has addressed the coal supply and clean coal technology in China. The China Energy Group in Lawrence Berkeley National Laboratory has researched energy efficiency and strategy (Sinton et al., 2005 and Zhou Nan and McNeil, 2007). The Industrial Performance Center in MIT published several working papers relevant to China’s coal sector (Lester and Steinfeld, 2006 and Lester and Steinfeld, 2007) with an emphasis on the pattern of coal uses. Australian Bureau of Agricultural and Resource Economics and Japanese Institute of Energy Economics have done a series of research on China’s coal, with a focus on China’s coal import and export projections (Ball et al., 2003, Schneider, 2004, Sagawa and Koizumi, 2007 and Sagawa and Koizumi, 2008). Thomson (2003) used the coal industry in China as a case study of the country’s economic development as a whole. Rui (2005) analyzed different types of Chinese coal mining enterprises in the context of global change in coal industry and their implications for China. Wang (2007) explored the imbalanced development of coal and power sectors, and proposed that the imbalance was caused by government intervention. Zhang and Heller (2007) explained the phenomenon that China’s power sector reform stalled. Rosen and Houser (2007) analyzed China’s energy demand and supply system and its global impacts. There is some research regarding the coal sector inside China. Pan et al. (2002) compared the coal market concentration between China and the USA and argued that the market concentration in China was too low. Yu and Yu (2006) proposed the vertical regulation model between coal and power to solve the conflict between the two sectors. Lin et al. (2007) estimated the long-term coal demand in China and proposed that the coal supply capacity should expand rapidly to match the demand. Xiao et al. (2008) used a Vector Auto Regression (VAR) model to analyze the effect of coal mine safety regulation, and found the long-term effect is significant. Shi (2008) evaluated the opening up and reform program of energy industry in China, but did not explore the driving forces and implications of the reforms. Most of the research inside China has emphasised on coal mine safety, coal demand projection and vertical regulation, but there has been very little on the causes and effects of coal sector reform. The hypothesis of this paper is that the market-oriented and decentralized reforms in the coal sector were influenced by the changes in state energy investment priority as well as the relationship between the central and local governments in the context of broader reforms within China’s economy. However, those reforms have not influenced all related sectors equally. Although the central government had allowed substantial market-oriented and decentralized reforms in coal sector, those reforms have not easily extended to the power sector. These fragmented reforms have had significant implications. Since coal is the primary input into Chinese power generation, and power sector reform has lagged behind coal sector reform, the tension between the power and coal sectors is unavoidable and raises concerns about electricity shortage. The rest of the paper is organized as follows: Section 2 illustrates the initial conditions of coal sector reform in terms of administration, finance and pricing, and discusses relationship between coal and power sectors under central planning in China; and discuss subsequent stages of reform in the coal sector and their implications for the power sector; Section 5 concludes the study.

The coal sector is integral to the Chinese economy. It provides about 70% of nation’s primary commercial energy supply, generates about 80% of the electricity and in addition supports millions of employees. After the Peoples Republic of China was founded in 1949, the coal sector was placed under central planning and given priority to develop to boost the downstream heavy industries. The market-oriented reforms initiated by the Chinese central government influenced the coal sector directly as well as through the channels of state energy development priority and relationship between central and local governments. Under the influence of the broader reforms in the Chinese economy, the priority of state energy development changed from the whole sector to electric power, then to energy preservation; and local governments were given more and more independent authorities from the central government to boost the local economy. All of these caused market-oriented and decentralized reforms in the areas of administration, finance and pricing in the coal sector. However, these market-oriented and decentralized reforms have not equally influenced the power sector, now the largest single consumer of coal, even though the initial coal sector reform spurred the power generation. These fragmented reforms have significant implications. Because coal is the primary input into Chinese power generation, the tension between the power and coal sectors is unavoidable and has raised concerns about electricity shortage. Since 2002 the central government has been dealing with the consequences of these reforms. Even though the central government now encourages the vertical integration of coal and power to mitigate the conflict, it is necessary that the vertical integration process should be very deliberate; the ownership of key national power companies belongs to the central government, which has control over power selling price and railway transportation while Major State Coal mines, except the Shenhua Group, belong to the local governments, which have control over coal selling price. The central and local governments need to be carefully managed so as to avoid coal supply disruption.