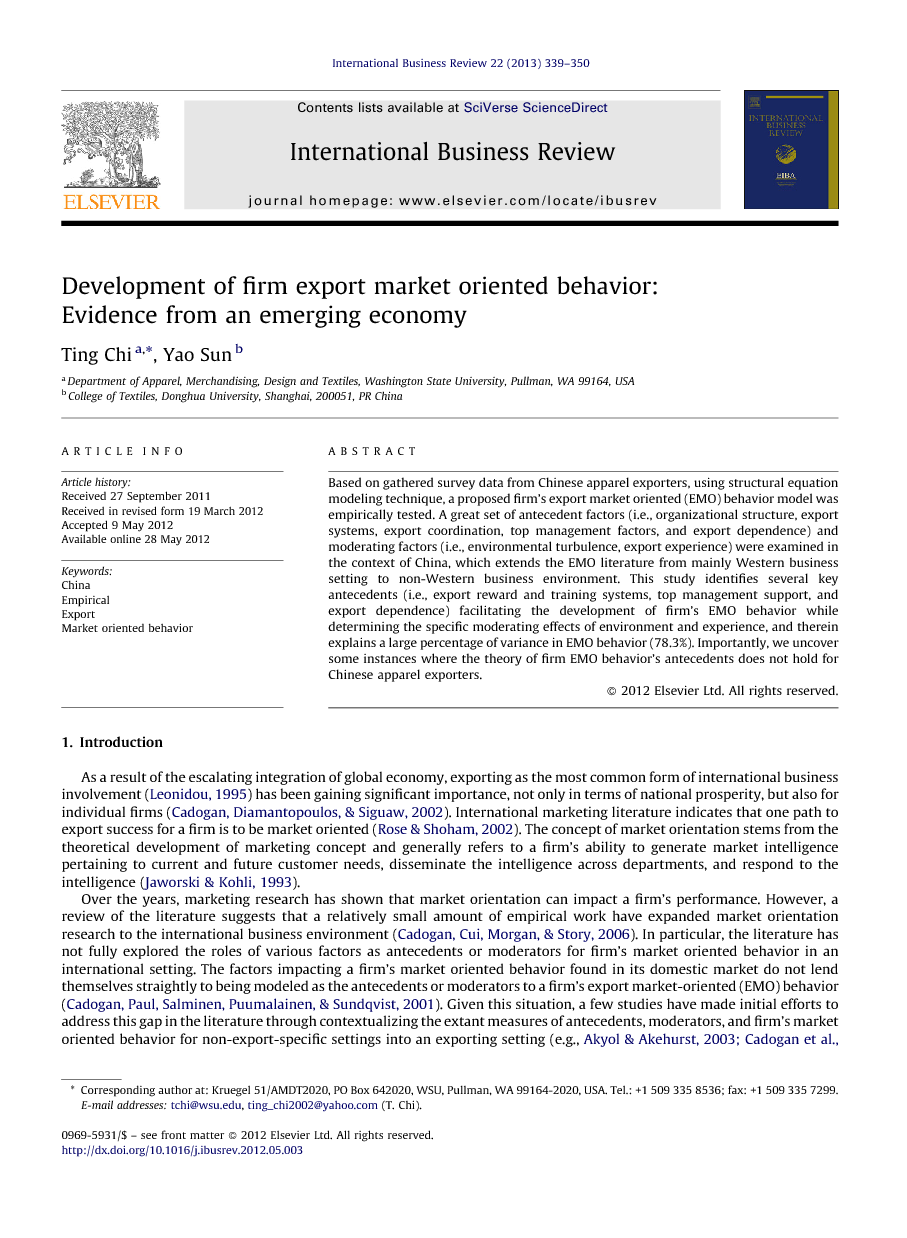 As a result of the escalating integration of global economy, exporting as the most common form of international business involvement (Leonidou, 1995) has been gaining significant importance, not only in terms of national prosperity, but also for individual firms (Cadogan, Diamantopoulos, & Siguaw, 2002). International marketing literature indicates that one path to export success for a firm is to be market oriented (Rose & Shoham, 2002). The concept of market orientation stems from the theoretical development of marketing concept and generally refers to a firm's ability to generate market intelligence pertaining to current and future customer needs, disseminate the intelligence across departments, and respond to the intelligence (Jaworski & Kohli, 1993). Over the years, marketing research has shown that market orientation can impact a firm's performance. However, a review of the literature suggests that a relatively small amount of empirical work have expanded market orientation research to the international business environment (Cadogan, Cui, Morgan, & Story, 2006). In particular, the literature has not fully explored the roles of various factors as antecedents or moderators for firm's market oriented behavior in an international setting. The factors impacting a firm's market oriented behavior found in its domestic market do not lend themselves straightly to being modeled as the antecedents or moderators to a firm's export market-oriented (EMO) behavior (Cadogan, Paul, Salminen, Puumalainen, & Sundqvist, 2001). Given this situation, a few studies have made initial efforts to address this gap in the literature through contextualizing the extant measures of antecedents, moderators, and firm's market oriented behavior for non-export-specific settings into an exporting setting (e.g., Akyol and Akehurst, 2003, Cadogan et al., 2006, He and Wei, 2011, Lingyee, 2004 and Murray et al., 2007). Notwithstanding this development, the understanding of a firm's EMO behavior is still far from satisfactory (Cadogan et al., 2006). The rich complexity of international markets warrants further research. In addition, most published empirical studies were focused on the developed nations or regions featured with Western business cultures (e.g., United States, Italy, New Zealand, etc.), while developing nations, emerging economies (e.g., China, India, etc.) in particular, have not been given enough attentions even though firms from developing nations have been actively involved in exporting business in the past several decades and been playing a crucial role in international trade. It is noted that generalizing findings on firm's EMO behavior from Western to non-Western business contexts may be misleading (Lingyee, 2004). As Ambler, Styles, and Wang (1999) indicated, there is a need for more studies into the transferability of Western exporting research to the non-Western business setting. In this respect, Cadogan et al. (2001) contend that the antecedents of firm's EMO behavior may be partially nation-specific. Consequently, the purpose of this study is to shed new light on the antecedent and moderating factors to firm's EMO behavior on three fronts. First, the geographic coverage of EMO study is extended from a focus of developed nations or regions to the largest emerging economy China. The generalizability of previous findings on the development of firm's EMO behavior in the Chinese business setting is examined. The second contribution is to extend the previous firm's EMO behavior models by integrating antecedent and moderating factors validated in the previous studies. Using the primary data gathered by an industrial survey of Chinese apparel exporters, the reliability and validity of the proposed firm's EMO behavior model are examined and the developed hypotheses are tested. As a result, this study adds richness to the understanding of how a firm's EMO behavior can be facilitated and managed. Finally, through analyzing the export success of Chinese apparel manufacturers from a marketing management perspective (i.e., market orientation) this study brings an extended insight into the international business area.

EMO has been widely recognized as providing firm with a source of competitive advantage (Moen & Servais, 2002). A firm with sound EMO capabilities should be able to convert them into a positional advantage (i.e., superior customer value, lower relative cost) (Cadogan et al., 2002). Building on comprehensive literature review and rigorous research design and statistical analysis, this study provides theoretical and empirical support for the notion that certain export processes, structure, systems, and leadership can help facilitate or inhibit the development of a firm's EMO behavior. We successfully identify several key determinants of EMO behavior in the Chinese business setting, and therein explain a large percentage of variance (78.3%). Importantly, our findings indicate that concerns are justified over the generalizability of export marketing theory. Specifically, we uncover several instances which show that the theory of EMO behavior's antecedents does not hold for this type of Chinese exporters, and provide implications for Chinese firms to develop their EMO behavior. First, efficiency generated by more formalized and centralized organizational structure cannot offset the loss of flexibility and responsiveness. Consequently, hierarchical and bureaucratic structure inhibits Chinese apparel exporters being more market oriented. This is particularly true when a firm operates in a highly turbulent environment. Therefore, designing and implementing less formalized structure and more decentralized decision-making process will help Chinese firms develop EMO behavior. Second, export coordination found to be critical in determining EMO behavior among Western exporters is not found to have the same influence in China. There is only very marginal impact identified from coordination aspect. This difference might be caused to some degree by the fact that SMEs are the majority in the Chinese apparel industry. Given the size, SMEs face less challenge in unifying a firm's capabilities into a cohesive whole, driving its learning processes, and directing its organizational activities compared to big corporations. This contradictory finding warrants further empirical investigations. Third, while the proven influences of top management support and export dependence are consistent with previous findings in Western contexts, the prominent association of reward systems to EMO behavior challenges the notion that incentive systems work in more individualist cultures and may not work effectively in relatively more collectivist societies (Cadogan et al., 2006). It is evident that incentives spur the development of EMO behavior in transitional society as well. We argue that collectivist society might not be an accurate and complete description of today's China. This emerging phenomenon has been increasingly reported by recent studies (e.g., Chi, 2011, Li and Peng, 2008 and Quer et al., 2007). Given its nascent and inconclusive nature, there is a need for more studies to better understand this issue. Finally, although if having export experience is the prerequisite for a firm to enter international markets has been questioned by born global scholars, in this study, export experience does play a positive role in moderating the impacts of reward and training systems, managers’ support, and export dependence on Chinese firm's EMO behavior. Overall, this study sheds new light on the antecedent and moderating factors to firm's EMO behavior in the context of an emerging economy (China). Since the proposed model shows sound and stable psychometric properties while the parsimonious statistical criteria are also well met by all constructs, it offers a valid and reliable tool to investigate firm's EMO behavior in other emerging economies. In addition, the transition happening in the Chinese apparel manufacturing sector is an epitome of the entire Chinese manufacturing industry (Chi, 2011), the methodology may, therefore, be transferred to studies targeting other industrial sectors.