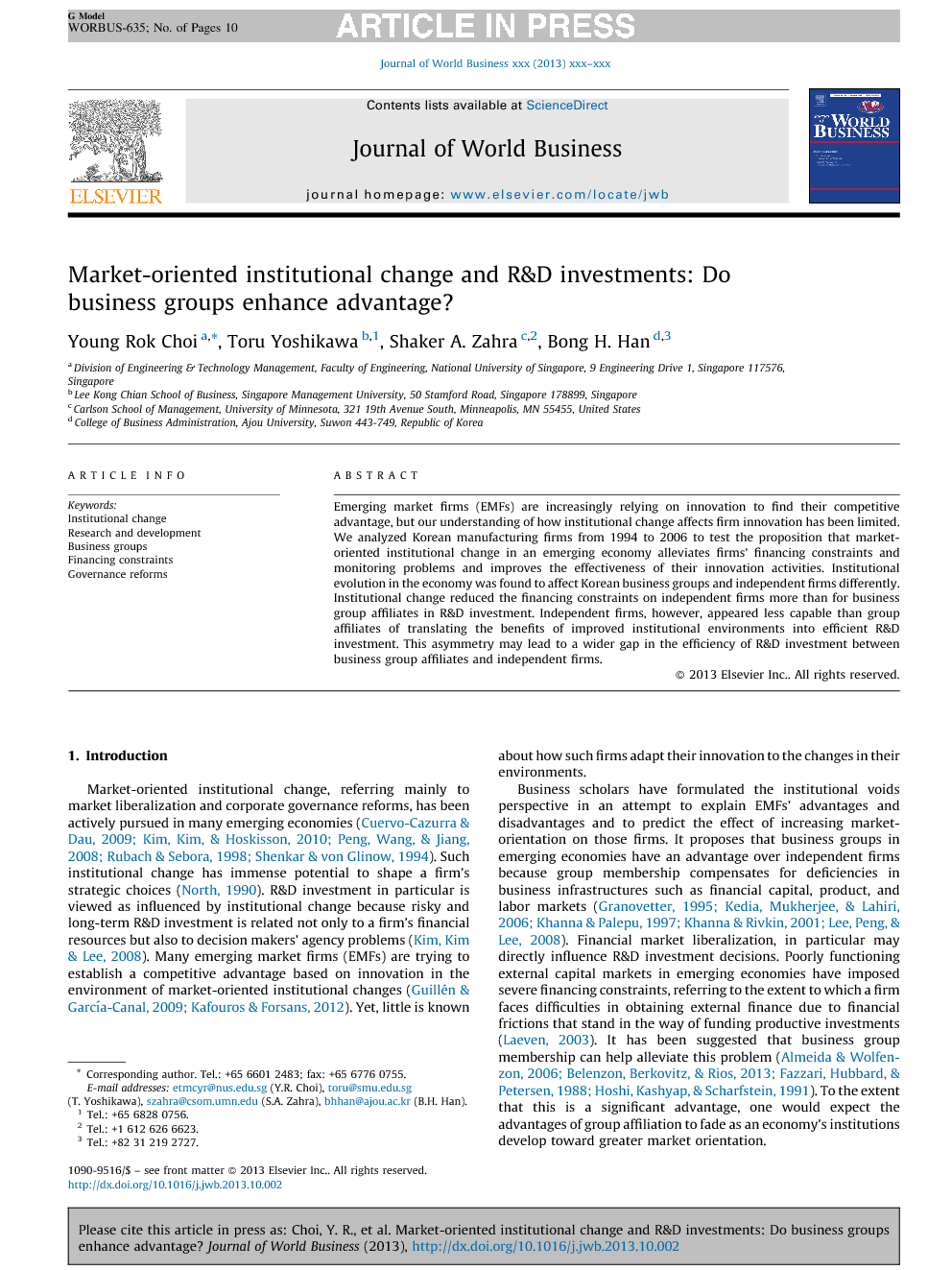 Market-oriented institutional change, referring mainly to market liberalization and corporate governance reforms, has been actively pursued in many emerging economies (Cuervo-Cazurra and Dau, 2009, Kim et al., 2010, Peng et al., 2008, Rubach and Sebora, 1998 and Shenkar and von Glinow, 1994). Such institutional change has immense potential to shape a firm's strategic choices (North, 1990). R&D investment in particular is viewed as influenced by institutional change because risky and long-term R&D investment is related not only to a firm's financial resources but also to decision makers’ agency problems (Kim, Kim & Lee, 2008). Many emerging market firms (EMFs) are trying to establish a competitive advantage based on innovation in the environment of market-oriented institutional changes (Guillén and García-Canal, 2009 and Kafouros and Forsans, 2012). Yet, little is known about how such firms adapt their innovation to the changes in their environments. Business scholars have formulated the institutional voids perspective in an attempt to explain EMFs’ advantages and disadvantages and to predict the effect of increasing market-orientation on those firms. It proposes that business groups in emerging economies have an advantage over independent firms because group membership compensates for deficiencies in business infrastructures such as financial capital, product, and labor markets (Granovetter, 1995, Kedia et al., 2006, Khanna and Palepu, 1997, Khanna and Rivkin, 2001 and Lee et al., 2008). Financial market liberalization, in particular may directly influence R&D investment decisions. Poorly functioning external capital markets in emerging economies have imposed severe financing constraints, referring to the extent to which a firm faces difficulties in obtaining external finance due to financial frictions that stand in the way of funding productive investments (Laeven, 2003). It has been suggested that business group membership can help alleviate this problem (Almeida and Wolfenzon, 2006, Belenzon et al., 2013, Fazzari et al., 1988 and Hoshi et al., 1991). To the extent that this is a significant advantage, one would expect the advantages of group affiliation to fade as an economy's institutions develop toward greater market orientation. Agency theory scholars, however, disagree with the institutional voids argument. They focus on the failure of internal capital markets and point out that business groups often involve unproductive cross-subsidization among the members in terms of providing loans or loan guarantees, equity investment, and internal transactions designed to help unprofitable affiliates (Bae et al., 2002, Estrin et al., 2009, Ferris et al., 2003, Friedman et al., 2003 and Whited, 2001). They suggest that the performance of business group affiliates may suffer from severe governance problems (Cuervo-Cazurra, 2006) and that institutional change that fixes governance problems, such as legal provisions to protect minority shareholders, should increase group members’ advantages and improve their performance (Cuervo-Cazurra and Dau, 2009 and Klapper and Love, 2004). The empirical results testing these contrasting theories have been mixed. Studies have found that the performance of business groups in Chile (Khanna & Palepu, 2000a) and Korea (Lee et al., 2008) declined over time as institutions in those economies developed. However, some studies informed no relationship. For instance, Chari and David (2012) found that business group affiliation did not weaken the negative effect of pro-market reforms on sustainability of superior profits among Indian companies. Further, a growing number of studies focusing on governance have shown that firms with governance problems perform better than firms with less serious governance problems after institutional change (Cuervo-Cazurra & Dau, 2009). The divergent theories and empirical evidence hint that the effect of institutional change is more complex than has been considered in past research, demanding a more careful investigation, in particular of the difference in governance among EMFs. The purpose of this study is to investigate how the R&D investments of business group affiliates relate to their internal cash resources and growth opportunities. The relationships are compared with those of independent firms in the early and late phases of market-oriented institutional change in Korea. This involves directly accounting for the financing constraints during different phases of institutional change that would also impose differing pressures on business groups to reform their corporate governance. The tension between the two approaches is considered as lying in the efficacy of business group affiliation as either an effective mechanism for alleviating financing constraints or an ineffective mechanism creating agency costs. Hence, as firms’ both financing constraints and corporate governance reforms fluctuate with institutional change in the economy, this may explain any association between observed R&D investment and perceived growth opportunities, thus linking market-oriented institutional change to the efficiency of R&D investment. This study extends prior work in several ways. The results show evidence of a strong relationship between market-oriented institutional change and R&D investment. Considering both the financing constraints and corporate governance perspectives together helps to better explain how the R&D investment decisions of group affiliates and independent firms are affected differently by institutional evolution. The findings also suggest that the institutional voids perspective is incomplete, as business groups may improve the efficiency of their R&D investment more than independent firms through a strong governance reforms in the wake of the significant institutional changes triggered by the financial crisis.