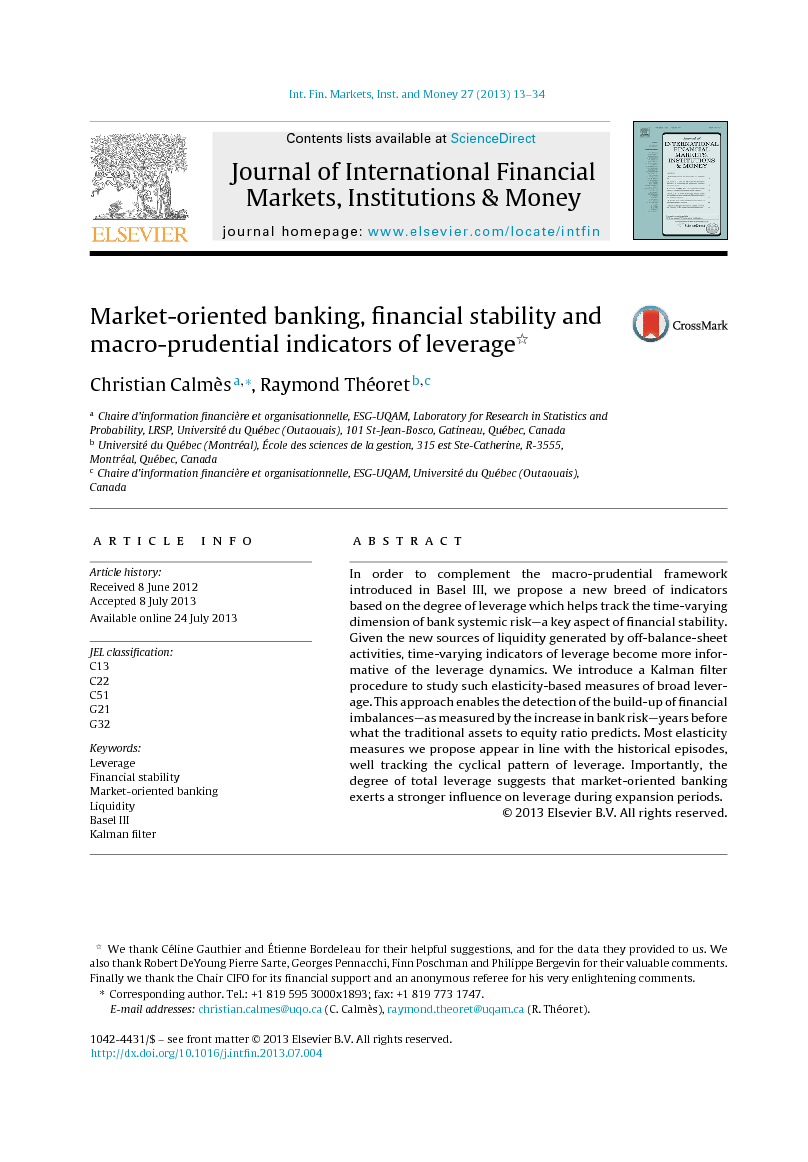 In order to complement the macro-prudential framework introduced in Basel III, we propose a new breed of indicators based on the degree of leverage which helps track the time-varying dimension of bank systemic risk—a key aspect of financial stability. Given the new sources of liquidity generated by off-balance-sheet activities, time-varying indicators of leverage become more informative of the leverage dynamics. We introduce a Kalman filter procedure to study such elasticity-based measures of broad leverage. This approach enables the detection of the build-up of financial imbalances—as measured by the increase in bank risk—years before what the traditional assets to equity ratio predicts. Most elasticity measures we propose appear in line with the historical episodes, well tracking the cyclical pattern of leverage. Importantly, the degree of total leverage suggests that market-oriented banking exerts a stronger influence on leverage during expansion periods.

Since banks were allowed to conduct off-balance-sheet (OBS) activities, their financial results have become more volatile (Stiroh, 2004, Stiroh, 2006a, Stiroh, 2006b, Stiroh and Rumble, 2006, Calmès and Liu, 2009, Calmès and Théoret, 2009 and Calmès and Théoret, 2010). Following the emergence of market-oriented banking,1 the fluctuations in Canadian banks net operating income growth have increased pari passu with the volatility of noninterest income ( Fig. 1). This volatility trend relates to bank market-oriented business lines, in particular the trading and capital markets activities generating trading and fee income 2 ( Fig. 2). There is also evidence that the higher risk-taking associated with OBS banking results in greater levels of bank leverage. Diversification in OBS activities thus leads to increased systemic risk, 3 which runs counter to financial stability.Being based on micro-prudential policies, the Basel I and II framework does not properly address the systemic risk related to bank diversification in OBS activities. Basel I and II rather contribute to increase it because the capital rules they impose increase procyclicality in the banking system.4 For example, banks may get involved in regulatory capital arbitrage to dodge the regulatory capital constraints—an obvious source of procyclicality (Calomiris and Mason, 2004, Ambrose et al., 2005, Brunnermeier, 2009, Kling, 2009, Cardone Riportella et al., 2010 and Nijskens and Wagner, 2011). To maintain financial stability in the new banking context, a macro-prudential framework must be set-up (Allen et al., 2011, Shoenmaker and Wierts, 2011 and Schoenmaker and Wagner, 2011). In this respect, Basel III5 introduces macro-prudential rules to tackle the procyclicality6 generated by Basel I and II capital rules. The main device put in place to control procyclicality is a capital buffer.7 When the economy is improving—i.e., when credit growth is above its trend—the buffer increases (and it decreases in a downturns). Basel III also launches a compulsory leverage ratio (LRR)—an unweighted risk ratio defined as Tier 1 capital to total assets—to constrain the build-up of leverage in the banking sector, to avoid excessive deleveraging, and to reinforce the risk-based requirements with a simple non-risk based backstop measure. Apart from credit growth, indicators tracking bank systemic risk are seriously missing.8 However, credit growth and leveraging are two sides of the same coin, since financial leverage is the main driver of credit growth (e.g., Stein, 2010, Brunnermeier and Sannikov, 2011 and Shleifer and Vishny, 2011).9 Leverage is thus a key financial indicator of risk (Modigliani and Miller, 1958, Miller and Modigliani, 1961, Hamada, 1972, Rhee, 1986, DeYoung and Roland, 2001, Griffin and Dugan, 2003, Lorenzoni, 2007, Cihak and Schaeck, 2007 and Stein, 2010). As a matter of fact, Basel III attributes the recent crisis to the build-up of excessive leverage, especially off-balance-sheet leverage. Surprisingly, despite the cyclical contribution of OBS activities to bank risk, broad leverage—as an indicator of bank systemic risk—remains an under-researched field in the literature ( Bell, 2000). The Basel III LRR incorporates important OBS components, 10 and judging by the Canadian experience with its mandatory ratio—an indicator similar to the Basel III LRR—it should better account for the cyclicality of bank leverage. Nevertheless, we argue that this type of leverage ratios still miss some important dynamic properties of bank leverage. In this study, we develop new macro-prudential indicators of leverage designed to track bank systemic risk. Since systemic risk is time-varying, we introduce a set-up specifically suited to capture the cyclical nature of bank leverage. As the dual of a dynamic programming problem, our new approach based on the Kalman filter enables the computation of optimal leverage paths conditional on all available information (Ljungqvist and Sargent, 2004, Stein, 2010 and Stein, 2011). This methodology also addresses an important issue associated with elasticity-based measures of leverage, namely their lack of stability. Thanks to the Kalman filter we can generate smoothed time series for any time-varying leverage measure considered. Our analysis of leverage dynamics suggests that the ratio of liquidity, a key source of financial imbalances, is an important driver of the Kalman-filtered series of leverage. In the context of market-oriented banking, liquidity is obviously a significant factor influencing leverage since market-oriented activities provide a sui generis source of funding to financial institutions (e.g., Gorton and Pennacchi, 1990, Loutskina, 2011 and Stein, 2011). Adding to this literature, we find that the sensitivity of the degree of total leverage to liquidity is strongly conditioned by the phase of the business cycle. Importantly, our results suggest that bank non-traditional activities exert a stronger influence on the degree of total leverage during expansion periods, thereby accentuating leverage procyclicality. This paper is organized as follows. Section 2 discusses some drawbacks of the traditional bank leverage ratios. Section 3 describes our elasticity-based measures and the Kalman filter methodology we employ to derive optimal degree of leverage indicators. In Section 4, we present the Canadian and U.S. datasets and some basic empirical facts, while in the fifth section we analyze the cyclical pattern of our elasticity-based leverage indicators. The last section concludes.

The latest credit crisis has brought to the forefront the need to strengthen financial stability by better monitoring the build-up of systemic risk. There has been an increased recognition that regulation should take an holistic view of the financial system, in opposition to focusing only on individual institutions. The formulation of macro-prudential policies becomes an imperative in order to foster financial stability. Yet, indicators of systemic risk are still seriously missing. In this respect, our contribution is to introduce a new breed of risk indicators—i.e., elasticity-based measures of leverage—to track systemic risk and complement the macro-prudential framework put in place in Basel III. IMF research finds a substantial variation of risk-weighted assets across financial institutions and countries. This is one reason why Basel III introduces a leverage ratio (Schoenmaker, 2013). However, conventional leverage indicators are not properly designed to capture bank systemic risk. Obviously, they did not pick up any meaningful signal of the mounting systemic risk before the subprime crisis. In Canada, they remained almost unchanged in recent decades, while the banking landscape was undergoing a tremendous metamorphosis. As argued in our paper, conventional leverage measures are distorted by regulatory arbitrage which cuts the link between these measures and systemic risk. Basel III is introducing a leverage ratio similar to the one already imposed by the Canadian OSFI. The objective is to develop a non-risk based measure calibrated to act as a credible supplementary measure to the risk-based capital requirements. This kind of accounting measure of leverage can play a useful role by helping to identify rising leverage, even when risk-adjusted capital metrics may suggest stable or declining risk profiles. However, we find that there are some shortcomings associated with the kind of mandatory leverage ratio imposed by OSFI. First, different levels of risk may still be associated with a given value of leverage. Second, this kind of leverage ratios may not fully track the dynamics of OBS activities. Third, the link between these leverage ratios and the behavior of bank risk is quite loose over the business cycle. Fourth, they are subject to capital and liquidity arbitrage, which runs counter to the spirit of macro-prudential policy. Finally, judging by the Canadian experience, this type of indicators could be disproportionably sensitive to deleveraging because of the loan commitments dynamics. The deleveraging sensitivity might be problematic for the Basel III leverage ratio requirement (LLR). Indeed, the Basel ratio is not very different from the Canadian mandatory measure, although it integrates securitization activities and defines capital in a narrower sense (e.g., excluding long-term debentures from capital). This difference could further accentuate the Basel III leverage sensitivity to deleveraging because banks might find harder adjusting their capital whenever the regulatory capital constraint will bind. Since debentures are arguably a more accessible source of funding than equity, banks will likely sell more assets, accelerating further the deleveraging process. The main results of this paper pertain to the cyclical pattern of bank leverage, which is generally better described when accounting for the influence of noninterest income and broad liquidity. In this respect, we argue that using elasticity-based leverage measures instead of accounting ratios may present important benefits. Our results suggest that one of these elasticity-based measures, the degree of total leverage (DTL), is particularly well suited to tackle the drawbacks of the accounting ratios. First, it is responsive to OBS activities in expansion periods. Second, the asymmetric impact of liquidity on this indicator is quite pronounced, consistent with the procyclical effect of OBS banking on leverage. Third, the different levels of risk associated with the income flows of bank asset categories, on and off-balance-sheet, are implicitly weighted in the DTL measure. In spite of the important impact of OBS activities on bank leverage, studies focusing on OBS-induced leverage are quite rare. Based on our results, the kind of regulatory leverage to be implemented under Basel III might not necessarily be a sufficient statistic of leverage. Although it can help monitor bank leverage, our analysis leads us to the conclusion that additional measures should be considered to get a clearer picture of bank leverage, each providing complementary information on the stance of bank risk at various time frequencies. In particular, we would encourage the use of indicators accounting for the dynamic role played by OBS-induced liquidity. Our study proposes such indicators which help account for the time-varying dimension of systemic risk. The indicator of bank stress retained by Basel III to implement its capital buffer device is the growth of credit with respect to GDP. However, this measure may be unstable in the short-run and therefore quite difficult to interpret. By comparison, our measures behave smoothly and track systemic risk quite well. Used in conjunction with other indicators, such as credit growth, our proposed indicators will help financial supervisors to take the appropriate measures—like increasing buffer capital—when these indicators signal rising systemic risk.