عنوان انگلیسی
Does it pay for firms in Asia's emerging markets to be market oriented? Evidence from Vietnam
دانلود فوری مقاله + سفارش ترجمه 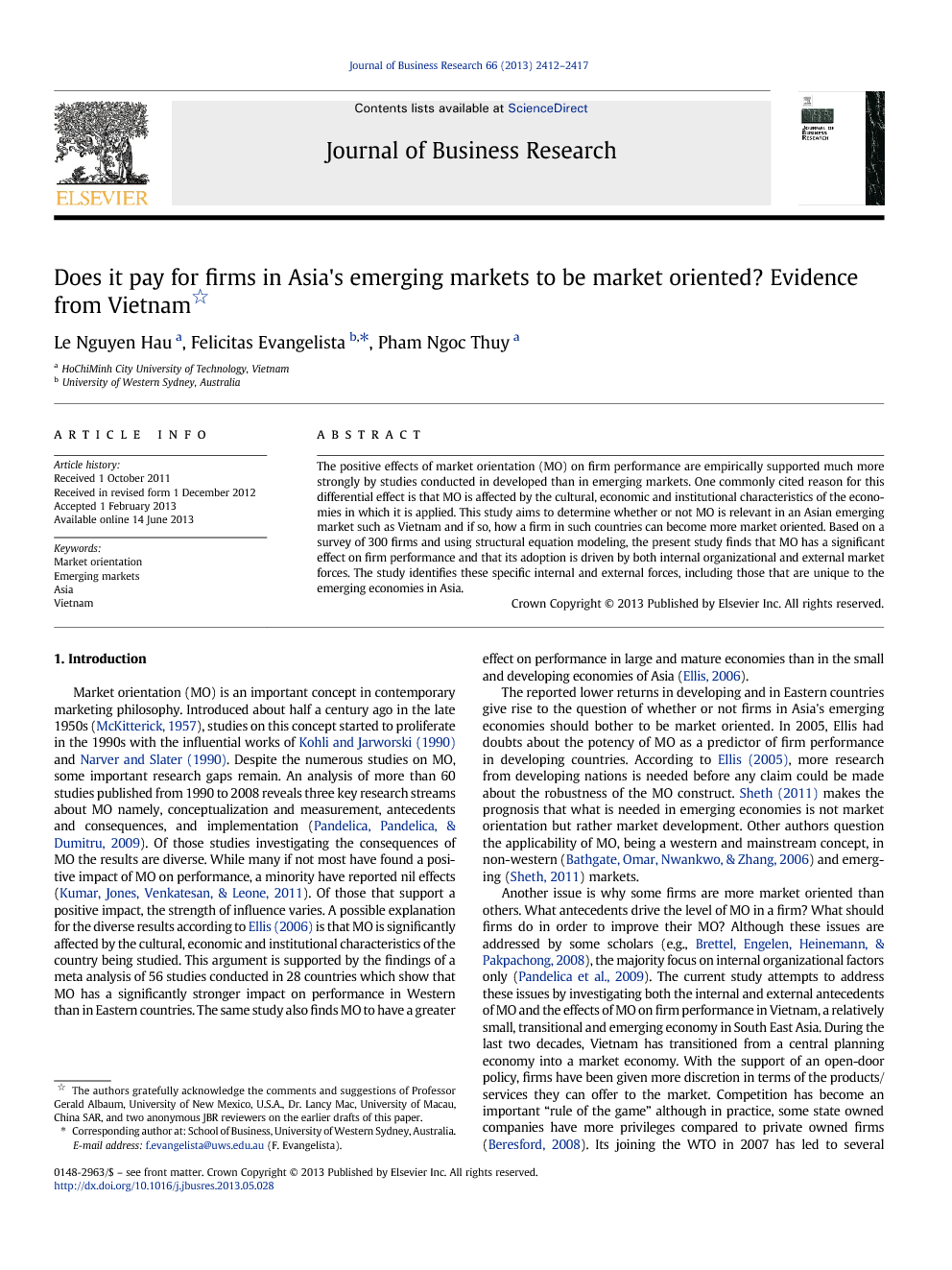 The positive effects of market orientation (MO) on firm performance are empirically supported much more strongly by studies conducted in developed than in emerging markets. One commonly cited reason for this differential effect is that MO is affected by the cultural, economic and institutional characteristics of the economies in which it is applied. This study aims to determine whether or not MO is relevant in an Asian emerging market such as Vietnam and if so, how a firm in such countries can become more market oriented. Based on a survey of 300 firms and using structural equation modeling, the present study finds that MO has a significant effect on firm performance and that its adoption is driven by both internal organizational and external market forces. The study identifies these specific internal and external forces, including those that are unique to the emerging economies in Asia.

Market orientation (MO) is an important concept in contemporary marketing philosophy. Introduced about half a century ago in the late 1950s (McKitterick, 1957), studies on this concept started to proliferate in the 1990s with the influential works of Kohli and Jarworski (1990) and Narver and Slater (1990). Despite the numerous studies on MO, some important research gaps remain. An analysis of more than 60 studies published from 1990 to 2008 reveals three key research streams about MO namely, conceptualization and measurement, antecedents and consequences, and implementation (Pandelica, Pandelica, & Dumitru, 2009). Of those studies investigating the consequences of MO the results are diverse. While many if not most have found a positive impact of MO on performance, a minority have reported nil effects (Kumar, Jones, Venkatesan, & Leone, 2011). Of those that support a positive impact, the strength of influence varies. A possible explanation for the diverse results according to Ellis (2006) is that MO is significantly affected by the cultural, economic and institutional characteristics of the country being studied. This argument is supported by the findings of a meta analysis of 56 studies conducted in 28 countries which show that MO has a significantly stronger impact on performance in Western than in Eastern countries. The same study also finds MO to have a greater effect on performance in large and mature economies than in the small and developing economies of Asia (Ellis, 2006). The reported lower returns in developing and in Eastern countries give rise to the question of whether or not firms in Asia's emerging economies should bother to be market oriented. In 2005, Ellis had doubts about the potency of MO as a predictor of firm performance in developing countries. According to Ellis (2005), more research from developing nations is needed before any claim could be made about the robustness of the MO construct. Sheth (2011) makes the prognosis that what is needed in emerging economies is not market orientation but rather market development. Other authors question the applicability of MO, being a western and mainstream concept, in non-western (Bathgate, Omar, Nwankwo, & Zhang, 2006) and emerging (Sheth, 2011) markets. Another issue is why some firms are more market oriented than others. What antecedents drive the level of MO in a firm? What should firms do in order to improve their MO? Although these issues are addressed by some scholars (e.g., Brettel, Engelen, Heinemann, & Pakpachong, 2008), the majority focus on internal organizational factors only (Pandelica et al., 2009). The current study attempts to address these issues by investigating both the internal and external antecedents of MO and the effects of MO on firm performance in Vietnam, a relatively small, transitional and emerging economy in South East Asia. During the last two decades, Vietnam has transitioned from a central planning economy into a market economy. With the support of an open-door policy, firms have been given more discretion in terms of the products/ services they can offer to the market. Competition has become an important “rule of the game” although in practice, some state owned companies have more privileges compared to private owned firms (Beresford, 2008). Its joining the WTO in 2007 has led to several opportunities (e.g. international trade and international business cooperation), as well as threats (i.e., severe competition) (Nguyen & Nguyen, 2011). Thus, with the emergence of a market economy, Vietnam provides a suitable context for investigating the adoption of MO and its consequences. The present study aims to expand the current understanding about the relevance of MO in Asia where many emerging economies such as China, India, Indonesia, Thailand, Vietnam and others are located. The proposed conceptual framework focuses on the role of both the external and internal environments in determining the MO level of firms while the data obtained in Vietnam serve to test this framework. The next section of this article presents the theoretical background of the research followed by the proposed theoretical model, research methods, results, discussion and conclusion.

The results of the study support the view that responsiveness is a dimension of MO, in addition to, customer orientation, competitor orientation and interfunctional coordination. Its high factor loading (0.78) shows that acting on market changes in an appropriate and timely manner is part and parcel of being market oriented. Together, the four dimensions explain a high 48% of the variation in firm performance. These findings provide concrete evidence that the concept of MO is both applicable and relevant and that it does pay for firms in Vietnam to be market oriented. At the surface, this finding seems to contradict Sheth's (2011) view that firms in emerging markets should take a market development rather than a market orientation stance and that firms should focus on converting non-users to users rather than on existing customers. A closer assessment of Sheth's proposition would however show that in the long run, it is not a question of one view or the other as new customers will need to be satisfied for them to remain loyal to a firm or its products. In terms of the question of why some firms are more market oriented than others, the results show that the answer lies in both external and internal forces. The external challenges brought about by competition and market turbulence cause firms to become more market oriented. Between these two, the latter has a greater impact (0.77 vs. 0.54). The changes on the demand side are more compelling possibly because the consumer base in emerging markets is changing rapidly. Internally, both the competence and the commitment of a firm's leader(s) are instrumental in developing a market orientation with the former having a greater impact. The capabilities of top management more than their values and beliefs drive firms to become more market oriented. The self-efficacy of a firm's leader is a more powerful force possibly because this is a vital resource in an emerging economy where formal management systems are either inexistent or underdeveloped. Although the hypotheses of this study are tested in only one small emerging and transitional market, a number of implications can be drawn. Firms, both domestic and multinational, that are operating in emerging markets such as Vietnam can enhance their performance by improving customer and competitor orientations, and interfunctional coordination; and responding appropriately to market changes. To be more market oriented, top management needs to pay greater attention to the fast changing customer base and upgrading their management capabilities. Overall, this study provides concrete evidence supporting the hypotheses about MO in emerging markets. The evidence also shows that despite its Western origin, MO is robust enough to be relevant and adaptable to a non-western, Asian market environment. It is very likely that these empirical findings are tenable in other emerging markets in Asia because firms in the region share similar internal and external characteristics. Like Vietnam, these countries are characterized by high power distance cultures and fast changing economic and socio-political environments. Internally, firms in these countries tend to be reliant on top management for direction and approach towards customers and competitors. The ability to respond quickly and appropriately to market changes which is found in this study to be more important than competitor orientation would resound well across Asia's fast growing markets. This study therefore makes a number of contributions. First, the study expands the concept of MO to include responsiveness in addition to customer orientation, competitor orientation and interfunctional coordination. Responsiveness is therefore not to be ignored when operating in the dynamic emerging markets of Asia. Second, this study provides statistically significant evidence that the environmental challenges and the commitment and competencies of top management determine the MO level of firms. Where firms are engaged with a fast changing market and intense competition, and where firms have a committed and competent leadership, MO intensifies and becomes an effective tool for successful business performance. These antecedents of MO appear to be unique to emerging markets particularly in Asia. Third, the results obtained in this study provide strong support to the main premise that MO is affected by the cultural, economic and institutional characteristics of the economies in which it is applied or that marketing is contextual. Together, these findings extend the literature about the theory and practice of MO in the emerging markets of Asia or where the conditions characterizing these markets as described in this paper are present. Further studies are however needed to validate and to build on these findings. Contextual qualitative studies designed to interrogate the nature and components of MO in countries with different political and economic systems would be a rich area for future research. Quantitative investigations involving samples from large, emerging or transitional economies such as India, Indonesia or China, and other small economies such as those in the South East Asian or South Asian regions would also be beneficial.