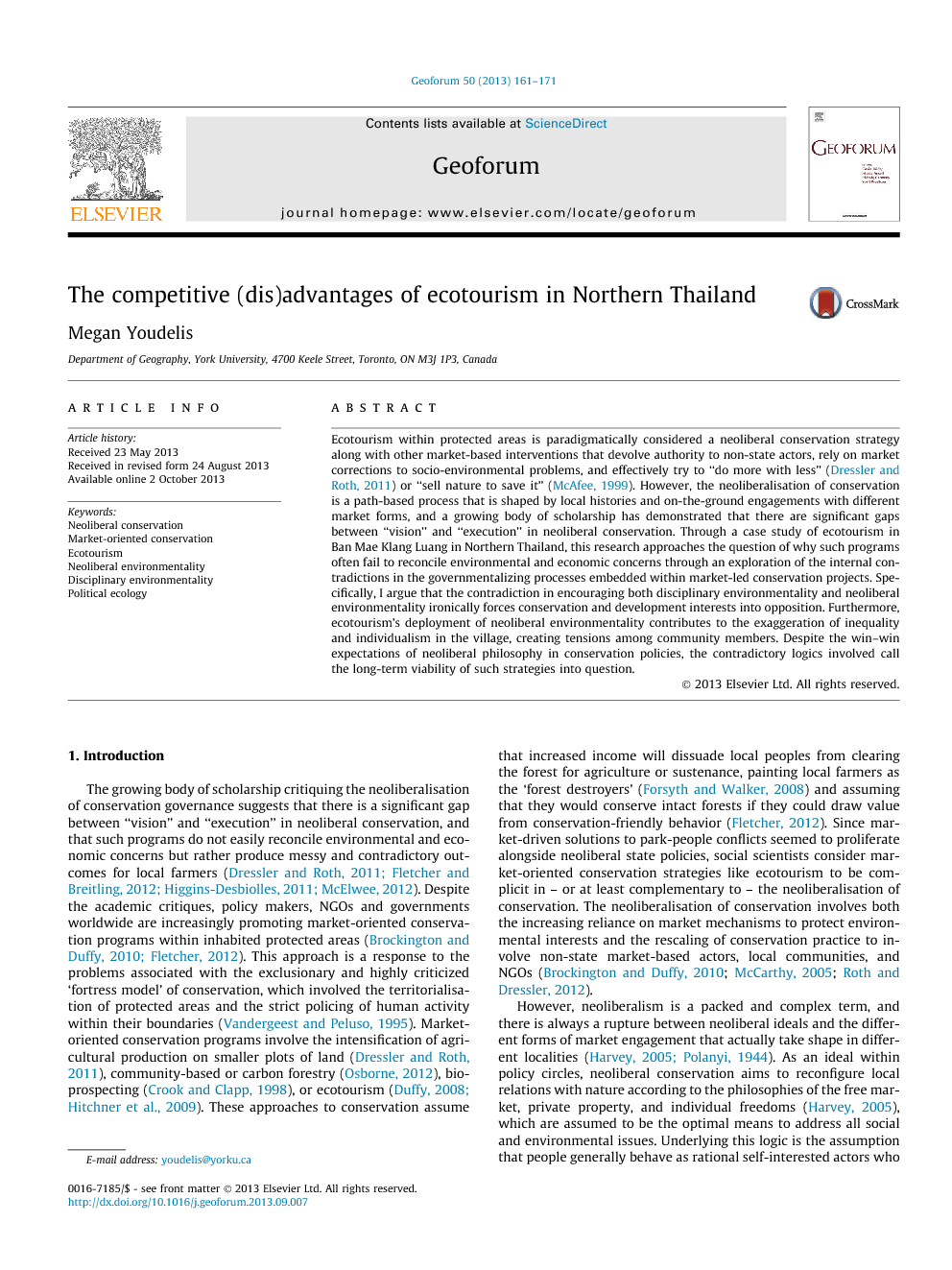 Ecotourism within protected areas is paradigmatically considered a neoliberal conservation strategy along with other market-based interventions that devolve authority to non-state actors, rely on market corrections to socio-environmental problems, and effectively try to “do more with less” (Dressler and Roth, 2011) or “sell nature to save it” (McAfee, 1999). However, the neoliberalisation of conservation is a path-based process that is shaped by local histories and on-the-ground engagements with different market forms, and a growing body of scholarship has demonstrated that there are significant gaps between “vision” and “execution” in neoliberal conservation. Through a case study of ecotourism in Ban Mae Klang Luang in Northern Thailand, this research approaches the question of why such programs often fail to reconcile environmental and economic concerns through an exploration of the internal contradictions in the governmentalizing processes embedded within market-led conservation projects. Specifically, I argue that the contradiction in encouraging both disciplinary environmentality and neoliberal environmentality ironically forces conservation and development interests into opposition. Furthermore, ecotourism’s deployment of neoliberal environmentality contributes to the exaggeration of inequality and individualism in the village, creating tensions among community members. Despite the win–win expectations of neoliberal philosophy in conservation policies, the contradictory logics involved call the long-term viability of such strategies into question.

This paper attempts to explain contradictory outcomes in market-oriented conservation by looking at the internal contradictions in distinct types of governmentalizing processes deployed through ecotourism as a conservation strategy. Fletcher’s (2010) post-structural political ecology framework explains that different discrete and contradictory environmentalities operate simultaneously when ecotourism is used as a conservation strategy. The simultaneous operation of neoliberal and disciplinary environmentalities, promoting the internalization of ethical norms as well as creating economic incentive structures to condition subjects’ behaviors, clearly forces conservation and development interests into opposition. Both types of environmentality are necessary for ecotourism, but they fundamentally contradict one another. This point is evident in the case of Ban Mae Klang Luang, as community members who are positioned to capitalize on entrepreneurial opportunities in ecotourism are finding that it would be more profitable to continue developing their businesses than to maintain smaller, lower-impact ventures. The incentive structures of ecotourism along with the training programs encouraging community members to seize ecotourism opportunities as an alternative to clearing the forest have also contributed to an increase in individualism, where individuals are free to pursue personal business goals and enter into competition with one another rather than managing ecotourism as a community. Since entrepreneurs are merely acting as rational economic actors within their means, others in the community feel that they cannot rightfully speak up and tell entrepreneurs to stop building. The ethos of economic individualism that sees the desire for more as a necessary motivating force behind economic growth obscures the social and environmental implications of behaving as such ( Gibson-Graham, 2006; Polanyi, 1944). This is creating palpable tensions and increasing inequality among community members as some are able to amass surplus value from ecotourism while others are not. Although ecotourism is quintessentially considered a neoliberal conservation strategy by social scientists (Roth and Dressler, 2012, Fletcher, 2012 and Igoe and Brockington, 2007), there are different forms of market engagement possible through ecotourism, some more protectionist and some more in line with neoliberal philosophies than others. Karl Polanyi (1944) distinguishes between protectionist or instituted markets and the ‘neoliberalised’ or ‘self-regulating’ market form. His concept of the “double movement”, where neoliberal policy makers push for ‘free’ market management while networks of actors push back to enact protectionist measures, is pertinent to the debates around market-led conservation. Through this lens, neoliberal conservation and development initiatives do not necessarily represent a break from the past, but rather are part of the struggle and strains involved in the pursuit of self-regulating market systems and the moves people make to construct more controlled markets. As I explained, the CBT model of ecotourism can be understood as more protectionist than the entrepreneurial model which is more compatible with neoliberal philosophies of free market competition, individual freedoms and private property. Despite the neoliberal ideal, managing conservation and livelihoods through ‘free’ market engagement in this way does not bring the greatest good to all community members, and the expansion of individual businesses runs contrary to the conservation goals of the park and to those of the ecotourism discourse itself. Many respondents expressed a desire to return to the CBT model of ecotourism and manage the business communally, ensuring surplus value is redistributed and invested in community projects such as road maintenance, conservation or youth programs. Feeling as though they cannot force entrepreneurs to return to a communally run project, however, many community members have begun appealing to ideas of a self-sufficient Karen identity to dissuade entrepreneurs from developing too quickly. In Northern Thailand, the ‘hill tribes’ and the rural agrarian lifestyle provide an exotic draw for tourists, and Karen ethnic minority members in particular are represented as self-sufficient and nature loving peoples with rich local wisdom in nature conservation (Walker, 2001). It has been argued that articulating particular self-sufficient or traditional indigenous identities can be politically effective in gaining rights to land and access to resources for indigenous peoples, but that this also often seriously restricts how these communities are able to live and develop (Li, 2000; Tsing, 1999; Walker, 2001). In these arguments, however, the communities and their allies have articulated collective indigenous identities in response to threats external to the community, or to receive support from governments or NGOs (Tsing, 1999). However, different people within each community have very different motivations for internalizing and articulating particular indigenous identities. In Ban Mae Klang Luang, several community members articulate and promote a self-sufficient, nature-loving Karen identity to resist and express their disapproval of the individualism and inequality that they perceive to be associated with entrepreneurship in ecotourism. In this case, villagers are articulating traditional Karen identities in response to internal threats produced through increased entrepreneurship and expansion of accommodations. Put differently, villagers are promoting a Karen-specific truth environmentality in resistance to the negative effects of the contradictions between the neoliberal and disciplinary environmentalities operating in the ecotourism project. As time goes on and ecotourism development continues, tensions between the community’s ideal vision of ‘Karen-ness’ and entrepreneurial ambitions are likely to intensify. Despite the critiques from social scientists, the neoliberalisation of conservation governance continues to proliferate in policy circles as the neoliberal ideal still implies that conservation and development interests can indeed be reconciled, and that development will benefit the community at large – a kind of ‘rising tides will raise all boats’ rhetoric. As Gibson-Graham explains, “Most theories of neoliberal rationality assume a certainty and a sufficiency that blind us to the potential failures or faltering moments of this new governmental technology” (2006: 4). The rationality behind the neoliberalisation of conservation governance has certainly been critiqued in academic literature, but market-based interventions will remain popular with policy makers without empirical data that details the contradictions and the challenges of incorporating market logics in conservation (Roth and Dressler, 2012). This research therefore contributes to these debates by demonstrating the messy, ironic and contradictory ways that markets in conservation zones are embraced and contested through local on-the-ground engagements. The internal contradiction in encouraging both disciplinary and neoliberal environmentalities calls the long-term viability of ecotourism as a neoliberal conservation strategy into question.