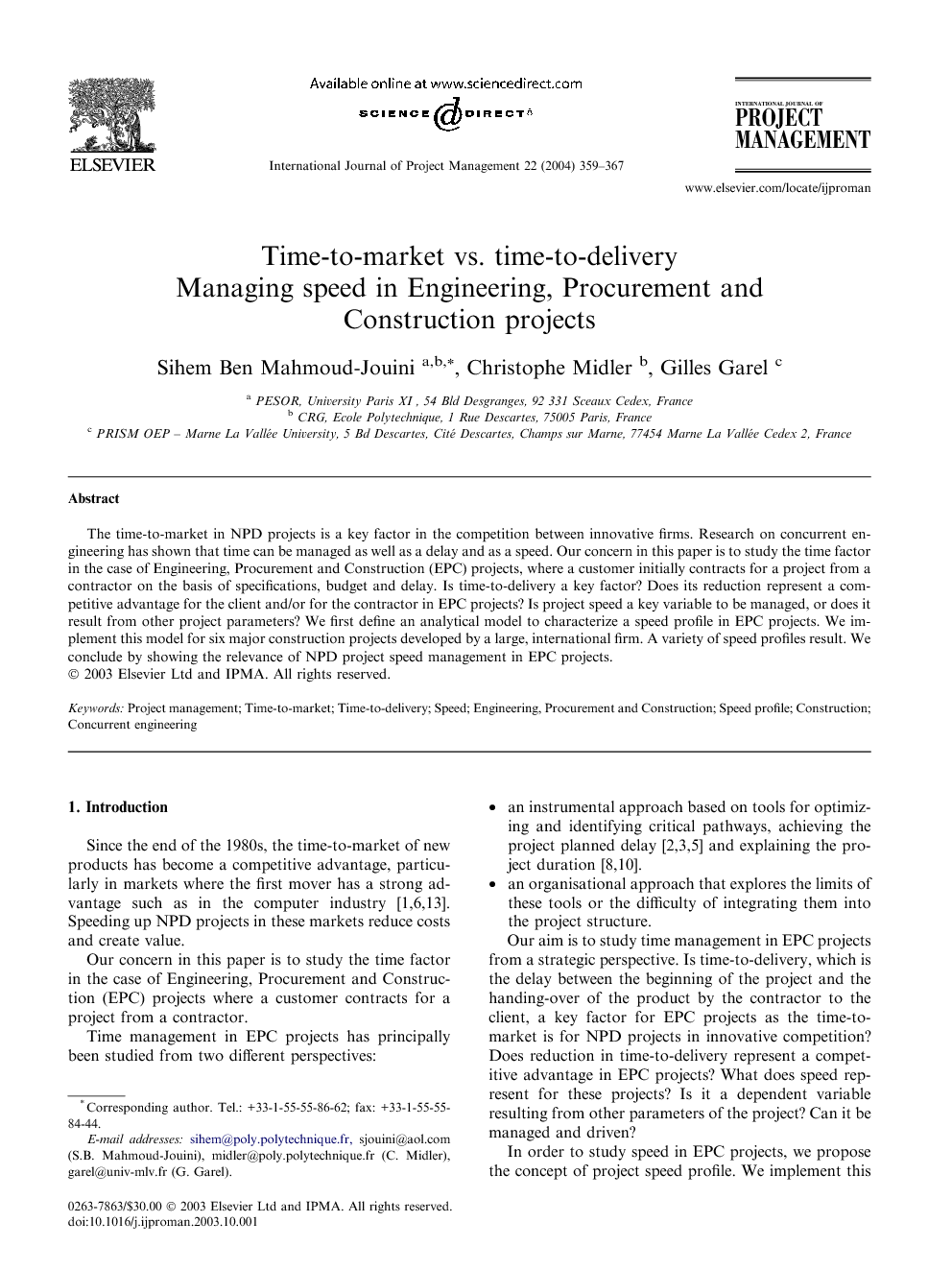 The time-to-market in NPD projects is a key factor in the competition between innovative firms. Research on concurrent engineering has shown that time can be managed as well as a delay and as a speed. Our concern in this paper is to study the time factor in the case of Engineering, Procurement and Construction (EPC) projects, where a customer initially contracts for a project from a contractor on the basis of specifications, budget and delay. Is time-to-delivery a key factor? Does its reduction represent a competitive advantage for the client and/or for the contractor in EPC projects? Is project speed a key variable to be managed, or does it result from other project parameters? We first define an analytical model to characterize a speed profile in EPC projects. We implement this model for six major construction projects developed by a large, international firm. A variety of speed profiles result. We conclude by showing the relevance of NPD project speed management in EPC projects.

Since the end of the 1980s, the time-to-market of new products has become a competitive advantage, particularly in markets where the first mover has a strong advantage such as in the computer industry [1], [6] and [13]. Speeding up NPD projects in these markets reduce costs and create value. Our concern in this paper is to study the time factor in the case of Engineering, Procurement and Construction (EPC) projects where a customer contracts for a project from a contractor. Time management in EPC projects has principally been studied from two different perspectives: • an instrumental approach based on tools for optimizing and identifying critical pathways, achieving the project planned delay [2], [3] and [5] and explaining the project duration [8] and [10]. • an organisational approach that explores the limits of these tools or the difficulty of integrating them into the project structure. Our aim is to study time management in EPC projects from a strategic perspective. Is time-to-delivery, which is the delay between the beginning of the project and the handing-over of the product by the contractor to the client, a key factor for EPC projects as the time-to-market is for NPD projects in innovative competition? Does reduction in time-to-delivery represent a competitive advantage in EPC projects? What does speed represent for these projects? Is it a dependent variable resulting from other parameters of the project? Can it be managed and driven? In order to study speed in EPC projects, we propose the concept of project speed profile. We implement this concept for six major construction projects developed by a large, international contractor.1 The criteria for choosing these projects were that they had to cover a variety of situations based on the following variables: type of work (building, road construction, etc.), type of contract (fixed price, unit price, incentive clauses, etc.), composition of the group in charge of the project (foreign partners, joint venture, etc.) and location of the project (domestic or international). In each case, a case study was drawn up and approved by the project participants. These case studies were based on an analysis of existing documentation, visits and interviews with a wide variety of those involved in the project at different hierarchical levels (project chief, design engineer, works clerk, general foreman, etc.) and in different organizations (customers, project manager, construction firm, etc.) (see Table 1). Table 1. Main characteristics of the studied projects Project type Duration Place Object of the contract – type of contract Amount of contract Construction of a railroad tunnel and bridge 26 months England Construction work £100 million 22 months Cost + fee contract Construction of two office buildings 16 months France Construction work 30 million Fixed price Construction of civil engineering work on a highway 24 months France Construction work 10 million Unit price contract Construction of four tunnels for extending a subway line 46 months Hong Kong Design and build 87 million Fixed price Construction of a suspension bridge 24 months design Greece Fixed price 585 million 60 months work Build operate and transfer Construction of an underwater tunnel 60 months Northern Europe Construction work 2 billion Table options The projects analysis shows that a firm can manage project speed by choosing a planned speed profile at the preparation stage of the project, and by driving an effective profile speed, which may differ from the planned one. The planned speed profile is chosen according to the strategy of the firm concerning the speed management. The effective profile is driven according to the terms of the contract, to the relationship between the customer and to the contractor and/or the importance of the time-to-delivery factor for them. We conclude by discussing the relevance of the NPD speeding up model in the case of EPC projects.

The management of time in the projects was studied primarily for NPD projects from a time-to-market reduction perspective. Our goal in this paper was to promote greater understanding of project management by filling a gap concerning the management of time in EPC projects from a time-to-delivery perspective. We have shown how the concurrent engineering model reduces time-to-market and speeds NPD projects. We discussed the importance of the time-to-delivery reduction for the customer and for the contractor. We showed that in EPC projects, customers can consider time as a resource and, in that case, they will encourage the contractor to reduce the project duration. But if they are not interested in early delivery, the contractor will generally go with the achievement of the delay fixed in the contract, reaping profit by controlling costs, particularly in the case of a required reorganization of the project. The reputation of the contractor consists of his ability to respect the time-to-delivery and to satisfy the customer when he asks to speed up some phases. Based on an analysis of six projects, we distinguish different phases in a project : preparation, learning, on-going and back-up, each having its own speed. These phases represent the global speed profile concept. The firm chooses a planned speed profile before the start of the project and then drives the effective speed profile according the planned one or in a different way in order to latch on the opportunities and react to surprises. Managing speed is choosing a planned profile corresponding to the speed strategy of the firm and then driving the course of the different phases and their connection. We characterized three types of contrasting planned profiles: the industrial, the empirical and the back-up one, and four speed effective profiles : the accelerating, the difficult start-up with controlled convergence and late one, and the permanent catch-up. This depiction of the variety of possible speed profiles normally falls apart with general, over-simplified observations that treat speed as the simple result of other project dimensions. In contrast, our paper aims to show that, in EPC projects, time can be considered a resource and speed can be managed. The goal in this paper was to remain within the framework of a structural analysis. In further research, a subsequent causal analysis might consider the contractor's ability to manage the planned and effective speed profiles. We could distinguish external aspects, such as relationships with the customer or the environment of the project, and internal ones, such as composition of the team, learning from past projects, product and process integration. Subsequent research, which is already under way, will answer the following questions: • How can project supervisors be trained in order to handle these aspects? • How can lessons on good speed management practices be shared? • How promote the development of partnership practices which seems to be the cornerstone for effective speed management?