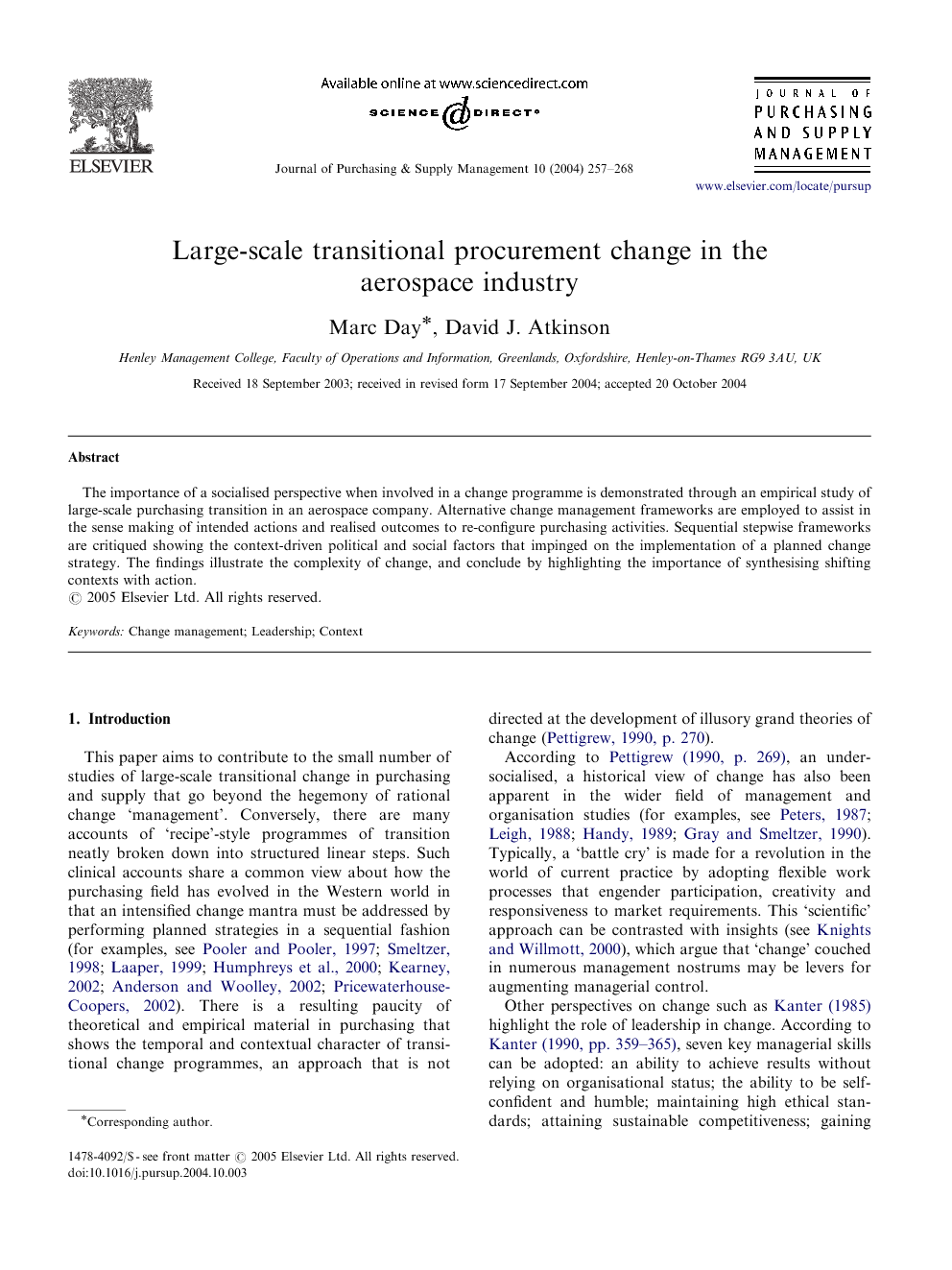 The importance of a socialised perspective when involved in a change programme is demonstrated through an empirical study of large-scale purchasing transition in an aerospace company. Alternative change management frameworks are employed to assist in the sense making of intended actions and realised outcomes to re-configure purchasing activities. Sequential stepwise frameworks are critiqued showing the context-driven political and social factors that impinged on the implementation of a planned change strategy. The findings illustrate the complexity of change, and conclude by highlighting the importance of synthesising shifting contexts with action.

This paper aims to contribute to the small number of studies of large-scale transitional change in purchasing and supply that go beyond the hegemony of rational change ‘management’. Conversely, there are many accounts of ‘recipe’-style programmes of transition neatly broken down into structured linear steps. Such clinical accounts share a common view about how the purchasing field has evolved in the Western world in that an intensified change mantra must be addressed by performing planned strategies in a sequential fashion (for examples, see Pooler and Pooler, 1997; Smeltzer, 1998; Laaper, 1999; Humphreys et al., 2000; Kearney, 2002; Anderson and Woolley, 2002; PricewaterhouseCoopers, 2002). There is a resulting paucity of theoretical and empirical material in purchasing that shows the temporal and contextual character of transitional change programmes, an approach that is not directed at the development of illusory grand theories of change (Pettigrew, 1990, p. 270). According to Pettigrew (1990, p. 269), an undersocialised, a historical view of change has also been apparent in the wider field of management and organisation studies (for examples, see Peters, 1987; Leigh, 1988; Handy, 1989; Gray and Smeltzer, 1990). Typically, a ‘battle cry’ is made for a revolution in the world of current practice by adopting flexible work processes that engender participation, creativity and responsiveness to market requirements. This ‘scientific’ approach can be contrasted with insights (see Knights and Willmott, 2000), which argue that ‘change’ couched in numerous management nostrums may be levers for augmenting managerial control. Other perspectives on change such as Kanter (1985) highlight the role of leadership in change. According to Kanter (1990, pp. 359–365), seven key managerial skills can be adopted: an ability to achieve results without relying on organisational status; the ability to be self-confident and humble; maintaining high ethical standards; attaining sustainable competitiveness; gaining satisfaction from holistic results rather than just financial targets; to be able to work across functions to find synergies; and the need to be aware of the process, as well as the outcomes of change. However, the prime necessity for change and so-called ‘n’ step processes ( Collins, 1998) has been questioned for being undersocialised and poorly context aware ( Burnes, 1996). Whilst there are numerous models of change available for structuring the process of organisational change ( Lawrence and Lorsch, 1967; Greiner, 1972; Doz and Prahalad, 1987), few adopt a level of sophistication beyond that of Lewin (1951). According to Dawson (1994), the common flaw across models based on Lewin (1951) is that they do not share a definition of change as a complex and dynamic process which should not be wholly solidified. This paper will relay the findings from a longitudinal company study of the aerospace industrial sector (the company will be referred to under the pseudonym Keele Aero). The data will show change as a complex, multi-factor phenomena. It will show how managers responded to the issues that developed from implementing a strategy that, after observation in context, was a complex mix of planned and emergent action. The large-scale transitions at Keele Aero relate to a fundamental change in the organisation and control of working practices in the purchasing function of the firm. In undertaking such a large re-examination of purchasing organisation, staff at Keele Aero adapted a framework for temporal sense making based on Kotter (1996). Although critiqued as an ‘n’ step model, it provided a communications medium and insight into how the operation of new practices and procedures were introduced. Rather than being used as a ‘recipe’, the eight stages of Kotter's framework acted as a retrospective temporal marker for engendering reflexivity about a complex, non-linear and ‘black box’ process ( Dawson, 1994, p. 37). This paper will conclude by arguing that ‘n’ step theories (or ideologies of management) for change give the illusion that transition is a straightforward, ‘painless’ project management process that can be negotiated without recourse to reflexive evaluation ( Collins, 1998). We show that being reflexive about transitions in procurement can assist the practitioner in navigating emergent change episodes that may seem counterproductive to the initial planned trajectory of transformation.

Although there is still debate in the management and organisation literature about the nature of change being a quantum versus incremental process (see Miller and Friesen, 1980; Quinn, 1982), it appears that Keele Aero's transition during the time of data collection was a handful of quantum leaps supported by incremental steps. If we take Burns and Stalker's (1961) mechanistic and organic structures of organisation, then the archetype that most closely matched Keele Aero was that of a mechanistic organisation. Keele Aero was characterised by a sharp differentiation of task specialisation, with standards and processes in procurement becoming increasingly standardised. This was coupled with an authority structure that was hierarchical in nature, with the locus of supplier competence at the top of the organisation. This can be contrasted with the management systems of the ‘guiding coalition’, where conflict was resolved mainly through interaction, with patterns of authority based on common commitment and communication. This was based on an underlying loyalty between the team members that was project based with prestige arising from personal contribution. This more organic form of management system created inherent tensions between both structures, and resulted in frustrations on both sides as the high-profile Procurement Transformation programme was rolled out. It appears that the procurement function within Keele Aero had hit what Mintzberg (1989) would describe as a ‘periodic bump’, an occasional period of revolution that punctuates a longer spell of stability. Miller and Friesen (1984) provide theoretical triangulation for the processes witnessed at Keele Aero where they argue that quantum change means changing many elements concurrently. This was the case indeed at the company, as a number of factors (the recognition of procurement's growing expenditure impact, the perceived importance of relational competence and the commercial advantages from controlling bought-in costs) had led a shared view by stakeholders outside of procurement that organisational configuration had fallen out of synchronisation with its environment. This complex picture of stability punctuated by evolution gave rise to questions about the usefulness of the more simplistic views of ‘n’ step change. Although Kotter's (1996) approach allowed the team to distil some practical dimensions to share with colleagues, and use the eight steps as a way to reflect on events, more analytical insight was difficult to pursue. This stunted the team's ability to achieve a greater degree of evaluative insight into change. Change is a challenge most individual, groups and organisations face and it may be the case that this is even more important a priority for those practicing in maturing markets. Driving value from supply relationships in such circumstances requires more than a ‘toolbox’ of technical purchasing skills, the use of an ‘n’ step guide for change, or the deployment of external consultants to implement some form of planned sourcing schema. This study demonstrates that it requires a mix of contextual clarity, leadership competence and a personal resilience to see changes through to the point where they become ‘just the way we do things around here’ ( Bower, 1966). A critical aspect of change in any circumstance also requires the adoption of a learning approach to inter-organisational development to support the efforts of those charged with ‘leading’ change ( Carnall, 1999; Bessant et al., 2003). However, the precise nature of the connections between different periods of change are, we argue, dependent on organisational circumstances that are contingent on the structure, environment and nature of relationships between actors. This makes ‘recipe’ approaches of limited use over and above the raising of personal awareness about the range of factors that are to be considered throughout a change programme, or as the core framework of communication for a guiding coalition who wish to promote change. The transitional change programme at Keele Aero realised significant improvements during the data collection period, albeit with a series of ‘non-planned’ events that shaped a curved rather than straight pathway between intended objectives and realised outcomes. From a position where procurement held little managerial control over key supplier relationships, it established itself as the lead in all those relationships, greatly enhancing its standing within the company and its influence over the supply chain. In Keele Aero's case, it was clearly evident that a critical juncture had been reached which demanded improvements. It was the general realisation of such a situation that was the catalyst for a first collective sense of urgency. It is argued that change would have been much more difficult to effect without this shared imperative.