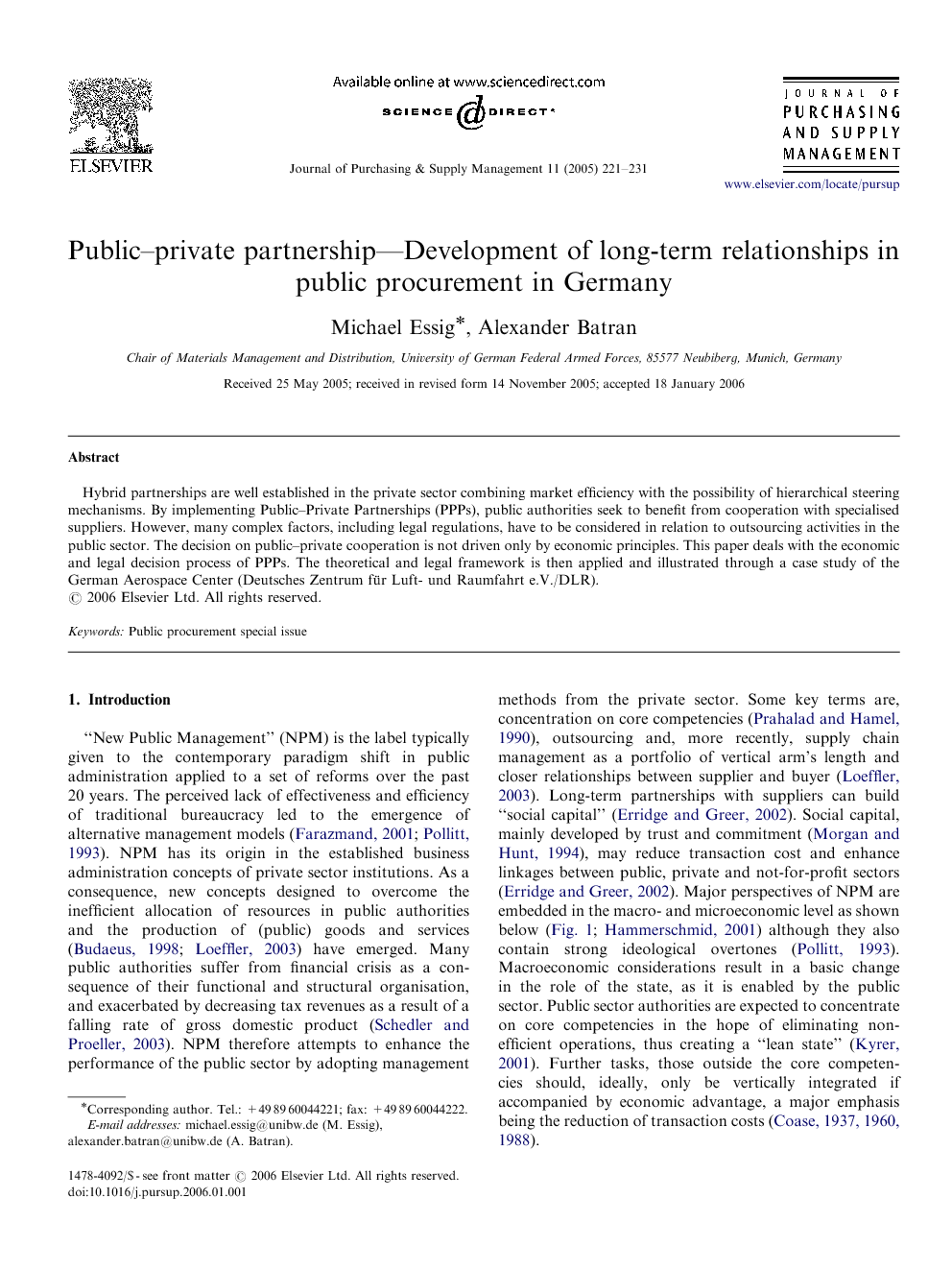 Hybrid partnerships are well established in the private sector combining market efficiency with the possibility of hierarchical steering mechanisms. By implementing Public–Private Partnerships (PPPs), public authorities seek to benefit from cooperation with specialised suppliers. However, many complex factors, including legal regulations, have to be considered in relation to outsourcing activities in the public sector. The decision on public–private cooperation is not driven only by economic principles. This paper deals with the economic and legal decision process of PPPs. The theoretical and legal framework is then applied and illustrated through a case study of the German Aerospace Center (Deutsches Zentrum für Luft- und Raumfahrt e.V./DLR).

“New Public Management” (NPM) is the label typically given to the contemporary paradigm shift in public administration applied to a set of reforms over the past 20 years. The perceived lack of effectiveness and efficiency of traditional bureaucracy led to the emergence of alternative management models (Farazmand, 2001; Pollitt, 1993). NPM has its origin in the established business administration concepts of private sector institutions. As a consequence, new concepts designed to overcome the inefficient allocation of resources in public authorities and the production of (public) goods and services (Budaeus, 1998; Loeffler, 2003) have emerged. Many public authorities suffer from financial crisis as a consequence of their functional and structural organisation, and exacerbated by decreasing tax revenues as a result of a falling rate of gross domestic product (Schedler and Proeller, 2003). NPM therefore attempts to enhance the performance of the public sector by adopting management methods from the private sector. Some key terms are, concentration on core competencies (Prahalad and Hamel, 1990), outsourcing and, more recently, supply chain management as a portfolio of vertical arm's length and closer relationships between supplier and buyer (Loeffler, 2003). Long-term partnerships with suppliers can build “social capital” (Erridge and Greer, 2002). Social capital, mainly developed by trust and commitment (Morgan and Hunt, 1994), may reduce transaction cost and enhance linkages between public, private and not-for-profit sectors (Erridge and Greer, 2002). Major perspectives of NPM are embedded in the macro- and microeconomic level as shown below (Fig. 1; Hammerschmid, 2001) although they also contain strong ideological overtones (Pollitt, 1993). Macroeconomic considerations result in a basic change in the role of the state, as it is enabled by the public sector. Public sector authorities are expected to concentrate on core competencies in the hope of eliminating non-efficient operations, thus creating a “lean state” (Kyrer, 2001). Further tasks, those outside the core competencies should, ideally, only be vertically integrated if accompanied by economic advantage, a major emphasis being the reduction of transaction costs (Coase, 1937, Coase, 1960 and Coase, 1988). Full-size image (44 K) Fig. 1. Framework for new public management (Sources: Adapted from Hammerschmid, 2001; Budaeus, 1994). Figure options First, microeconomic reforms relate to the internal organisation of public authorities, in terms of deficits in bureaucratic governance leading to the implementation of revised management concepts and tools. In Germany, these new paradigms are known as “Neues Steuerungsmodell” and were developed by an association of local authorities named “Kommunale Gemeinschaftsstelle für Verwaltungsvereinfachung” (Local Authorities Association for Simplifying Public Administration; KGST). As many activities of “modern government” failed to meet the efficiency goals of NPM, a more fundamental, strategic approach was needed (Savas, 1987). Performance management with a strong focus on outcomes replaced the former input-oriented steering mechanism. Labour and management incentives were seemingly matched to enhanced output quality, and a customer service orientation provided citizens with a more transparent view of public organisations. Second, the external reform of public organisations intersects with the basic strategies arising from the macroeconomic view. A concentration on core competencies has become associated with decisions about outsourcing former public responsibilities as a consequence of the “lean state”. Public managers operating in this environment are simultaneously endeavouring to introduce managed competition and are contracting with the private sector to deliver public goods and services more efficiently and effectively (Savas, 2000; Hammerschmid, 2001) though this is not always achieved (Callender and Johnston, 2001). Contracting is a critical point of a continuum between market and the public sector hierarchy (vertical integration), now often dependent on outsourcing activities and, in specific situations, more innovative forms of public–private cooperation might be needed.

This study aims to compare conceptual and theoretical findings inherent in a typical public sector PPP-decision process, compared with the findings contained in a specific case in practice. Looking at the decision process at DLR, there was an economic demand for new solutions arising from the need for increased efficiency in the beginning. Founding a joint organisation brought considerations of strategic importance and specificity of ITS. In this case, strategic importance was more important than specificity, as responsibility for output must be guaranteed by public institutions. Overall, research activities are the core competence of DLR, and this output might be seen as a genuine public good. These basic research activities are often at such an early stage that economic success is not predictable and very uncertain, although incurring high costs. Nevertheless, as a public institution, DLR provides these activities. Private research activities on the other hand are mostly based on concrete products. As a result, government and its associated organisations (such as DLR) are in a position to provide research activities in the common interest (Gewaehrleistungsstaat), where pure private institutions would fail, since everyone tries to act as a “free rider”. Strongly connected with its core competence, DLR must also secure its ITS which are necessary sub-services to support research activities. For that reason the strategic importance of ITS evolves, and, with low to medium and high specificity, the requirement to choose a joint organisation as the PPP model becomes fairly clear. With only two major types of PPPs, we consolidated a lot of mostly empirically oriented PPP definitions which make a limited contribution to an economic and legal-based analysis. This case study is based on the national level in Germany. Hence, further investigations to close the gap should be based on the regional and local levels. For example, at the regional “Laender” or state-level outsourcing of police clothing production and administration to a PPP could be achieved. Police uniforms have very high specificity and special importance to ensure officers are identified as police. At the local level there are several examples of cooperation between municipalities and private companies for energy supply, waste disposal, public baths and hospitals. A further question might be whether PPPs are the first step towards a complete restructuring of public services. Within EU public procurement regulations, there is now a new instrument called “competitive dialogue” which allows the integration of suppliers at a very early stage of purchasing procedure and as a result the implementation of supplier relationship concepts (Erridge and Greer, 2002). Public Procurement also moves towards Public Supply Chain Management (Fig. 5), and, taking into account that PPPs offer changes in the “role” of the public sector, the whole public value chain comes into an NPM focus. Public Supply Chain Management is a possible development route for public procurement. Networks are traditionally much more common to the public sector, especially in the state structures, where coordination of efforts on different levels of politics are required. Full-size image (59 K) Fig. 5. Public supply chain management. Figure options Economic analysis proceeds at network levels of administration, public companies and also private companies that need to implement differentiated management structures. Management is more difficult, with competing priorities which cannot be balanced completely. Compared with the characteristic private sector commercial focus, public procurement is determined by regulatory requirements and socio-economic responsibilities (Erridge and McIlroy, 2002). The politics network at the top level, followed by the administration network level that takes responsibility for the execution of policies, occurs at the federal, state and local (municipality) level. As the results of this paper show, execution might also be carried out by private sector companies constituting a private supply chain but fulfilling the needs of the public supply chain. However, coordination is more complicated as not only legal and economic aspects have to be considered, but also the demands and needs of society.