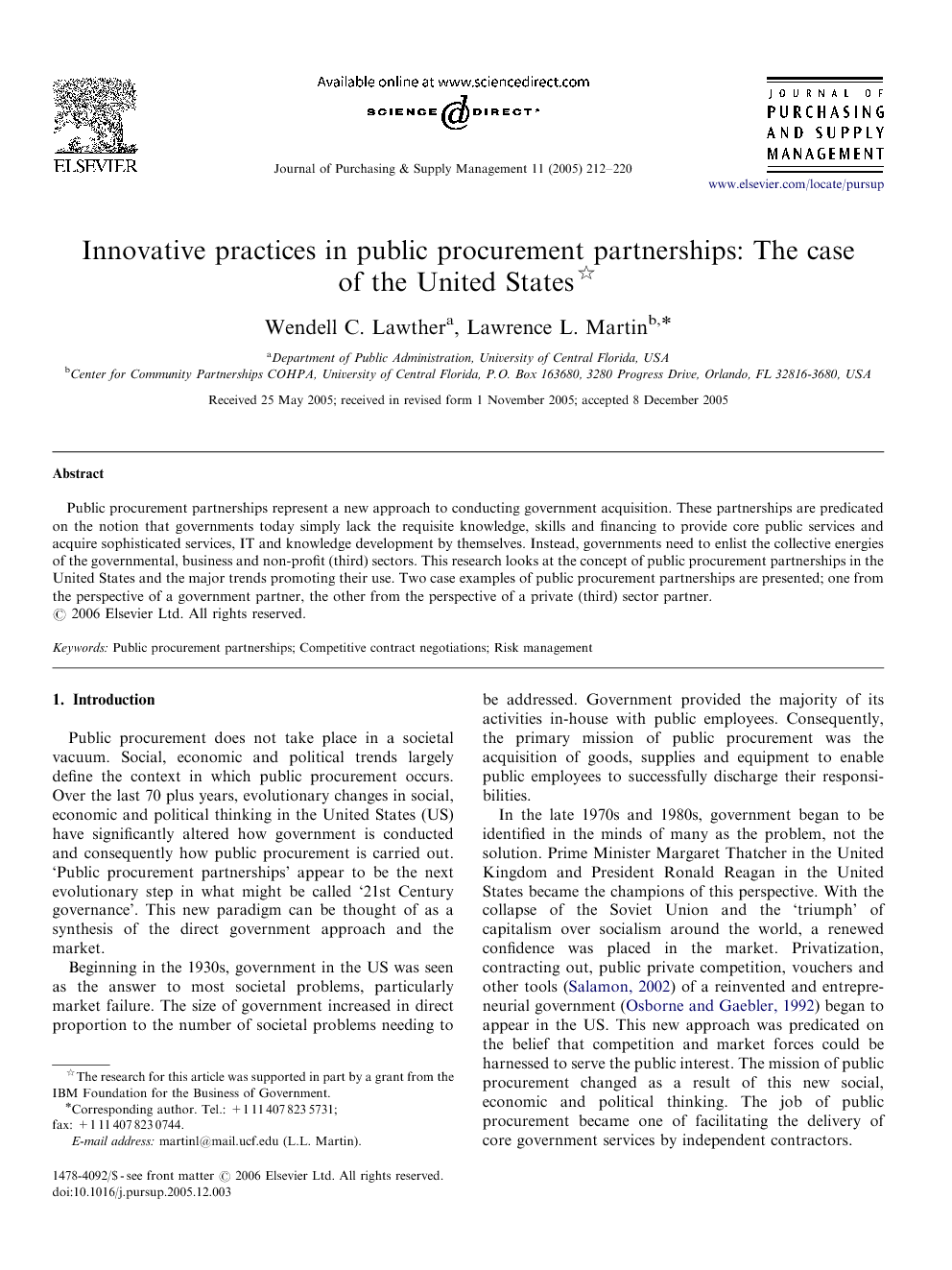 Public procurement does not take place in a societal vacuum. Social, economic and political trends largely define the context in which public procurement occurs. Over the last 70 plus years, evolutionary changes in social, economic and political thinking in the United States (US) have significantly altered how government is conducted and consequently how public procurement is carried out. ‘Public procurement partnerships’ appear to be the next evolutionary step in what might be called ‘21st Century governance’. This new paradigm can be thought of as a synthesis of the direct government approach and the market. Beginning in the 1930s, government in the US was seen as the answer to most societal problems, particularly market failure. The size of government increased in direct proportion to the number of societal problems needing to be addressed. Government provided the majority of its activities in-house with public employees. Consequently, the primary mission of public procurement was the acquisition of goods, supplies and equipment to enable public employees to successfully discharge their responsibilities. In the late 1970s and 1980s, government began to be identified in the minds of many as the problem, not the solution. Prime Minister Margaret Thatcher in the United Kingdom and President Ronald Reagan in the United States became the champions of this perspective. With the collapse of the Soviet Union and the ‘triumph’ of capitalism over socialism around the world, a renewed confidence was placed in the market. Privatization, contracting out, public private competition, vouchers and other tools (Salamon, 2002) of a reinvented and entrepreneurial government (Osborne and Gaebler, 1992) began to appear in the US. This new approach was predicated on the belief that competition and market forces could be harnessed to serve the public interest. The mission of public procurement changed as a result of this new social, economic and political thinking. The job of public procurement became one of facilitating the delivery of core government services by independent contractors. The business excesses of the 1990s (e. g. Worldcom and Enron) led to a questioning of the newfound trust that US citizens had placed in competition and market forces. This reevaluation led to yet another social, economic and political reappraisal and to an uncomfortable realization: if government was not the solution and if the market was not the solution, then what was the solution? With the advent of the 21st Century, a new paradigm began to appear in the US. In this new paradigm, public procurement is being encouraged to abandon its traditional ways of doing business and to move towards more ‘relationship contracting’ ( Lawther, 2003a; Welch, 2003). The age-old focus on the process of buying, it is said, should shift to concentrate more on the goals of the acquisition ( Kelman, 2004). The new paradigm goes by many names: collaboration, networks, strategic alliances, partnerships, and others (Agranoff, 2003; Gribben et al., 2001; Salamon, 2002; Bailey and Kooney, 2000). However, the concept of governing by network ( Goldsmith and Eggers, 2004) arguably best captures the essence of this new paradigm. What these terms, and the concepts they represent, all share in common is a search for a middle ground between government and the market. This new paradigm is predicated on the belief that the world has become too complex, too interdependent and too risky for governments to rely solely on the market or themselves to provide core public services and address social problems. In the words of the Copenhagen Centre ( Schested, 2003, p. 89), no single actor, public or private, has the all-encompassing knowledge, overview, information or resources to solve complex and diversified problems. The new paradigm argues that what is needed for effective 21st Century governance is a non-competitive form of cooperative interaction between government, business and the nonprofit (or third) sector designed to combine and harness the collective energies and expertise of all three sectors (e.g. Salamon, 2002; Gribben et al., 2001). The inclusion of the non-profit (third) sector incorporates into the new paradigm the ‘civil society’ and ‘social capital’ schools of thought which are predicated upon similar assumptions (e.g. Martin, 2005; Robinson, 1997). This article attempts to add to the knowledge base about the various means by which the public, private, and nonprofit sectors can work together through the use of public procurement partnerships. First, we provide a detailed discussion concerning the nature of public procurement partnerships, contrasting them with traditional government procurement and contracting approaches. Second, partnerships, we argue, are becoming increasingly necessary as public procurement and contracting become more complex and risky. The arrow of causality here is bi-directional. Complexity begets risk and risk begets complexity. Third, we suggest that the high levels of complexity and risk in public procurement and contracting today have changed how the public and private sectors must interact. We see an approach predicated on a partnership relationship between the public and private as perhaps the only viable solution. Finally, we provide two case examples that illustrate how governments in one state, Florida, are using public procurement partnership to advance the goals of their organizations while boldly addressing the issues of complexity and risk.