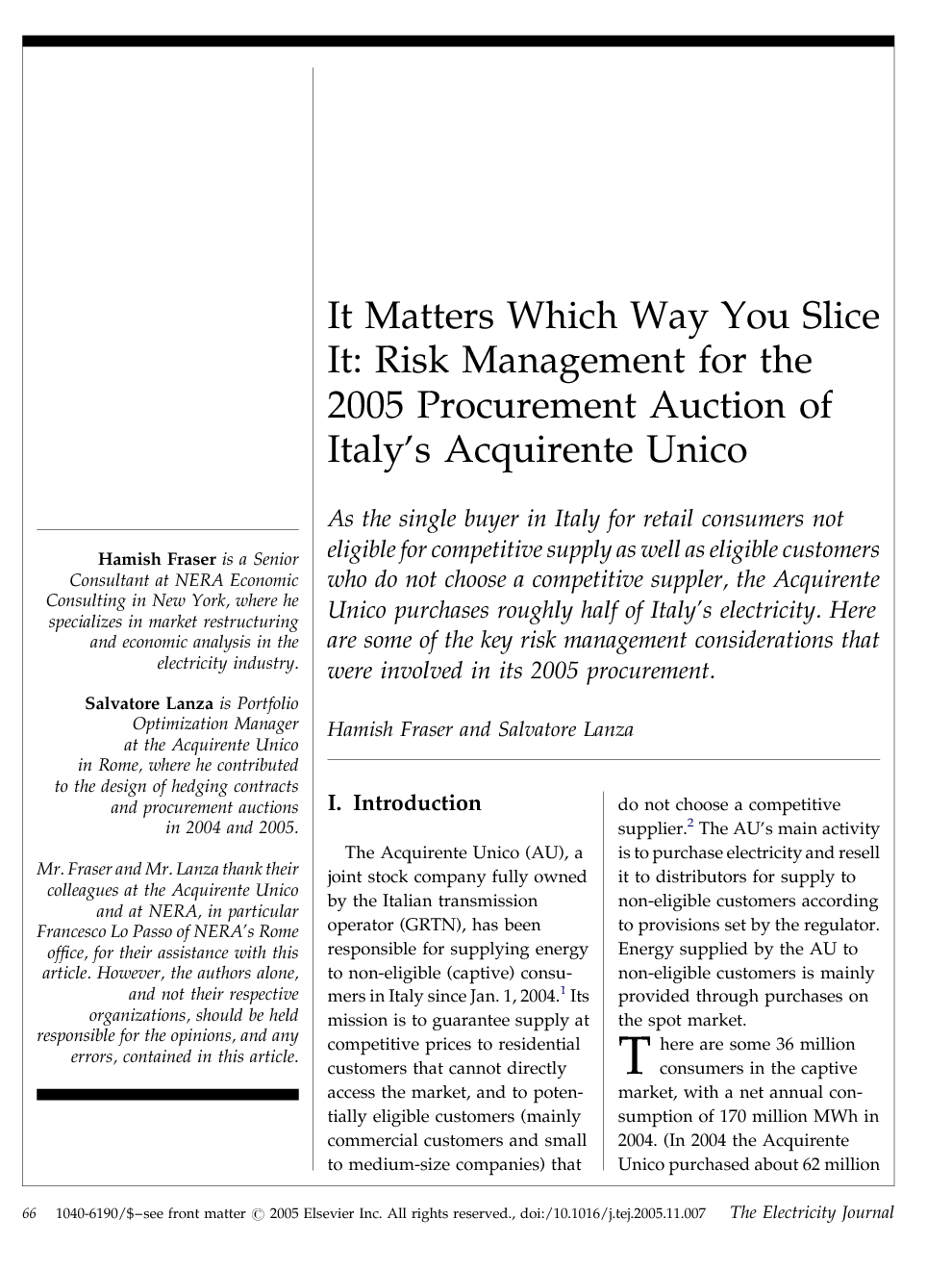 The Acquirente Unico (AU), a joint stock company fully owned by the Italian transmission operator (GRTN), has been responsible for supplying energy to non-eligible (captive) consumers in Italy since Jan. 1, 2004.1 Its mission is to guarantee supply at competitive prices to residential customers that cannot directly access the market, and to potentially eligible customers (mainly commercial customers and small to medium-size companies) that do not choose a competitive supplier.2 The AU's main activity is to purchase electricity and resell it to distributors for supply to non-eligible customers according to provisions set by the regulator. Energy supplied by the AU to non-eligible customers is mainly provided through purchases on the spot market.

There are some 36 million consumers in the captive market, with a net annual consumption of 170 million MWh in 2004. (In 2004 the Acquirente Unico purchased about 62 million MWh on the spot market, from April to December.) In 2005, consumption was expected to come to 166 million MWh, representing 50 percent of total electricity consumption in Italy. The AU is the largest operator in the Italian Power Exchange (IPEX), where about two-thirds of total Italian electricity consumption is traded. In order to provide electricity to captive customers, distribution companies must purchase electricity only via the AU, according to regulatory directives. The AU's selling prices are defined on a monthly basis, taking into account the average purchasing cost, including hedging costs, in order to assure the economic stability of the AU. Eligible customers supplied by the AU can switch to a competitive supplier upon very short notice. Migration is not easily predictable, so quantity risk is an important issue. Furthermore, the Italian electricity market is still strongly concentrated on the supply side.3 Market power is one of the main problems faced by the Italian Regulator and as a consequence hourly prices are not expected to be very volatile, but are steadily higher than marginal costs. Because of the volumes involved, hedging contracts between the AU and the largest producers are expected to influence prices on the IPEX. According to current regulation, the AU has to cover itself from both price and quantity risks for those quantities purchased on the electricity market.4 Within its electricity purchasing strategy for 2005, the AU asked NERA to assist in the development and implementation of mechanisms for risk-covering. The purpose of this article is to summarize some of the risk management considerations that were used as part of the 2005 purchasing strategy. The article will focus on that, rather than providing a detailed description of the process or a discussion of the overall economic, regulatory, and market concentration situation in Italy. In summary, the strategy developed was to purchase five types of one-way contracts for differences, each with a different strike price formula. The MW quantity of each type to purchase was a key consideration and a method based on multiple regression was used to determine contract quantities so as to minimize non-fuel uncertainty in the overall AU tariff. Section II of this article summarizes the decision to use one-way CfDs and Section III summarizes the decisions as to the number of CfDs, and the strike prices and quantities of each CfD. The outcome of the process described was an auction and subsequent negotiation for contracts with potential renewal through 2007. These contracts apply to purchases of electricity worth approximately Euro 20 billion.

A descending clock auction was chosen as the procurement process for the quantities determined, with a starting offer phase (during which bidders faced a predetermined strike price, and expressed for each product a quantity offer given a premium set by the AU) and an improving offer phase on those contracts with excess of supply. The ability of bidders to switch their offer among products during the improving offer phase allowed them to reveal their relative values of the contracts. The outcomes of the starting offer phase were an excess of supply for the “Coal” and “Gas1” products, a balance for the “Oil” product and an excess of demand for the “Gas2” and “Peak” products. Information obtained during this process induced the AU to not assign any contract in this initial phase and instead to organize another round on the basis of a modified initial premium for those products with excess of supply (lower premium) and excess of demand (higher premium). Bidders submitted sealed bid offers for 15,800 MW, which were assigned using a pay-as-bid mechanism. A residual quantity of 925 MW was assigned the following week. The Italian electricity market is still relatively young, and market concentration remains an issue. Against this background, the AU faces considerable challenges in its procurement of a large proportion of the electricity in Italy. Risk management is a critical function to the AU and the AU's risk management methods will evolve over time as the market evolves. The 2005 procurement process was an important milestone in this evolution. 1 Before the AU came into operation, supply to non-eligible customers was carried out by Enel, the former integrated monopolist. 2 From July 2007, all Italian electricity customers will be eligible. 3 About 80 percent of Italian electricity production comes from plants controlled by 6 operators (Enel 49.4 percent, Edison 12.3 percent, Edipower 7.6 percent, Endesa 6.4 percent, Tirreno Power 2.3 percent, EniPower 2 percent). Data provided by Italian Antitrust (Indagine conoscitiva sullo stato della liberalizzazione del settore dell’energia elettrica). 4 The AU can satisfy its demand with bilateral physical contracts (no more than 25 percent of its total load), imports, CIP6 (subsidized electricity produced by renewable sources) electricity purchases, and purchases on the electricity market. Purchases on the electricity market require the conclusion of contracts to cover from both price and quantity risks. Decree of the Ministry of Productive Activities, Dec. 19, 2003. 5 “Residual” means after import contracts, CIP6, and an allowance for physical bilateral contracts are taken into consideration. 6 In a descending clock auction there would be a unique auction starting strike price for each slice. That starting price might be based on a methodology used in 2004 in which the price was based on a measure of expected weighted average generation cost for all generators expected to run in that slice. 7 Even under the single CfD variant of Option 2, the AU's pre-existing contracts had a higher load factor, approaching 100 percent, meaning that the AU's residual load factor was quite low. 8 Excluding the effects of fuel price changes, for which the AU assumes risk.