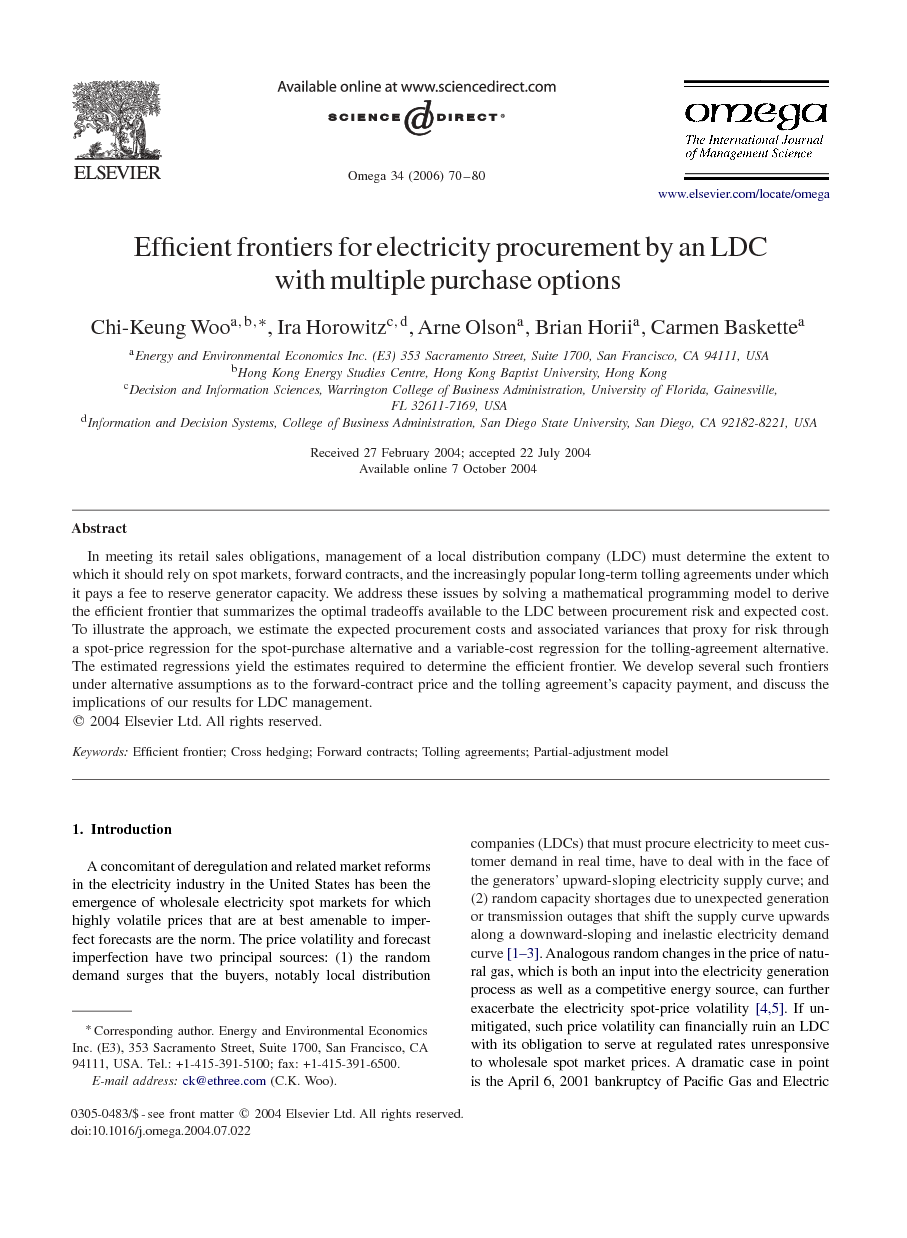 In meeting its retail sales obligations, management of a local distribution company (LDC) must determine the extent to which it should rely on spot markets, forward contracts, and the increasingly popular long-term tolling agreements under which it pays a fee to reserve generator capacity. We address these issues by solving a mathematical programming model to derive the efficient frontier that summarizes the optimal tradeoffs available to the LDC between procurement risk and expected cost. To illustrate the approach, we estimate the expected procurement costs and associated variances that proxy for risk through a spot-price regression for the spot-purchase alternative and a variable-cost regression for the tolling-agreement alternative. The estimated regressions yield the estimates required to determine the efficient frontier. We develop several such frontiers under alternative assumptions as to the forward-contract price and the tolling agreement's capacity payment, and discuss the implications of our results for LDC management.

A concomitant of deregulation and related market reforms in the electricity industry in the United States has been the emergence of wholesale electricity spot markets for which highly volatile prices that are at best amenable to imperfect forecasts are the norm. The price volatility and forecast imperfection have two principal sources: (1) the random demand surges that the buyers, notably local distribution companies (LDCs) that must procure electricity to meet customer demand in real time, have to deal with in the face of the generators' upward-sloping electricity supply curve; and (2) random capacity shortages due to unexpected generation or transmission outages that shift the supply curve upwards along a downward-sloping and inelastic electricity demand curve [1], [2] and [3]. Analogous random changes in the price of natural gas, which is both an input into the electricity generation process as well as a competitive energy source, can further exacerbate the electricity spot-price volatility [4] and [5]. If unmitigated, such price volatility can financially ruin an LDC with its obligation to serve at regulated rates unresponsive to wholesale spot market prices. A dramatic case in point is the April 6, 2001 bankruptcy of Pacific Gas and Electric Company (PG&E), one of the largest LDCs in the United States [6], [7], [8], [9] and [10]. Both state and federal governments now endorse the important role of risk management in the energy business [11] and [12]. Recent analyses of an LDC's management of electricity-procurement cost and risk have focused on two procurement alternatives: spot-market purchases and fixed-price forward-contract purchases [13], [14] and [15]. The latter facilitate risk management and mitigate potential market-power abuses by generators, because they reduce an LDC's dependence on the spot markets [16]. LDC management, however, may be reluctant to enter into a long-term forward contract if the LDC's regulator—and the industry remains subject to partial regulation—can engage in an after-the-fact prudence review that might result in full cost recovery being disallowed [9] and [17]. To be sure, legislative actions can minimize the need for and use of after-the-fact prudence reviews. For example, California Assembly Bill (AB) 57 that became law on September 25, 2002 directs “the Public Utilities Commission …… to review each electrical corporation's procurement plan in a manner that assures creation of a diversified procurement portfolio, assures just and reasonable electricity rates, provides certainty to the electrical corporation in order to enhance its financial stability and creditworthiness, and eliminates the need, with certain exceptions, for after-the-fact reasonableness reviews of an electrical corporation's prospective electricity procurement performed consistent with an approved procurement plan” (Section 1(c)). On October 24, 2002, the California Public Utilities Commission (CPUC) issued Decision 02-10-062, which implements AB57. The Decision requires the three large utilities, PG&E, Southern California Edison (SCE) and San Diego Gas and Electric (SDGE), to submit procurement plans for the CPUC's approval. A critical element of such plans is the choice among alternative electricity-procurement options. That is, in meeting its down-the-road electricity requirements: to what extent should the LDC rely on spot markets? To what extent should it rely on forward contracts? And to what extent should it rely on the increasingly popular long-term tolling agreements under which the LDC pays a generator a fee to, in effect, reserve some of the generator's capacity? We address these issues by first solving the mathematical programming model from which one derives the efficient frontier that summarizes the optimal tradeoffs available to LDC management between procurement risk and expected cost, when it can diversify its electricity purchases through electricity spot markets, fixed-price forward contracts, and tolling agreements. We then put empirical meat on these theoretical bones via an application in which we estimate expected procurement costs and the associated variances that proxy for risk. The estimation entails a spot-price regression for the spot-purchase alternative and a variable-cost regression for the tolling-agreement alternative. The estimated regressions yield the parameter estimates required to determine the efficient frontier. We develop several such frontiers under alternative assumptions as to the forward-contract price and the tolling agreement's capacity payment, and discuss the implications of our results for LDC management.

Efficient frontiers have had steady employment as visually appealing and analytically useful decision-making aids in a variety of multi-objective settings in which management has to evaluate and choose among alternatives for which there are tradeoffs among those objectives. Those settings extend well beyond mean-variance financial portfolio analysis [22] to hospitals [43] and [44], mutual fund performance appraisal [45], managerial performance assessment [46], regional development [47], marketing [48], and production [49]. Management of an LDC that must procure electricity to meet customer demand in real time must also evaluate and choose among alternatives for which there are tradeoffs, in this case between expected procurement cost and risk. In this novel setting, too, the efficient frontier is a visually appealing and analytically useful decision-making aid. Developing the frontier, however, is a rather complex proposition that involves determining the optimal blend of three sources of electricity: the spot market, electricity forward contracts, and tolling agreements with generators. Optimality in this context implies the blend that provides the minimum variance for a given expected procurement cost. The frontier then traces out the tradeoffs that are available to management between cost and risk. Those tradeoffs depend upon the price of electricity forwards and the capacity payment in the tolling agreement. Estimating the parameters that are required for assessing the expected costs and variances is also a rather complex proposition. The complexities notwithstanding, this paper has shown how to both estimate the parameters and develop the frontier, and how management can determine its most preferred alternative on that frontier, given the tradeoffs that it is willing to accept between cost and risk. Moreover, the paper has also shown that all of this is eminently doable and immediately applicable. Thus, while one can hope that neither California nor any other region will ever again confront an energy crisis of the sort that plagued the state and punished end-users and LDCs alike from May 2000 to June 2001, it is our further hope that by implementing the efficient-frontier approach management will not only be dealing with short-term and unavoidable spot-price volatility in a prudent fashion, but will also be mitigating the impact of any future crisis on both the company and its customers.