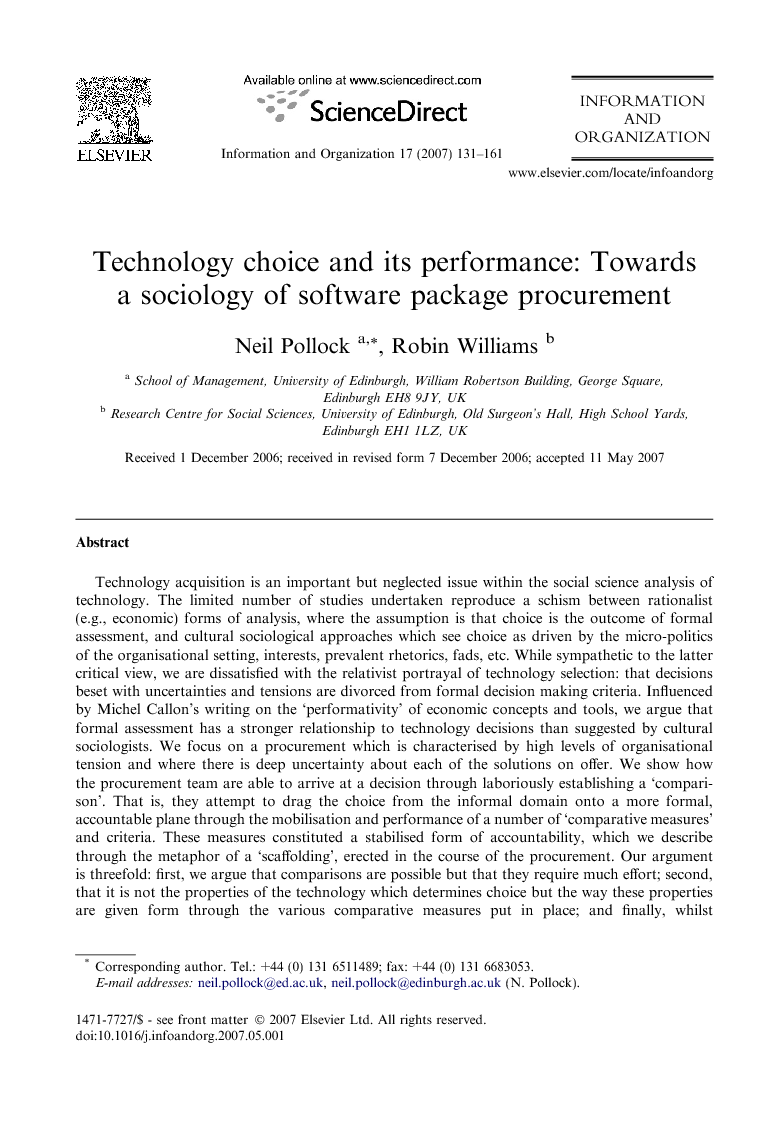 Technology acquisition is an important but neglected issue within the social science analysis of technology. The limited number of studies undertaken reproduce a schism between rationalist (e.g., economic) forms of analysis, where the assumption is that choice is the outcome of formal assessment, and cultural sociological approaches which see choice as driven by the micro-politics of the organisational setting, interests, prevalent rhetorics, fads, etc. While sympathetic to the latter critical view, we are dissatisfied with the relativist portrayal of technology selection: that decisions beset with uncertainties and tensions are divorced from formal decision making criteria. Influenced by Michel Callon’s writing on the ‘performativity’ of economic concepts and tools, we argue that formal assessment has a stronger relationship to technology decisions than suggested by cultural sociologists. We focus on a procurement which is characterised by high levels of organisational tension and where there is deep uncertainty about each of the solutions on offer. We show how the procurement team are able to arrive at a decision through laboriously establishing a ‘comparison’. That is, they attempt to drag the choice from the informal domain onto a more formal, accountable plane through the mobilisation and performance of a number of ‘comparative measures’ and criteria. These measures constituted a stabilised form of accountability, which we describe through the metaphor of a ‘scaffolding’, erected in the course of the procurement. Our argument is threefold: first, we argue that comparisons are possible but that they require much effort; second, that it is not the properties of the technology which determines choice but the way these properties are given form through the various comparative measures put in place; and finally, whilst comparative measures might be imposed by one group upon others in a procurement team, these measures remain relatively malleable.

As with many topics in the social sciences the debate surrounding the choice and purchase of technologies is polarised across a number of incommensurable positions. A major line of argument has been between, on the one hand, technocratic analyses advanced, for example, by economics, management and engineering accounts, where the assumption is that sufficient information is available about the properties of artefacts to enable rational choice to be made, and, on the other, more sociological and critical approaches which emphasise the profound uncertainties surrounding procurement, the consequent contestability of claims about the properties of technology, and the ‘negotiability’ of the criteria used to assess objects. In this latter view, choice of one technology over another is seen to reside not in the objective properties of the artefact as revealed by a formal technical or economic assessment but to be, of necessity, refracted through or, in some accounts, driven by the micro-politics of the organisation, the commitments of the various actors, prevalent rhetorics, fads, etc (Grint and Woolgar, 1997 and Neyland and Woolgar, 2002). While sympathetic with the critical account, we are dissatisfied with the relativist outcome and portrayal of technology selection as divorced from formal decision making criteria, particularly when it seems to us that procurement is subject to powerful, albeit complex, rationales. In contrast, we suggest that the formal assessment criteria adopted guide and transform the technology selection process. Our thinking is influenced by the work of those scholars who have become sensitive to the interrelationship between these two positions. In particular the work of Callon, 1998, Callon, 1999, Callon and Muniesa, 2005, MacKenzie, 1992 and MacKenzie, 2005 which has examined the contrasting explanations that economists and sociologists offer for the functioning of economic and financial markets. They both suggest that the gulf that exists between these two viewpoints is unhelpful. MacKenzie (1992) raised the idea that these disciplines offer tools with different kinds of explanatory power. Economic tools he suggests are well-honed for assessing the aggregate outcomes of highly regularised behaviour; where there are more or less formal criteria in play. Sociological tools (and here he refers to contemporary actor-centred accounts) are best honed for exploring the particularities of behaviour in their more or less unique historical geographical and social setting. Callon too focuses on the efficacy of the tools that both disciplines bring to bear but he takes the discussion further by investigating why one set of explanatory mechanisms appears to be more successful than the other. His conclusions, which have sparked an intense debate in the field of economic sociology and beyond, are that certain theories and tools not only describe but help to create the settings in which they are applied. In other words, certain theoretical constructs appear to more accurately reflect their setting because they are performed in (and in so doing help constitute) that setting. It is the notion of ‘performance’ (and ‘performativity’) which is crucial here. The term suggests that certain phenomena are, to a substantial degree, brought into existence and sustained through the actual ‘doing of them’ (Callon et al., 2002 and MacKenzie, 2005). Callon and MacKenzie have applied this concept in economic sociology to explain how markets may be brought into being. Callon suggests that if people are to trade and purchase goods in a ‘market’ (as opposed to any of the other ways the exchange of goods might occur) then the market has to be continually performed. The strength of his work lies in the conceptual framework he introduces to show this performance. For instance, he discusses and confirms the existence of ‘homo economicus’, suggesting that economic man does indeed exist but only because ‘he’ is brought into being through a process of ‘disentanglement’ and ‘framing’.1 It is because of disentanglement/framing says Callon that actors can make decisions which appear ‘calculated’ and ‘rational’. Callon also introduces a third term, ‘overflowing’, to emphasise the constant need to reframe as new information relevant to the decision comes forward. Holm (2002) describes how in Callon’s approach actors and objects are so thoroughly entangled in ‘sticky cultural contexts’ that these processes of framing and disentanglement are crucial if market actors are to evaluate and calculate the likely results of their decisions: buyer and seller must be constructed as ‘autonomous agencies’ and the object to be sold must be constructed as stable and commodity-like. Importantly, the mechanisms that enable this decontextualisation are not part of ‘human nature’ but have to be actively constructed (Holm, 2002). To put it more in the terms we want to develop in this article, various assessment and comparative measures must be defined, constructed and put in place if framing and disentanglement are to take place. Paraphrasing Holm, the more taken for granted, embedded, and ‘thing-like’ these measures become, the more effective they will be in untangling objects from their social, cultural and technological contexts, and thus enabling actors to make the calculated decision they desire (Holm, 2002). These are important ideas, which, if they can be applied to the study of decision making during economic transactions, can also be useful for understanding the choice of one technology over another.