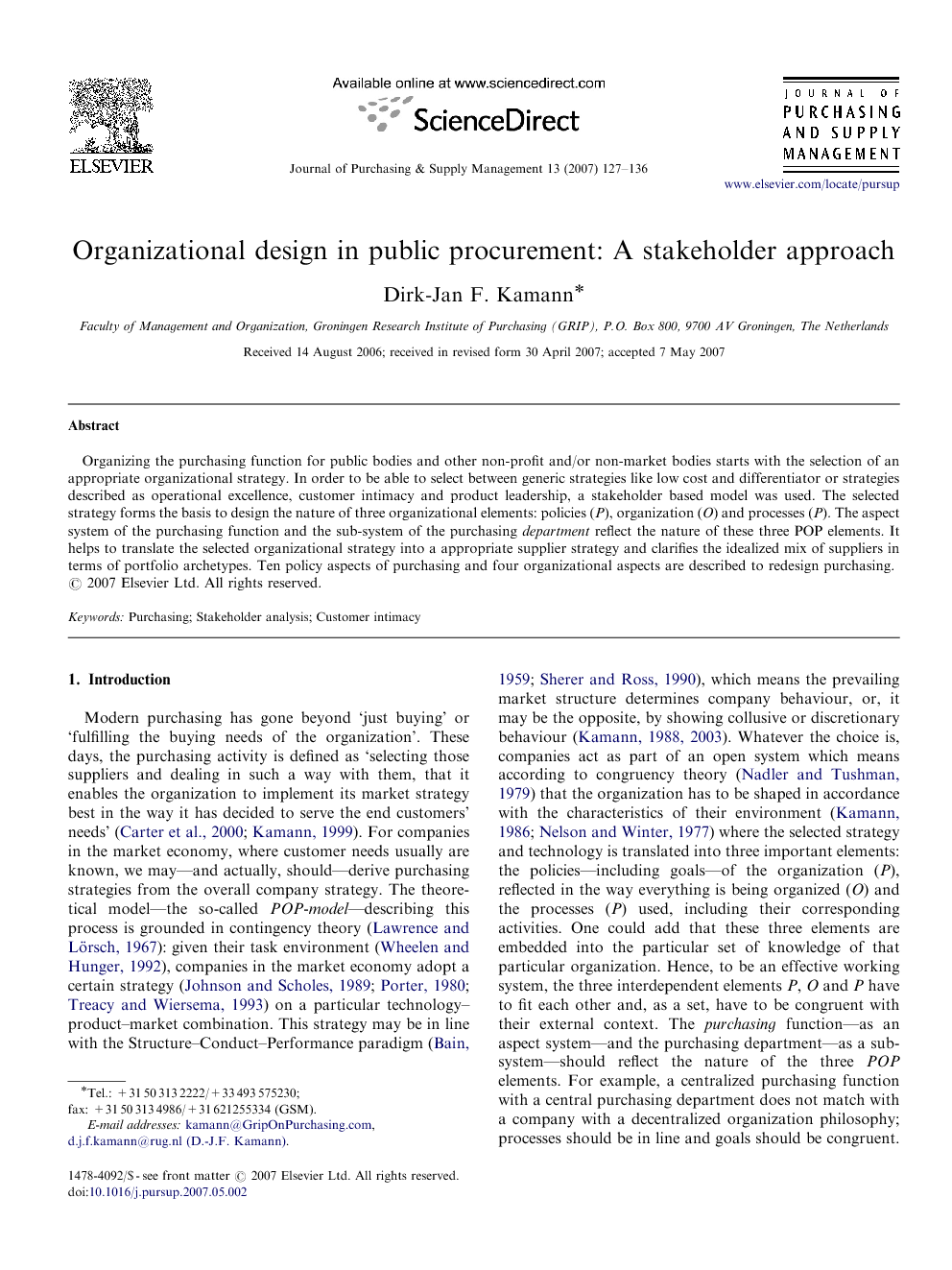 Organizing the purchasing function for public bodies and other non-profit and/or non-market bodies starts with the selection of an appropriate organizational strategy. In order to be able to select between generic strategies like low cost and differentiator or strategies described as operational excellence, customer intimacy and product leadership, a stakeholder based model was used. The selected strategy forms the basis to design the nature of three organizational elements: policies (P), organization (O) and processes (P). The aspect system of the purchasing function and the sub-system of the purchasing department reflect the nature of these three POP elements. It helps to translate the selected organizational strategy into a appropriate supplier strategy and clarifies the idealized mix of suppliers in terms of portfolio archetypes. Ten policy aspects of purchasing and four organizational aspects are described to redesign purchasing.

Modern purchasing has gone beyond ‘just buying’ or ‘fulfilling the buying needs of the organization’. These days, the purchasing activity is defined as ‘selecting those suppliers and dealing in such a way with them, that it enables the organization to implement its market strategy best in the way it has decided to serve the end customers’ needs’ (Carter et al., 2000; Kamann, 1999). For companies in the market economy, where customer needs usually are known, we may—and actually, should—derive purchasing strategies from the overall company strategy. The theoretical model—the so-called POP-model—describing this process is grounded in contingency theory ( Lawrence and Lörsch, 1967): given their task environment ( Wheelen and Hunger, 1992), companies in the market economy adopt a certain strategy ( Johnson and Scholes, 1989; Porter, 1980; Treacy and Wiersema, 1993) on a particular technology–product–market combination. This strategy may be in line with the Structure–Conduct–Performance paradigm ( Bain, 1959; Sherer and Ross, 1990), which means the prevailing market structure determines company behaviour, or, it may be the opposite, by showing collusive or discretionary behaviour ( Kamann, 1988, 2003). Whatever the choice is, companies act as part of an open system which means according to congruency theory ( Nadler and Tushman, 1979) that the organization has to be shaped in accordance with the characteristics of their environment ( Kamann, 1986; Nelson and Winter, 1977) where the selected strategy and technology is translated into three important elements: the policies—including goals—of the organization (P), reflected in the way everything is being organized (O) and the processes (P) used, including their corresponding activities. One could add that these three elements are embedded into the particular set of knowledge of that particular organization. Hence, to be an effective working system, the three interdependent elements P, O and P have to fit each other and, as a set, have to be congruent with their external context. The purchasing function—as an aspect system—and the purchasing department—as a sub-system—should reflect the nature of the three POP elements. For example, a centralized purchasing function with a central purchasing department does not match with a company with a decentralized organization philosophy; processes should be in line and goals should be congruent. Although the statement that purchasing goals should be congruent with company goals and strategies seems rather obvious, in-depth case studies (Kamann et al., 2001) indicate that this actually is rather an exception than the rule. When screening 55 master theses in purchasing at the University of Groningen, I found that at best seven companies had what could be seen as a ‘proper fit’ between purchasing policies and company strategies. Hence, if this ‘translation’ of customer needs into purchasing policies—apparently—is difficult for market oriented companies, one can imagine, it is even more difficult for public bodies and semi-state organizations. First of all, there may be a problem in identifying ‘the’ customer at all, or ‘the market’ and ‘the’ technology applied. While in the market economy, the customer is the one who pays the bill, with public bodies this may be much more difficult to trace. Who pays and who is the customer in the case of unemployment benefits? Or, who is the customer in the case of prisons; the prisoner? He usually does not pay for his lodgings and food. Who is the customer in health care: the patient or the health insurance companies? And, when the ‘customer’ is not evident, even more obscure becomes the question ‘what does he want’ and what should be the effect of this on the composition of my supply base and the demands I put to my suppliers. Hence, even if a strategy exists, usually this is a rather political statement or phrased in container terms like ‘best value’ as in the case of British health care. Therefore, I looked for a substitute for the straightforward ‘company strategies’ and ‘customer profile’ and ‘customer demands’. I found this by incorporating the literature on stakeholders and stakeholder mapping and combining this with the concept ‘customer intimacy’. After the discussion of stakeholders, I will discuss the mechanism that translates these stakeholder demands into goals and strategies of the organization, introducing the ‘web’ and ‘club’ concepts. Then, the POP-model will be expanded to incorporate modern market strategies like operational excellence, product leadership and customer intimacy. This will result in a number of archetypes for public bodies. These archetypes are used in the successive sections to differentiate between the formulation of purchasing policies and between various ways to design the organization, given a particular organizational strategy adopted to meet certain stakeholder demands.

Organizing the purchasing function for public bodies and other non-profit bodies starts with its identifying its stakeholders and the various demands they pose. After reviewing the nature of these demands and the way they have to be met, the organization should translate this into an appropriate strategy: operational excellence, product leadership or customer intimacy. This strategy forms the basis for the design of three interdependent elements: policies (P), organization (O) and processes (P). The way these three elements are filled in for the purchasing function, differs between strategies. This implies that when the organization finds that two opposite strategies are required, this would require two different ways to organize the POP elements. This would either cause friction or sub-optimization. Splitting up then is a better solution. The POP-model also helps to formulate an appropriate supplier strategy, to create a suitable supply base: it clarifies the idealized mix of suppliers in terms of portfolio archetypes. Discussing the various elements and arguments as such may be a useful exercise for many public bodies to become aware of the ‘stakeholder’ orientation of public bodies. Also in public bodies, the purchaser has to be aware that at the end, he is serving the final user and should fill in his supplier relations in such a way that the final user and the dominant stakeholder representing those users, is satisfied. If this contribution could stimulate this way of thinking in some way, I would be satisfied.