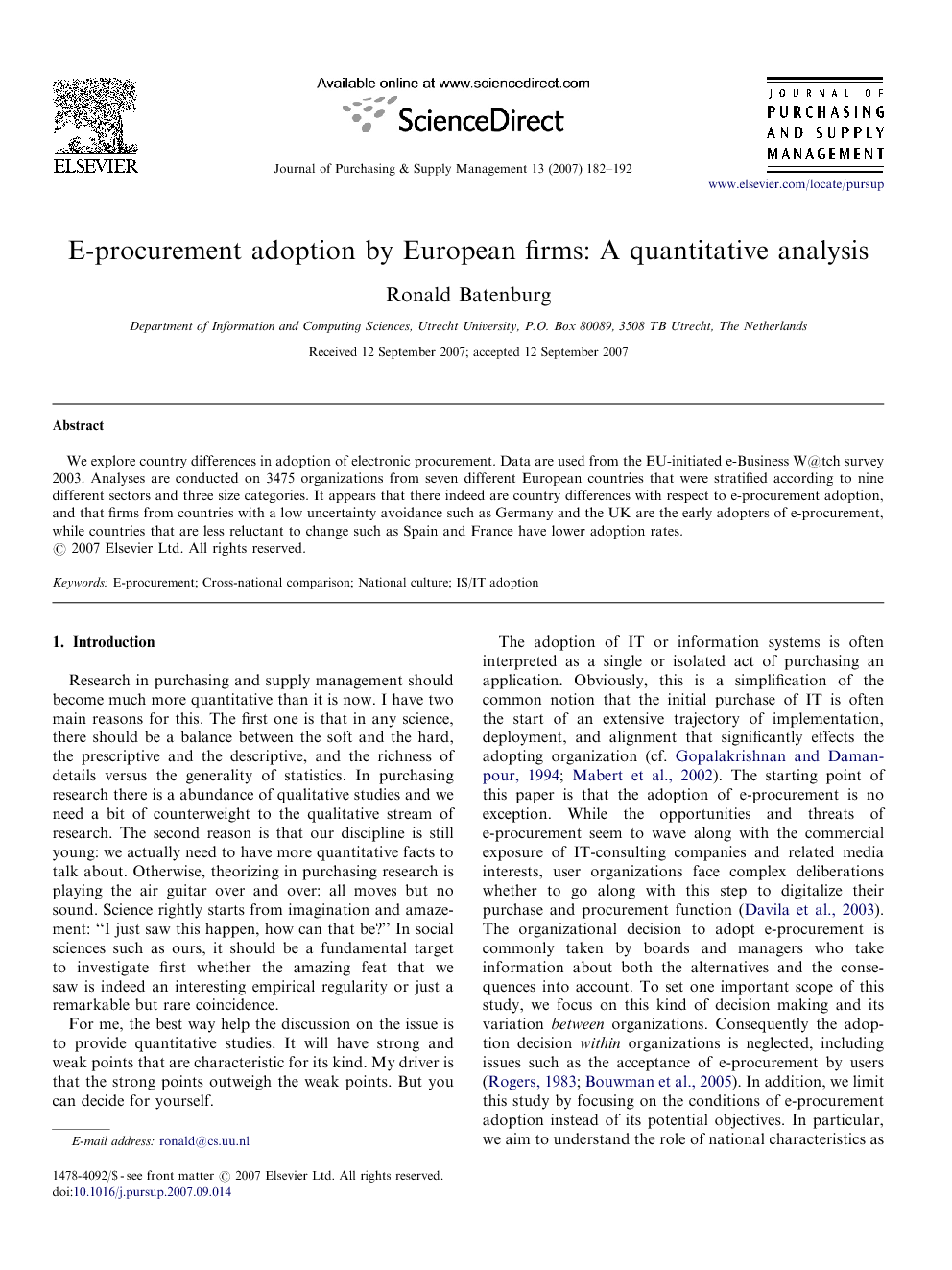 We explore country differences in adoption of electronic procurement. Data are used from the EU-initiated e-Business W@tch survey 2003. Analyses are conducted on 3475 organizations from seven different European countries that were stratified according to nine different sectors and three size categories. It appears that there indeed are country differences with respect to e-procurement adoption, and that firms from countries with a low uncertainty avoidance such as Germany and the UK are the early adopters of e-procurement, while countries that are less reluctant to change such as Spain and France have lower adoption rates.

Research in purchasing and supply management should become much more quantitative than it is now. I have two main reasons for this. The first one is that in any science, there should be a balance between the soft and the hard, the prescriptive and the descriptive, and the richness of details versus the generality of statistics. In purchasing research there is a abundance of qualitative studies and we need a bit of counterweight to the qualitative stream of research. The second reason is that our discipline is still young: we actually need to have more quantitative facts to talk about. Otherwise, theorizing in purchasing research is playing the air guitar over and over: all moves but no sound. Science rightly starts from imagination and amazement: “I just saw this happen, how can that be?” In social sciences such as ours, it should be a fundamental target to investigate first whether the amazing feat that we saw is indeed an interesting empirical regularity or just a remarkable but rare coincidence. For me, the best way help the discussion on the issue is to provide quantitative studies. It will have strong and weak points that are characteristic for its kind. My driver is that the strong points outweigh the weak points. But you can decide for yourself. The adoption of IT or information systems is often interpreted as a single or isolated act of purchasing an application. Obviously, this is a simplification of the common notion that the initial purchase of IT is often the start of an extensive trajectory of implementation, deployment, and alignment that significantly effects the adopting organization (cf. Gopalakrishnan and Damanpour, 1994; Mabert et al., 2002). The starting point of this paper is that the adoption of e-procurement is no exception. While the opportunities and threats of e-procurement seem to wave along with the commercial exposure of IT-consulting companies and related media interests, user organizations face complex deliberations whether to go along with this step to digitalize their purchase and procurement function (Davila et al., 2003). The organizational decision to adopt e-procurement is commonly taken by boards and managers who take information about both the alternatives and the consequences into account. To set one important scope of this study, we focus on this kind of decision making and its variation between organizations. Consequently the adoption decision within organizations is neglected, including issues such as the acceptance of e-procurement by users ( Rogers, 1983; Bouwman et al., 2005). In addition, we limit this study by focusing on the conditions of e-procurement adoption instead of its potential objectives. In particular, we aim to understand the role of national characteristics as one particular condition that might influence the likelihood of adoption. Interest in cross-national differences for IT adoption and procurement have started to emerge, but so far little or no empirical studies have been done on e-procurement as the combination of both. Although reports and normative studies about “world class purchasing” and “purchasing excellence” emphasize the importance of international comparisons through benchmarking ( Boodie et al., 2002), more profound empirical indicators for procurement levels across countries is needed. With the rapid and world-wide increase of Internet and web-based application in organizations, the emergence of e-procurement (or: on-line purchasing) has become an interesting and distinctive performance indicator. In addition, existing research on country differences in the adoption of IT and ICT in general can assist in explaining differences in the adoption rate and pace. In the following section we indicate and understand the potential effect of country characteristics on the e-procurement adoption of organizations. First, I elaborate on some theoretical expectations on cross-national differences in the next section. Then, a large-scale dataset that results from a international survey among European organizations is introduced. This survey, initiated by the European Community under the label “e-Business W@tch,” is used to describe and explain the e-procurement adoption of companies from seven different European countries around 2003. Before doing so, the influence of industry (and company) size is explored as a prominent background determinant of e-procurement. The final, “controlled” cross-national analysis of e-procurement adoption is then presented and expectations are evaluated. The last section closes with summary and suggestions.

The two hypotheses we formulated in an earlier section of this paper are finally tested on the level of countries. Obviously, this means that the number of observations is very limited because we only have seven countries to relate cultural values and e-procurement adoption rates to each other. Instead of the standard statistical measures we present two-dimensional scatterplots. These pictures provide us with the opportunity to actually identify how the data points (i.e. the particular countries involved) contribute to the expected relationship. If we accept “visual inspection” as a bold method to explore the validity of our hypotheses, both scatterplots appear to support the expected relationship between e-procurement adoption and cultural values at the country level. With regard to Hofstede's cultural value uncertainty avoidance (left picture) we see clear negative effect: high uncertainty avoidance goes with low levels of online purchasing. Poland, Spain, Italy, and France seem to form one cluster of (relatively) high uncertainty avoidance combined with (relatively) low e-procurement adoption, while Germany and the UK—distinct in their high level of e-procurement—have (relatively) low scores on uncertainty avoidance. A similar expectation was formulated with regard to Au's cultural item “change is good,” as support for this value is expected to be positively related with e-procurement adoption. The right part of Fig. 2 shows that the position of most countries supports the hypothesis, except for Poland and (to a lesser extent) Italy. The obvious reason behind this lies in the fact that Poland and Italy appear to have a (relative) positive orientation toward change but also a (relative) positive attitude toward uncertainty avoidance. It would imply a further comparison between Au's and Hofstede's typology to investigate this seeming discrepancy which is beyond the scope of this paper.