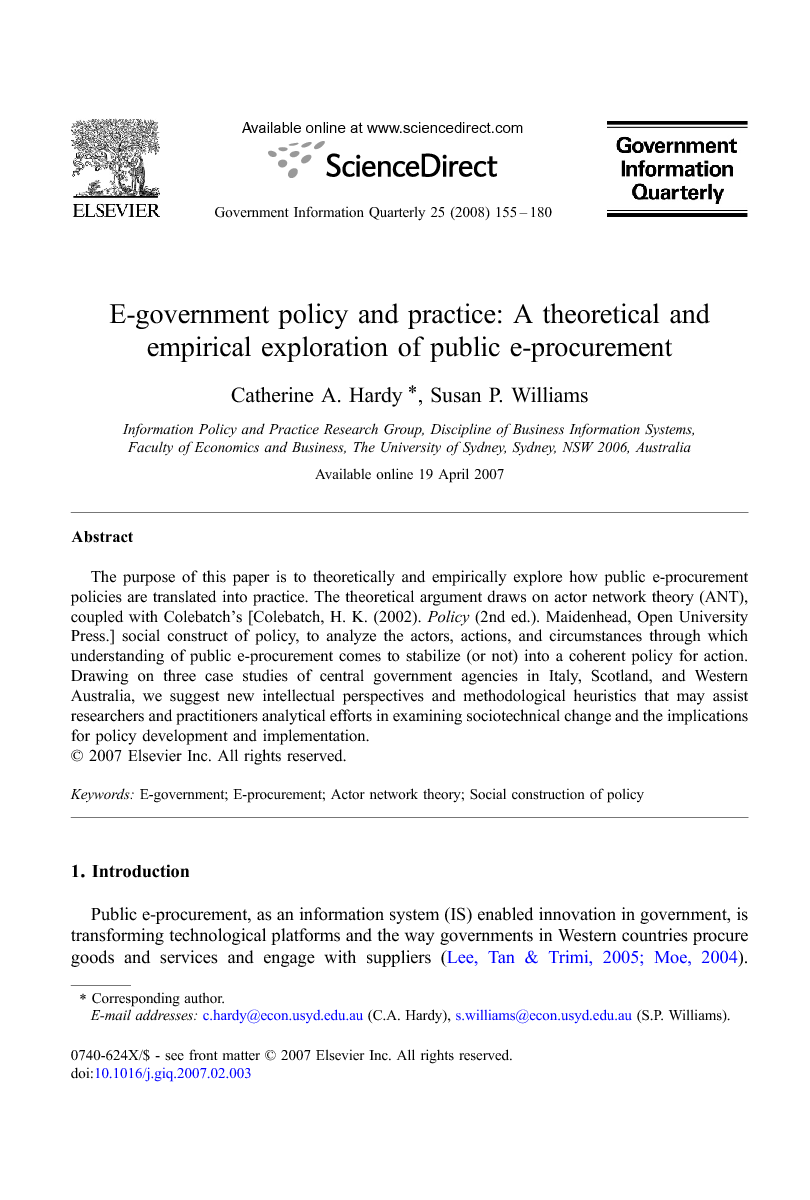 The purpose of this paper is to theoretically and empirically explore how public e-procurement policies are translated into practice. The theoretical argument draws on actor network theory (ANT), coupled with Colebatch’s [Colebatch, H. K. (2002). Policy (2nd ed.). Maidenhead, Open University Press.] social construct of policy, to analyze the actors, actions, and circumstances through which understanding of public e-procurement comes to stabilize (or not) into a coherent policy for action. Drawing on three case studies of central government agencies in Italy, Scotland, and Western Australia, we suggest new intellectual perspectives and methodological heuristics that may assist researchers and practitioners analytical efforts in examining sociotechnical change and the implications for policy development and implementation.

Public e-procurement, as an information system (IS) enabled innovation in government, is transforming technological platforms and the way governments in Western countries procure goods and services and engage with suppliers (Lee et al., 2005 and Moe, 2004). Leveraging information technology to achieve better information, value for money, efficiencies, and maximize procurement effectiveness is widely documented with respect to both public and private sector contexts (Moe, 2004, National Association of State Procurement Officials (NASPO)., 2005, Carayannis and Popescu, 2005, Roth, 2001, Presutti, 2003 and Puschmann and Alt, 2005). However, while public e-procurement has similarities with the private sector, in terms of its focus on value, competitiveness, and accountability, it differs because of its social welfare implications (Panayiotou, Gayialis & Tatsiopoulos, 2004). Hence, public e-procurement has policy implications not only with respect to setting rules and standards that promote fairness, equity, and transparency in public contracting but also in advancing other government initiatives and policy goals such as economic development and information and communication technology (ICT) innovations (National Association of State Procurement Officials (NASPO)., 2005 and Carayannis and Popescu, 2005). The pace of technological change (Munir & Jones, 2004), together with broader shifts in forms of governing generally in liberal democratic states (Dean & Henman, 2004), characterized by a trend towards the need for a wider range of participants in collective decision making processes in uncertain, and complex contexts, has created challenges in how efficiency is achieved, accountability maintained, and issues of equity addressed in the provision of public services (Stoker, 2006). This suggests that policy goals of IS enabled government innovations, such as public e-procurement, may be more amorphous, the delivery of which may rely on the coordination of heterogeneous actors within, and across organizational boundaries. Further, tensions and conflicts may arise with other policy areas because of competing objectives or priorities (such as economically efficient sourcing strategies vs regional development initiatives), changing political landscapes, and different information systems. This presents risks and raises uncertainties in terms of how some “sufficiently stable” understanding of public e-procurement is constructed upon which government policy, and potentially substantial expenditure will be based. Further, the goals articulated may bear little resemblance to what is happening in practice. This may raise the question that if the outcome differs significantly from the stated intentions whether there has been some “implementation failure” with the policy (Colebatch, 2002). While policy may be clearly grounded in some conscious choice, its origins may exist in practice (Colebatch, 2002). Therefore, determining what business designs will deliver the greatest benefits and achieving desired goals in a prescribed timeframe may prove difficult. These issues focus attention on the need for a policy approach that is sensitive to sociotechnical change. That is, to assist in understanding how we arrive at, and what events precede moments described as e-procurement policy implementation success, and the role of policy in shaping these moments. The current literature is limited in both its attention to and perspectives on public e-procurement policy. For example, it has been viewed as a driver in the design of the procurement process (Panayiotou et al., 2004), and as an implication arising from e-procurement use (Chu, Hsiao & Chen, 2004) or “new information technology” to support the “delivery of an effective public procurement policy” (Carayannis & Popescu, 2005) taking an instrumental perspective of known desired objectives. The way in which policy may shape and be transformed in e-procurement practice is less visible yet critical in further developing theory about public e-procurement policy as well as to assist practice. The purpose of this paper is to examine how abstract governmental e-procurement policies are translated into public procurement practices addressing three guiding questions: What is the nature of public e-procurement and how is it developed in localized situations over time? How did public e-procurement practice form the basis (or not) for government action and policy? How is the concept of public e-procurement policy itself represented and mobilized in different contexts? The story of its implementation is provided by drawing on three case studies of central government agencies in Italy, Scotland, and Western Australia, together with an analysis of its constituent elements laid out using actor network theory (ANT) (Callon, 1986, Latour, 1987 and Law, 1991) and Colebatch’s (2002) social construct of policy. In doing so three key objectives are served. Firstly, to make visible role(s) played by key actors in different settings that assisted in translating e-procurement policy into practice. Secondly, provide an empirical illustration of how this analytical lens is a useful methodological heuristic for making sense of e-procurement in action. Thirdly, offer “new” intellectual perspectives that have the potential to contribute to the development of a more enhanced understanding of sociotechnical change and policy implementation in terms of how “differing understandings encounter one another” (Colebatch, 2002, p. 61) in IS-enabled innovations in government. The paper is organized as follows. In the next section, a brief description of the representations and developments in policy theory is provided to set the context for the discussion relating to Colebatch’s social construct of policy. Insights offered by ANT are developed with regards to issues of sociotechnical change and policy. This is followed by an outline of our research design and method. We then illustrate how the theoretical perspectives were employed to make sense of e-procurement in action through the three case studies. The cases are used as judicious devices to illustrate the analytical framework and make visible the nuances of sociotechnical change and policy implementations, rather than report the research projects in detail. Finally we discuss our conclusions and implications for both research and practice.

This paper has shown how e-procurement does not have a unitary identity or discrete associations but rather consists of multiple stakeholders and representations that manifest differently in varying situations and contexts. We have conceptualized this with the aid of ANT and Colebatch’s social construct of policy and illustrated this through three case studies. In doing so, our intention is not to suggest that these theories are the only or the most suitable in informing e-procurement policy and practice research. Rather, it is intended to be illustrative of the potential for such theories in contributing to and progressing thought in e-procurement policy and practice and e-government research more broadly, particularly in terms of how ideas are made sense of and translated into policy and practice.