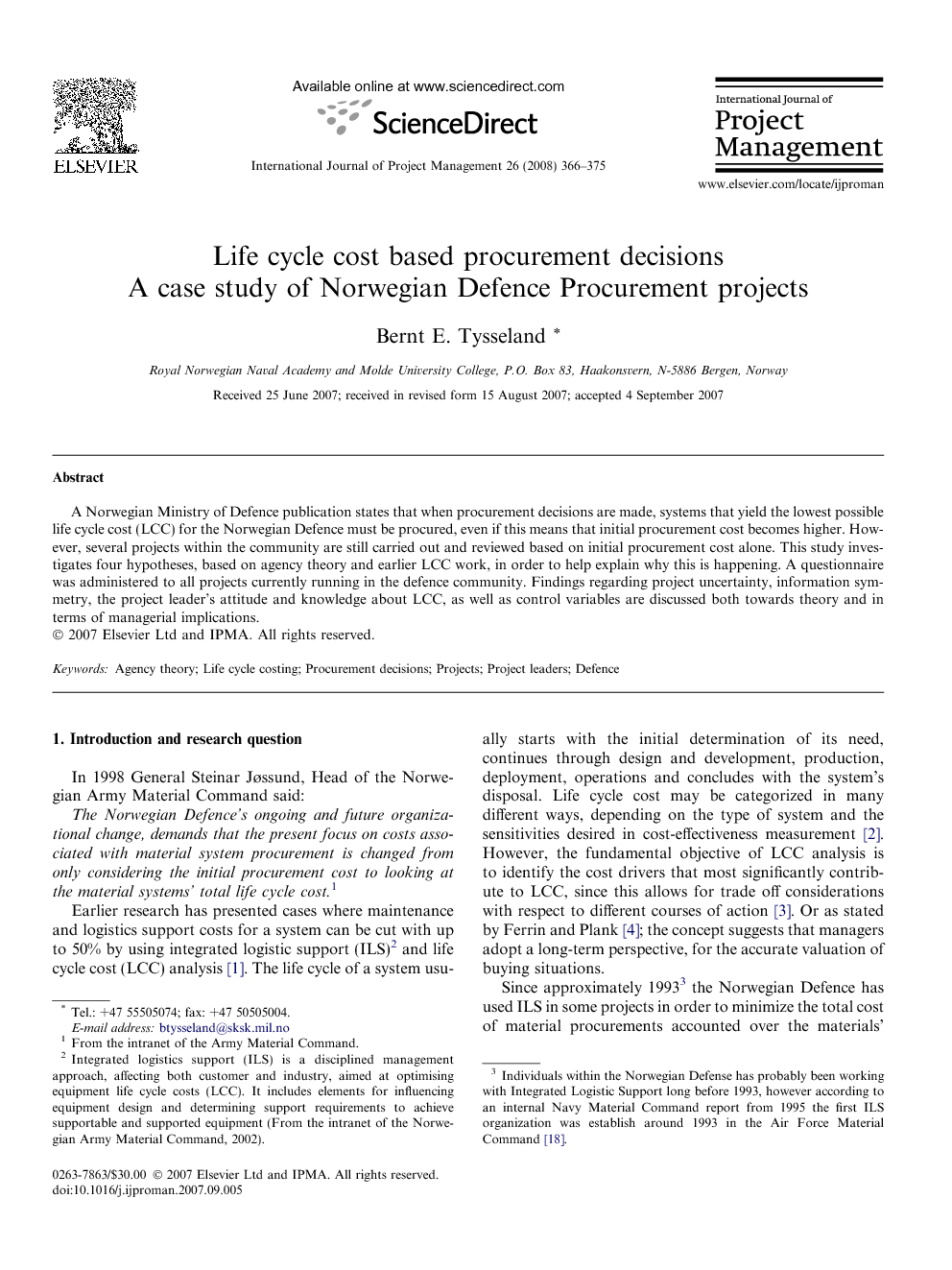 A Norwegian Ministry of Defence publication states that when procurement decisions are made, systems that yield the lowest possible life cycle cost (LCC) for the Norwegian Defence must be procured, even if this means that initial procurement cost becomes higher. However, several projects within the community are still carried out and reviewed based on initial procurement cost alone. This study investigates four hypotheses, based on agency theory and earlier LCC work, in order to help explain why this is happening. A questionnaire was administered to all projects currently running in the defence community. Findings regarding project uncertainty, information symmetry, the project leader’s attitude and knowledge about LCC, as well as control variables are discussed both towards theory and in terms of managerial implications.

In 1998 General Steinar Jøssund, Head of the Norwegian Army Material Command said: The Norwegian Defence’s ongoing and future organizational change, demands that the present focus on costs associated with material system procurement is changed from only considering the initial procurement cost to looking at the material systems’ total life cycle cost. 1 Earlier research has presented cases where maintenance and logistics support costs for a system can be cut with up to 50% by using integrated logistic support (ILS)2 and life cycle cost (LCC) analysis [1]. The life cycle of a system usually starts with the initial determination of its need, continues through design and development, production, deployment, operations and concludes with the system’s disposal. Life cycle cost may be categorized in many different ways, depending on the type of system and the sensitivities desired in cost-effectiveness measurement [2]. However, the fundamental objective of LCC analysis is to identify the cost drivers that most significantly contribute to LCC, since this allows for trade off considerations with respect to different courses of action [3]. Or as stated by Ferrin and Plank [4]; the concept suggests that managers adopt a long-term perspective, for the accurate valuation of buying situations. Since approximately 19933 the Norwegian Defence has used ILS in some projects in order to minimize the total cost of material procurements accounted over the materials’ total life cycle. In the summer of 2004 the importance of ILS and LCC was highlighted by the Norwegian Ministry of Defense (NoMoD) in their publication. “Konsept for fremskaffelse av materielle kapasiteter i forsvarssektoren” (Norwegian title). In this publication the NoMoD clearly states that when investment decisions are made, solutions/systems that yield the lowest possible life cycle cost, given equal system effectiveness, must be preferred, even if this means that the initial investment cost becomes higher. However, approximately at the same time Commodore Morten Jacobsen, Chief of Procurement in the Norwegian Defence Logistic Organization (NoDLO), said in a speech that they are still experiencing that procurement in some projects are carried out and reviewed based on initial procurement costs alone. Reports from the United Kingdom are also concluding that the British experience is much the same [5]. Based on the information presented above the main question of this research is “What can explain that some procurement projects are still carried out and reviewed based on initial procurement costs alone when the official policy is to apply the life cycle cost approach?”

As stated in the theory section, Eisenhardt [8] claims that two main problems occur in agency relationships, the first problem is that of conflicting goals between the principal and the agent, and the second problem is that of risk preferences. It was assumed that the NoMOD would be risk neutral when it comes to evaluating projects based on life cycle cost, while the project leader was assumed to be risk adverse, especially if the project in question had high project uncertainty. The first hypothesis therefore stated that “Project uncertainty will negatively affect the use of LCC-based procurement decisions”. The data analysis showed that uncertainty correlated to the use of LCC, and in the direction that theory assumed (negative correlation). However, the correlation was weak and not statistically significant, and hence the hypothesis had to be rejected. It is however interesting to notice that there is a statistical significant bivariate correlation between uncertainty and information symmetry (see Table 2). This correlation indicates that the project board is more informed about the use of LCC if the uncertainty for the project is high (non COTS). Information systems can curb adverse selection [8], and hence it can be argued that NoMoD through the project boards has made sure that less information asymmetry can occur when project uncertainty is high (non COTS) in order to reduce the possibility of adverse selection. It looks like the Norwegian Defence already uses the agency theory concept of information alignment in order to reduce the possibility of adverse selection more in projects with high uncertainty than in projects with low uncertainty, and due to this we could not statistically conclude that project uncertainty negatively affects the use of LCC-based procurement decisions. As stated above the first problem in agency relationships is that of conflicting goals between the principal and the agent [8]. The research questions tried to captured the attitude of the project leaders towards the use of LCC, in order to answer Hypothesis 2. The hypothesis was supported by the empirical data, and from a theoretical standpoint this means that less goal conflict exists between projects’ leaders with a positive attitude towards LCC and the principle, than between the principle and project leaders with a less positive attitude towards LCC. According to agency theory one of the most effective ways to avoid goal conflicts is to align the information between the principle and the agent [8]. Statistically significant support, based on the 0.05 significant level, was not found towards the hypothesis regarding information symmetry between the principal and the agent (Hypothesis 3). However, there is no more than 11% chance that the positive beta coefficient found in the empirical data (which supports the hypothesis), is due to chance. Further, since the sample size in the case of this research consists of more than 50% of the total population, it is very likely that information symmetry between the principal and the agent really makes a unique contribution to the use of LCC based procurement decisions. Hence, even if not statistically supported, the data is in line with the agency theory proposition. Regarding the proposition that when the agent, either by himself or through members within his own project, has thorough knowledge about life cycle costing, he will be more likely to understand and accept the position of the principle (NoMoD), and therefore use LCC (expressed in Hypothesis 4) is supported by the data. This means that Wååk’s [1] theory about lack of knowledge, with regard to LCC, leading to less use is empirically supported. At the start of the research, control variables regarding what main type of procurement the project is dealing with (project-type), what NoDLO site the project works out (project-site) of and the size of the project in terms of personnel working with LCC (project-size) were included in the research model. The project leaders were asked to mark what subgroup within each of the tree variables they belonged to. No hypotheses were made before the collection of data, and it was really not expected to be a statistically significant difference between the subgroups within each variables. This was also the case regarding project-type and project-size. Somewhat surprisingly though, the data clearly show that project leaders working in Bergen (the Navy site) are on average less likely to use LCC based procurement decisions than their colleagues working in the “Air Force site” and the “Army site”. The data collected cannot verify why this is the case. It is however a fact that the Navy site (Bergen) is much further in physical distance from the NoMoD (the principal) situated in Oslo, than the Army site (Kolsås, just outside Oslo) and Air Force site (Kjeller, also just outside Oslo). Other explanations could be connected to organizational cultural differences between Navy, Army and Air Force regarding how closely the goals and tasks of the mandate group (the principal), are followed. These are however only speculations.