عنوان انگلیسی
From products to services and back again: Towards a new service procurement logic
دانلود فوری مقاله + سفارش ترجمه 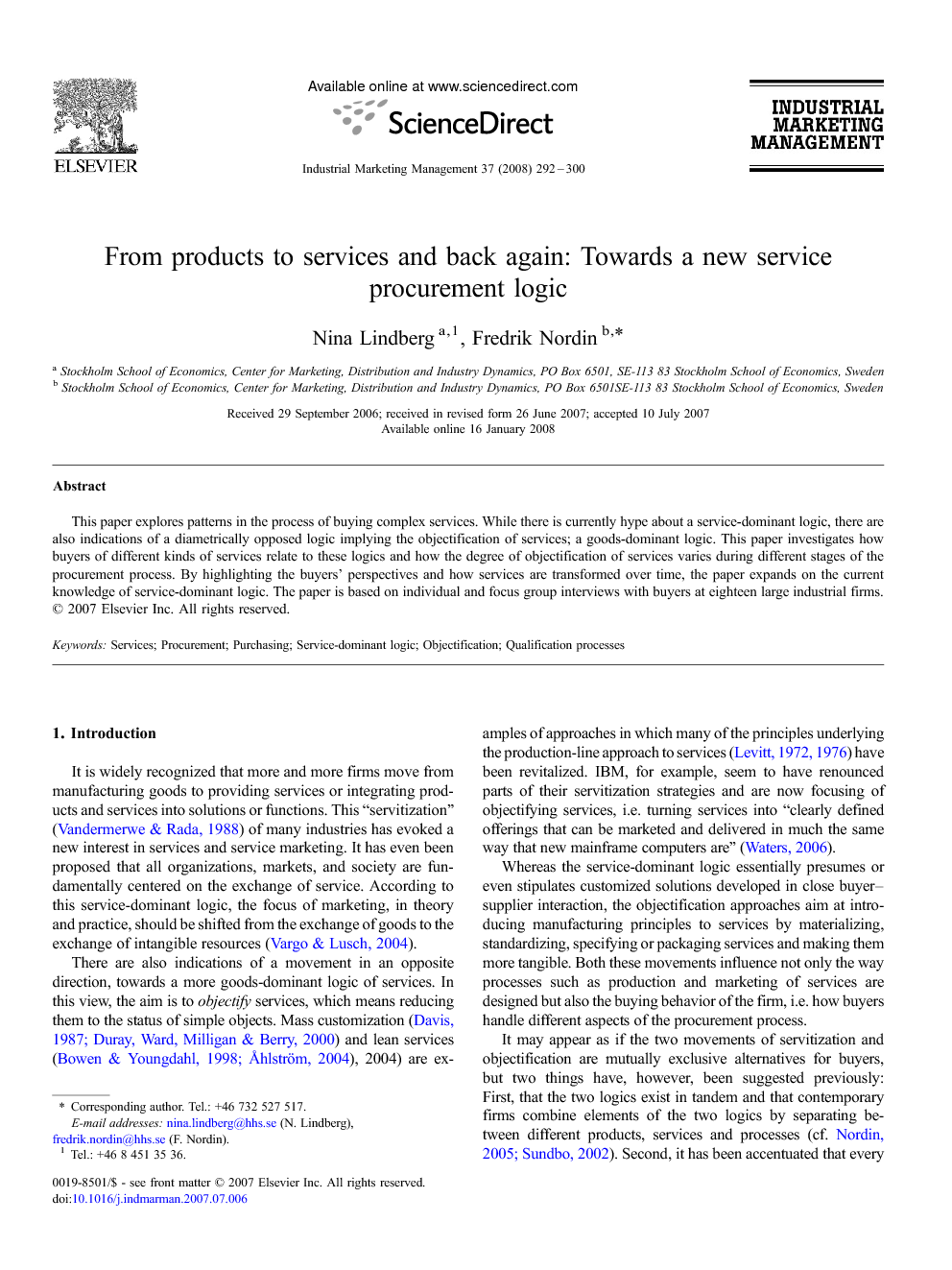 This paper explores patterns in the process of buying complex services. While there is currently hype about a service-dominant logic, there are also indications of a diametrically opposed logic implying the objectification of services; a goods-dominant logic. This paper investigates how buyers of different kinds of services relate to these logics and how the degree of objectification of services varies during different stages of the procurement process. By highlighting the buyers' perspectives and how services are transformed over time, the paper expands on the current knowledge of service-dominant logic. The paper is based on individual and focus group interviews with buyers at eighteen large industrial firms.

It is widely recognized that more and more firms move from manufacturing goods to providing services or integrating products and services into solutions or functions. This “servitization” (Vandermerwe & Rada, 1988) of many industries has evoked a new interest in services and service marketing. It has even been proposed that all organizations, markets, and society are fundamentally centered on the exchange of service. According to this service-dominant logic, the focus of marketing, in theory and practice, should be shifted from the exchange of goods to the exchange of intangible resources (Vargo & Lusch, 2004). There are also indications of a movement in an opposite direction, towards a more goods-dominant logic of services. In this view, the aim is to objectify services, which means reducing them to the status of simple objects. Mass customization ( Davis, 1987 and Duray et al., 2000) and lean services ( Bowen and Youngdahl, 1998 and Åhlström, 2004), 2004) are examples of approaches in which many of the principles underlying the production-line approach to services ( Levitt, 1972 and Levitt, 1976) have been revitalized. IBM, for example, seem to have renounced parts of their servitization strategies and are now focusing of objectifying services, i.e. turning services into “clearly defined offerings that can be marketed and delivered in much the same way that new mainframe computers are” ( Waters, 2006). Whereas the service-dominant logic essentially presumes or even stipulates customized solutions developed in close buyer–supplier interaction, the objectification approaches aim at introducing manufacturing principles to services by materializing, standardizing, specifying or packaging services and making them more tangible. Both these movements influence not only the way processes such as production and marketing of services are designed but also the buying behavior of the firm, i.e. how buyers handle different aspects of the procurement process. It may appear as if the two movements of servitization and objectification are mutually exclusive alternatives for buyers, but two things have, however, been suggested previously: First, that the two logics exist in tandem and that contemporary firms combine elements of the two logics by separating between different products, services and processes (cf. Nordin, 2005 and Sundbo, 2002). Second, it has been accentuated that every product or service, no matter how complex or intangible it is, is objectified at some point in time in order to be exchangeable (Araujo and Spring, 2006 and Callon et al., 2002). In other words, the properties of services are temporarily agreed upon and specified during the procurement process. Otherwise they cannot be traded. Accordingly, it may be insufficient to point to general and static explanatory factors of services, such as their intangibility or perishability, if buying behavior is to be understood. The properties of a service are not only inherently depending on the service category but will also change during the procurement process, i.e. its degree of objectification will vary over time. Such a transformation of services has, however, not been empirically examined before (Rust, Kohli, Gummesson & Arnould, 2006). Thus, the aim of this paper is to contribute to the ongoing marketing discourse on service-dominant logic by highlighting the perspectives on the industrial buyers, and to show how servitization and objectification may work in practice over different stages of the procurement process. Several kinds of services are included, with the main focus on relatively complex ones, i.e. services that are relatively intangible and heterogeneous in their nature; e.g., customized and integrated packages of goods/products and services (so called integrated solutions), research and development services, and management consulting. Such services are more difficult to comprehend, they are infrequently purchased and are often customized for each assignment (Mitchell, 1994 and Vroomen et al., 2005). Thus, they would seem to require a procurement approach in line with the service-dominant logic. As this paper will show, however, procurement practices are often more complex than what would be assumed. The paper is organized as follows: In the next section, a theoretical framework is presented, focusing first on different logics and how they relate to service procurement. The specific research objectives of this study are then presented. Thereafter, the methodology is presented, followed by the research findings. At the end of the paper, an alternative logic to service procurement is introduced, gleaned from the empirical findings of this study and the theories put forth by Callon et al., 2002 and Callon and Muñiesa, 2005 and Araujo and Spring (2006).

This study aims at contributing to the ongoing marketing discourse on service-dominant logic by highlighting the perspectives of the industrial buyers. In exploring the buyer's views and anticipations regarding service sourcing, a counteractive movement towards objectification of services seems equally apparent. The study shows that buyers put a lot of effort into objectifying and calculating their service purchases. In particular, the conventional relation-oriented approach to service procurement seems to be put into question. As buyers recognize the potential benefits of market competition, their procurement approaches include, to an increasing extent, elements of a more transactional orientation, in which service offerings are treated as interchangeable and suppliers are kept at arm's length. Such an approach does, however, not seem to fit neatly with buying more complex services and integrated solutions, why many buyers prefer more standardized and specific service parts. Such preferences ought to be taken into account by industrial marketers as well as by service developers. A new procurement logic is also outlined in the paper, drawn from the empirical data and previous theory (Araujo and Spring, 2006, Callon et al., 2002 and Callon and Muñiesa, 2005). This new procurement logic, in which the process dimension is emphasized, adds to the understanding of the industrial buyer's buying behavior and consequently of the buyer's role, actions and reactions in relation to the service-dominant logic. This would also seem to be relevant for industrial marketing. Since it is based on a limited sample, it must evidently be further developed and tested, however. For example, it ought to be explored in a longitudinal case study that follows, in detail, the qualification of products and services in the procurement process; i.e. how the degree of objectification and relational proximity varies over time. Although this study explores a limited number of buyer's perspectives on buying services, it may inspire industrial marketers and purchasers to challenge the alleged new service-dominant logic. In particular, it ought to heighten the need to deviate from the old product–service dichotomy, not by arguing that everything is a service, but by illuminating that both products and services are, in order to be exchangeable, objectified in the procurement process. With the new procurement logic suggested here, both marketers and purchasers may distinguish more clearly at which points in the exchange process the service or integrated solution is (and perhaps ought to be) standardized, and when it is customized, as well as when a close buyer–supplier interaction is more or less essential.