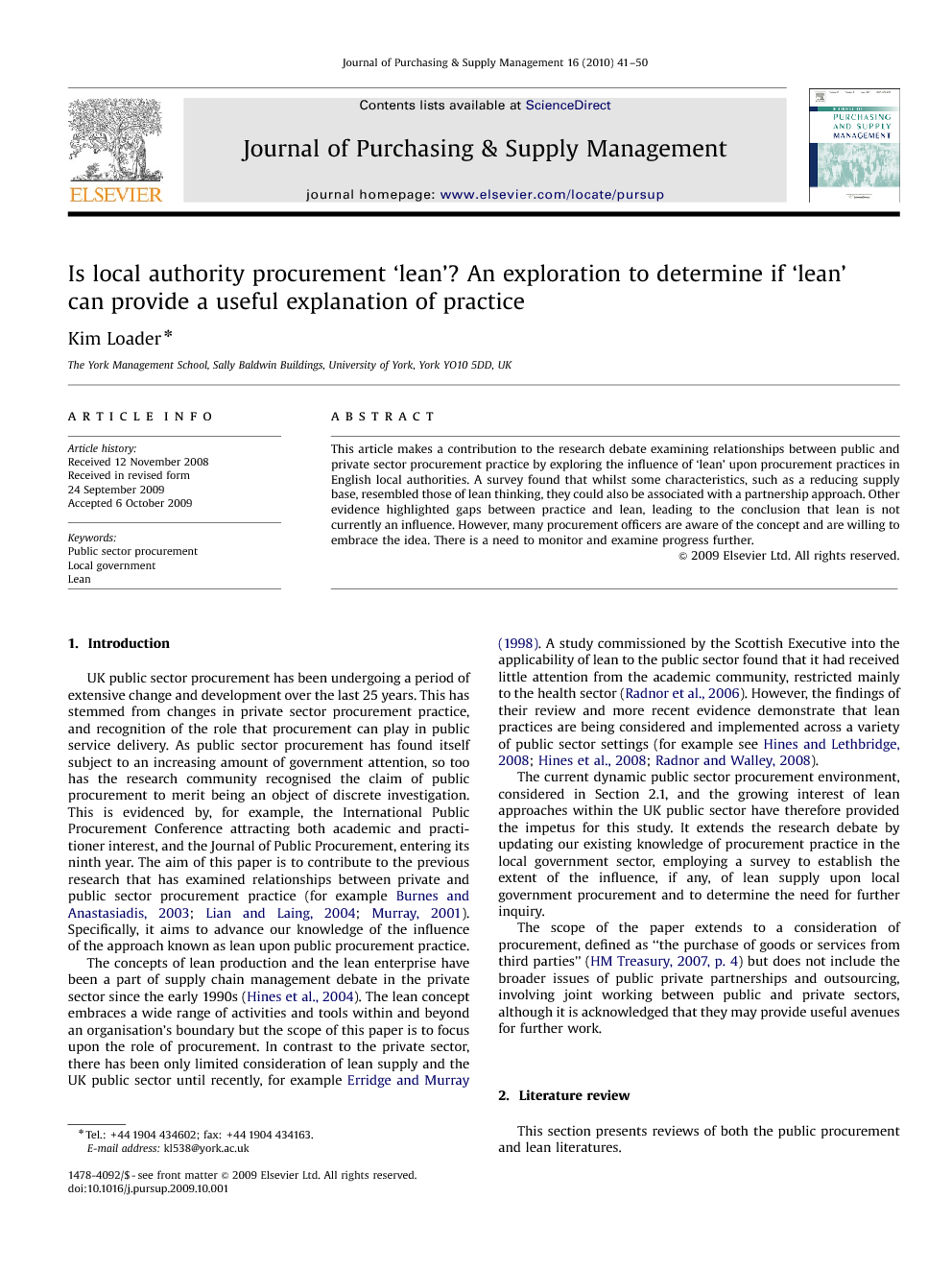 This article makes a contribution to the research debate examining relationships between public and private sector procurement practice by exploring the influence of ‘lean’ upon procurement practices in English local authorities. A survey found that whilst some characteristics, such as a reducing supply base, resembled those of lean thinking, they could also be associated with a partnership approach. Other evidence highlighted gaps between practice and lean, leading to the conclusion that lean is not currently an influence. However, many procurement officers are aware of the concept and are willing to embrace the idea. There is a need to monitor and examine progress further.

UK public sector procurement has been undergoing a period of extensive change and development over the last 25 years. This has stemmed from changes in private sector procurement practice, and recognition of the role that procurement can play in public service delivery. As public sector procurement has found itself subject to an increasing amount of government attention, so too has the research community recognised the claim of public procurement to merit being an object of discrete investigation. This is evidenced by, for example, the International Public Procurement Conference attracting both academic and practitioner interest, and the Journal of Public Procurement, entering its ninth year. The aim of this paper is to contribute to the previous research that has examined relationships between private and public sector procurement practice (for example Burnes and Anastasiadis, 2003; Lian and Laing, 2004; Murray, 2001). Specifically, it aims to advance our knowledge of the influence of the approach known as lean upon public procurement practice. The concepts of lean production and the lean enterprise have been a part of supply chain management debate in the private sector since the early 1990s (Hines et al., 2004). The lean concept embraces a wide range of activities and tools within and beyond an organisation's boundary but the scope of this paper is to focus upon the role of procurement. In contrast to the private sector, there has been only limited consideration of lean supply and the UK public sector until recently, for example Erridge and Murray (1998). A study commissioned by the Scottish Executive into the applicability of lean to the public sector found that it had received little attention from the academic community, restricted mainly to the health sector (Radnor et al., 2006). However, the findings of their review and more recent evidence demonstrate that lean practices are being considered and implemented across a variety of public sector settings (for example see Hines and Lethbridge, 2008; Hines et al., 2008; Radnor and Walley, 2008). The current dynamic public sector procurement environment, considered in Section 2.1, and the growing interest of lean approaches within the UK public sector have therefore provided the impetus for this study. It extends the research debate by updating our existing knowledge of procurement practice in the local government sector, employing a survey to establish the extent of the influence, if any, of lean supply upon local government procurement and to determine the need for further inquiry. The scope of the paper extends to a consideration of procurement, defined as “the purchase of goods or services from third parties” (HM Treasury, 2007, p. 4) but does not include the broader issues of public private partnerships and outsourcing, involving joint working between public and private sectors, although it is acknowledged that they may provide useful avenues for further work.

This article has sought to expand the debate on local authority procurement by contributing evidence on the influence of lean thinking upon procurement practices. It explored procurement practice within local authorities in England in light of the evidence that lean approaches have become of greater interest to the UK public sector within both the practitioner and academic communities (Jones and Mitchell, 2006; NHS Institute, 2008; Radnor and Boaden, 2008). To date many of the developments have occurred within the health sector (Radnor and Walley, 2008) but the introduction of the Business Improvement Package (Department for Communities and Local Government, 2007) has introduced some similar ideas to the local authority sector. The literature review identified the current procurement environment facing local authorities, driven by the need to comply with the National Procurement Strategy for Local Government (ODPM, 2003). Procurement has a broad remit in terms of service delivery but overall it must be guided by a need to achieve value for money. There is also pressure to reduce costs and there is encouragement to achieve this through the use of collaborative aggregation of purchases, and by developing partnerships with suppliers in order to reduce transaction costs. The results just reported do reflect this environment. There is clear evidence of a growth in the use of collaborative approaches to procurement and support for the use of partnerships with suppliers, although the need on occasion to have recourse to other more traditional contract arrangements as well was emphasised. The findings also reflect a belief in procurement's increasingly significant and strategic role, although an evident pre-occupation with cost savings rather than service improvement suggests in fact a focus upon efficiency and value for money rather than the more strategic role of supporting broader government policy objectives (Harland et al., 2007). Relationships appear to be important, both internally with customers and externally with suppliers, although there is scope to do more to measure customer satisfaction, especially on the part of district councils. The survey sought evidence of characteristics and practice typically associated with lean supply. Whilst some of the features and attitudes evident do resonate with a lean approach, principally the increasing length of contracts, the reducing supply base and the closer relationships with suppliers, these are also associated with a partnership approach. The absence of clear policies on supplier reduction, the increasing aggregation of buyer requirements in order to increase leverage, and the relatively weak emphasis upon customers, all suggest that the approach adopted is not lean. The survey determined that some of the responding authorities did have experience of lean practices, and that a majority were familiar with the concept. However, the engagement with lean practice was minimal, with no pattern of adoption. The evidence was derived from a homogenous group of authorities, in terms of policy environment. The findings show considerable similarity overall, with minimal differences or patterns emerging and therefore support a view that practices and attitudes are notably similar across the sample. Returning to the original aim of the research, the influence of lean upon English local authority procurement practice appears minimal and might therefore question the need to develop a research agenda in this area. However, the considerable awareness of the concept, the strong belief that lean is relevant to local government, and the experiences of some with lean, suggest that there is scope to examine further the applicability and implementation of lean within the sector. There is a need to understand these views and the relatively low level of implementation to date, best achieved through a more qualitative research approach. In particular, such an approach would also allow probing to elicit further details, for example in relation to the extent of joint development work between purchaser and supplier, which was not able to be captured satisfactorily with a survey method. Additionally, if there is a continued push for the public sector to achieve greater value and eliminate waste, lean approaches may be adopted more fully and this should be monitored. Other issues raised by the study should also be pursued, namely further investigation of relationships between local authority procurers and supplier consortia; determination of any changes in the concentration of suppliers, and the resultant impact upon competition; and further investigation to determine the division of mutual gain.