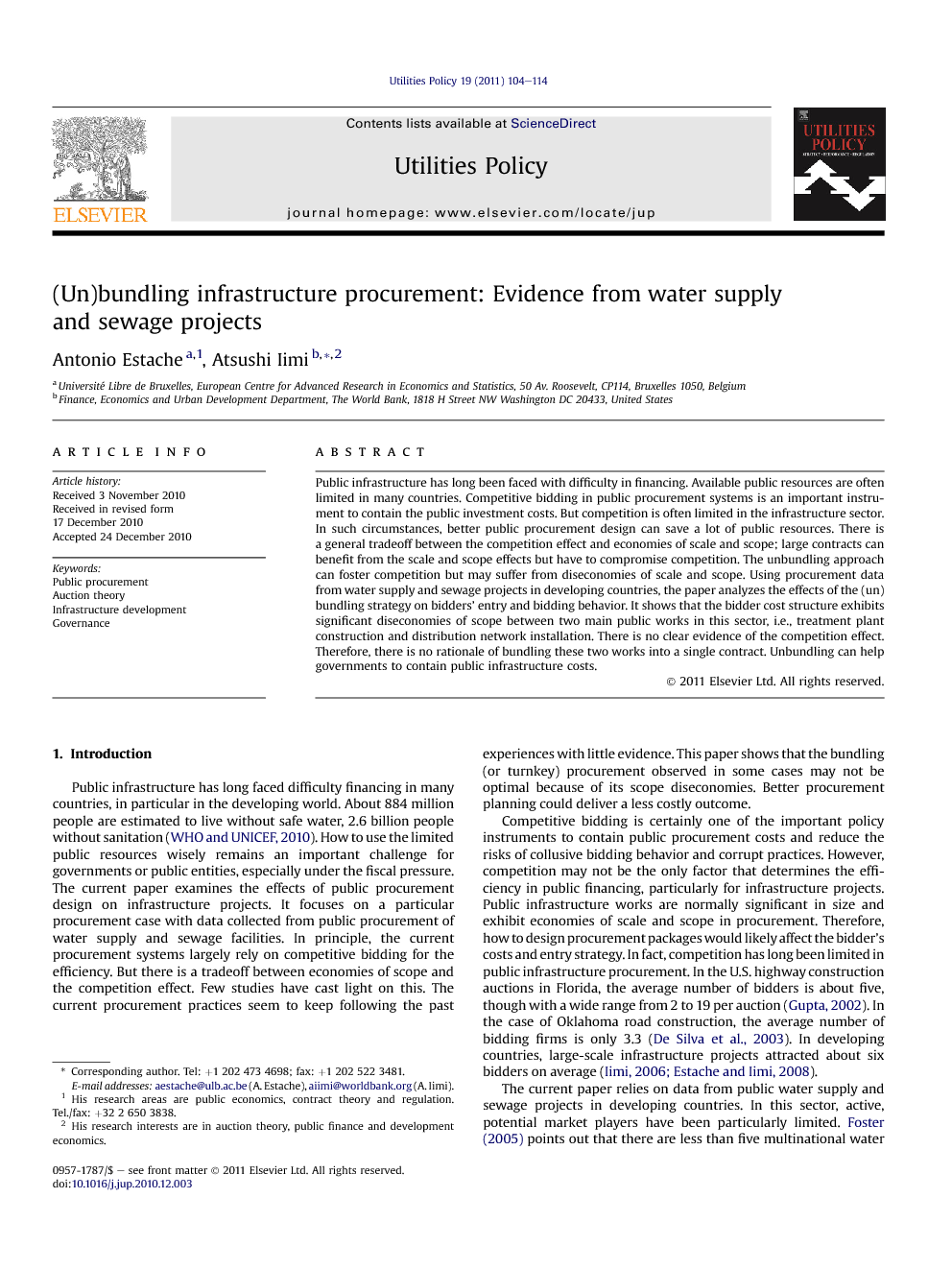 Public infrastructure has long been faced with difficulty in financing. Available public resources are often limited in many countries. Competitive bidding in public procurement systems is an important instrument to contain the public investment costs. But competition is often limited in the infrastructure sector. In such circumstances, better public procurement design can save a lot of public resources. There is a general tradeoff between the competition effect and economies of scale and scope; large contracts can benefit from the scale and scope effects but have to compromise competition. The unbundling approach can foster competition but may suffer from diseconomies of scale and scope. Using procurement data from water supply and sewage projects in developing countries, the paper analyzes the effects of the (un)bundling strategy on bidders’ entry and bidding behavior. It shows that the bidder cost structure exhibits significant diseconomies of scope between two main public works in this sector, i.e., treatment plant construction and distribution network installation. There is no clear evidence of the competition effect. Therefore, there is no rationale of bundling these two works into a single contract. Unbundling can help governments to contain public infrastructure costs.

Public infrastructure has long been faced with difficulty in financing in many countries. In particular in low-income countries, available public resources have been much limited. To provide and sustain public infrastructure services, it is of necessity required to use the available resources efficiently. Competitive bidding in public procurement systems is an important policy instrument to contain the infrastructure costs. However, the competition effect may be less effective than expected, because competition has been largely limited in the public infrastructure procurement. The water supply and sanitation sector is not exceptional. By designing a procurement package better, governments may be able to save the procurement costs. The current paper examines the tradeoff relationship between the degree of competition in competitive bidding and the size of contracts. Notably, the bidder participation is an endogenous process. Bundled works could potentially benefit from economies of scale and scope in procurement but may have to undermine the competition effect, because only a few firms may be able to undertake large contracts. On the other hand, the unbundling approach may foster the market competition but has to ignore potential economies of scale and scope. The optimality depends on the firms’ underlying cost structure. With the data on public procurement for water supply and sewage projects in developing countries, the paper shows that the bidder cost structure exhibits significant diseconomies of scope between two different public works, i.e., treatment plant construction and distribution network installation. Rather, the costs increase with these activities bundled in a single contract, especially if contracts are relatively large. According to our estimation results, the traditional competition effect may exist but remains statistically inconclusive. Therefore, there does not seem to be any rationale to support the bundled procurement in this specific case. Unbundling could help to contain public infrastructure costs. The paper also finds that the bidder entry would likely be endogenous and affected by the size of contracts and the division of contract packages. Therefore, public procurers should pay more attention to the procurement planning to stimulate the competition effect. The paper, of course, focuses on only one application; however, better public procurement design can save a lot of public resources and create fiscal space.